For real this time, decoded 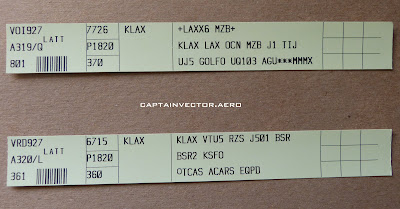 I've been having a week (well, more like two, actually - but we'll save that for another time), so you guys got some extra study time on this one. But time's up, so pencils down.

Several of you figured parts of this out, and it's also apparent that we have a couple of ringers in the crowd: welcome aboard. The photo below highlights some of the contributing factors: 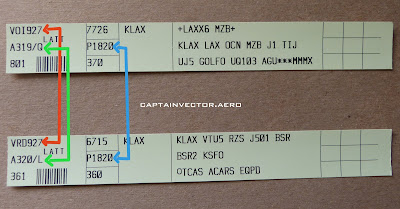 Decoded, this is a pair of departures that share a flight number (927) and departure time (1820z, which is 10:20 AM PDT). They also feature very similar aircraft types (A319 & A320) and ICAO airline identification code (VOI & VRD).* For the purposes of our tale, the other information on the strips is immaterial.** But that's not where the story ends: 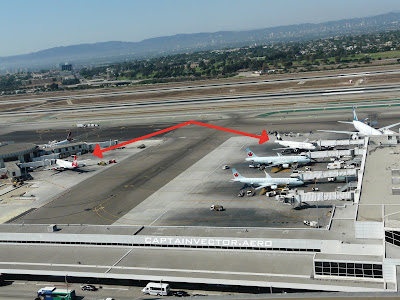 Because this is where the two airplanes are parked on the field: Volaris operates out of Terminal 2, and Virgin America is right next door at Terminal 3. Which means that not only do they have very similar-looking strips, said strips are going to be adjacent on the ground controller's counter, and both aircraft will be on the same ground control (and subsequently tower) frequency. As you can also see from the above photo, both aircraft can be together on the same section of taxiway, and I have personally seen these two flights one right after the other as they taxi to the runway.

Thus, in this scenario we have two issues: The similar-sounding callsigns, as well as the similar-appearing strips that will be close to, if not next to, each other at the ground (and perhaps the tower) controller's position. Each poses its own challenges, the end result in each case that somebody may get confused about who's who and what they're doing (or supposed to be).

The ground controller on the north side of the airport is generally the first controller to talk with both aircraft, although the strips will originate at the clearance delivery position. Because of the many similarities between the strips, it's very easy for the ground controller to grab the wrong strip when one of the pilots calls for push. If not caught right then, the ground controller may then form his/her taxi plan using the wrong flight plan information, which could then result in an aircraft being sent to the wrong runway, or airplanes reaching the runway in an unworkable sequence. If still not detected, the confusion could spread to the tower controller, who may then put an airplane on the runway that won't be able to depart. Or, worse yet, the airplane will depart and then turn the "wrong way" - and into the "wrong" sector's airspace. Or worse still - right into another aircraft. A bad day ensues for all.

By the time the airplane gets onto the runway, however, at least three controllers should have looked at the strip, the data tag on the ground radar, and (if the weather allows) the airplane itself. Many chances for this mis-match to be detected and straightened out. At some level, it always has been. Even so, we're working with the companies involved to see if one or the other could be assigned a different flight number, which would resolve the issue for good.

As some of you have described in your comments, we have radio phraseology techniques to keep similar-sounding callsigns sorted out (discussed below), but it still requires extra diligence on both ends of the radio - and with one of the players being a foreign carrier (meaning English is not their native language), it's easy to see how things may go awry.

This particular instance arises almost daily at LAX, and so most of us are aware of it and each has his/her own way of dealing with it. One of the more common techniques is to find some other airplanes to put between the two so that they can't both be at the runway at the same moment.

Once they are in the air and the tower controller is done with them, the situation is resolved: Virgin America turns north for San Francisco and calls one radar controller, while Volaris turns south for Mexico City and switches to a different one.

As you can see below, however, these two are not the only flights that do this. I personally received this pair of aircraft back-to-back while working the tower frequency on the south side a couple of weeks ago: 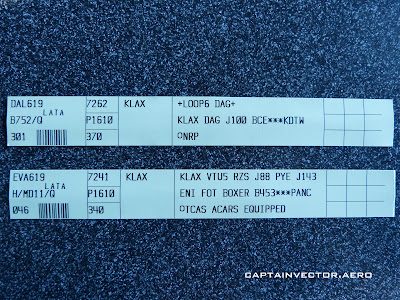 Similar callsigns are a fact of life at someplace like LAX. As you can see, though, this pair doesn't have as many similarities as the first pair, and is in fact more representative of a typical similar callsign scenario. The aircraft types (B752 & MD11) and parking locations (Terminal 5 & South Cargo) have a greater disparity, although both aircraft still came to be on the same ground and tower frequencies concurrently.

The standard technique for dealing with aircraft with similar callsigns is to advise each aircraft about the other:

After one acknowledges, then the other:

In subsequent transmissions to either aircraft, the carrier name may be appended to the end of the callsign for emphasis:

It's also considered good practice to warn the next controller if you're about to give him a couple of aircraft with similar callsigns, as well as whether or not the pilots have already been advised.

* - The FAA uses ICAO identifiers for flight plans; in the IATA system, these two are Y4 and VX, respectively. We don't use the IATA identifiers because in some cases they can be confused with aircraft registrations. Example: The Honduran airline Aerolineas Sosa has been assigned the IATA code "P4". However, aircraft registered in Aruba carry registrations beginning with "P4". These would appear identical on a flight plan strip, leading to inevitable confusion in radio communications.

** - For those with curious minds, the rest of the Volaris strip decodes as follows:

As promised, here's a full-route strip for you to peruse. Compare to the strips in the earlier photos. More information, but this format is not nearly as easy to read:

Posted by CaptainVector at 12:27 PM