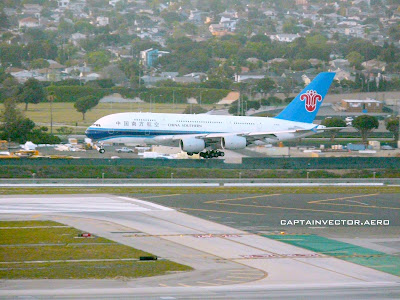 We are barely a week into the summer travel season, but without a doubt things are on the rebound. Last month, we exceeded 1300 ops (in one day) for the first time since the New Year's weekend, and then a week after that milestone we broke 1400 ops for the first time in over a year. This week, we went over 1500 operations. While that is still hundreds of operations less than what LAX traditionally would be doing at this time of year, we are the busiest that we've been in fifteen months.
The most obvious sign of the increase in air travel is the resumption of daily traffic jams in and around the airport. Thanks to all the on-going construction around the terminal area, these are made even worse by the severe reduction in short-term parking. Several parking garages have entire levels that have been blocked off for construction. This includes the control tower parking lot, which has been reduced to about a quarter of normal capacity. I was personally about twenty-five minutes late to work this morning because the garages at Terminals One, Two, Five, and Six were all full. I finally was able to sneak into a spot at the far end of the roof of the Terminal Seven garage. This is so far from the control tower that I was only able to see my car using the binoculars: 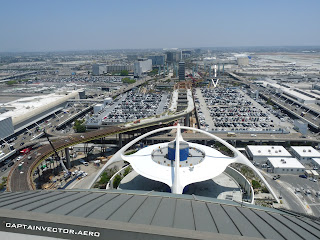 The other noticeable sign of resuming air travel is the increase in the number of arriving flights who have to wait for their gate to become available. Delta and Jet Blue are the primary offenders at the moment, but Alaska and American have been getting in the game too; I even had to hold an American Eagle regional jet today for an occupied gate at their separate terminal - a situation that we haven't had to contend with in over a year.
The opening shot is something of a teaser though; A380 operations here have not picked up yet. China Southern has been the only regular A380 operator at LAX for nearly a year now. We are expecting Emirates to resume A380 service here later this month, but so far no other carriers have announced that they are resuming A380 operations at LAX. We do have a pair of Qantas A380s in long-term storage here on the Qantas maintenance ramp at the west end of the airport, and another Qantas A380 was brought in from storage in Victorville (northeast of Los Angeles, on the edge of the Mojave desert) recently for some scheduled maintenance. There recently has been news of another issue facing Qantas A380s in storage here in the California desert: rattlesnakes and scorpions
It's not just air travel that's coming back; Hollywood is returning to the movie theaters. Here is the first airliner I've seen in quite a while promoting a new movie: 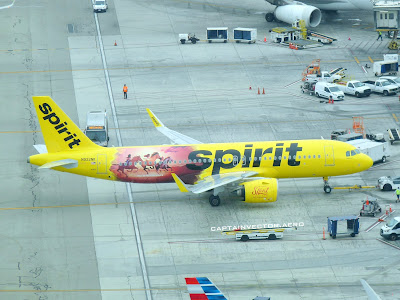 Posted by CaptainVector at 9:02 PM No comments: