First off, if you haven't seen it already, take a look at this recent article in USA Today:
USA Today article
As the article states, reported air traffic errors in 2010 were up over 80-percent as compared to 2007. Are we really having that many more losses of separation now than then? In short, I don't think so. As the article mentions, the FAA states that main cause for the greater numbers is because more errors are being reported. There has been a culture shift in the FAA over the last couple of years that now encourages the reporting of errors, whereas in years past it was not so. We now have a program which allows controllers to "self report" errors without fear of reprisals. Many airlines have similar programs; the intent is to uncover causes and system shortcomings that contribute to errors occurring, with an eye towards prevention in the future.
The article suggested that a heavy training load could be an alternate cause for the increase in errors. To be sure, there has been an influx of new controllers as the controllers hired in the wake of the PATCO strike come up for retirement. At LAX, like many other facilities, we've been in constant training mode for several years now. This state of affairs is likely to continue for some time to come, but that's part of what we do. There have been great strides in simulator technology, and LAX trainees get to start their training in the sim, but the sim doesn't yet offer the complete air traffic experience that comes from standing in the tower cab, plugged-in and talking to real-live moving airplanes. And so the experienced controllers also serve as instructors. There's nothing new about that; it's part of the job description. But I don't believe that we're suddenly having more errors simply because we're training a new controller work force. The whole point of having the experienced controllers acting as instructors is to prevent errors from occurring while the trainee learns. Sure, sometimes we have to scramble to make that happen, but that's where the experience part comes into play. We call these times "learning opportunities" and "educational moments."

If you watch the video embedded in the article, you'll hear mention of new controller trainees being sent straight to big, busy facilities such as LAX. That was the case for a while, but no longer - nearly all of the "new hires" that came straight to LAX, for example, were sufficiently overwhelmed that they're now pursuing their ATC careers at facilities more appropriate for them to learn how to be air traffic controllers. We are still getting new controllers at LAX, but they're coming to us from other towers, which means that they already have some experience and have earned their promotions to the big league.

So while the headline screams that errors are way up, implying that your safety is now at a greater risk, the reality of the situation (as I see it) is that things are, if anything, better now than in 2007. As comedian Shelley Berman once said, "Flying is the safest way to fly."

Posted by CaptainVector at 9:29 PM No comments:

Okay, so it's been another week since I've posted. Now you know why: After an arduous tech week at the Long Beach Shakespeare Company, we opened Othello Friday night to a sold-out crowd. It's a rock-solid cast that's already received good reviews, so if you're in the area I encourage you to come down and see the show. Huffington Post Review

The LBSC wasn't the only thing happening in town this weekend, as this shot of the Atlantic Aviation ramp shows: 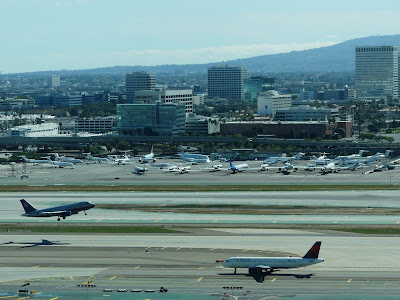 LA hosted the NBA All-Star game and the Northern Trust Open golf tournament this weekend; at one point I counted nearly 40 aircraft on the Atlantic ramp - there's close to a billion dollars' worth of aircraft in this picture! Next week is the Oscars . . . 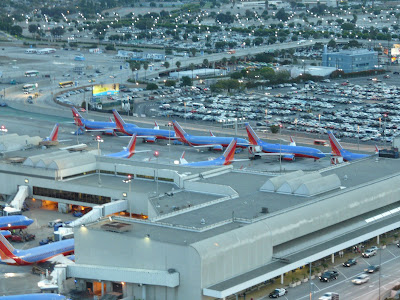 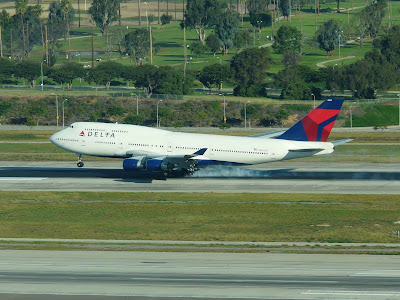 One other news item from this weekend: Delta has started service between LAX and Tokyo's Haneda airport, using B747s. That doubles the number of carriers we have going into Haneda: A few months back, All Nippon introduced daily service to Haneda in B777-200s.

Posted by CaptainVector at 11:53 AM No comments: 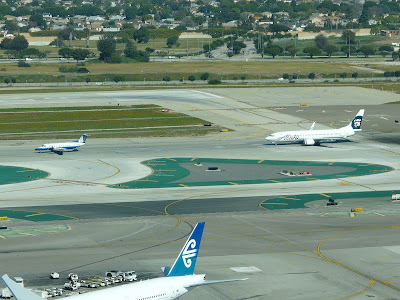 I know it's been pretty quiet around here for the last week, so here's a little something to start off this week. I took this shot this morning, and invite your suggestions for captions. Post them in the comments.
Posted by CaptainVector at 8:49 PM 8 comments:

Lull in the action

I've been "blessed" with four mid-shifts in a week's time, so expect little action here for a while. For the moment though, here are a couple of shots from yesterday for your entertainment: 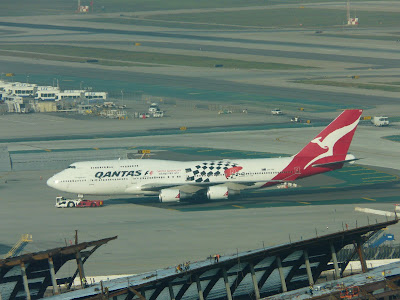 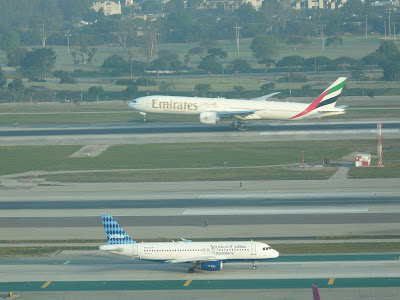 Verizon may be getting the iPhone, but JetBlue is shilling the BlackBerry (shouldn't that be the BlueBerry?)
Posted by CaptainVector at 8:19 AM 1 comment:

Posted by CaptainVector at 10:13 PM 3 comments:

A couple of you have recently sent in comments that linked YouTube videos. For those who might not have seen them, here they are:


Thanks to getjets and Ben, respectively. Enjoy!

And now, for something completely different:

Talk about fully loaded!
Posted by CaptainVector at 7:50 AM 7 comments: