Revealed: What's wrong with this picture? 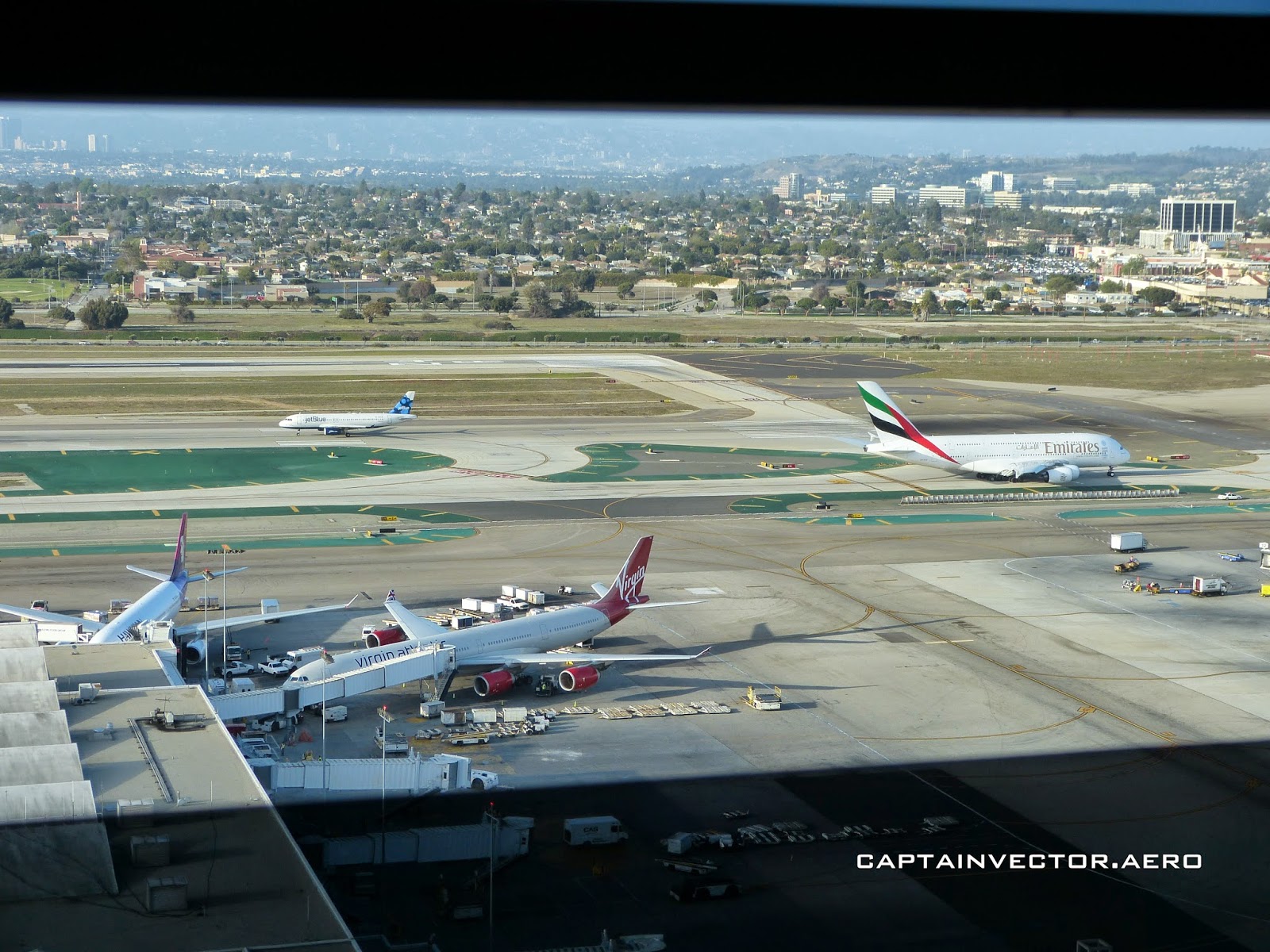 A good number of you responded to this edition of WWWTP. Thanks to one and all for once again demonstrating the popularity of this series. I regret that it has lately become a rarity. So, what is wrong with this picture? I'll start by showing you a shot from a minute or so before the picture in question: 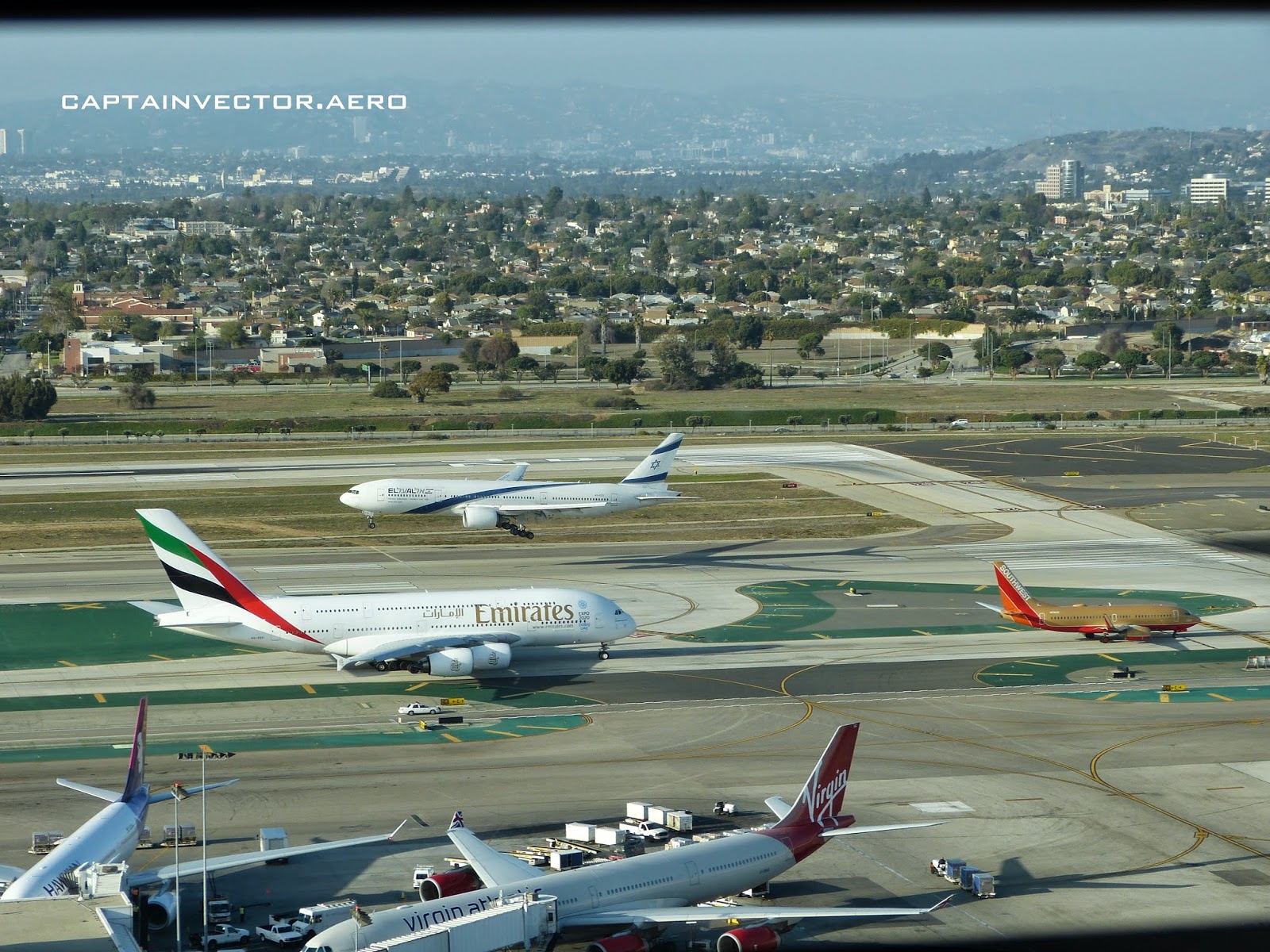 Although it's not critical to the story, it does provide a little background. Here we see a couple of aircraft on Taxiway E, waiting to depart, while an El Al B777 is about to touch down on Runway 24  Left. Southwest is first, holding short of Taxiway V, with an Emirates A380 behind. Here are a couple more shots, unrelated except that they show how most aircraft access Runway 24 Left via Taxiway E for departure: 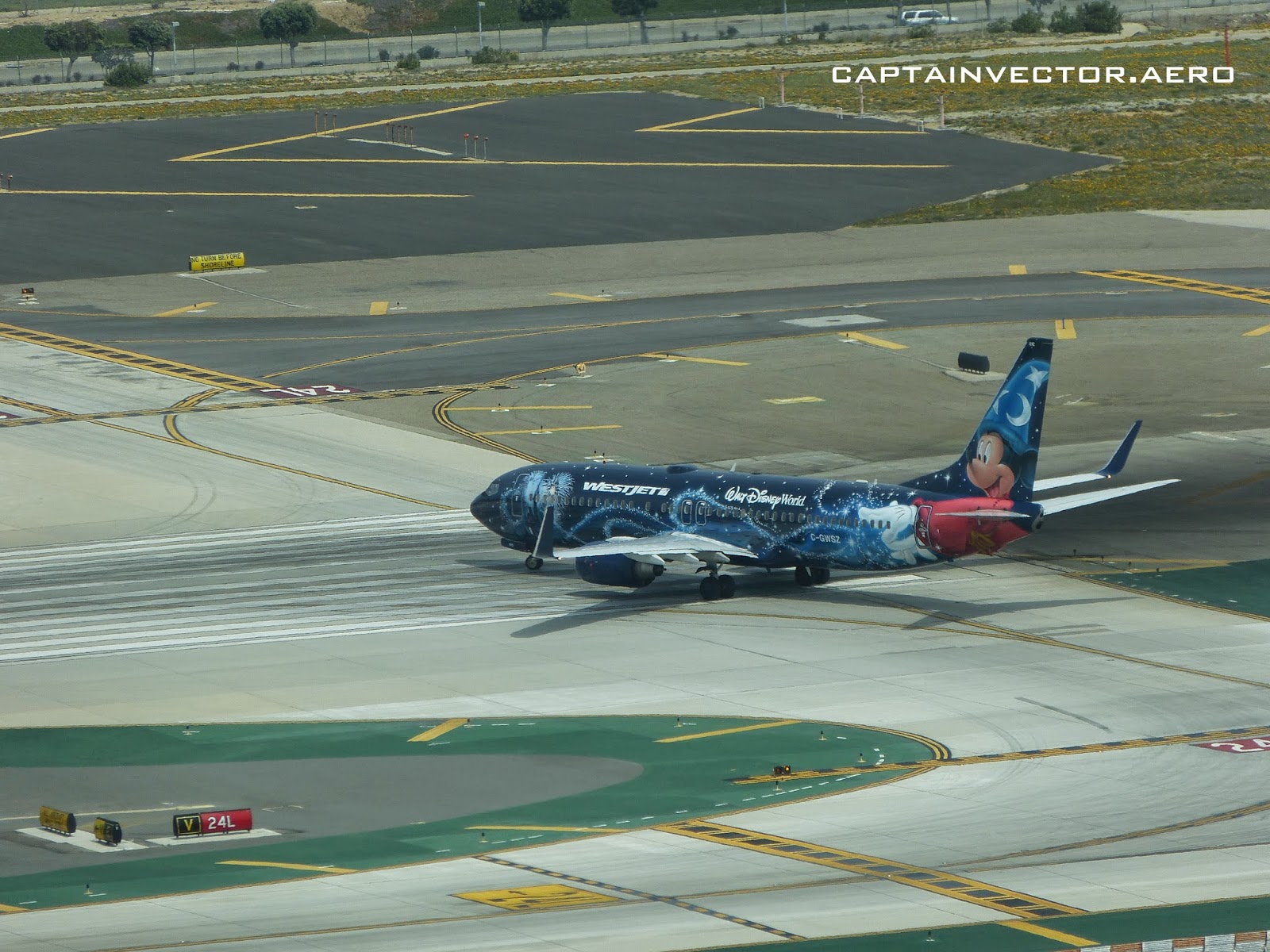 Now back to our story: 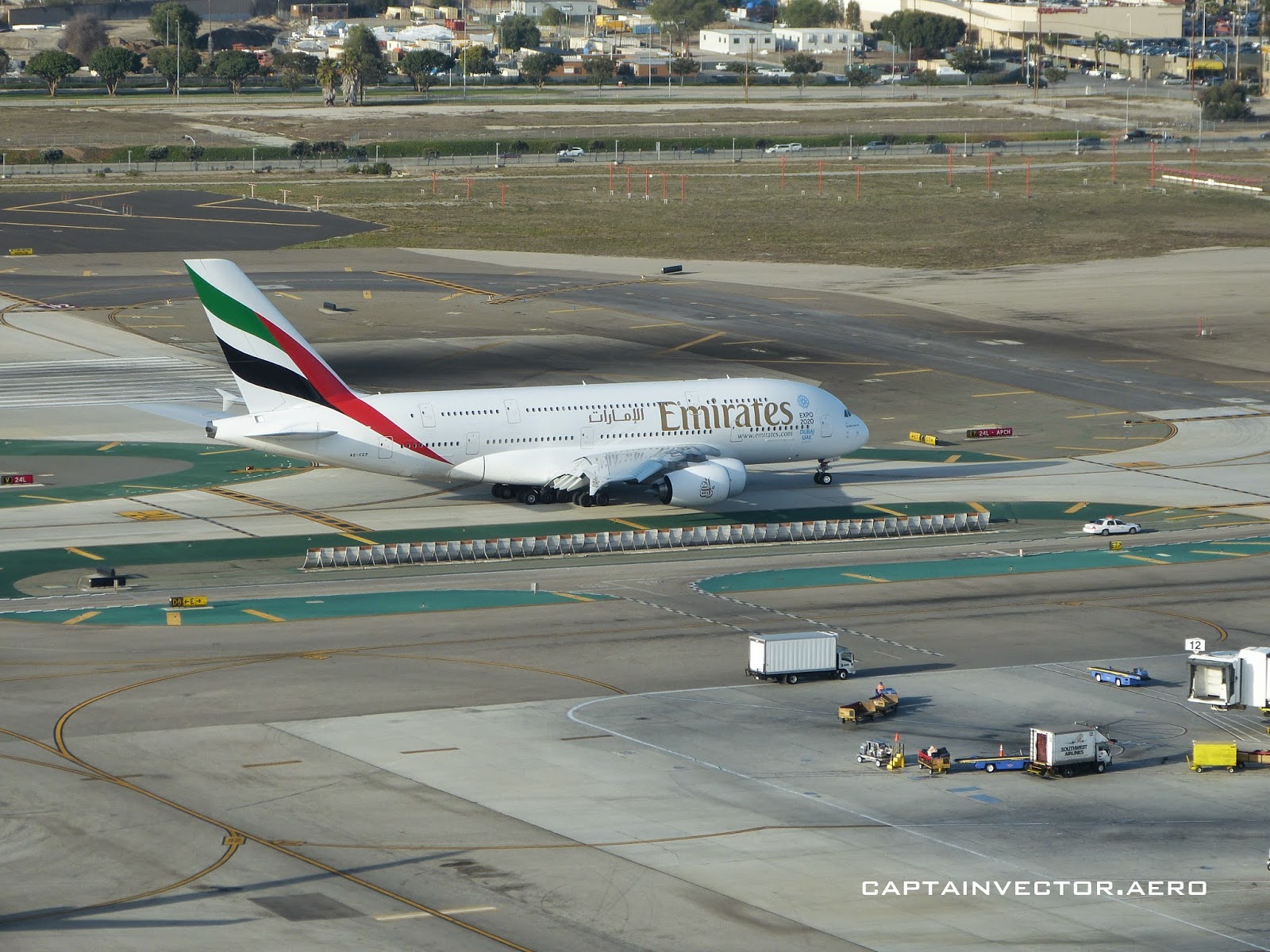 This photo best illustrates what happened here: the A380 has gone past Taxiway V, which is the entry point for Runway 24 Left departures. Taxiway E does continue on, which can (as in this case) mislead pilots into thinking that they have not yet reached the full length of the runway. To illustrate, refer to this LAX airport diagram: 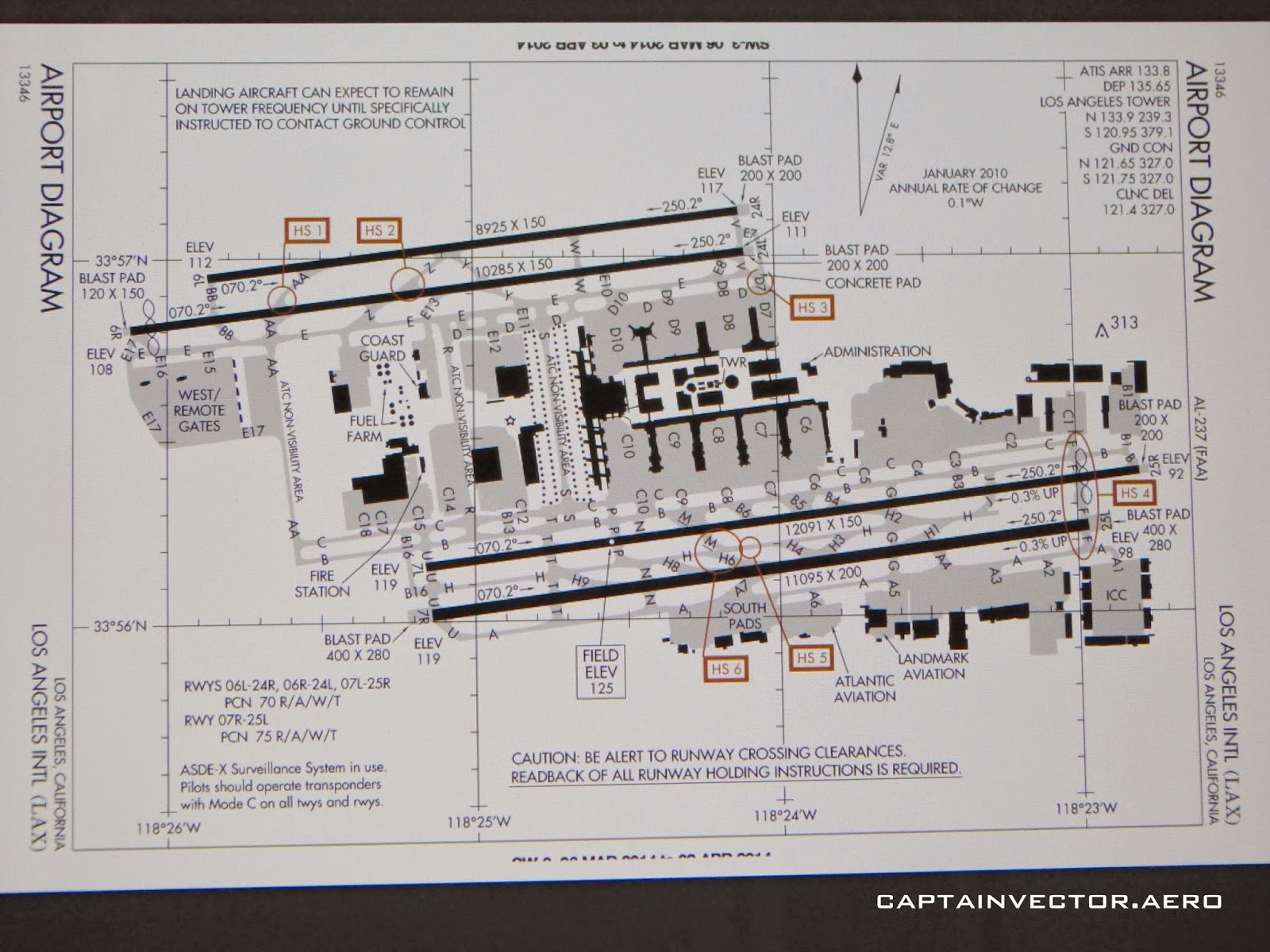 This is the specific part of the diagram, showing the east end of the north complex: 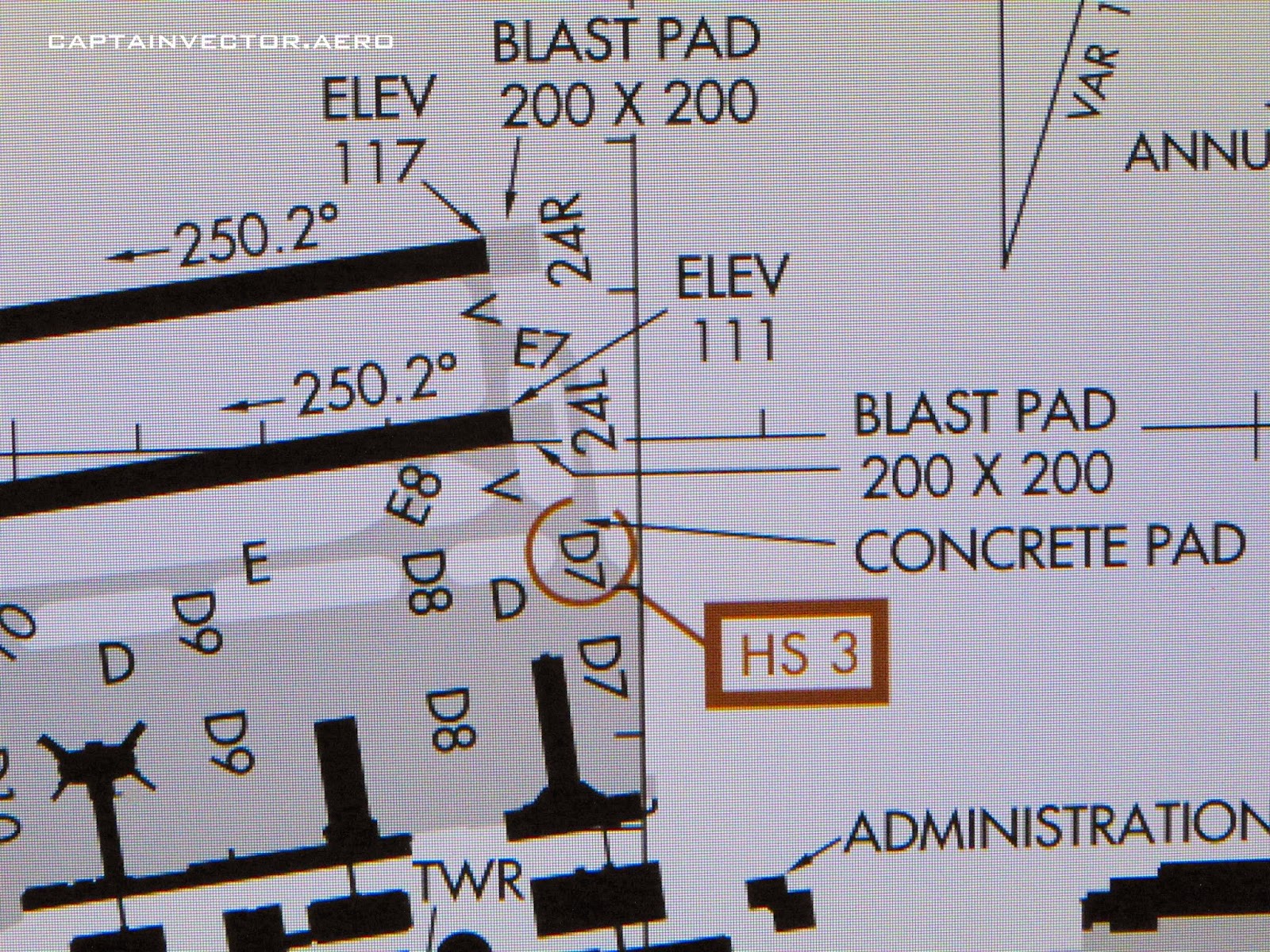 As you can see, Taxiway E runs parallel to Runway 24 Left, and Taxiway V is the entry to the beginning of both Runways 24 Left and Right. However, Taxiway E continues beyond Taxiway V to reach Taxiways D7 and E7. Taxiway D7 gives access to the east side of Terminal One, while Taxiway E7 goes around the approach end of Runway 24 Left to intersect Taxiway V between the runways. So far, so good. Now, however, take a look at this diagram: 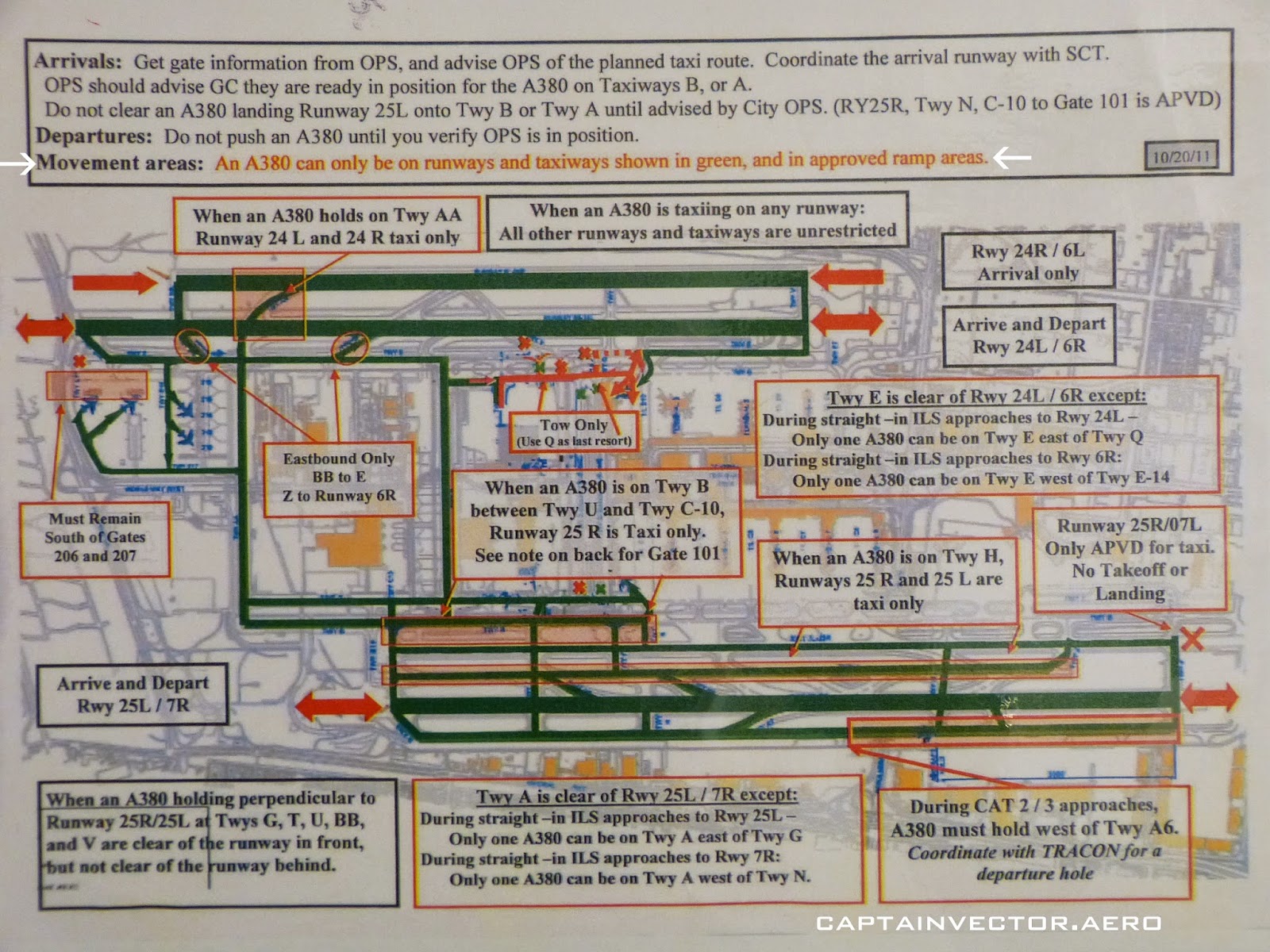 This diagram shows the permissible runways and taxiways for A380 and B747-800 aircraft movements at LAX. Take a moment to read the "Movement areas" note, then take a look at this piece of the same diagram: 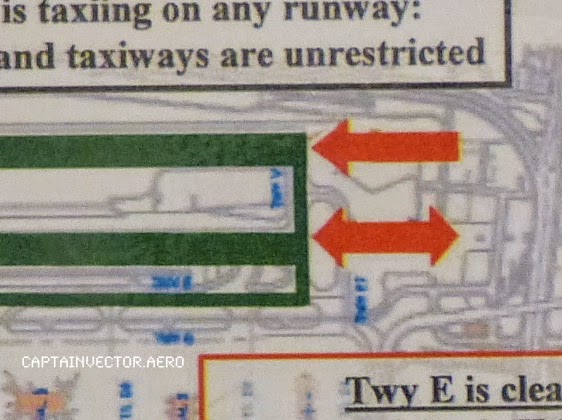 As above, this specific piece of the diagram shows the east end of the north complex. Both runways are shown in green, indicating that they are suitable for A380 operations. Taxiway V and Taxiway E west of Taxiway V are also green. Here's the catch: the green portion of Taxiway E stops at Taxiway V. While other aircraft can taxi past Taxiway V and turn on D7 or E7, A380s can not go beyond that point because there is insufficient wingtip clearance and pavement strength. So, as several of you noted, this has to happen: 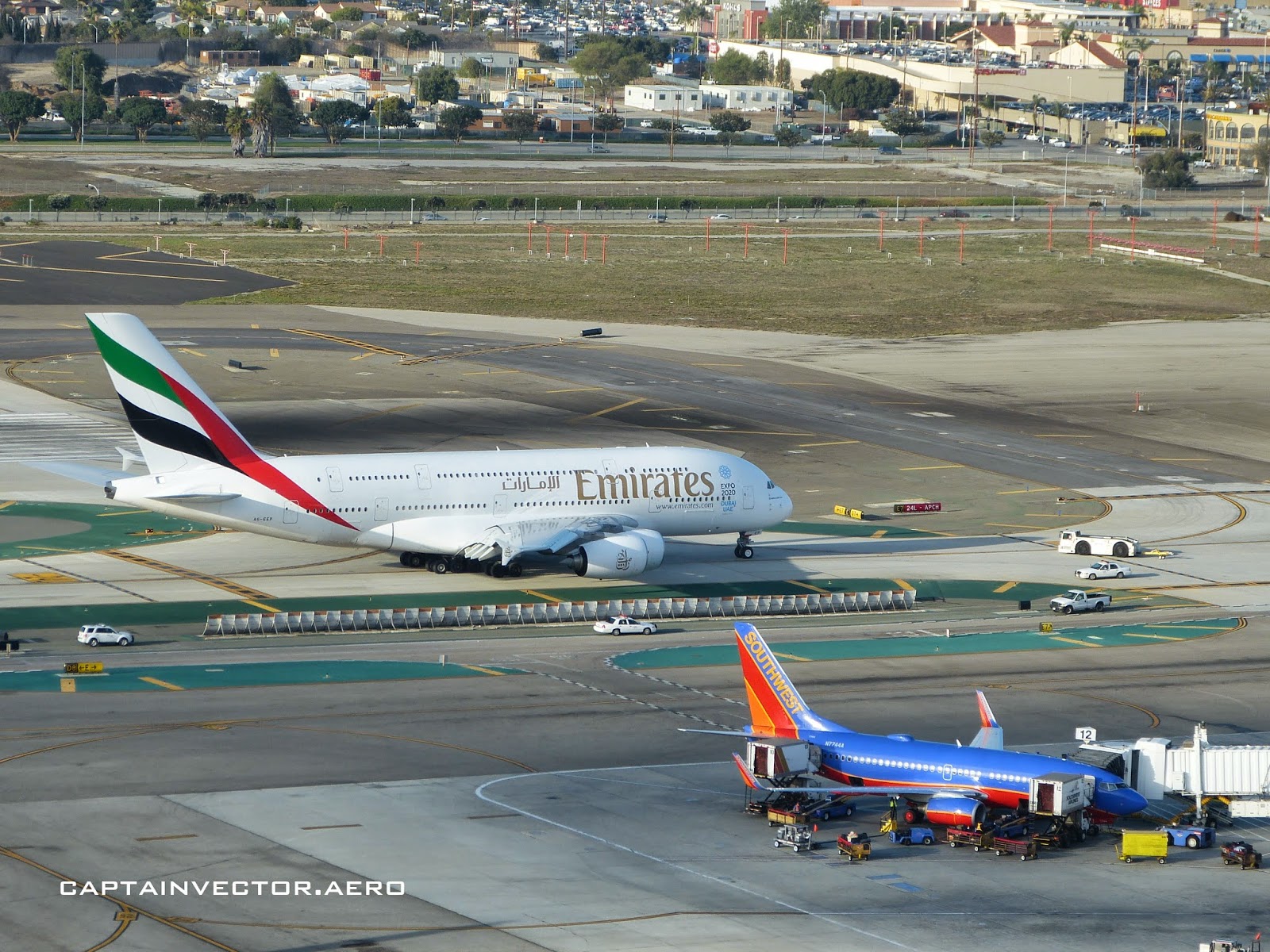 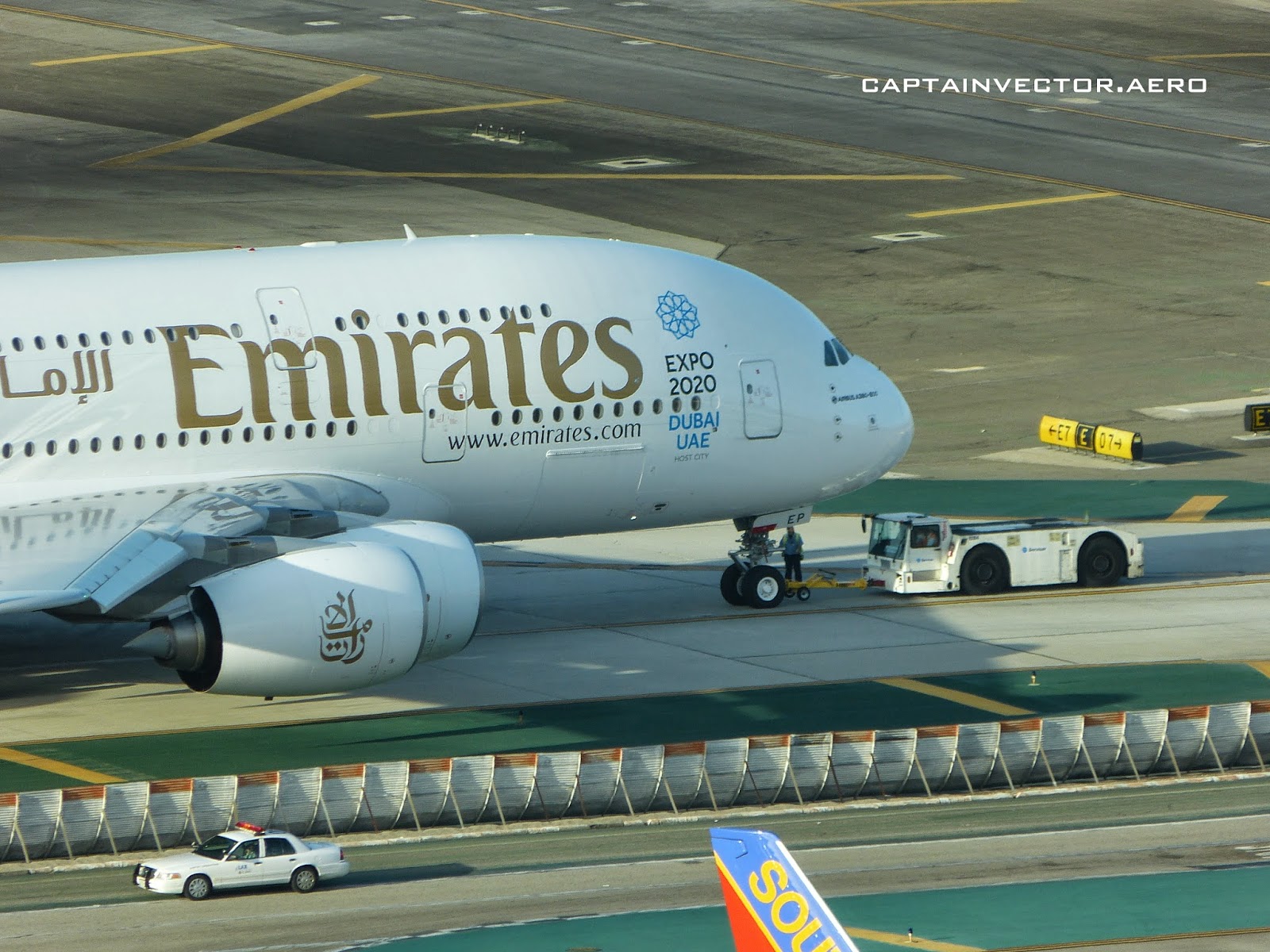 Meanwhile,  subsequent departures are obligated to use Taxiway E8 to access the runway, as seen here: 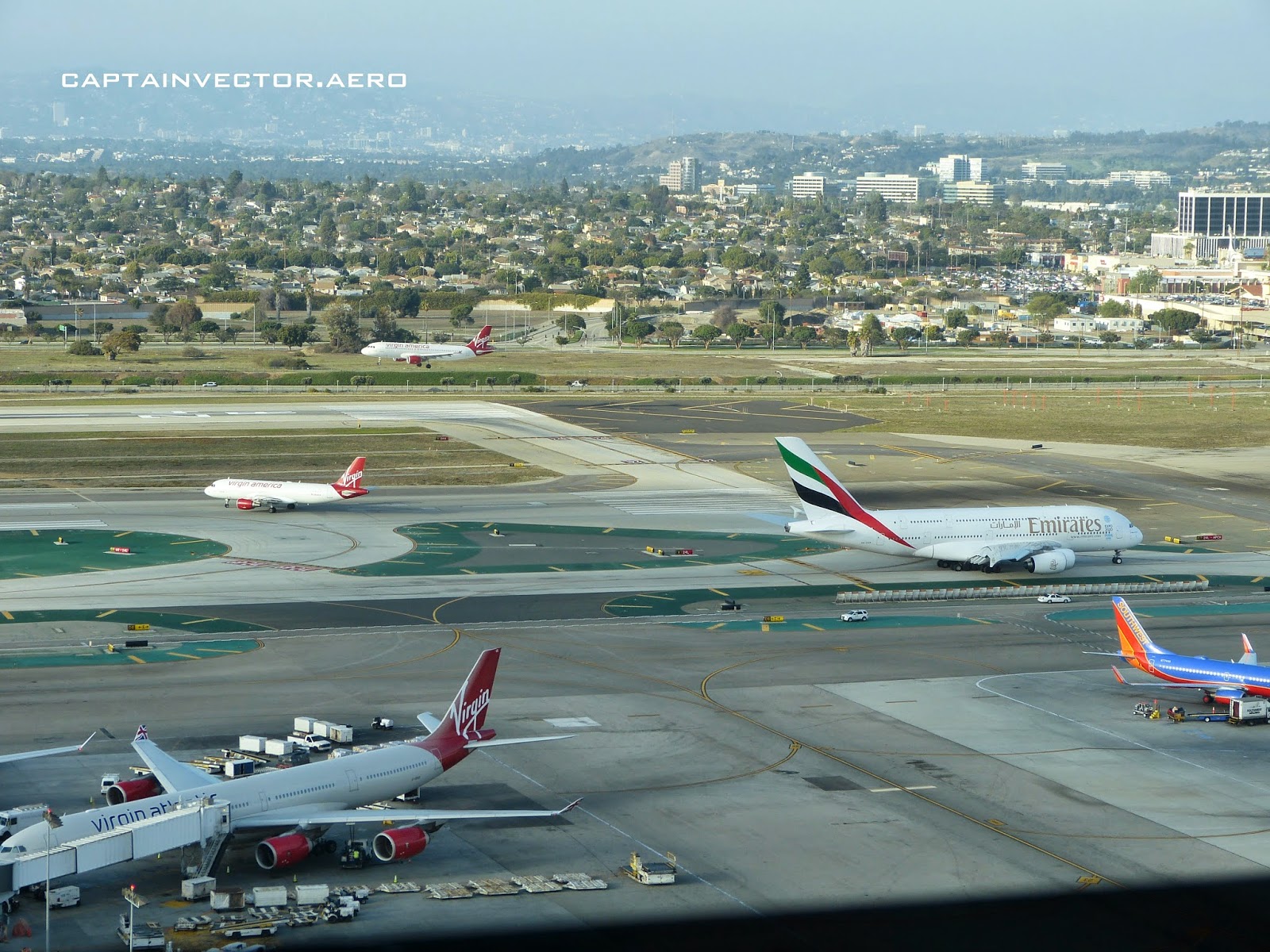 Finally, about fifteen minutes later, the tug's duty is done and the A380 is in a position to enter the runway: 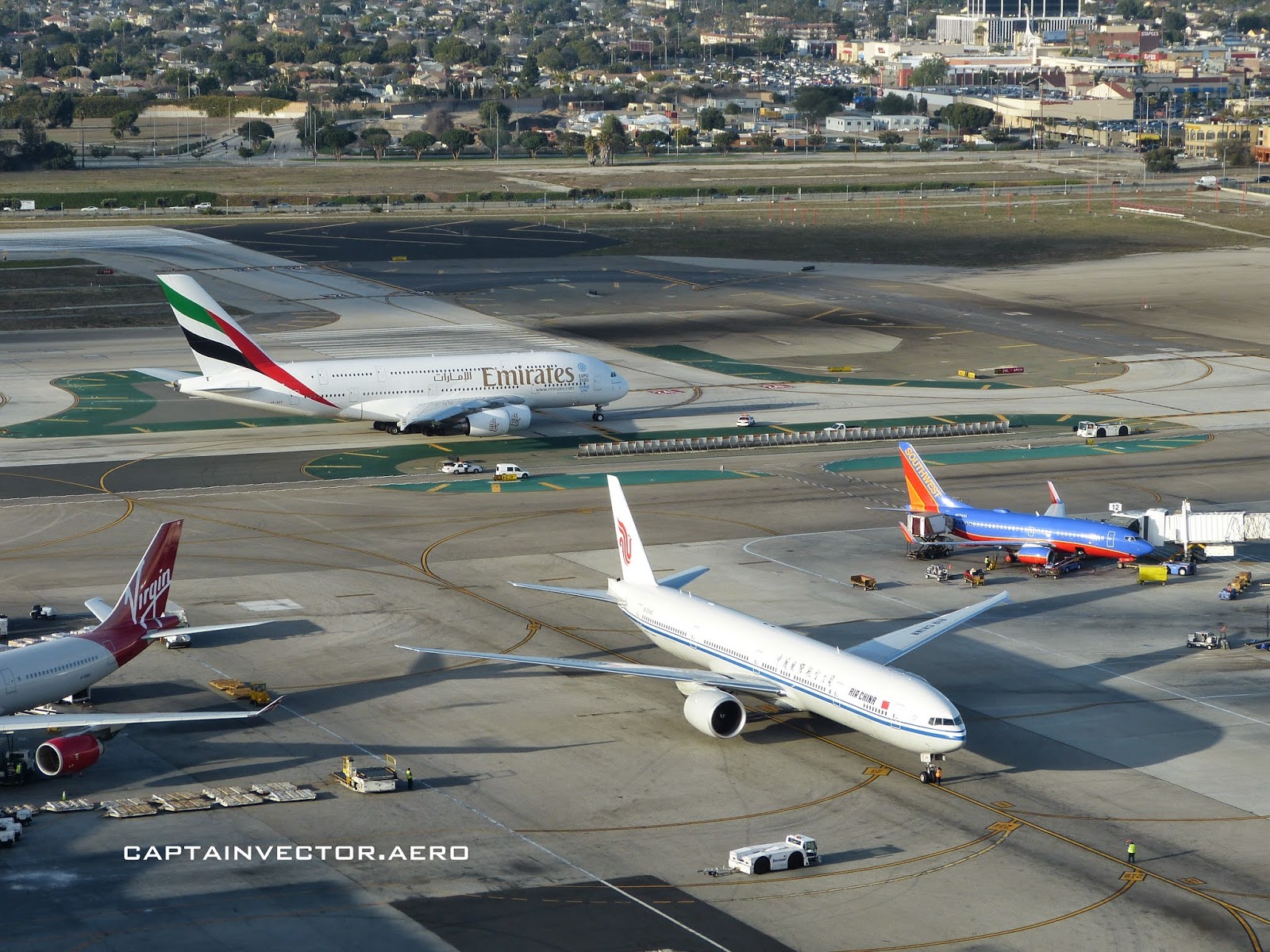 As several of you said, this is not the first time that this has happened, nor the first time I've shown it to you. Nearly every day at LAX, a pilot misses the entry point for Runway 24 Left. The difference is that nearly any other airplane can utilize D7 or E7 to recover.

Bonus points for those who noted the Airbus family photo!
Posted by CaptainVector at 10:52 PM 2 comments:

What's wrong with this picture? 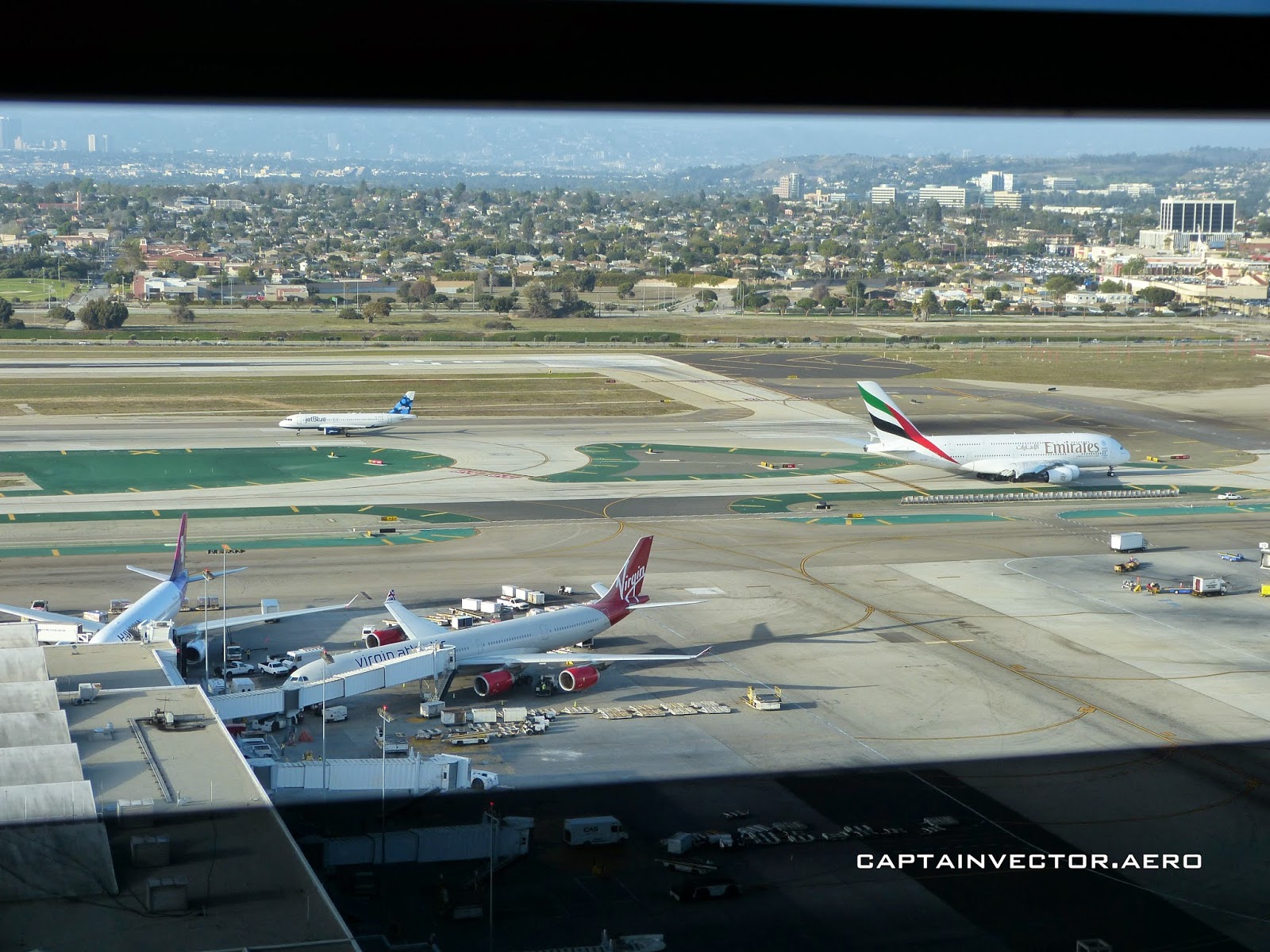 Time once again for everybody's favorite feature. Coincidentally, the subject of this photo came up recently in a family conversation. So, what's wrong with this picture?
Posted by CaptainVector at 11:21 PM 21 comments: 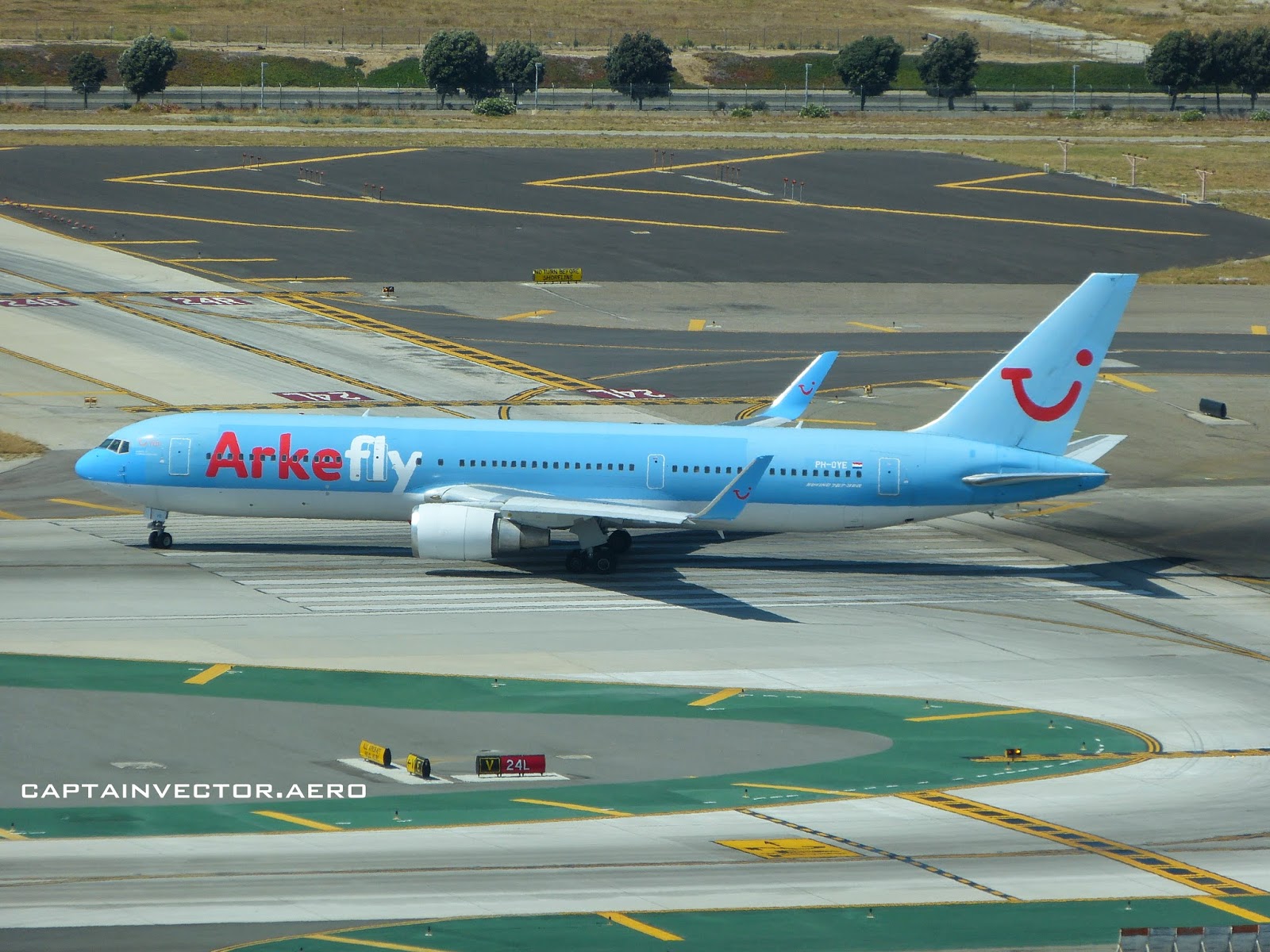 Our next Terminal Two carrier is another seasonal operator: Arkefly offers B767-300 service from Amsterdam during the summer travel season. 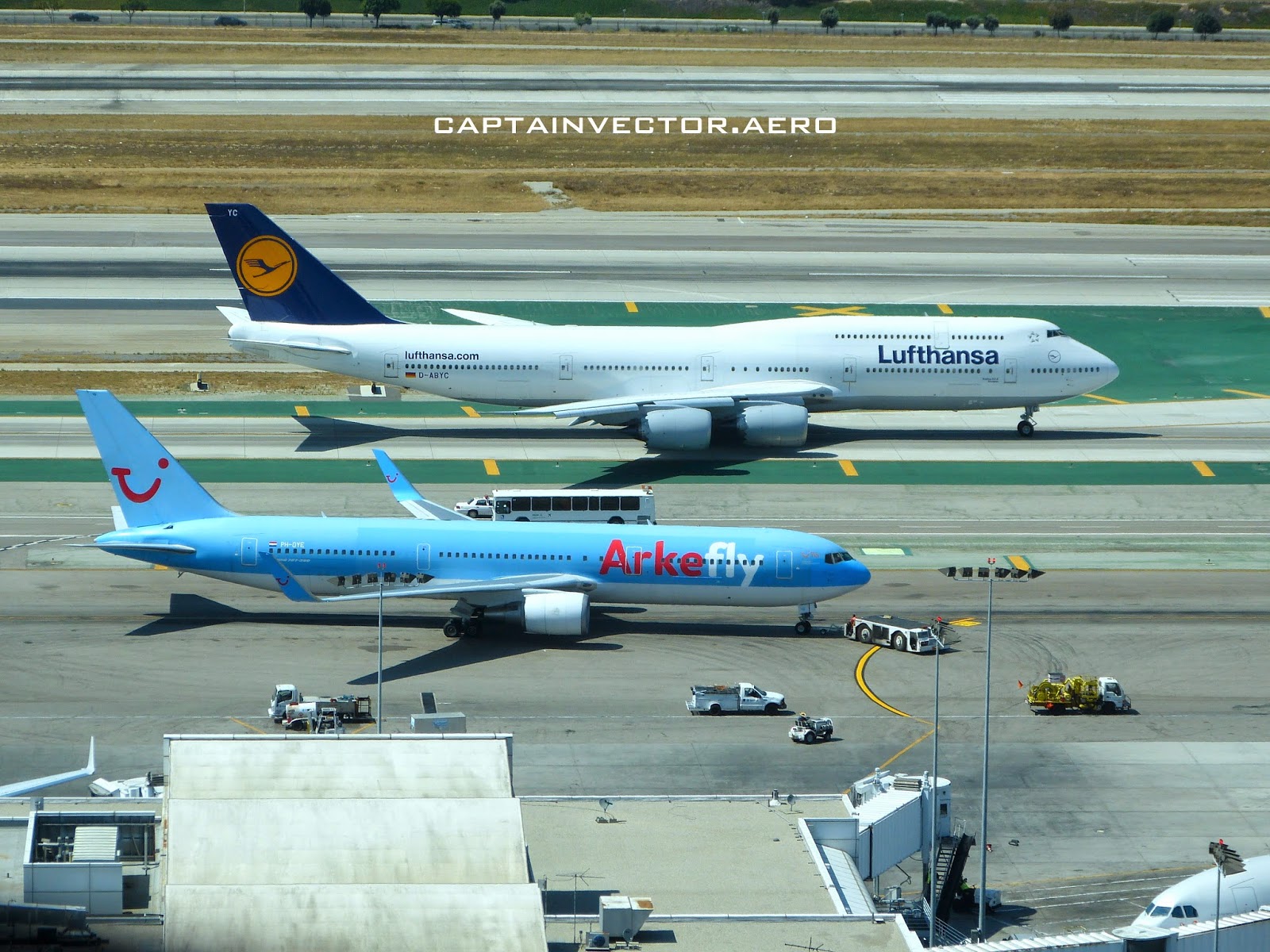 Posted by CaptainVector at 12:15 AM No comments: 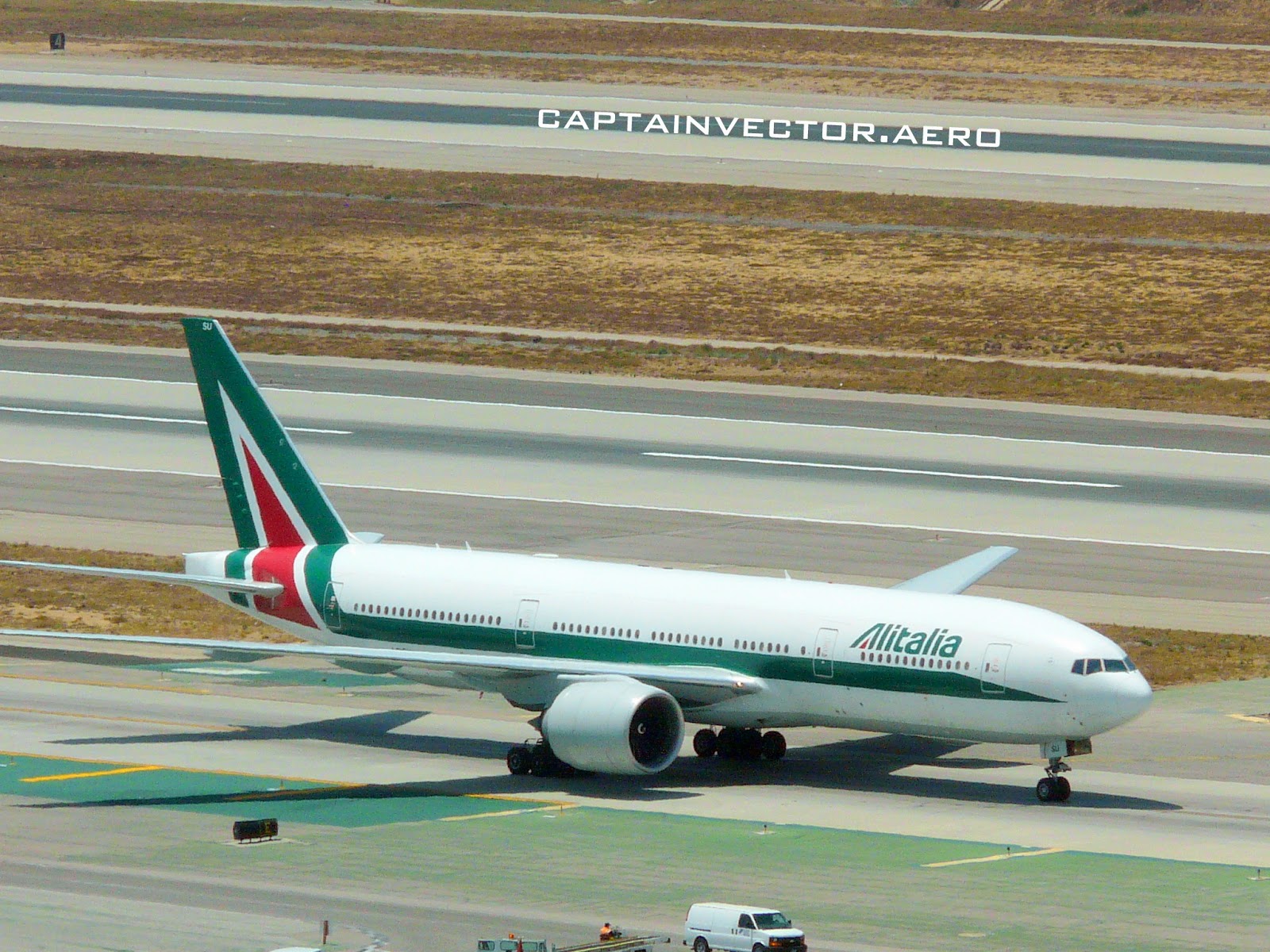 The next denizen of Terminal Two is a part-timer: Alitalia is a seasonal visitor to LAX, operating B777-200 service from Rome during the summer travel season. The eleven-hour flight is the only direct passenger service between LAX and Italy. 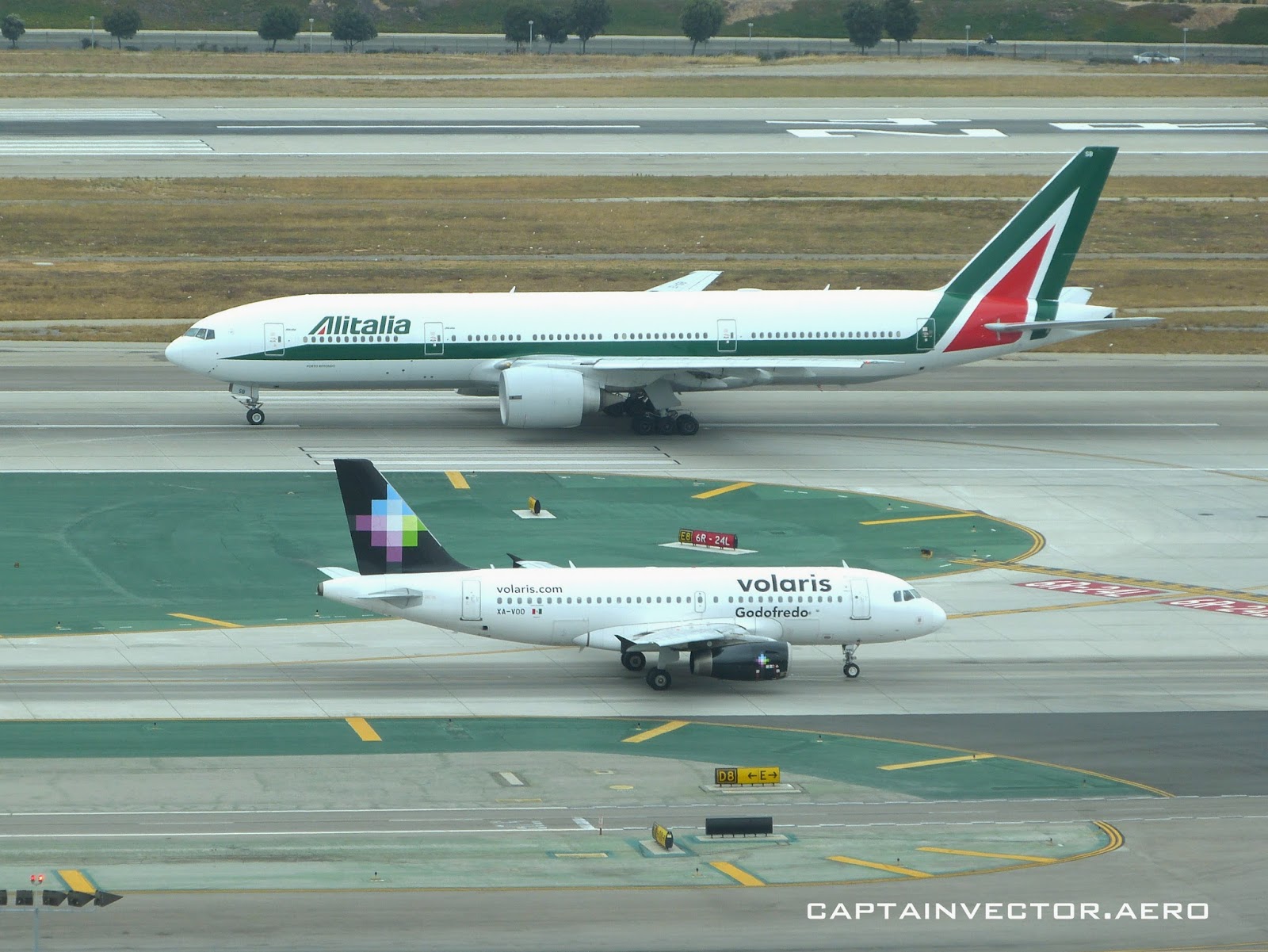 Posted by CaptainVector at 12:07 AM 2 comments:

Who's who: Air New Zealand 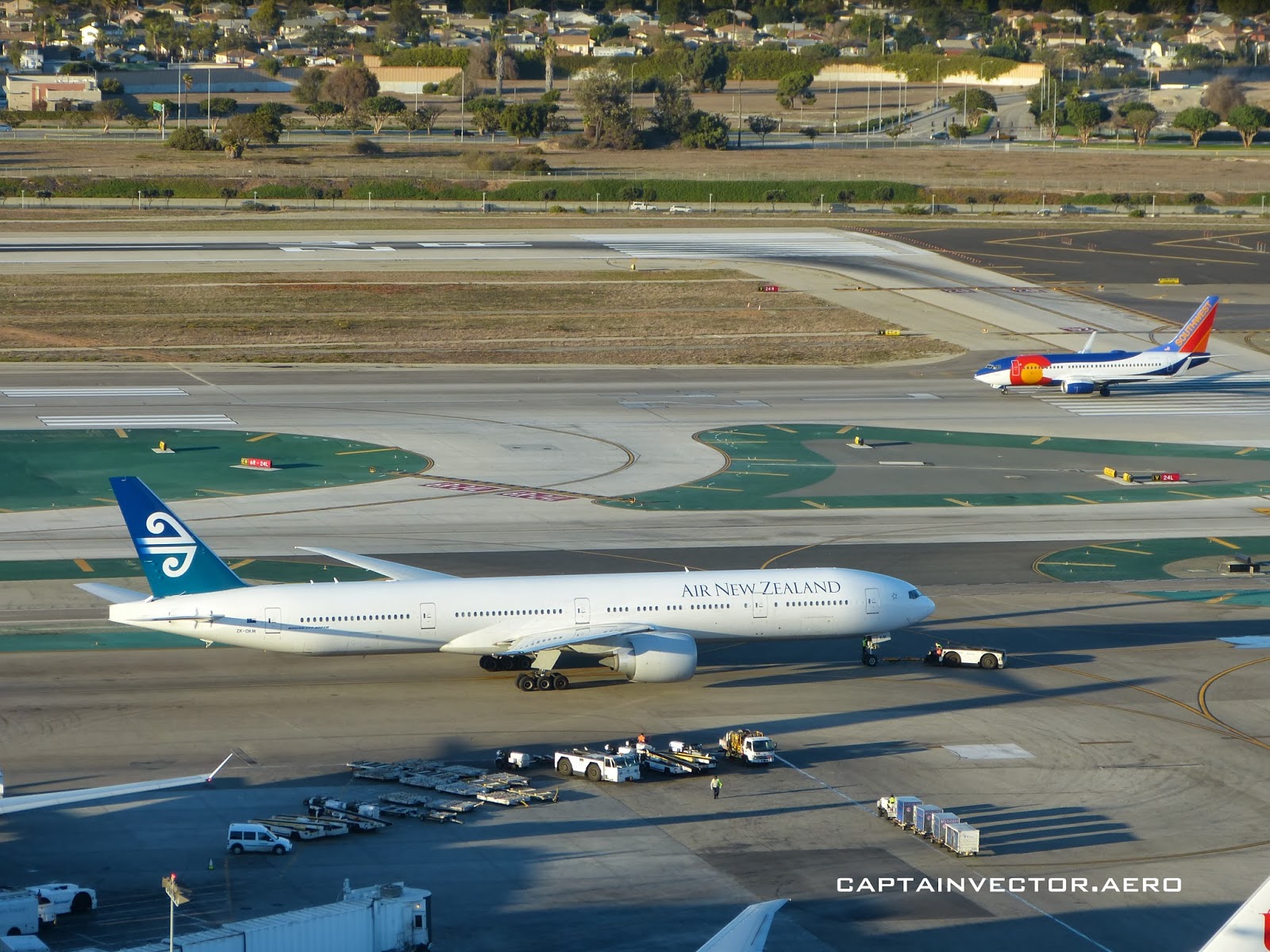 Time to continue our tour of the carriers at Terminal Two. Air New Zealand (callsign: New Zealand) is the busiest heavy jet operator there, sometimes with three aircraft on gates at once. Most of those aircraft are B777-300s, although we do see a few -200s as well. At the moment, Air New Zealand is the only carrier offering direct service from Los Angeles to Auckland. They also have a daily flight to/from London Heathrow. Once a week, we get a B767-300 from/to Raratonga in the Cook Islands - although this flight has occasionally used a B777-200. 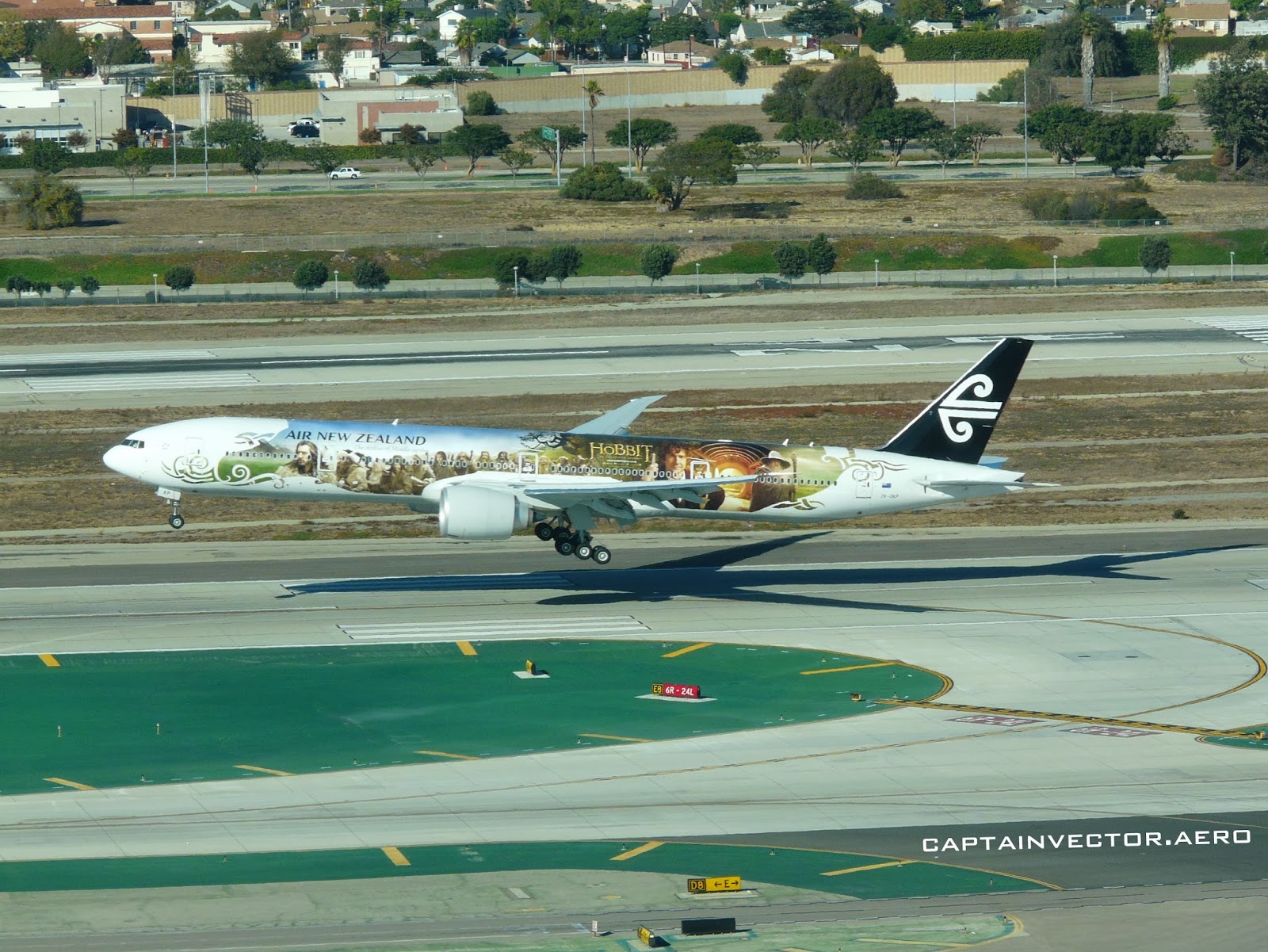 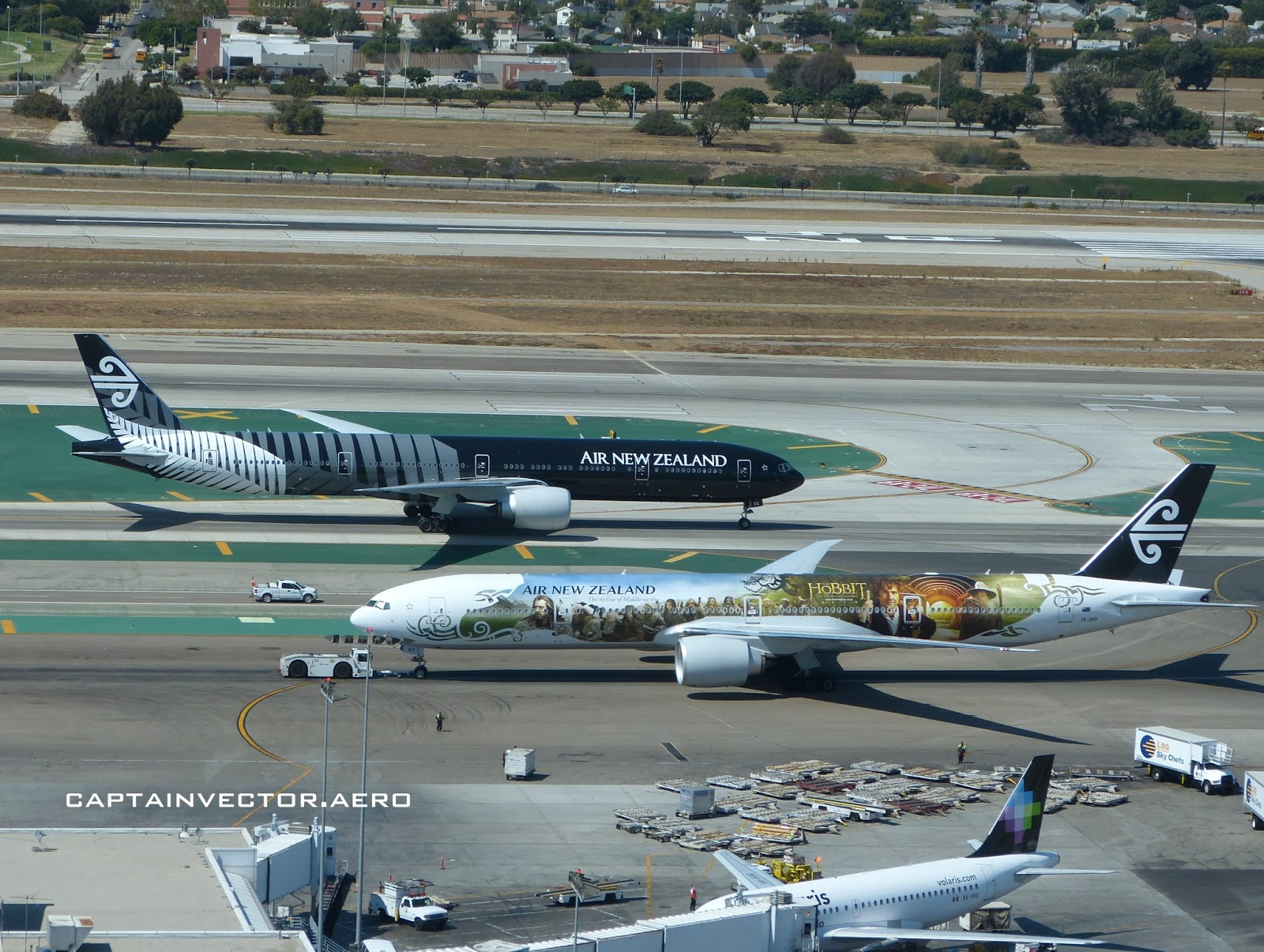 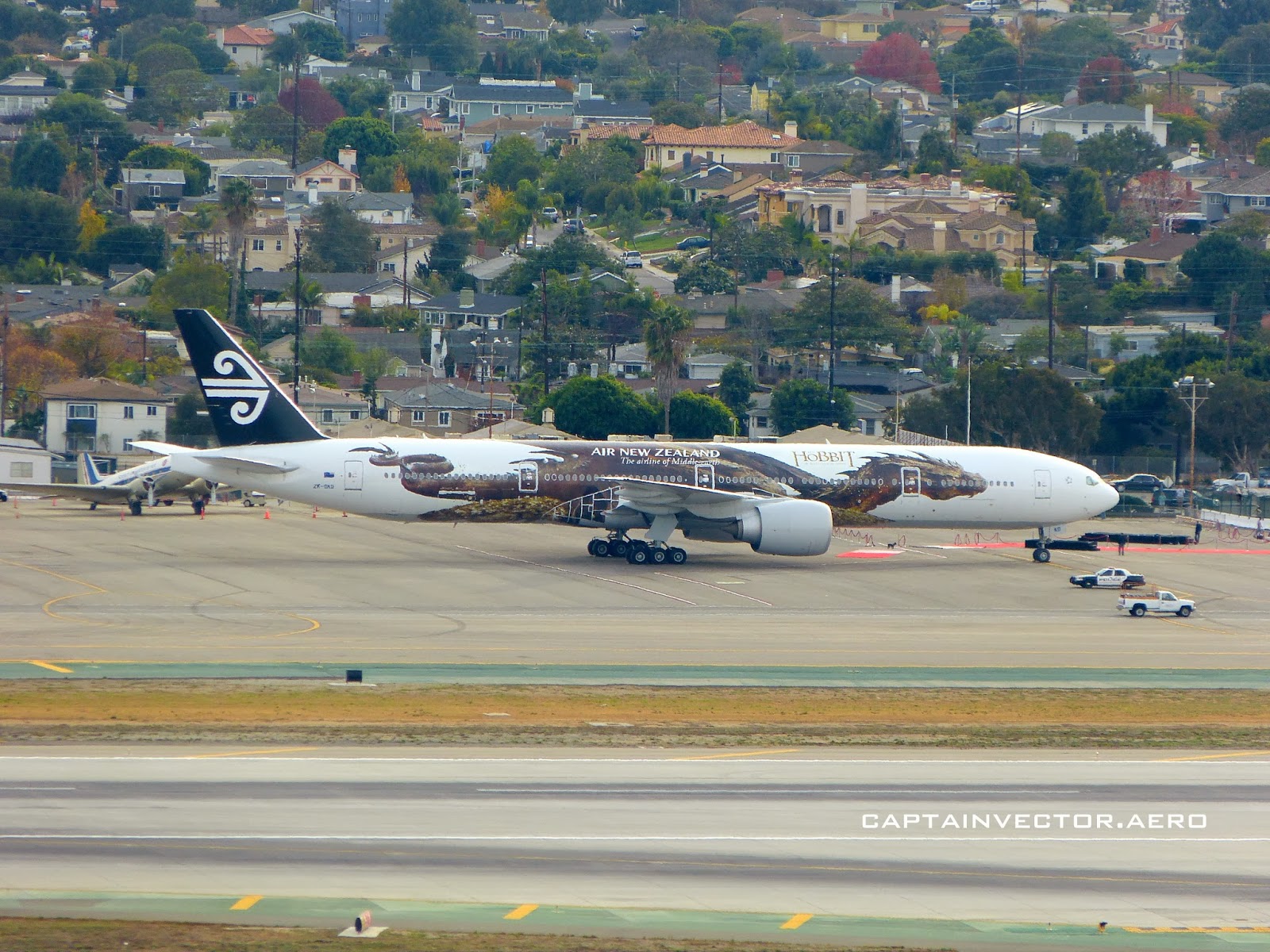 Posted by CaptainVector at 9:46 PM 2 comments: 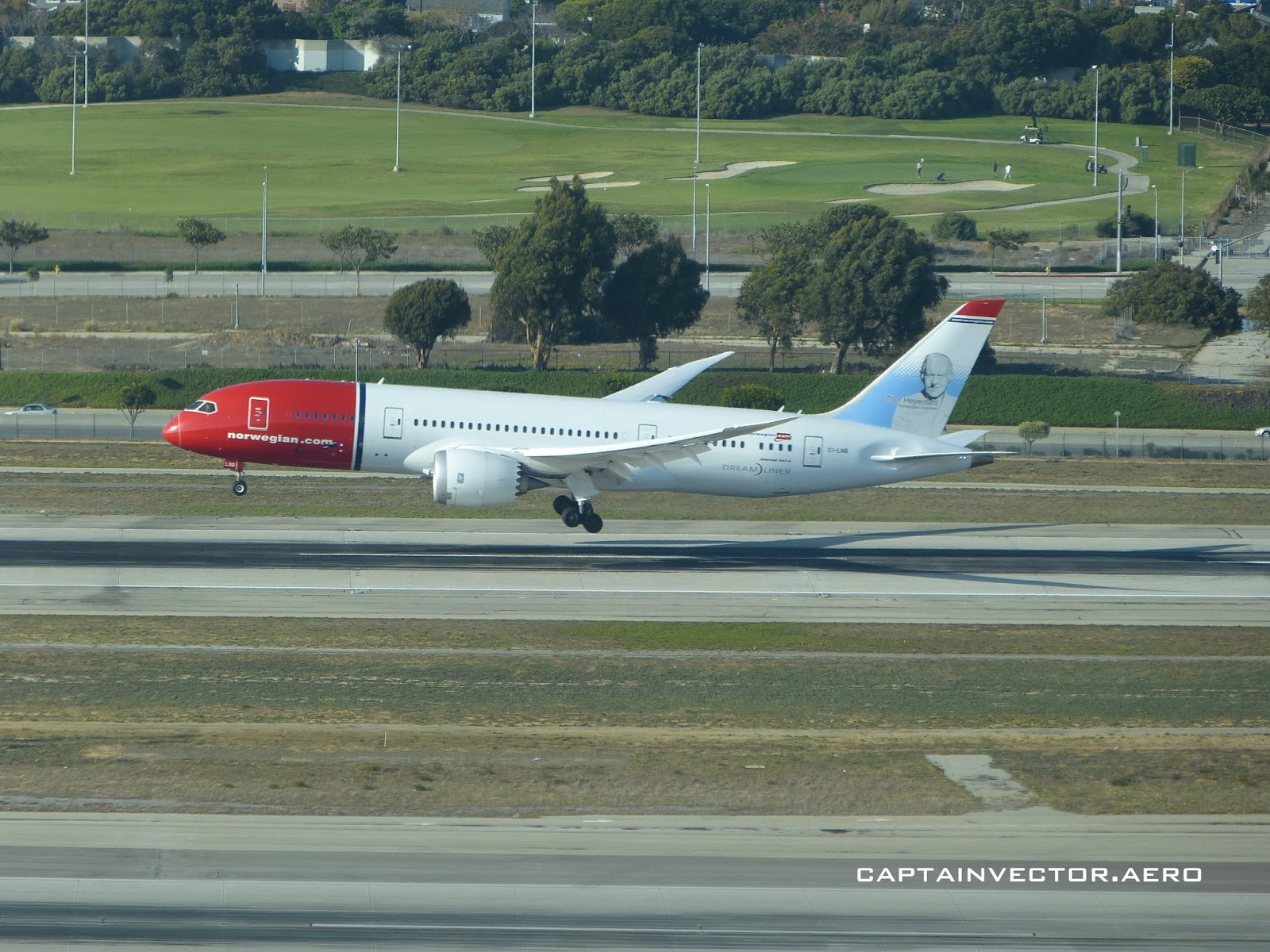 The first of three new carriers expected at LAX arrived this month: Norwegian Air Shuttle has begun offering service from Copenhagen, Oslo, and Stockholm. They'll be parking their new B787s at the TBIT. This is currently the only direct service to these cities from Los Angeles. Norwegian Air Shuttle (callsign: Nor Shuttle) is Scandinavia's second-largest carrier, Scandinavian (SAS) being the first. Each of Norwegian's aircraft features a historically significant Scandinavian on the tail.*

* - Update: Or so we were told, anyway. Here's another one of their Dreamliners: 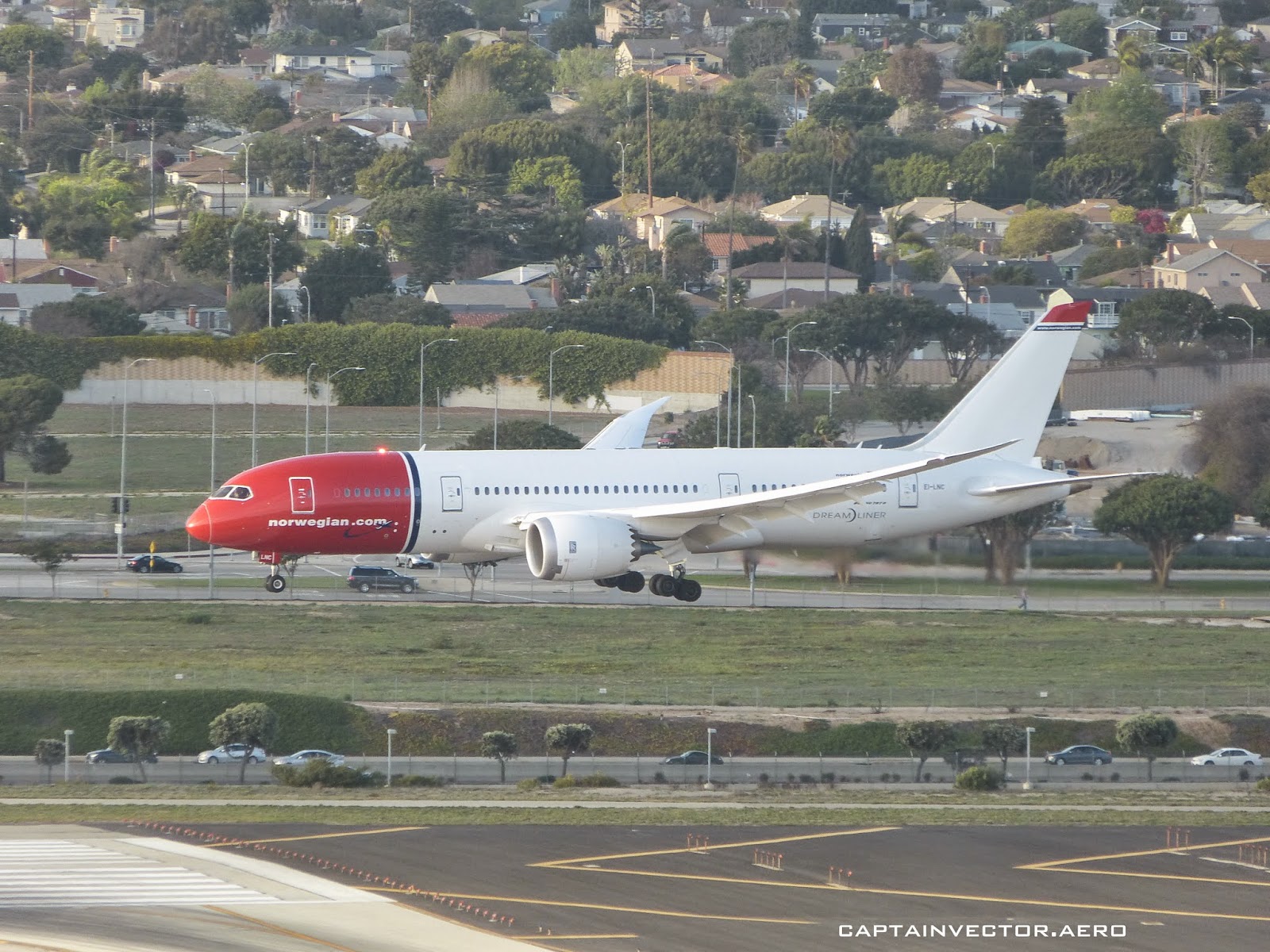 At the end of March, we're expecting to start seeing Saudia Airlines at the TBIT, followed by Etihad Airways in June.
Posted by CaptainVector at 11:47 AM 2 comments:

Shot of the day: SkyWest Flashback 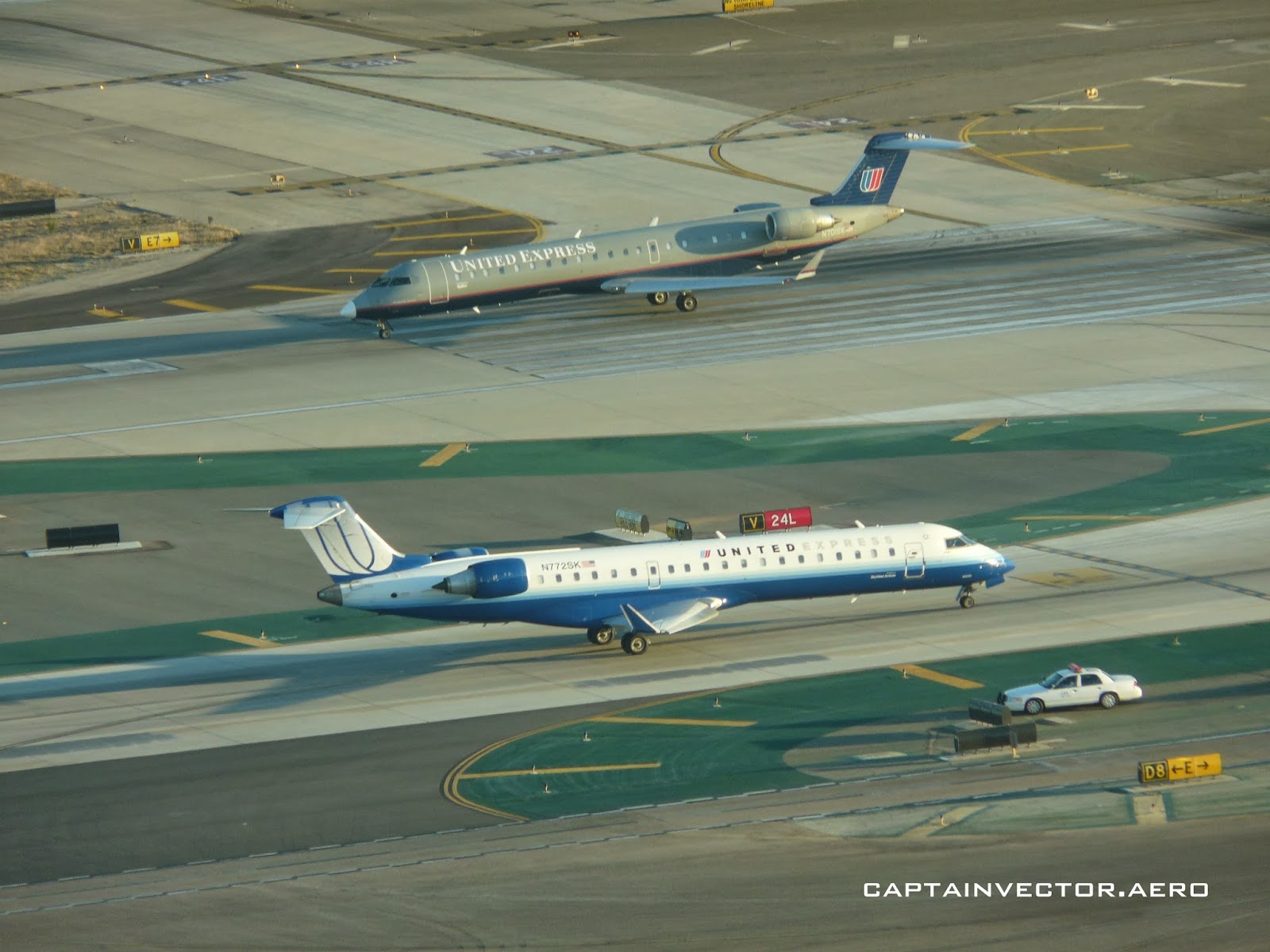 Many apologies for the lack of updates; yours truly has been more unwell than usual. So here's a flashback pic from a couple of years ago that features a pair of SkyWest CRJ7s, both wearing obsolete United Express colors. It's been a while since I've noticed a "gray top" RJ, but there are still a few E-120 Brasilias around wearing that livery.
Posted by CaptainVector at 7:45 PM 1 comment: