Five in one day

Okay, I know this is really what you all tuned in to see, so here it is: 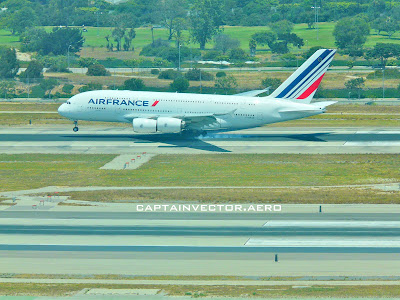 However, Air France was our fifth A380 of the day. It started shortly after sun up with Qantas: 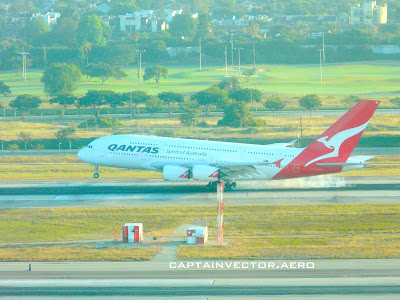 And then another one: 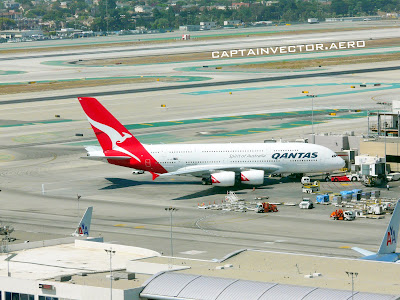 Next to arrive was Korean: 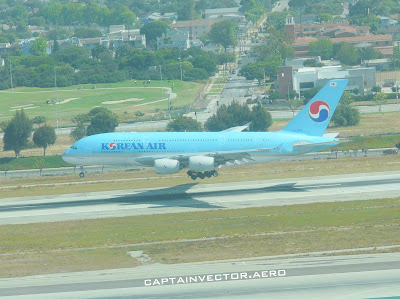 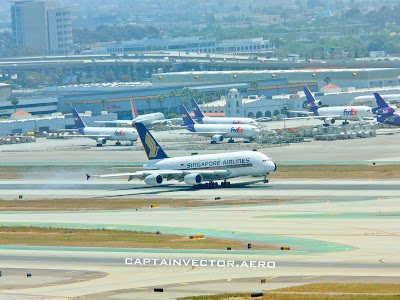 Thanks to UR for taking this one. As an aside, this is the first time I can recall seeing the Singapore A380 on the south side of the field, although it will certainly become much more common. As I may have mentioned before, we try very hard to "pro-park"* the A380s because of the hassle they create once they're on the ground. The simplest gate for A380 operations is 123, at the north end of the TBIT, as it creates the least disruption to the rest of the traffic. As such, most A380 arrivals occur on runway 24 Right, with subsequent departures from runway 24 Left. However, if there are two A380 flights at the same time, the second one goes to gate 101 at the south end of the TBIT, which dictates a runway 25 Left arrival. A third A380 either waits for one of the others to leave, or heads out to the remote gates at the west end of the airport. There are several out there that can handle the A380; so far I've only seen us do that once with Qantas, and they went to gate 216.

Things got interesting this afternoon, as both Singapore and AirFrance arrived about ten minutes apart, and before either of their respective gates were available: 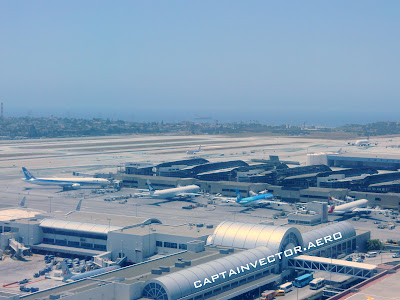 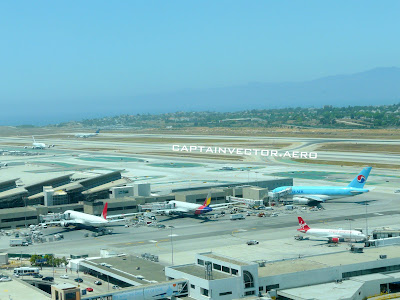 But finally, the moment everyone was waiting for, as our inaugural AirFrance A380 flight arrived at the Tom Bradley International Terminal: 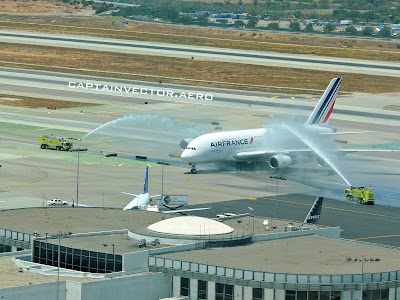 * - Pro-park is an internal term we use to coordinate with approach control to put arriving aircraft on the apPROpriate side of the airport for where they park. Freighters and aircraft parking at Terminals Four through Eight will (ideally) arrive on the south side, while aircraft for Terminals One, Two, and Three will land on the north side. Of course, that only works when approach control knows where they park and has the room to shuffle them back and forth; when things get busy they go to whatever runway is easiest for them to get to, regardless of their destination on the airport.
Posted by CaptainVector at 4:43 PM 4 comments: 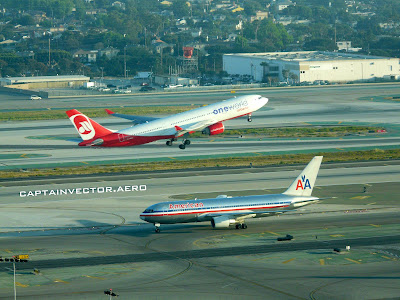 It's Memorial Day weekend in the USA, and that marks the beginning of the summer travel season. Flight schedules are getting beefed up, and part-time carriers are reappearing at LAX. Air Berlin is one of these, and they resumed operations at LAX earlier this month. Resumed and expanded actually, as in addition to three weekly flights to Dusseldorf, Air Berlin now offers direct service between LAX and Berlin's Tegel airport three days a week. Flight destinations alternate: Berlin on Mondays, Wednesdays, and Fridays; Dusseldorf on Tuesdays, Thursdays, and Saturdays. Flight times are about ten hours, with Berlin flights running about twenty minutes longer. At LAX, Air Berlin appears in Airbus 330-200s with a passenger capacity of 303, and usually parks at the Tom Bradley International Terminal. 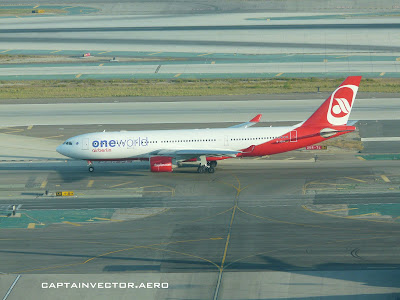 Posted by CaptainVector at 5:51 AM 2 comments:

Quiz: Another view of a new arrival 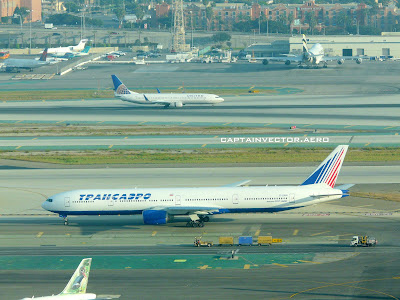 This one caught me by surprise; I didn't realize that there was something noteworthy here until I uploaded the photos from the camera. I first told you about Transaero last week, so what have we here? 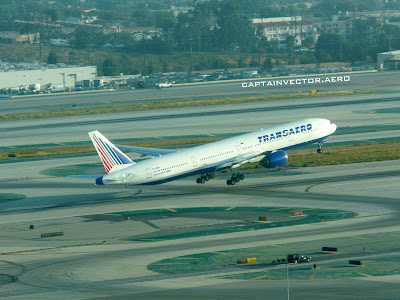 Posted by CaptainVector at 1:52 AM 8 comments:

And yet one more new arrival 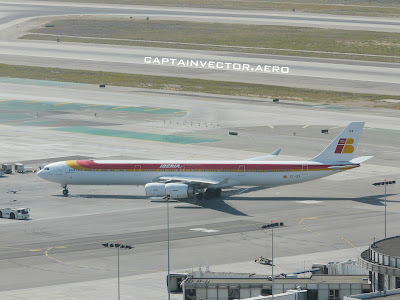 Yet another new arrival 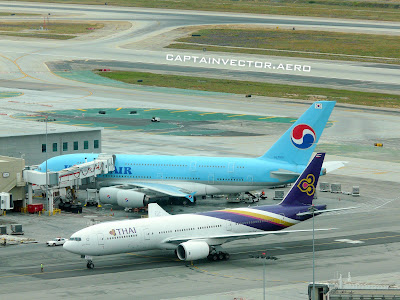 Thai has discontinued their late evening non-stop Airbus flight to Bangkok, but in it's place they now bring in a midday B777-200 from Seoul, South Korea. 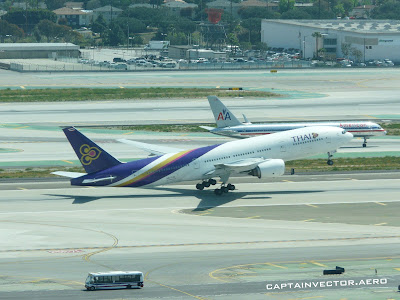 Posted by CaptainVector at 5:38 AM No comments: 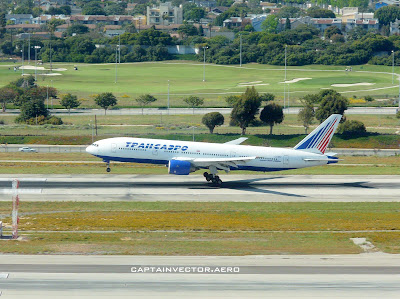 Our latest new airline at LAX is Transaero, from Russia (callsign: Trans Soviet). They operate twice a week from Moscow's Domodedovo International Airport, using B777-200s. Like Aeroflot, Transaero has different lettering on each side of the aircraft, and parks at the TBIT. 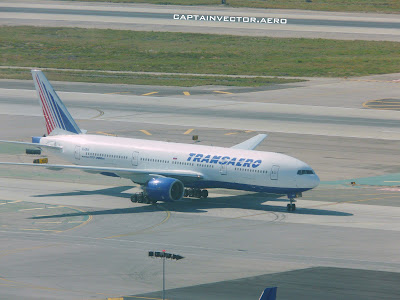 Posted by CaptainVector at 5:25 AM No comments: 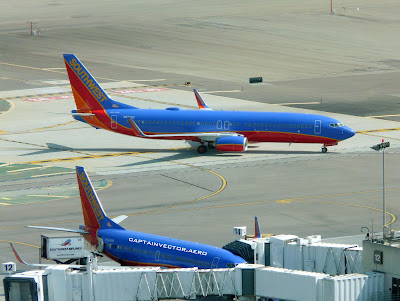 Email ThisBlogThis!Share to TwitterShare to FacebookShare to Pinterest
Labels: B738, Southwest, SWA 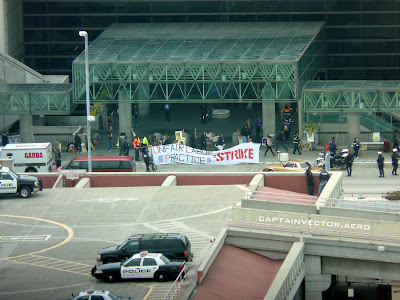 May first is International Worker's Day, also known as May Day. It's not a recognized holiday in the US, but that didn't keep the United Service Workers West from holding a picket and protest march at LAX. They started at the International Terminal, and proceeded eastwards along the north side terminals and then down Century Blvd. Vehicle traffic into the airport was severely hampered for most of midday, as two of the main routes into the terminal area were closed. 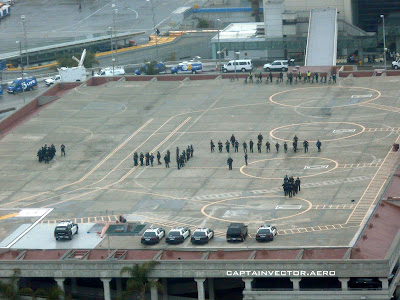 For whatever reason, we were not briefed on what was going to happen; our first indication that something was up was the police practicing crowd control maneuvers on the roof of one of the parking garages, which we normally use as a helipad (it's closed due to the cranes for the TBIT construction). You can see several TV trucks parked on the road just behind the garage. 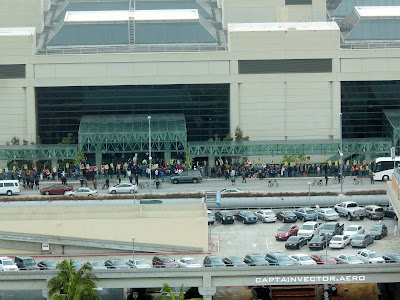 The picket line outside the International Terminal. As far as we could tell, everything went smoothly. 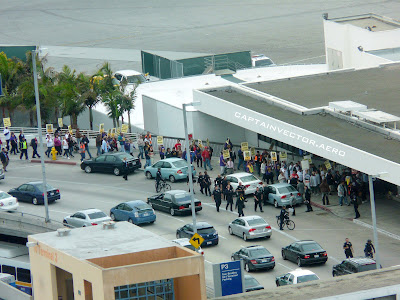 The marchers leaving the TBIT and approaching Terminal 3 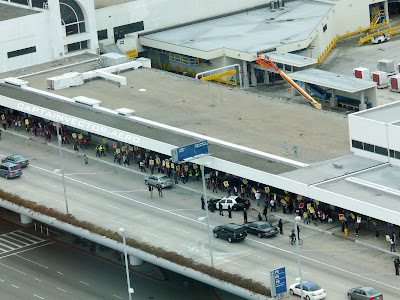 Leaving Terminal 3 and heading towards Terminal 2 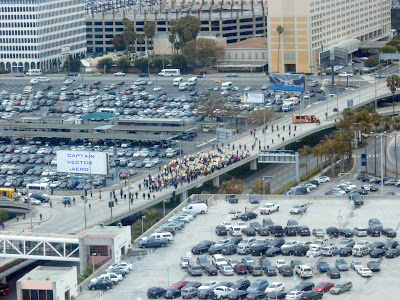 After passing Terminal 1, they continued east down Century Blvd. You can see a shuttle bus being turned around by the police; it had to go back the way it came and find another route.

L.A. Times: May Day protest at LAX ends 'as planned'

Posted by CaptainVector at 4:14 AM No comments: 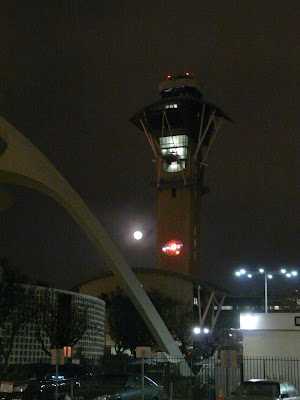 Early morning shot of the setting Supermoon
Posted by CaptainVector at 5:30 AM 1 comment:

As I mentioned, this one (or these three, if you prefer) was sneaky. What's wrong with these pictures? In a word . . . 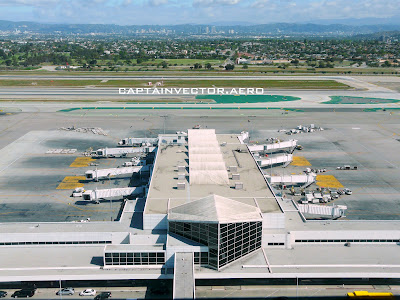 . . . nothing (told you it was sneaky!). These shots actually illustrate the latest changes in airline locations at LAX, which occurred last month:

AirTran has moved from Terminal Three to join Southwest (who now owns AirTran) and US Airways at Terminal One.

Alaska, along with its Horizon subsidiary, has departed Terminal Three and moved to Terminal Six, which it shares with Delta, Frontier, and United.

To make room for Alaska at Terminal Six, Allegiant has moved over to Terminal Five, which is otherwise Delta territory. 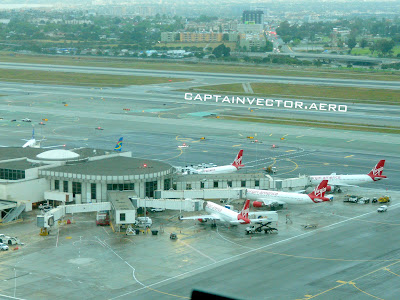 Meanwhile Spirit has also left Terminal Six and moved back over to Terminal Three, which is also home to JetBlue and Virgin America. Just to keep things interesting, Virgin Australia arrives into Terminal Five but departs out of Terminal Three.
Posted by CaptainVector at 10:04 PM 1 comment: