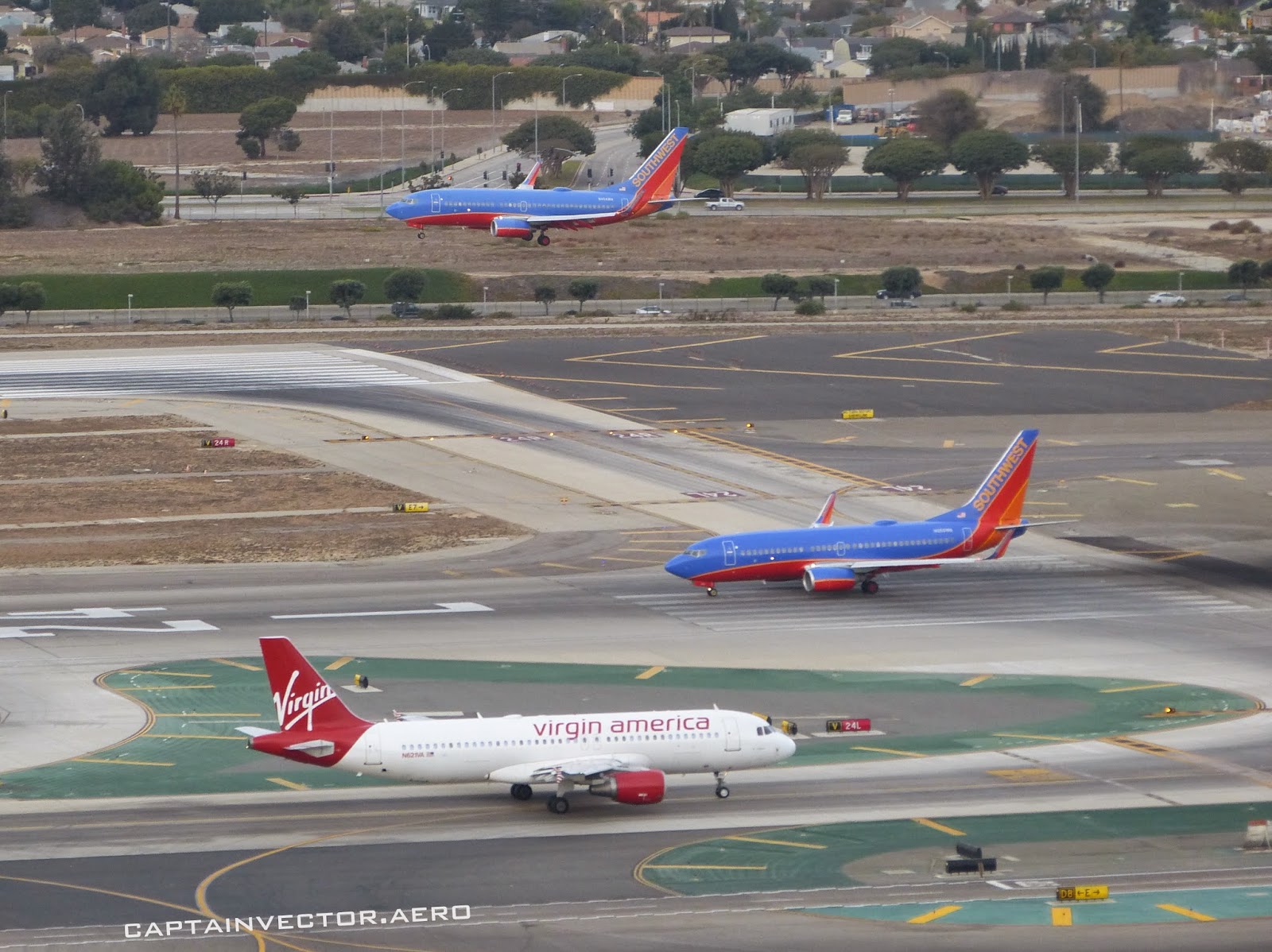 After some thirty-five years, the provisions of the Wright Amendment have expired, allowing expanded airline service at Dallas Love airport. Since 1979, airlines at Love have only been allowed to fly from Love to destinations in Texas and its neighboring states. Southwest was the main target of this legislation, as all the carriers at Love had been required to move to DFW when that airport opened in 1974. Southwest had not existed when the agreement to relocate all airline operations was signed, and claimed that as (at that time) it only operated within the state of Texas, the Civil Aeronautics Board had no jurisdiction. Thus Southwest's in-state operations were tolerated at Love airport, while all other air carriers flew out of DFW. Then the Airline Deregulation Act was passed in 1978, and Southwest announced plans to expand service outside of Texas beginning in 1979. The Wright Amendment (to the International Air Transportation Act of 1979) was designed to protect the huge investment of the cities of Dallas and Fort Worth, along with all the participating airlines, in DFW airport. The amendment was sponsored by Jim Wright, a congressional representative from Fort Worth. It restricted airline service from Dallas Love airport to Texas and its adjoining states (New Mexico, Oklahoma, Arkansas, and Louisiana). In 1997, the Shelby Amendment added Alabama, Mississippi, and Kansas to the list of states that could be served from Love field. Missouri was included as a result of the Bond Amendment in 2005.

Meanwhile, in 2004 Southwest announced its intention to pursue repeal of the Wright Amendment. Not surprisingly, American Airlines took the opposing side, and advocated against repealing the amendment. A compromise bill was passed in 2006 that put into place a gradual loosening of the flight restrictions at Love Field. The final date was October 13th of this year, making Love open to airline flights to any city in the nation. On that day, both Southwest and Virgin America initiated service between LAX and Dallas Love Field. Dallas is a new non-stop destination for Southwest from Los Angeles. While Virgin America had previously been offering flights into DFW, those flights are now flown into Love Field.

So LAX now has airline service to both major airports in the Dallas area: American and Spirit fly into DFW, while Southwest and Virgin America fly into Love.

For more about the Wright Amendment, I suggest this Wikipedia entry:  Wright_Amendment
Posted by CaptainVector at 12:27 AM No comments:

LAN Dreamliners: They're back! 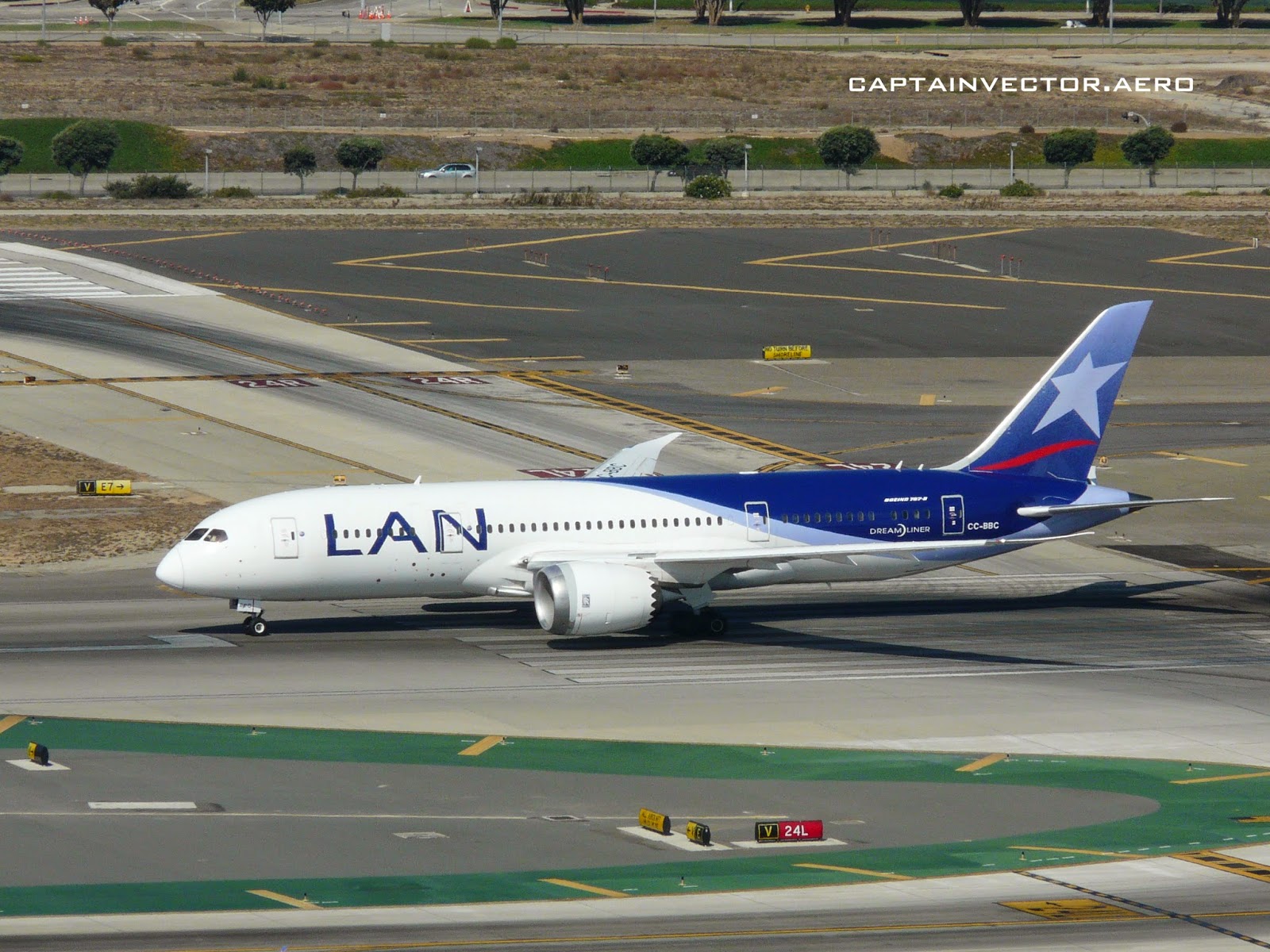 LAN was the first airline to bring the 787 into LAX on scheduled service, but the Dreamliners disappeared in the wake of the burning battery debacle. Once that was ironed out, United brought their B787s back -- and in fact we're now starting to see United's new stretched -9 Dreamliners. Earlier this year, United's Dreamliners were joined by 787s flown by Norwegian Air Shuttle. Conspicuously absent were the LAN Dreamliners, which had been replaced by B767s. But last week, we started to see LAN 787s again. I caught this one departing around lunch time. 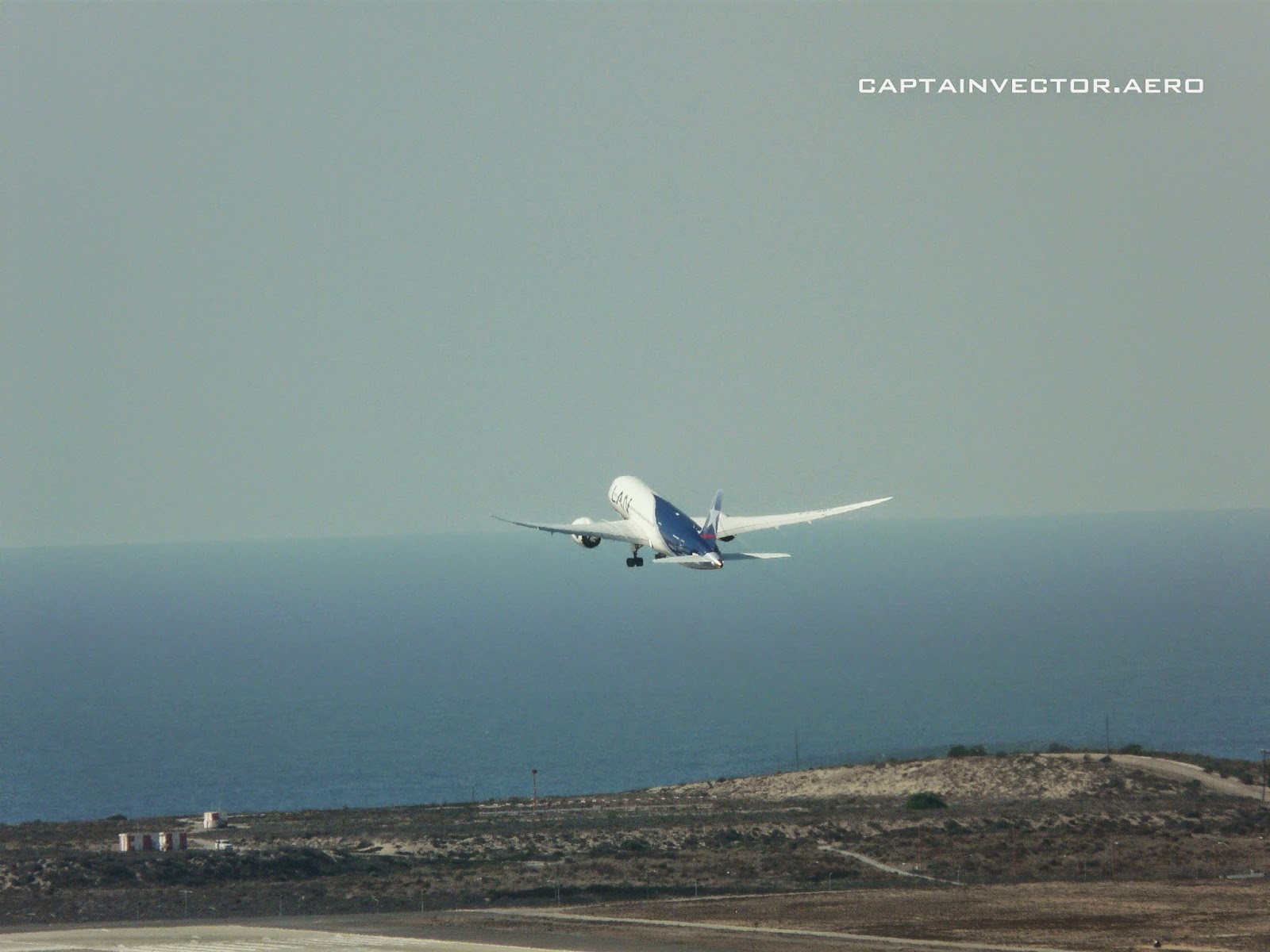 And now, for more sport 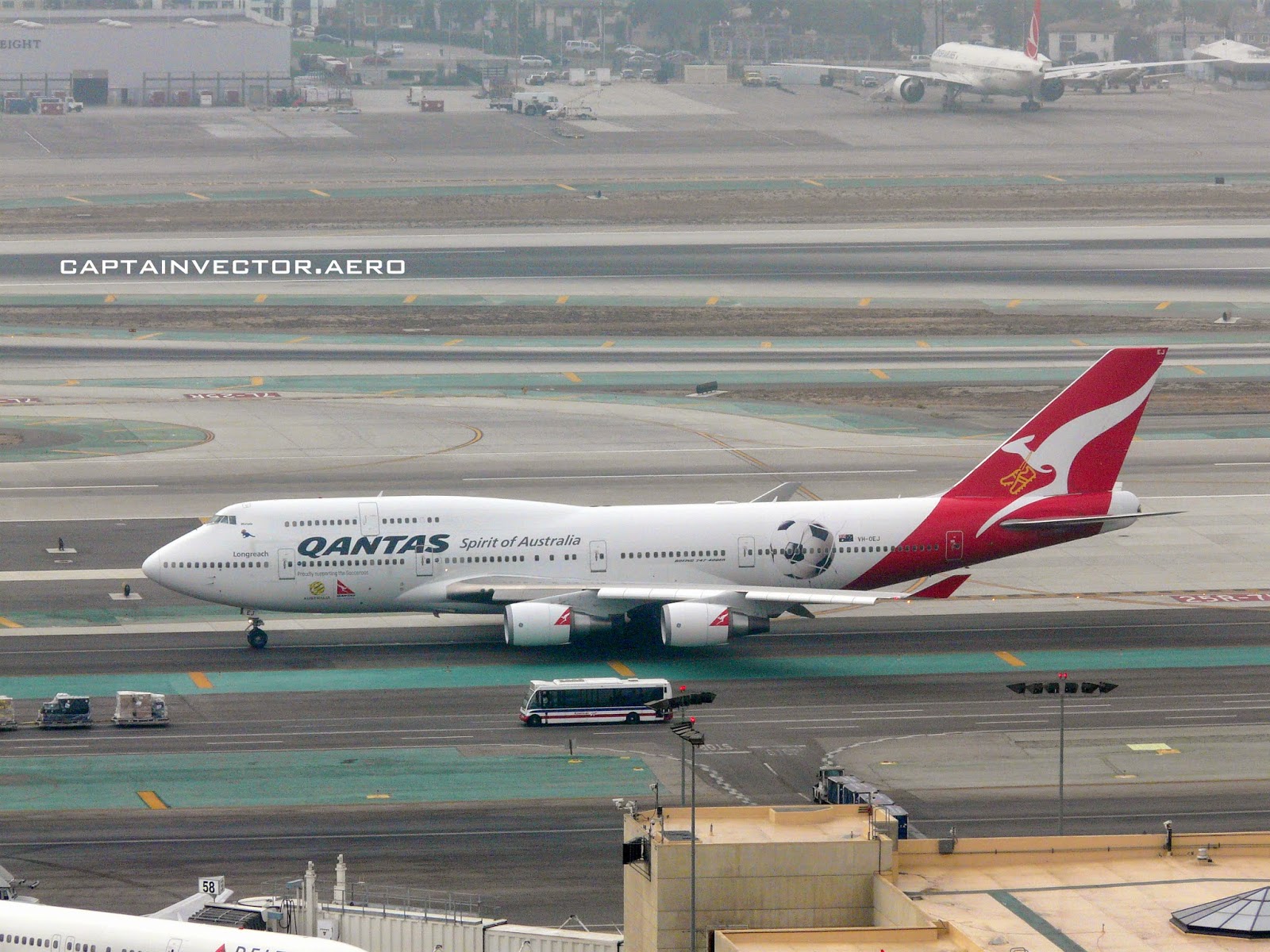 I've been wanting to catch the Qantas World Cup B747 for some time now, so even though it was really hazy last week, I grabbed this photo from the catwalk. I believe the Virgin America Airbus in the lower shot is the same one that sported a mustache last season: 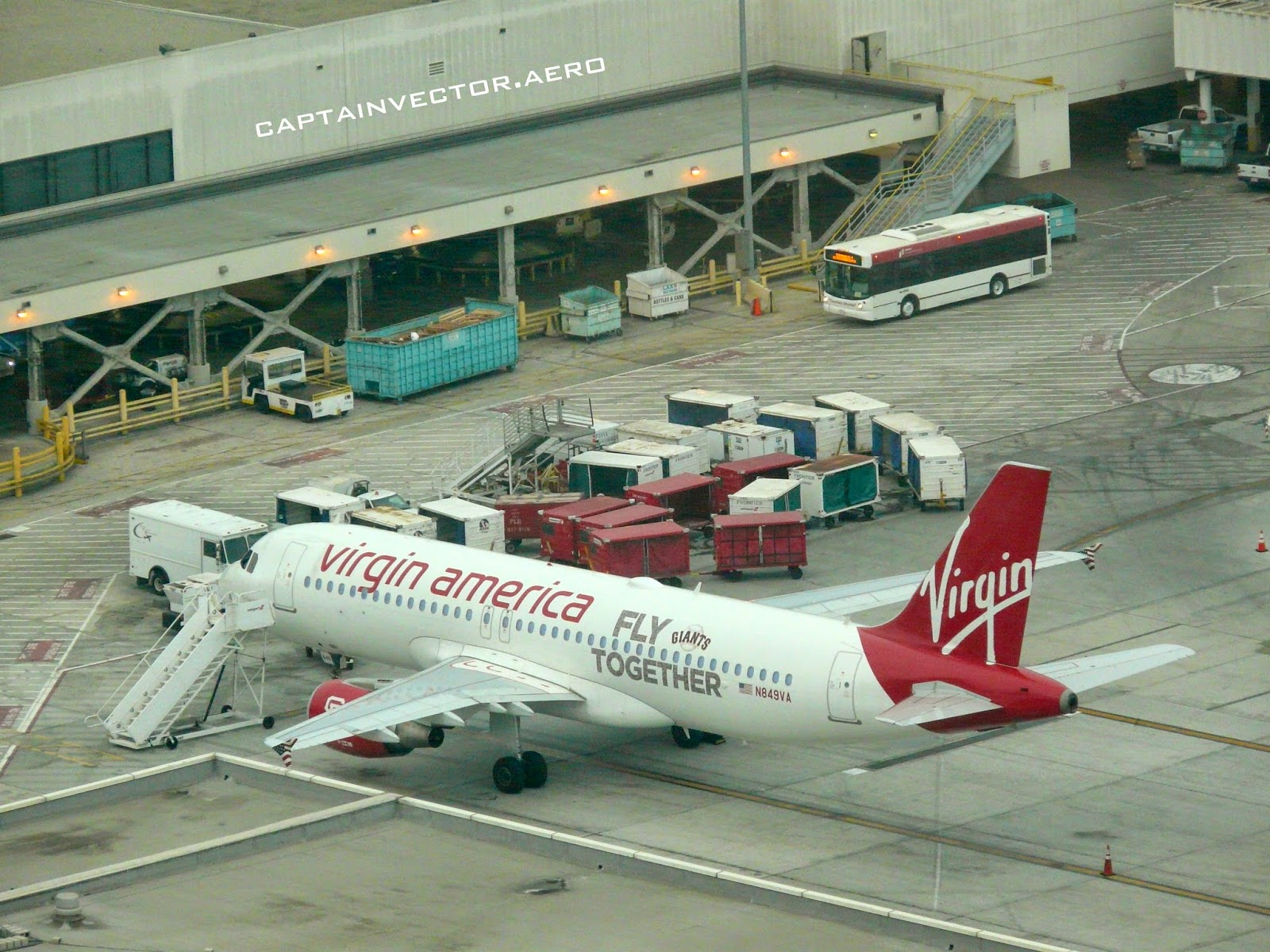 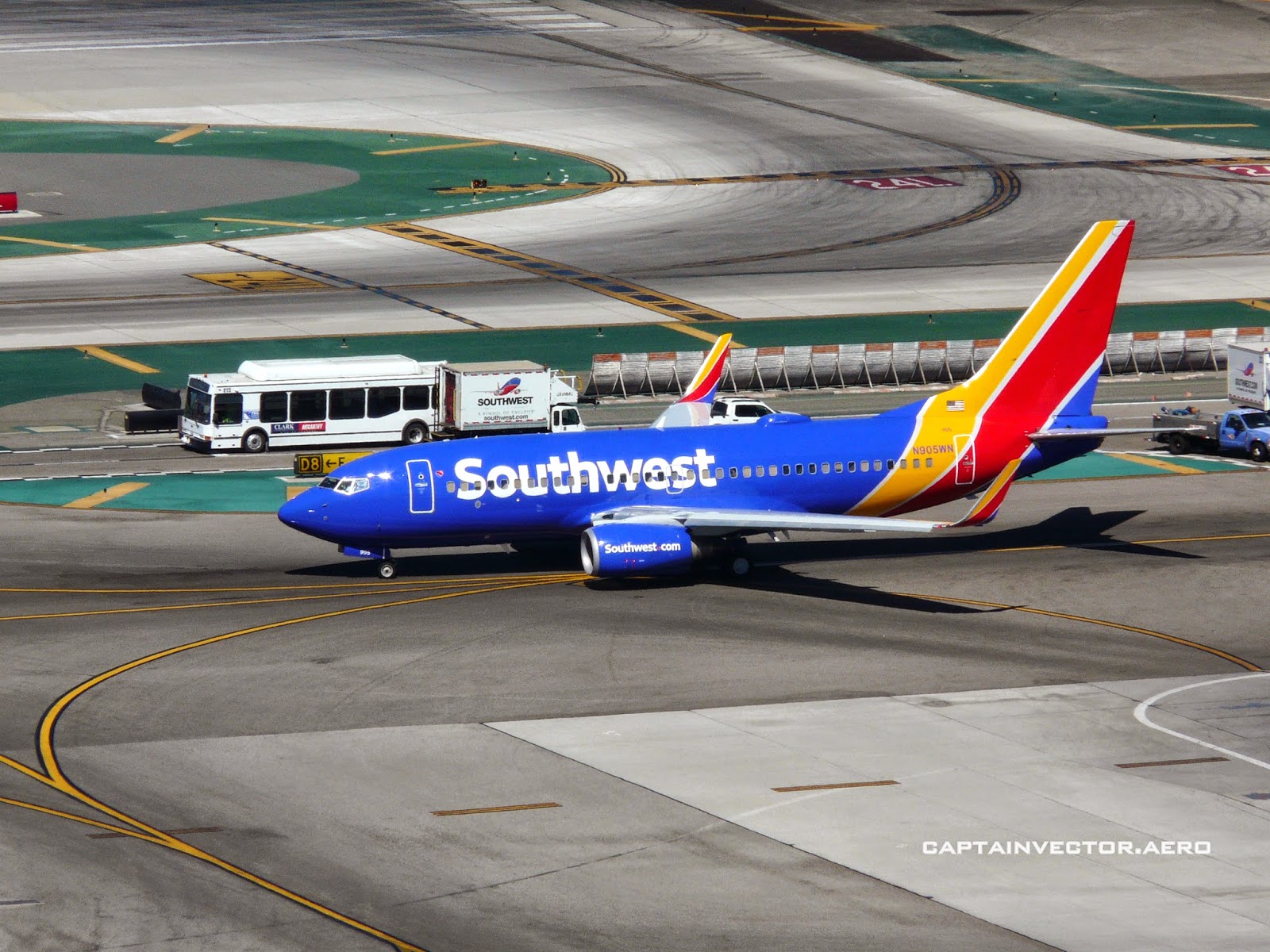 Last month, in fact the same week that Frontier and Spirit announced their new liveries, Southwest introduced its new paint scheme. I've seen it at LAX a couple of times now, but this was my first chance to catch it with the camera. Unlike the complete makeover at Spirit, the new Southwest paint has definite ties to the old: 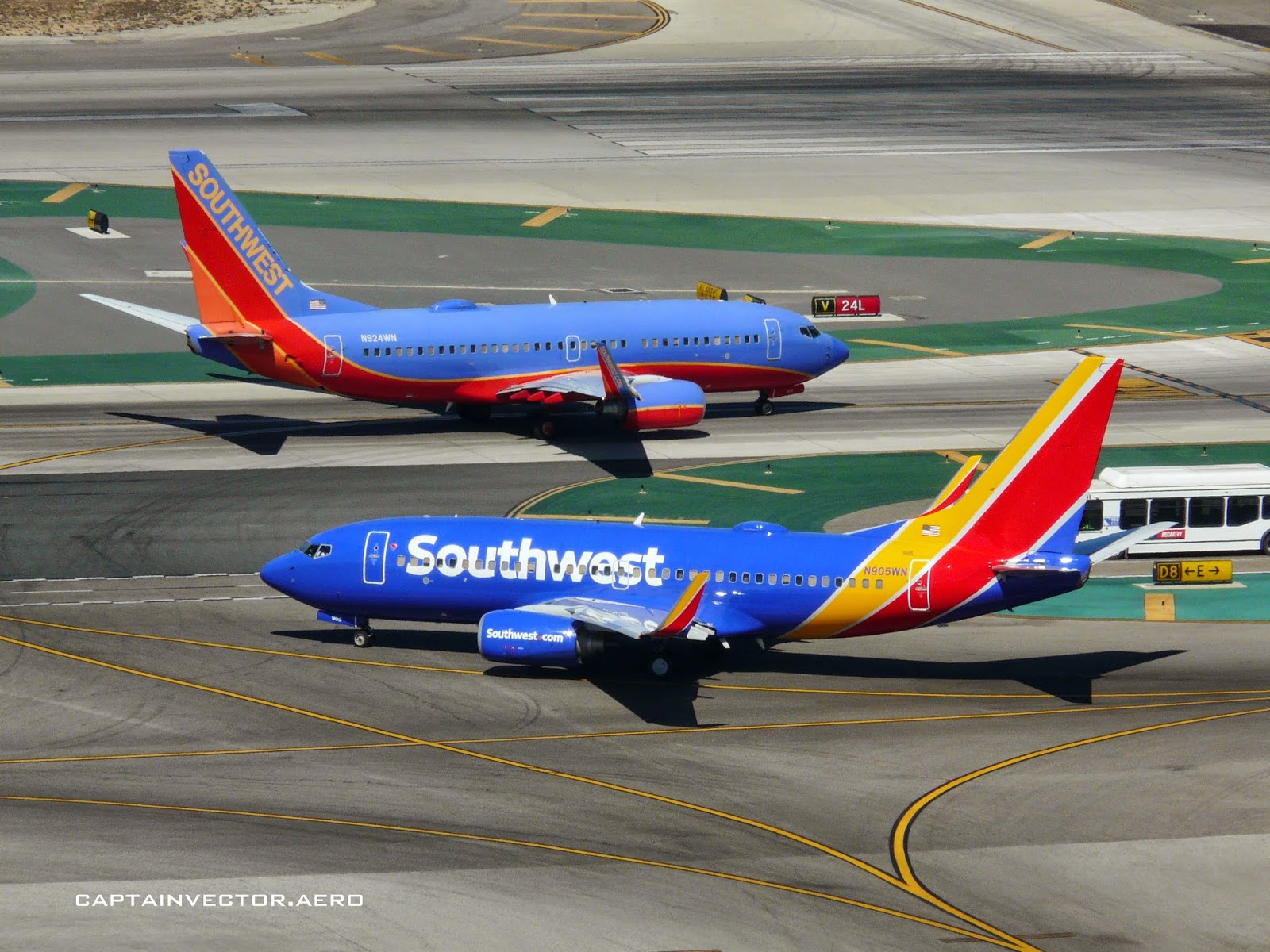 Posted by CaptainVector at 7:37 PM No comments:

Email ThisBlogThis!Share to TwitterShare to FacebookShare to Pinterest
Labels: B737, SWA

Something old, something new 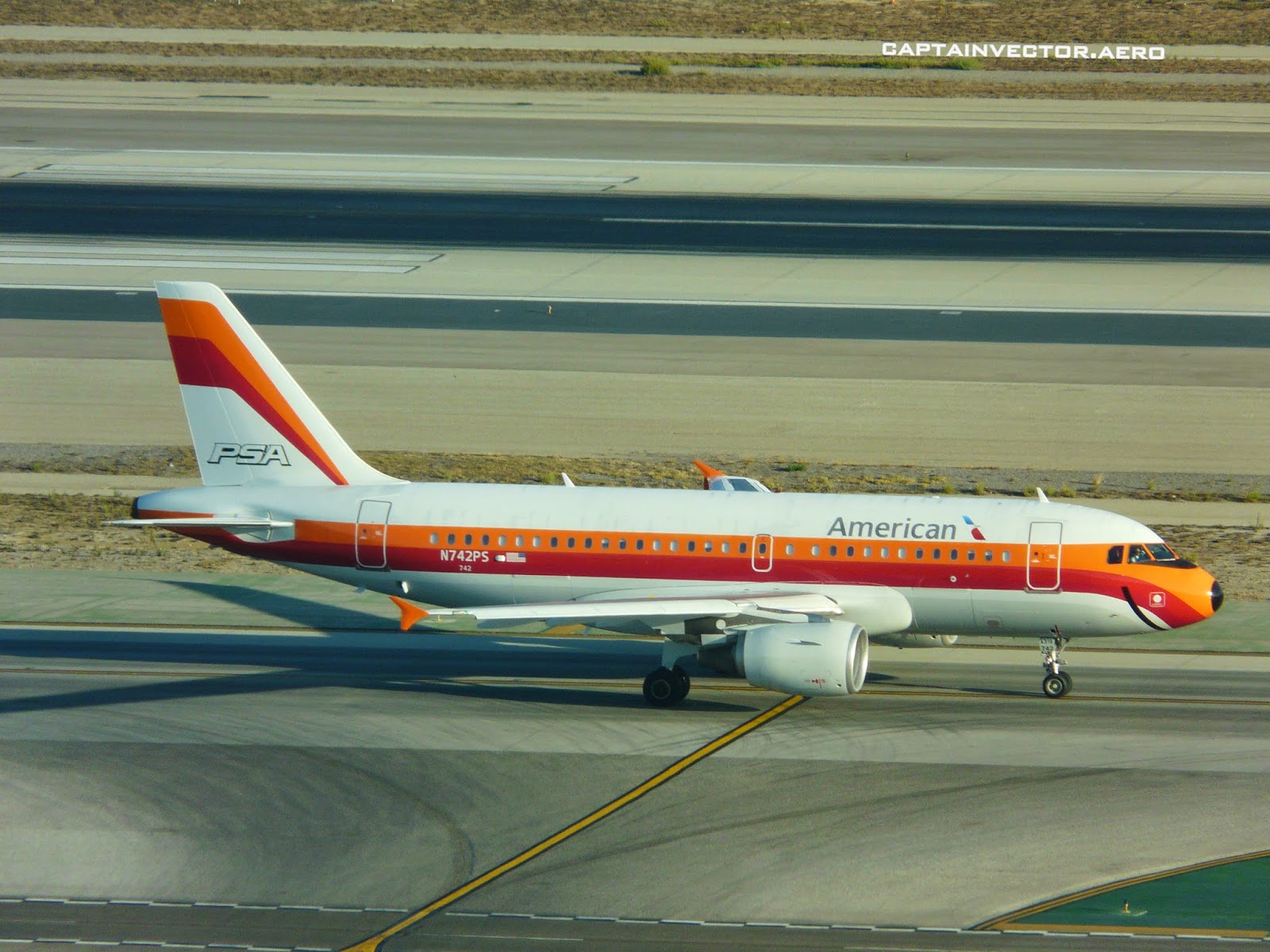 We've seen this US Airways Airbus with its retro PSA livery before, but now it wears the new American name and logo on the fuselage. Thanks to CG for the photo!
Posted by CaptainVector at 3:19 PM No comments:

Email ThisBlogThis!Share to TwitterShare to FacebookShare to Pinterest
Labels: A319, AAL, AWE, PSA

Another shot of the day 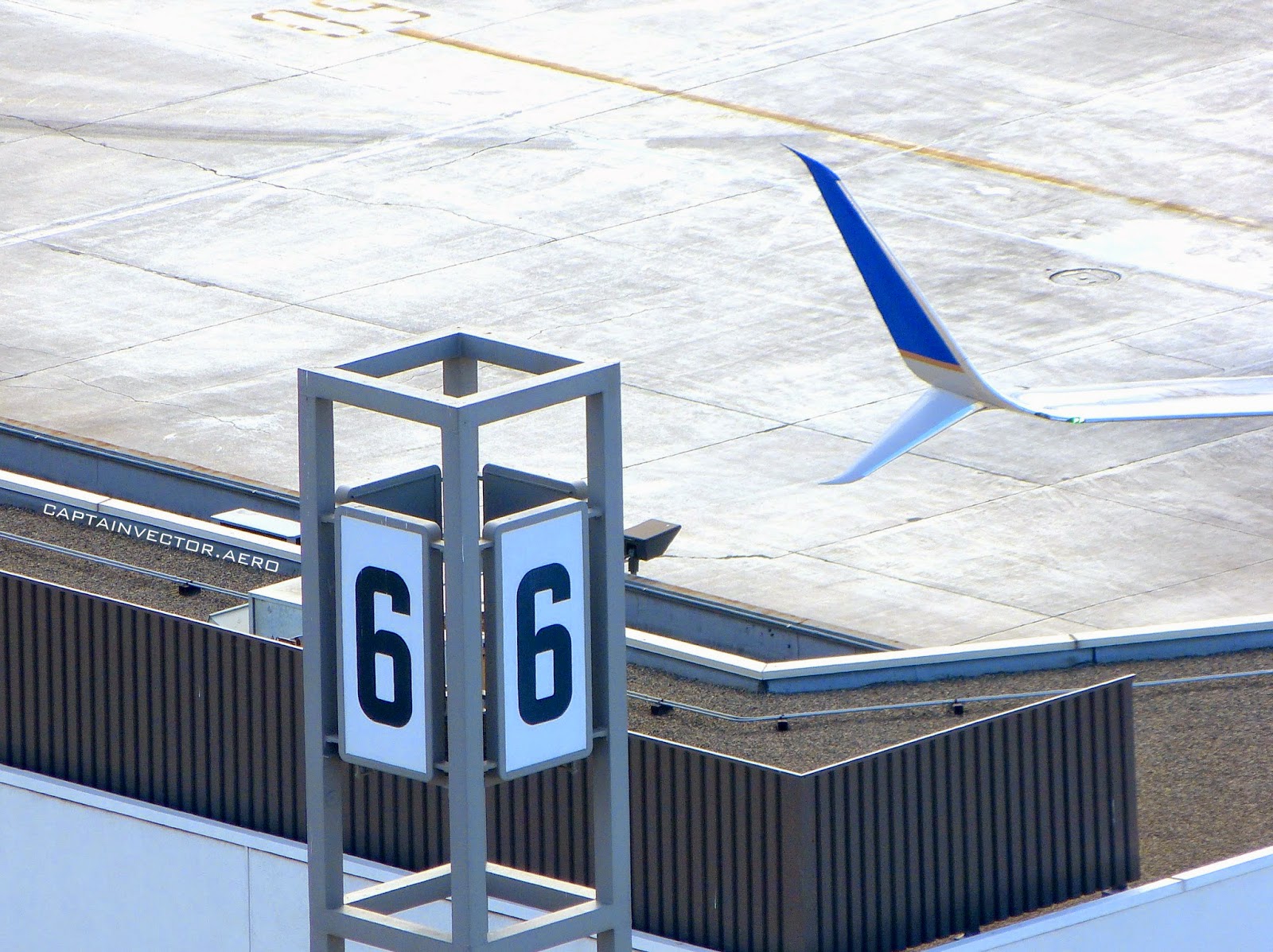 Posted by CaptainVector at 11:05 AM 2 comments: 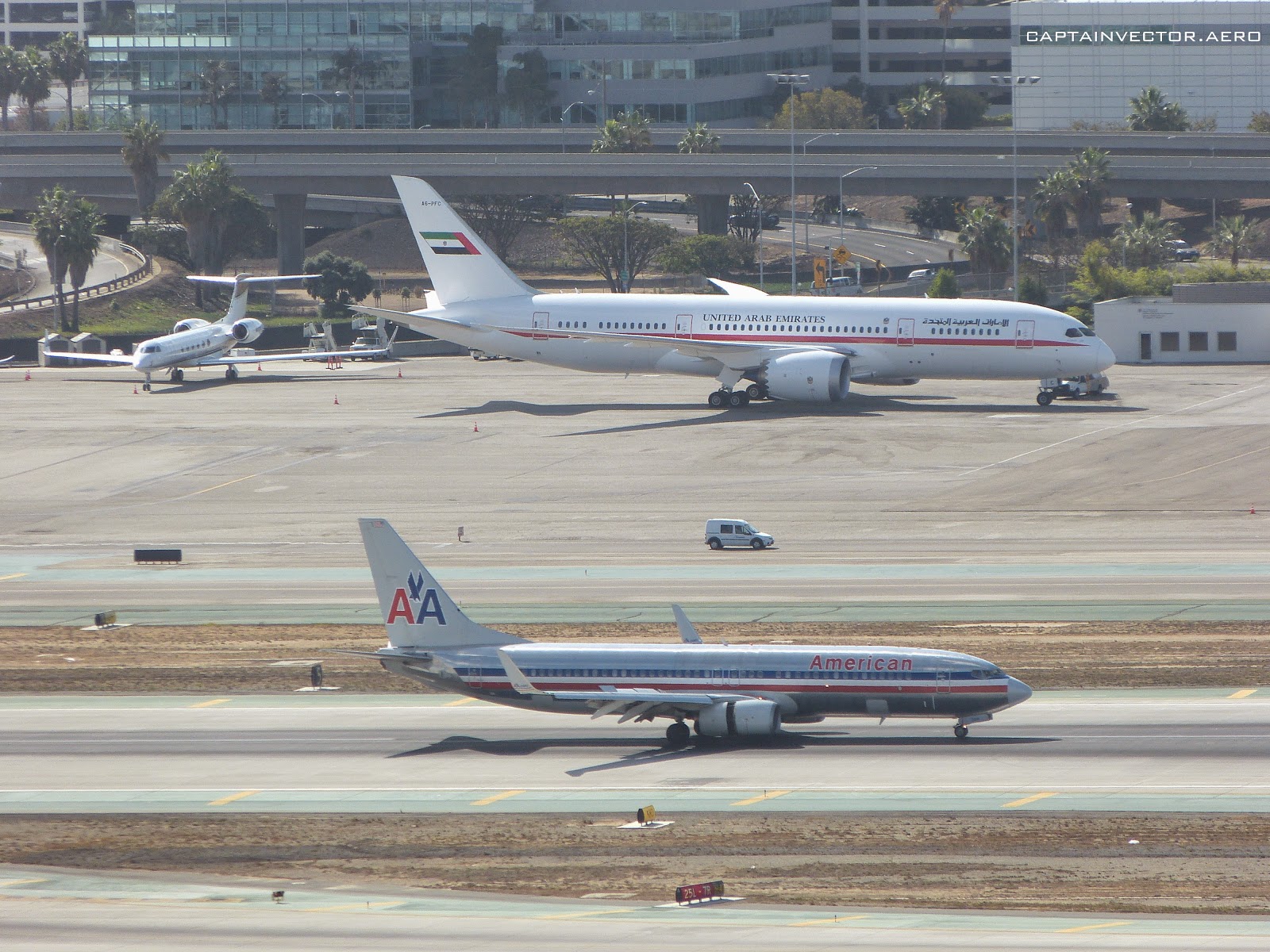 I gather from this that even the guys with the oil want more fuel-efficient aircraft!

Posted by CaptainVector at 11:05 AM 4 comments: