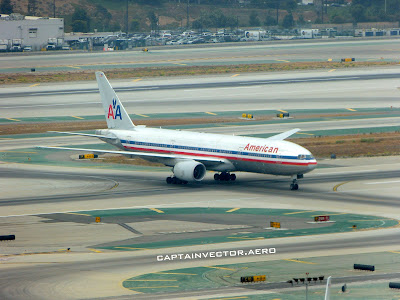 Just for some flavor, here's a snippet of a recent conversation between a couple of LAX controllers, inspired by the arrival of this particular airplane (LC = Local Controller; LA = Local Assist):

LC: Hmm, both [gates] 41 and 48B are occupied; I wonder where they're parking

LA: Yeah they can - but only if 45 is unoccupied
Posted by CaptainVector at 7:37 PM No comments:

Shots of the day 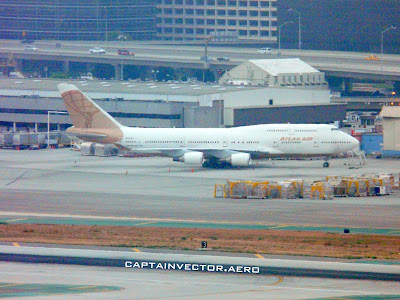 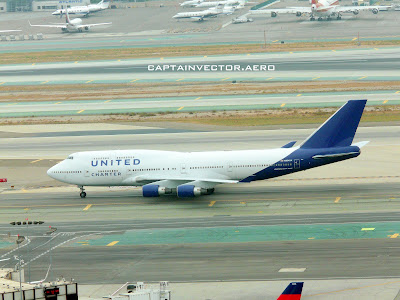 Posted by CaptainVector at 10:00 PM 7 comments:

It was a flock of RJs

I was working on the south side (runway 25 complex) this morning when I happened to notice this: 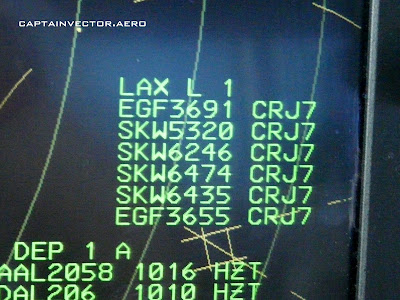 This is a list on our radar display of the last six arrivals on the south complex. It gives the aircraft callsign and type. What made it stand out is that they were all CRJ7s. Then I noticed this: 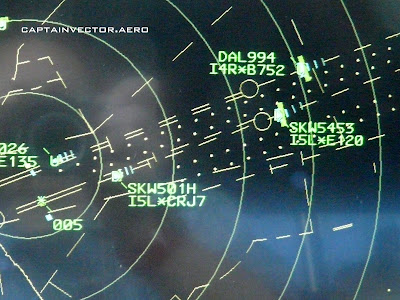 The next aircraft on final for 25 Left was another CRJ7. And then, at the same time, just to complete the series, we also had this: 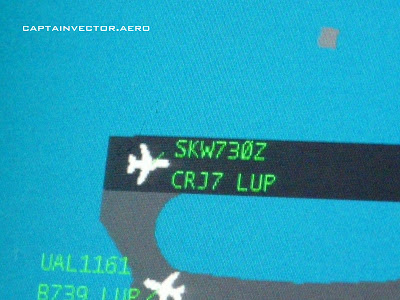 Yet another CRJ7 was departing off runway 25 Right. And lest ye think that all I do is look at the radar displays, here's what a CRJ7 looks like out the window: 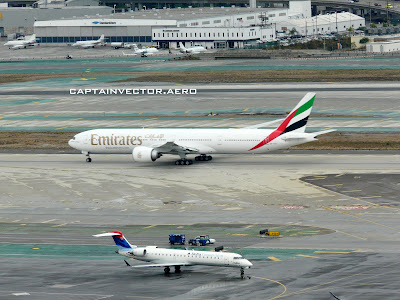 A Delta Connection (Skywest) CRJ7 taxis in as an Emirates B773 departs
Posted by CaptainVector at 9:34 PM No comments: 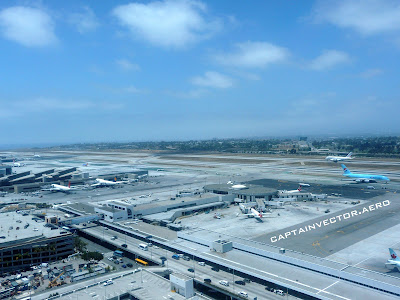 It's not easy to see, but there are four, count 'em four, A380s in this shot - and each in the colors of a different carrier. Quite possibly the first time that LAX has had this many all on one side of the airport.
Posted by CaptainVector at 9:29 PM No comments:

Lots of sharp eyes out there! Many of you noticed the ETOPS marked on the nose landing gear door. ETOPS is defined by the FAA as Extended Operations; formerly it was Extend Range Operations with two-engine airplanes; the International Civil Aviation Organization (ICAO) defines ETOPS as Extended-range Twin-engine Operational Performance Standards. (Alternate tongue-in-cheek definition: Engines Turn Or Passengers Swim!) What ETOPS represents in practical terms is the ability to use a twin-engine aircraft on routes where there are few suitable airports along the way in case of an emergency landing. The standard (non-ETOPS) is sixty minutes: There must always be an adequate diversion airport within one hour flying time at single-engine speed. ETOPS allows routes with longer flying times to a suitable alternate airport. The obvious application is long over-water (trans-oceanic) routes, but polar flights are also included. There are still a few land areas too where adequate airports are few and far between, such as the Amazon, the Himalayas, Australia, and parts of Asia.

In 1985, TWA was the first air carrier to receive an ETOPS rating, which allowed for 90-minute diversion range on its B767 flights between St. Louis and Frankfurt, Germany. After further experience, this was extended to 120 minutes. In 1988, the FAA extended ETOPS to allow flights 180 minutes from the nearest airport. This puts nearly the entire surface of the planet within range of an ETOPS-180 aircraft, and further extensions are being considered. While 120 or 180 minutes may not sound so serious, let me remind you that they represent two and three hours, respectively. That's a long time to be flying with one of your engines (and its associated accessories like generators) inoperative. However, the reliability of today's turbofan engines has allowed twin-engine airliners like the B777 to fly nonstop from Los Angeles to Australia.

As far as I know, Southwest has no immediate intentions of flying to and from Australia. They are, however, making plans to fly from the US mainland to Hawaii, which requires ETOPS-capable aircraft. Some of Southwest's new B737-800s do have ETOPS Type Approval, which means that the airframe/engine combination satisfies the basic ETOPS requirements. But buying the proper aircraft is only half the battle; the airline must also prove to regulators that it is capable of operating ETOPS flights. This usually involves crew and technician training and procedures, as well as a demonstrated operational history of operating long-haul flights. Interestingly, not all of Southwest's new B738s are ETOPS aircraft: 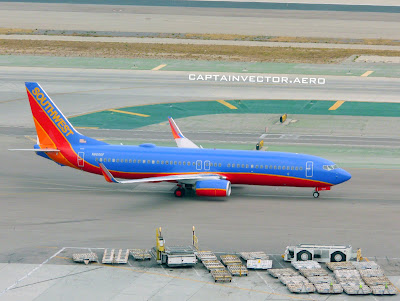 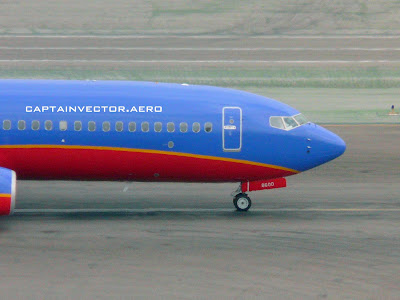 Why does this matter? It matters because in order for an individual aircraft to maintain its ETOPS status, it has to be maintained and serviced to ETOPS requirements. Thus, it can be very important for crews working on an airplane to be aware that it is an ETOPS aircraft. Examples of disqualifying events:

So when will Southwest take off for Hawaii? So far, nobody's been willing to tell me. I'm guessing it won't be until after the end of the summer, but you never know . . .

Posted by CaptainVector at 8:54 PM 3 comments:

Email ThisBlogThis!Share to TwitterShare to FacebookShare to Pinterest
Labels: B738, SWA

Apparently there are all sorts of interesting things in yesterday's photo; some of you have already sent in some great comments, including at least two who noticed the same thing I did. But for those who wanted a little hint, I cropped out some of the unnecessary details. So take a look at this one; How about now? 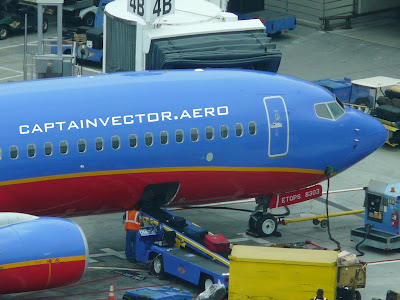 Photo puzzle of the day

Take a look at this shot I took a few days ago. It shows one of Southwest's new B737-800s parked at gate 4B. Notice anything interesting? 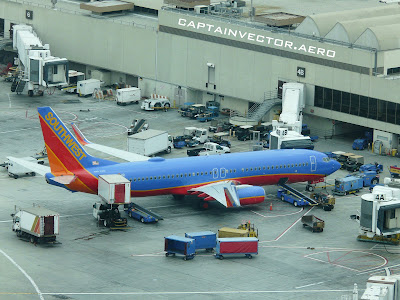 Now that we've made it through a week of AirFrance A380s, here are a few more views: 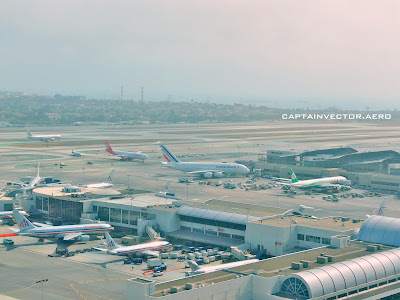 For the inaugural flight, the AirFrance A380 was parked at gate 123. Here they are at the south end of the TBIT, at gate 101. 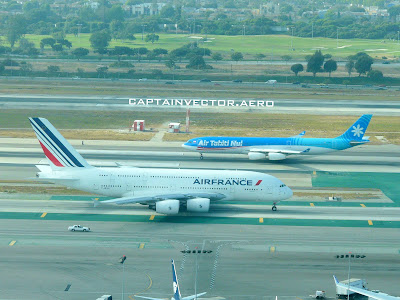 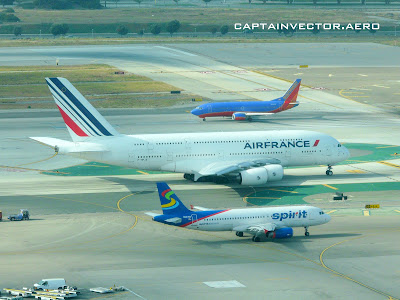 Possibly another one of those only-at-LAX shots: An AirFrance A380 sandwiched between a Southwest B737-300 and a Spirit A320 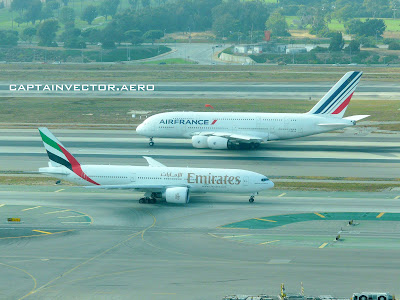 AirFrance rolling for takeoff on runway 24 left, as Emirates taxis out in a B777-200 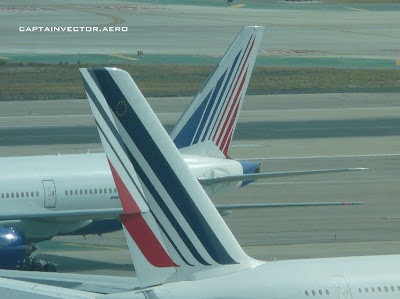 Bonus shot!
Posted by CaptainVector at 8:38 AM 5 comments: