I've just returned from my spring expedition to the family homestead in Texas, where we celebrated my mother's birthday and my sister's acceptance to vet school at A&M. The driving distance is about 1550 miles each way, which allows plenty of time for audio books and idle thoughts. Along the way, I saw something that really demonstrated the current state of our economy. About fifty miles east of downtown Los Angeles, there's a Union Pacific rail yard that has tracks paralleling the I-10 freeway. The track closest to the freeway had a solid line of parked locomotives - more locomotives than I think I've ever seen. See if you can count them all:

Actually, there's more than that, as this photo shows: 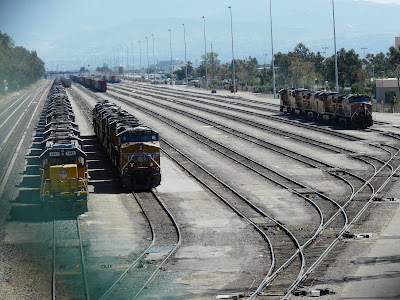 I mentioned this to a train buff friend, and he pointed out that railroads don't park these things lightly - their huge diesels do not tolerate starting up and shutting down like the engine in your car. There will be a good bit of maintenance required whenever they get around to firing these things up again. It's generally accepted that it's more economical for the railroad to just let them keep running, even for a month, than shut one down and start it up again. So, if they've actually parked all these locomotives, then railroad traffic is really down with no change expected any time soon. And by the way, there's an awful lot of empty track in that yard.

And that brings up another point: A huge amount of stuff enters the US of A through the ports of Long Beach and Los Angeles. Most of it is containerized, and goes forth across the country via truck and train. I took an informal survey of stuff I've recently bought, and nearly all of it came either from China or Taiwan. This stuff ranges from a Daisy Red Ryder BB gun to an Apple MacBook. It seems like everything comes from China these days; Cessna's newest little airplane will be built in China, and even Baldwin piano shut down their last US factory (in Arkansas) last December in favor of Chinese-built product. So what exactly is the stimulus package that we keep hearing about supposed to stimulate? Not our economy, methinks . . .

We've seen signs of the slow down at work, naturally. I just saw that our traffic at LAX is down 13-percent from last year. By passenger count, we're actually now the fifth busiest airport in the country; Denver has passed us up to take the number four spot behind Atlanta Hartsfield, Chicago O' Hare, and DFW. That said, there are some developments that I'll report on next time. In the meantime, if you're in California, have a great Cesar Chavez Day; for all the rest of you: Happy Tuesday!
Posted by CaptainVector at 7:42 PM 1 comment:

As promised, this time I'm back to airplanes. This missive is a bunch of photos I've taken within the last couple of weeks. Other than that, there's no particular theme or topic this time around. Enjoy! 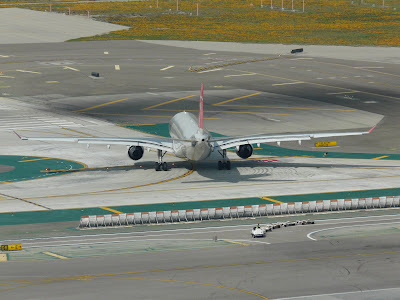 I'll start out with a teaser: Who and what is this?
Answer at the end of today's entry (If I remember)
Next, a collection of rarely seen freighters: 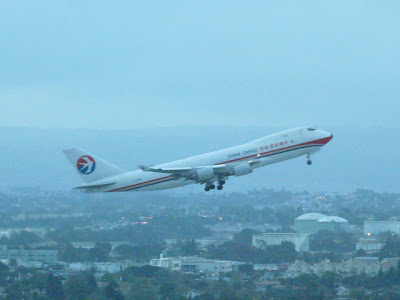 This China Cargo is unusual in that it's a 747; they usually bring MD-11's into LAX.
China Cargo, who uses the callsign "Cargo King", has a reputation here for having some of the worst accents and language difficulties. 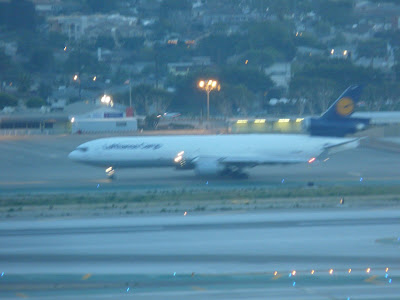 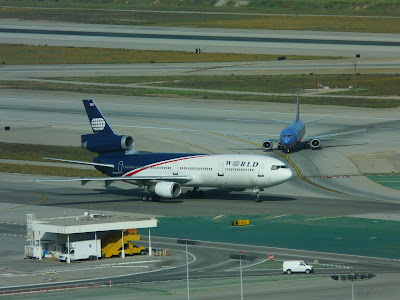 The plane that became the MD-11: the DC-10, seen here in World Airways' new livery, which sure beats their old solid-white scheme. Above with a Southwest B737-300, and below with a Qantas A380. 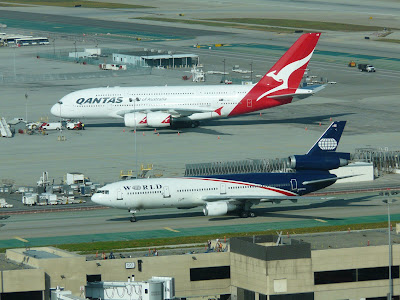 In an earlier entry I mentioned the Star Alliance, an airline marketing group with over twenty affiliated airlines. A competing marketing arrangement is Oneworld, which counts ten major airlines among its membership. Here are two: 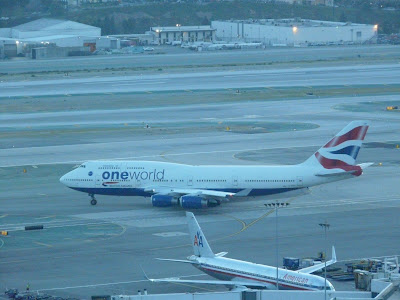 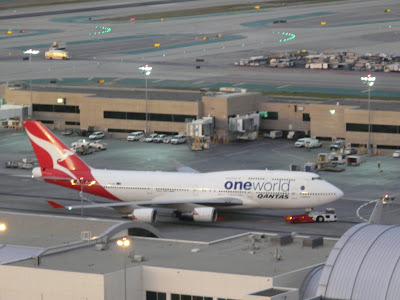 A Qantas B744 tows in the next morning.
How about a couple more heavy Boeings: 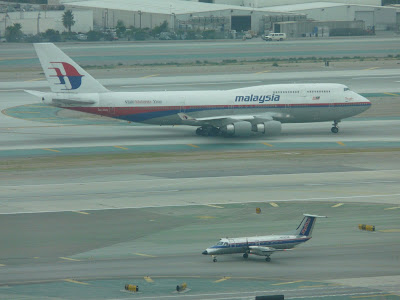 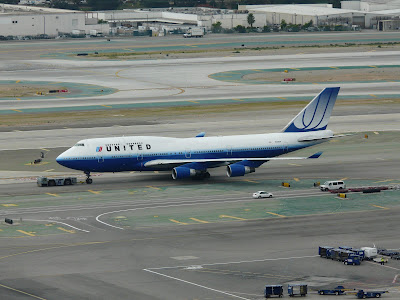 United has been flying some charters for Air Pacific while one of their planes is down for heavy maintenance. Here the plane is being towed from the International Terminal over to United's maintenance ramp. 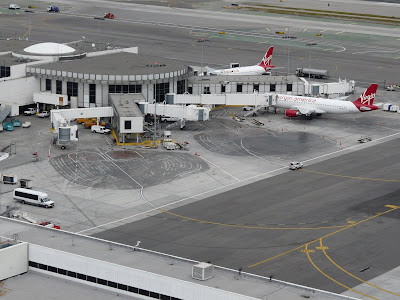 I thought the tracks left by the sweepers looked kinda neat. This is Terminal 3, shared by Alaska, V Australia, and Virgin America.

And now, the solution to the opening photo quiz: 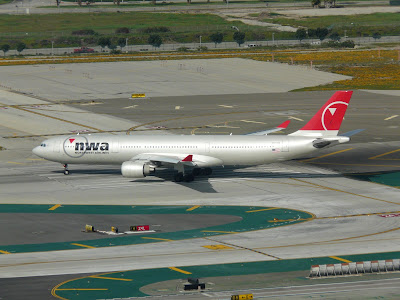 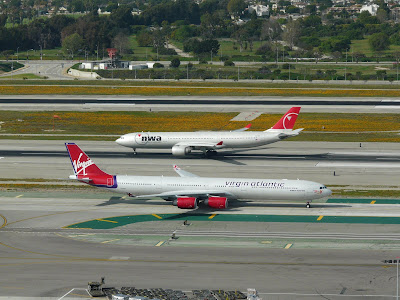 It's a Northwest A330-300, seen here leaving LAX for the paintshop in Victorville. It will return in a couple of weeks, sporting the new Delta livery. The crew doesn't have to wait that long though - they'll be back the same evening with the plane that went last time. It will then leave the next morning on a scheduled flight to Minneapolis - St. Paul. The Virgin Atlantic in the lower shot is an A340-600, still carrying the old Virgin scheme; the new scheme has more red on the tail and less blue.
Posted by CaptainVector at 5:19 PM 1 comment:

This is (hopefully) the final episode of Operation Fix-A-Cat. It's taken about three months to catch the targeted neighborhood strays and get them their shots and neuter/spay done. The final tally: Six neutered/spayed and released back into the neighborhood, seven unknowns sent to animal control, and two more that had to be quarantined after they bit me. The first of the biters I reported on back in January. While I've regained most of the use of my right thumb, it is still visibly swollen compared to my left, and there are still visible marks on my left hand as well. The last of the targeted cats was one of last year's crop of kittens, from the same litter (we believe) as Blackie and Fluffy, both of whom have featured in earlier reports. Unlike those two, this one, dubbed "Tiny" by my neighbor (who couldn't tell them apart), looked almost exactly like the mother - who was the first biter. Not only did she look like her mother, she acted like her too: She also bit me, and managed to draw blood through the leather gloves I was wearing. I didn't realize that she had actually gotten through the gloves until the blood soaked through them from the inside. Even so, the damage was much less than last time; maybe a half-dozen spots total. Here she is, still in the trap, having convinced me to leave her there: 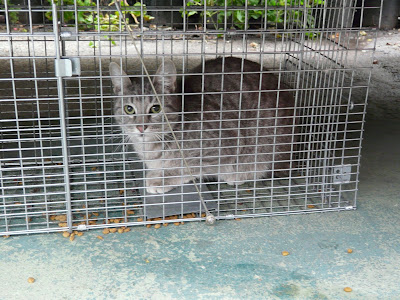 We definitely wanted to get this one as she had shown all the signs of being in heat about two weeks before we finally got her - naturally the day after the appointment I'd made for her at the clinic. The unexpected part was the five cats that I'd never seen before that showed up in the trap during the week we were trying to catch this one. Sadly, the six that we released back into the neighborhood have been targeted by the park management because of complaints about the number of loose cats. I've been in negotiations with the management to allow a select few (hopefully about six . . . ) to remain as rodent abatement troops. The undecided question is what to do about them when it comes time for me to leave. Since that doesn't appear imminent, I'm not too worried about it. For now, the traps and crates have been put away - I've had enough of messing with extra cats, and my resident four are feeling a bit neglected by all the attention devoted to the various strangers.

Next time, I'll get back to airplanes, I promise!
Posted by CaptainVector at 7:13 PM 1 comment:

All in a day's work

I was puttering about in the hangar yesterday with NPR's All Things Considered playing on the radio when I heard a story about a controller in Lake Charles, Louisiana, who talked a student pilot through landing her Cessna 172. For his efforts, he's been awarded NATCA's Archie League Medal of Safety. That student got lucky - not all air traffic controllers are pilots; here at LAX I'd estimate that about half of our controllers have some sort of piloting experience. Most other places I've been the pilot count among the controllers was somewhat less, perhaps somewhere between ten and thirty percent, but I don't think I've ever been the only pilot assigned to an air traffic facility. She was also lucky in her choice of airplanes: the Cessna 172 is just about the universal general aviation airplane, with an admirable safety record. In case you've never seen one, here's one I caught on the run-up pad this afternoon: 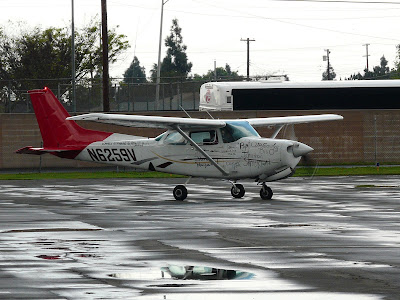 The most incredible part of the story to me was that she later flew away again. Since there was no further mention, apparently that landing went okay. I guess you really do have to get right back on the horse.

Here's a link to the NPR story: Flight Controller Honored for Grace Under Pressure
Posted by CaptainVector at 8:06 PM 2 comments:

Last month, I showed you pictures of the Delta/Northwest B747, B757, and Airbus 330. Since then, a few of the A320-series Northwest Airbuses have shown up wearing the new Delta scheme. Northwest has A319's and A320's, the two middle models of the range, which runs from the A318 to the A321. The larger the number, the longer the fuselage. While I should use this as the starting point for the next part of the LAX Aircraft Spotter's Guide, the iBook's battery isn't up to the task right now, so you'll have to stay tuned! 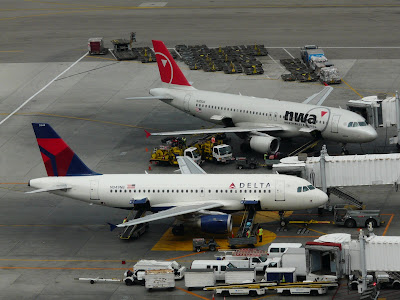 In this picture there's one of each: the Delta is an A319, while the silver Northwest is an A320.
An easy way to tell the two apart (aside from length) is the overwing exits: the A319 has one, while the A320 has two. 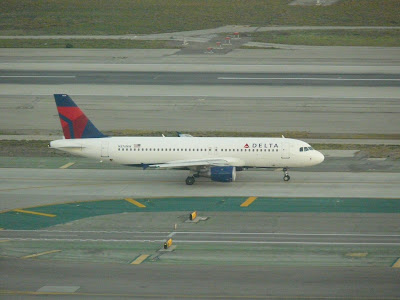 This fuzzy shot through the tower windowshade was the first A320 I've seen in the Delta livery. I must concede that I'm not yet used to seeing Delta colors on Airbuses. 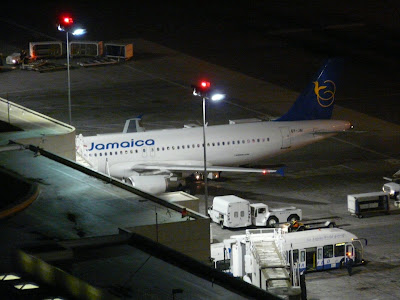 Here's a little Airbus lagniappe: Air Jamaica's one daily flight arrives and then departs again after dark, and so photo opportunities are few. I caught this A320 at Terminal Five last week.
Posted by CaptainVector at 12:23 PM 1 comment: