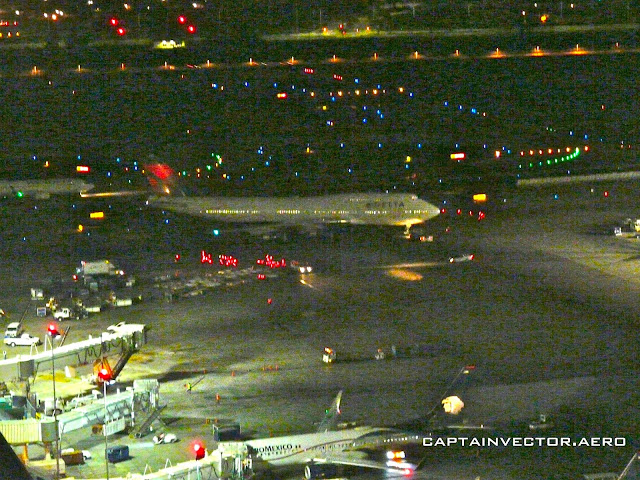 This week's edition of Photo Friday features several shots taken by my coworkers, who have many times helped out by grabbing photos when I'm not able. The opening shot is one, thanks to CG. The final Delta Airlines domestic B747 flight pushing out for departure, accompanied by a band of baton-waving ramp crew. Delta and United, the two remaining US mainline carriers who operate the B747, both have announced plans to retire the type from their fleets this year. Speaking of retiring, CG will soon be leaving our ranks as well, and we'll miss him. 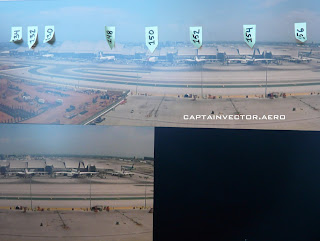 A comment was posted recently, asking if we have camera coverage of any of the hidden TBIT gates. We do, sometimes. When it works, this is about the best display that we get of the west side of the TBIT. The black square is supposed to be another view from a camera that we can control, but clearly we couldn't on the day this shot was taken. As you can see, the gates have been labelled for easier identification. I think SM gets credit for that. All of them are currently occupied with the exception of 134, at the far left. The gate next to it, 132, is currently closed for underground construction. 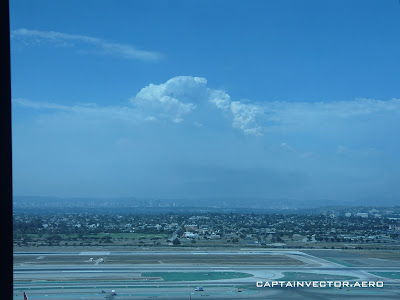 While Texas was recently in the news for hurricane Harvey, LA was in the news for the La Tuna fire. We could see the fire from the tower at night, but none of those shots came out clear enough to use. This is the towering cumulus cloud produced over the fire one day. One of our controllers had family threatened by this fire - he showed me phone pics of the fire taken from their back yard. They had to evacuate, but fortunately the fire didn't actually make it to their house. As it so happens, he is also one of the ones who particularly likes to play with the camera. Most of his shots I'm not allowed to publish, but here's one that came out really nice: 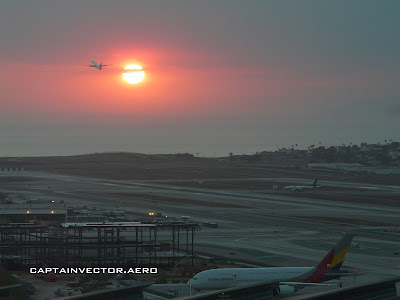 I don't recall why I took this next photo, but it was about 7 in the morning: 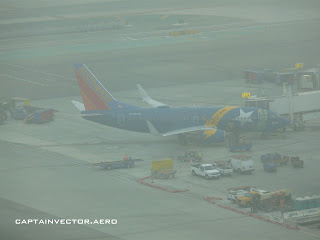 This one was taken just 5 minutes later: 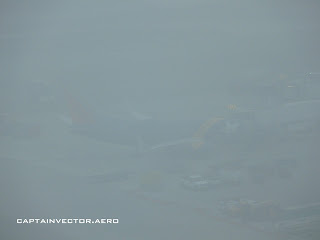 Both of those are just as they came out of the camera. It's impressive how fast the visibility can change at LAX.

And finally, another couple of shots that I can't take credit for. We see this way too often at LAX: 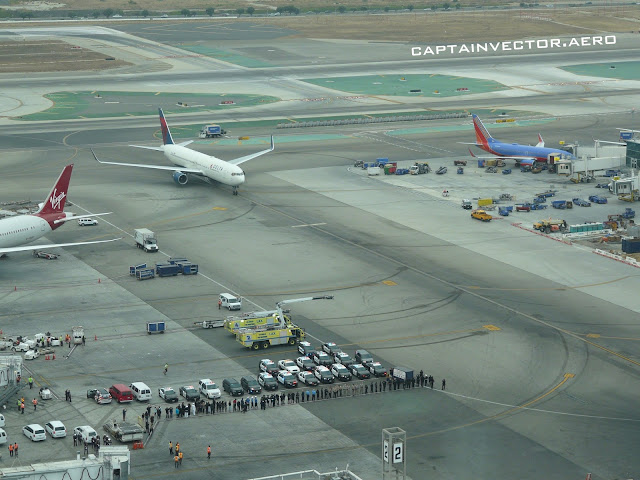 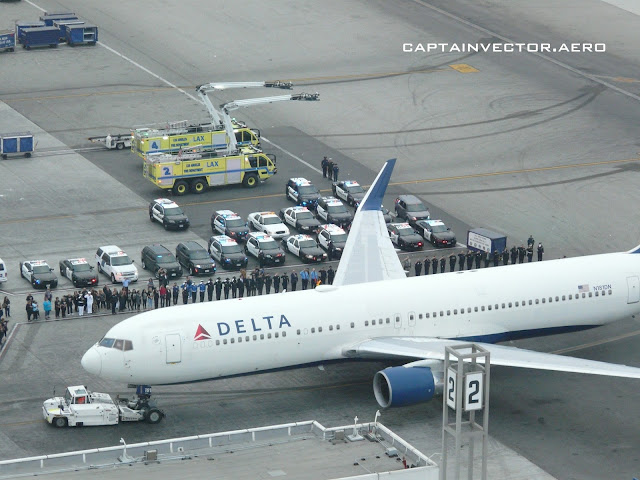 Posted by CaptainVector at 10:39 AM 2 comments:

Photo Friday: Southwest at the TBIT 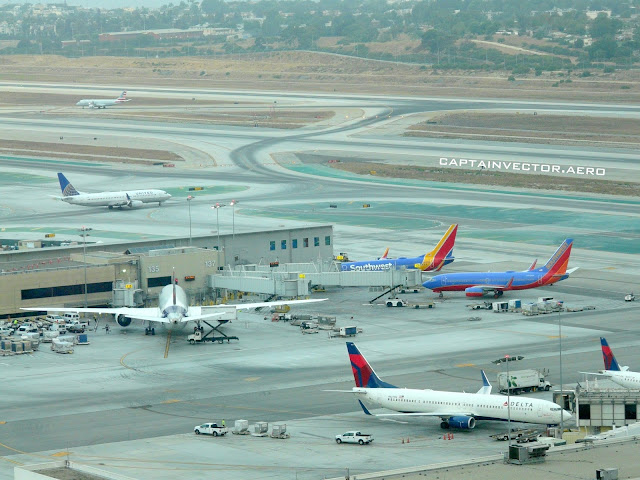 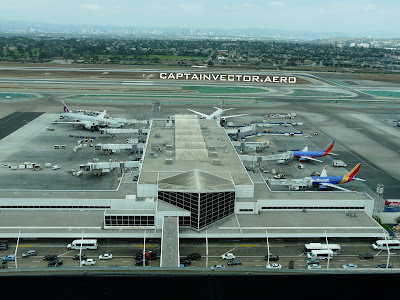 When they were using gates at Terminal 2, Southwest would usually reposition the aircraft to one of their Terminal 1 gates once the inbound passengers and cargo were unloaded. But now that their international arrivals are at the TBIT, most of those airplanes go back out as flights from the TBIT instead of repositioning. We've noticed Southwest buses running between the TBIT and a bus gate adjacent to Gate 12A. 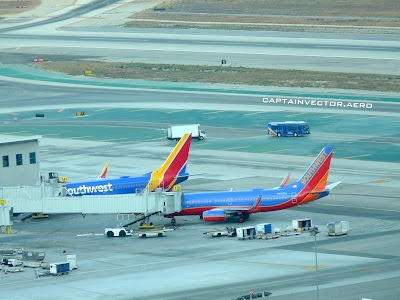 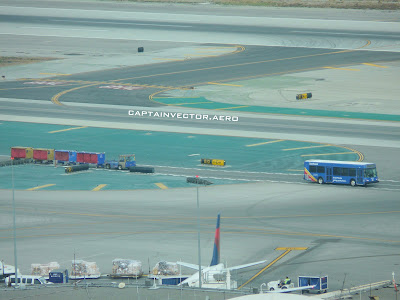 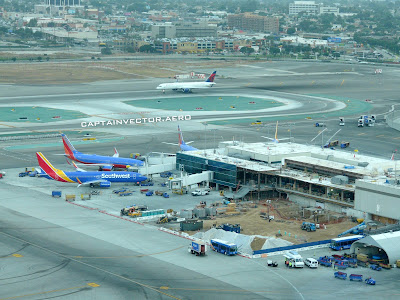 In the shot above, a bus can be seen between the construction area and the tent that houses baggage sorting, while another bus is waiting. The bus has to back down an alley that runs to the foot of the stairs, better seen in the shot below: 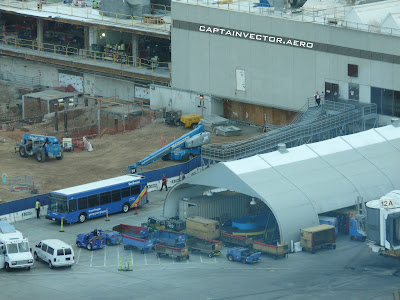 Occasionally, we'll see something else parked there: 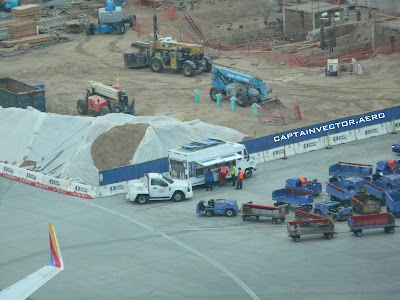 In rare instances, Southwest will actually be assigned Gate 151 at the TBIT. This gate is at the head of the C-10 alley, and is almost invisible from the tower. I've highlighted it in the shot below: 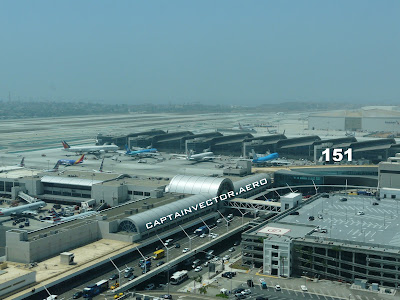 In the shot above. Southwest has just left Gate 151 and is about to exit the C-10 alley. You can see the open end of the jetway just under the first "1" of the 151 that I put in. Below is a shot of how the gate appears from the tower when it is occupied. Gate 151 is a narrow-body gate, most often used by COPA. As you can see, it's very difficult to see if someone is parked on this gate, and almost impossible to tell who it is: 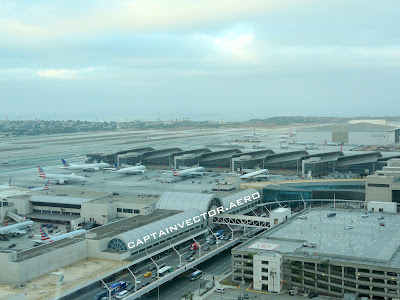