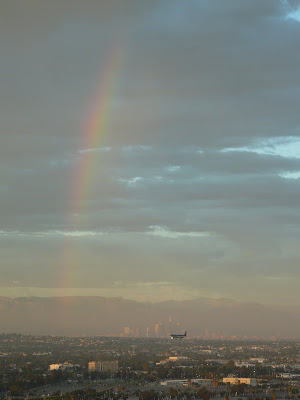 We had some rain today, and the skies always look nice afterwards. From these shots, it would appear that the proverbial pot of gold at the end of a rainbow is either downtown LA or the Fedex ramp! 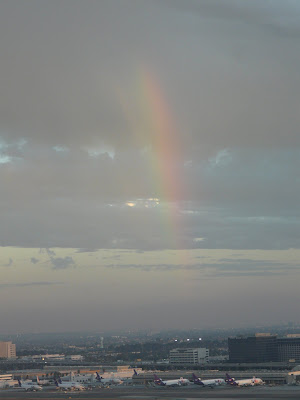 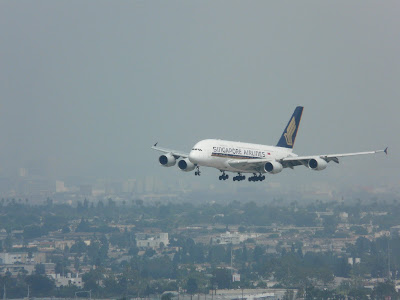 Since July, Singapore Airlines has been bringing their A380s into LAX on their daily midday service to/from Singapore (via Tokyo). I rarely get to see the late-lunchtime arrival, although I regularly see and work the mid-afternoon departure. However, I swapped shifts with a coworker recently to facilitate some production work at the theater, with the side benefit that I can share this photo sequence: 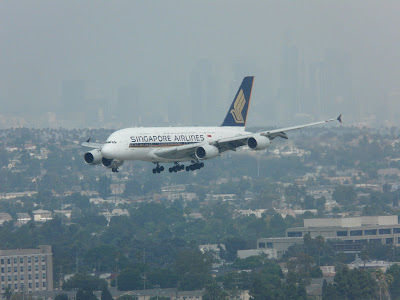 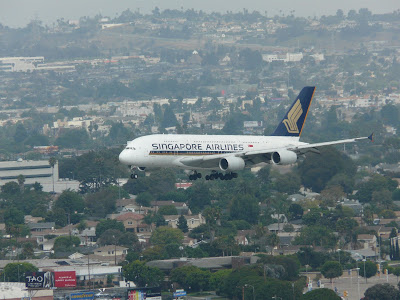 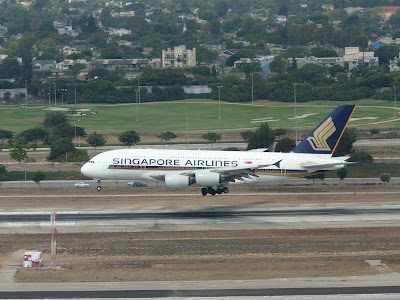 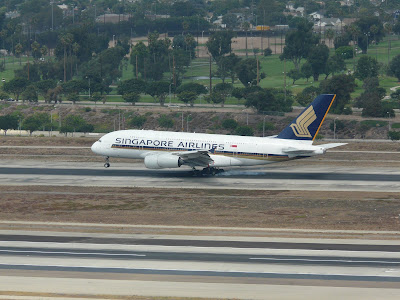 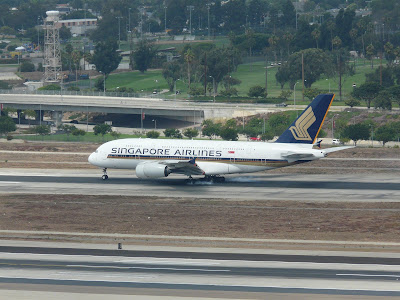 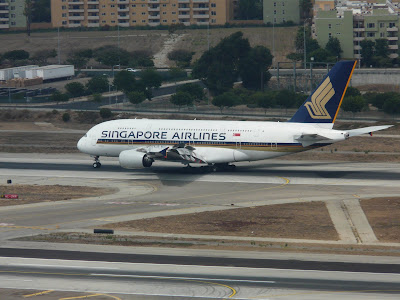 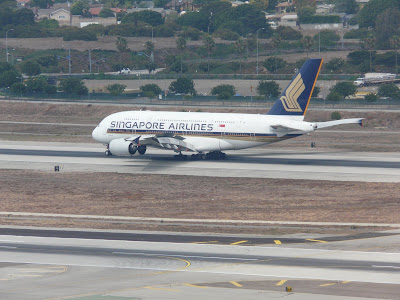 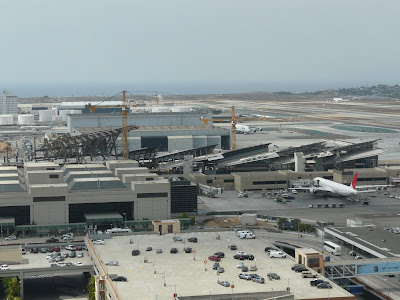 This pair of photos would look a lot better if there wasn't a great big honking crane in the middle of the shot - Those construction guys have no consideration! 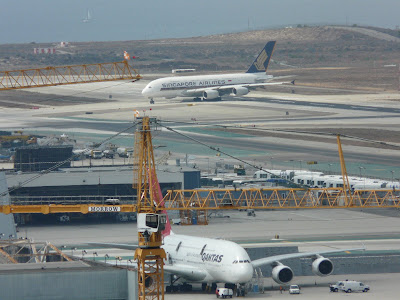 Sharp-eyed observers will have already noticed that we took Singapore all the way to the end of the runway, so that the A380 exited via Taxiway BB, as opposed to the more commonly- used Taxiway AA. Here's why: 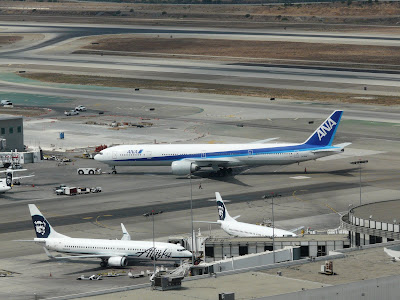 Singapore's assigned gate (123A) was not yet available. As I've mentioned before, there aren't very many places we can put the A380 without causing some degree of inconvenience. On the north side of the airport, the preferred spot to hold an A380 is on Taxiway E, just west of Taxiway AA. Thus the A380 exits via Taxiway BB and makes the left turn onto Taxiway E, then holds short of Taxiway AA. 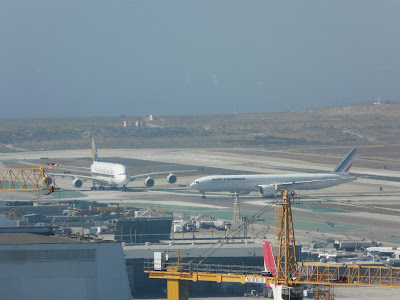 Here, an Air France B777 exits via Taxiway AA, and turns onto Taxiway Echo in front of the waiting A380 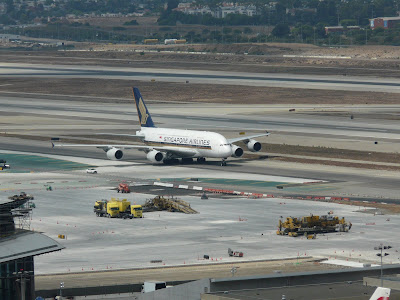 Speaking of construction, here you can see the nearly-finished Taxiway Delta extension. We are hoping to see this open up early next month. 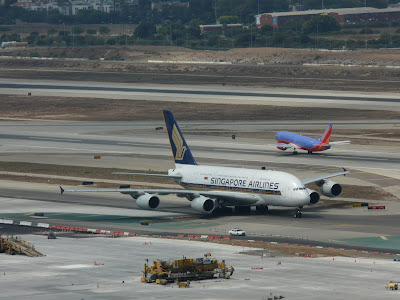 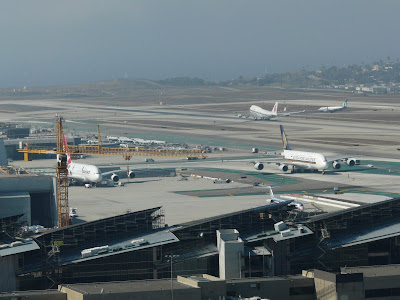 Bonus shot, added a couple of weeks after original posting, showing a Singapore A380 on the newly-opened Taxiway Delta passing by one of Qantas' A380s (but now, Taxiway Echo is closed: Win some, lose some) 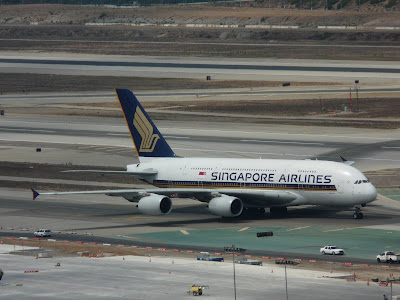 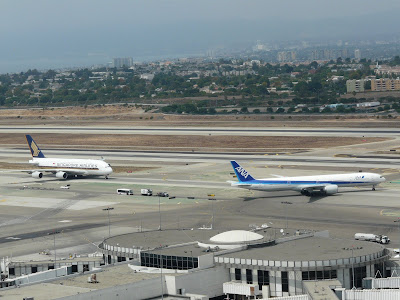 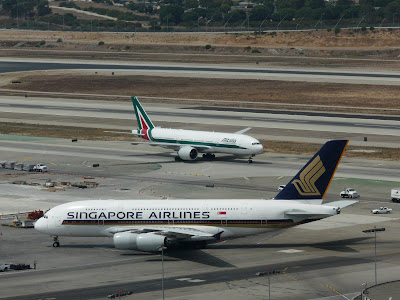 Posted by CaptainVector at 9:15 AM 2 comments:

Email ThisBlogThis!Share to TwitterShare to FacebookShare to Pinterest
Labels: A380, SIA 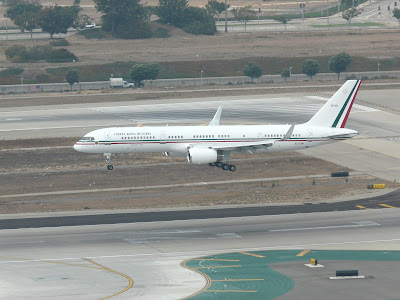 Mexican Air Force One arrives at LAX. El Presidente travels in a B757. 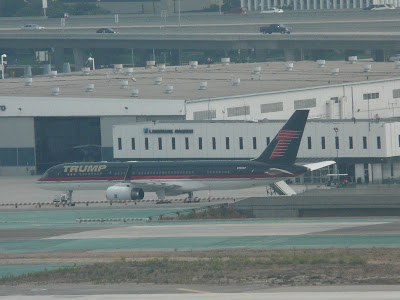 Apparently, so does The Donald.
Posted by CaptainVector at 8:22 PM 3 comments: 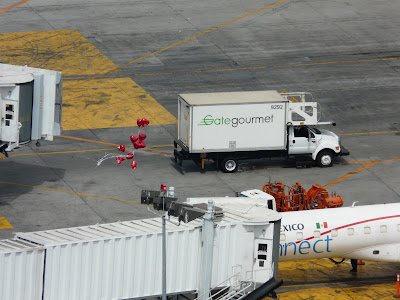 Today's post was stolen by flying monkeys. My apologies. 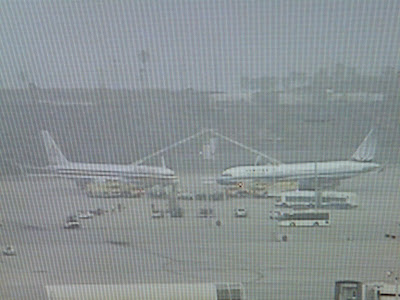 It's been ten years since the towers fell, and the world has never been the same. Just like the Challenger disaster, many of us will always remember where we were and what we were doing when we first heard about the twin towers. It was my day off, and oddly enough, I had walked to a neighbor's funeral that morning, and didn't understand the preacher's comments until much later in the day, when I finally got in the car and heard the radio.

American and United each lost two aircraft that day. Two of the four were B757s; the other two were B767s. The three September 11th aircraft that hit the twin towers (AAL 11 & UAL 175) and the Pentagon (AAL 77) were all originally destined for LAX; the fourth that crashed in Pennsylvania (UAL 93) was supposed to land in San Francisco. Between the four aircraft, 246 passengers and crew lost their lives, while over 2,700 more died on the ground.

A few weeks ago, a pair of Boeing 757s, one American and one United, were towed out to the remote gates at the west end of the airport. There, a photo shoot to mark the anniversary was staged with crews and trucks from the LAX Airport Rescue and Fire Fighting (ARFF) department. I worked the aircraft to and from the photo shoot, but this was the best shot I could get.
Posted by CaptainVector at 5:46 AM 1 comment:

Shot of the day 2 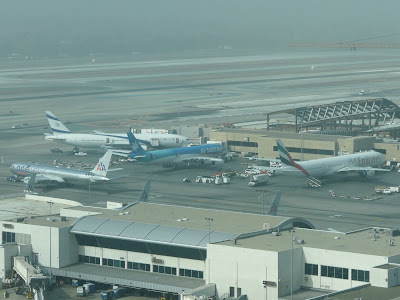 For all those who said it couldn't happen
Posted by CaptainVector at 11:10 PM 2 comments: 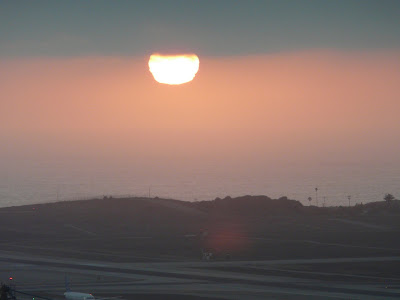 Posted by CaptainVector at 9:05 PM No comments: