Really not just another RJ 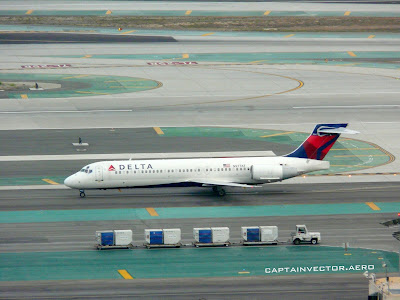 As many of you have noted, one of the aircraft in last time's shot is not a regional jet. Let's see that shot again: 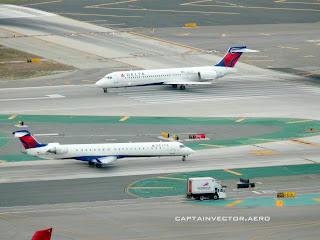 There is a hint in the photo: one of the airplanes is marked "Delta Connection" and the other is not. Many of you caught that the airplane on the runway, which is the one facing to the left in the picture above, is in fact a mainline Delta B717. The Delta Connection airplane really is an RJ, in this case a CRJ9 operated by SkyWest. 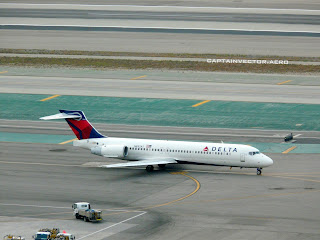 To some of you, the B717 may look very familiar -- though you don't remember it as a Boeing product. It takes very little imagination for this to look like the DC9's almost-identical twin. Which, in a manner of speaking, is pretty much what it is. The B717 is essentially a shortened version of the McDonnell Douglas MD-90 (which Delta also flies, although not into LAX right now). This model was to be called the MD-95, but Boeing took over before it went into production. The MD-90 was a revised and improved model developed from the MD-80, and the MD-80 was itself an improved version of the DC-9. So in a real sense, this B717 is the final iteration of the DC-9.

This is not the first aircraft to be labelled a B717; prior to this a shortened version of the B707 wore the name for a short while before becoming what is now known as the B720. Before that, there was another model 717: the aircraft now known as the C-135 or KC-135. Boeing's internal model designation for the C/KC-135 series was the model 717. 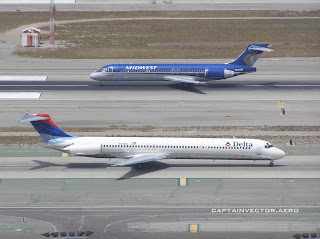 Before Midwest, AirTran operated B717s at LAX for a short while. The B717 is not a long-range airplane; LAX to Atlanta was too far, so they went into DFW. This was before AirTran added the B737 to their fleet; once those aircraft came online, LAX to Atlanta nonstops became a reality, and the AirTran B717s left LAX.

Except now they're back, flying for Delta. If you look closely, you can see that the Delta B717s all have tail numbers ending in "AT"; these were AirTran airplanes until Southwest took over AirTran. Southwest opted not to add a second aircraft type to its fleet, and so the B717s were sold off. They didn't have to go very far, though: AirTran and Delta both used Atlanta as a home base.

Since early this month at LAX, Delta is using the B717s on regional routes, mostly up and down the coast -- on routes that have often been served (and in most cases, still are) by SkyWest CRJs and/or Compass E175s.  The B717 is bigger than the largest of these, the CRJ9 -- but just barely. I won't go into comparing all the specifications, although I will give you links for them below. The most important (from an airline perspective) number is passenger seating: Delta's B717s are configured for 110 passengers; the CRJ9s that SkyWest flies for Delta are set up for 76 passengers. Going the other direction, the next largest airplane in the mainline Delta fleet are the Boeing B737-700 and the Airbus A319. These seat 124 and 126 passengers, respectively, but neither of these are seen at LAX very much.

Since this has become pretty much an entry about Delta, I'll close with one more photo from the archives -- one that features three Delta aircraft that are no longer seen at LAX:

Posted by CaptainVector at 12:13 AM 6 comments:

Not just another RJ 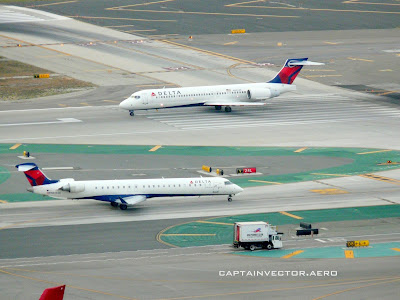 I've been meaning to do a piece on regional jets. We see dozens of them each day at LAX, and some of them aren't so regional anymore. For instance, take a quick glance at the opening photo. Looks like a pair of RJs in Delta colors about to depart off runway 24 Right. Right?

Not so fast! One of these planes is not an RJ. Care to guess which one? You've got a 50-50 chance, and no cheating with the registration numbers.
Posted by CaptainVector at 10:27 PM 16 comments: 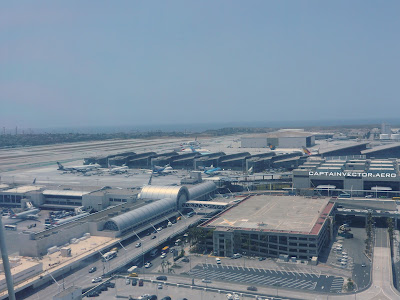 Continuing the theme from yesterday: If four A380s is good, then five must be better!
Posted by CaptainVector at 9:08 PM 2 comments:

Email ThisBlogThis!Share to TwitterShare to FacebookShare to Pinterest
Labels: A380, A388 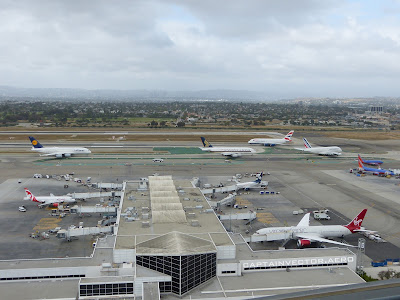 There was a time when having four A380s on the ground at LAX was kind of a big thing. Some time later, I can remember the first time I had four A380s moving on my frequency at one time. Now, it's not even that big a deal to have four of them at the runway for departure. This is kind of a bigger thing than it seems, though, because the runway and parallel taxiway are so close together that if we have an A380 departing, any other A380 on the parallel taxiway must be within the first 1,500 feet of the beginning of the runway. As a result, the ground controller either has to meter out the A380 departures one at a time, and hold the other(s) back, or get all of them out there all at once, which is what you see here. This is a normal cluster of A380 departures that usually happens around 4 PM, although we don't normally get all four of them leaving at exactly the same time; however getting three of them together is pretty common. If it had been just a few minutes earlier, there could have been a fifth A380 in the picture, as Emirates has just arrived on runway 24 Right.
Posted by CaptainVector at 9:03 PM 7 comments: