How to tell you're having a bad day 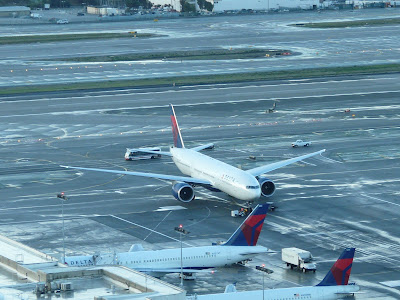 I was working with my current trainee on ground control the other morning when this happened. We had just been discussing how he should be making "Plan B" at the same time he's making "Plan A" so that if Plan A doesn't work out he'll already know what he's going to do next.*

This B777 was stuck in the position shown here for about ten minutes, completely blocking the intersection of C and C-9. At certain times of day, something like this can really throw a wrench into the operation. Fortunately, this was not one of those times. 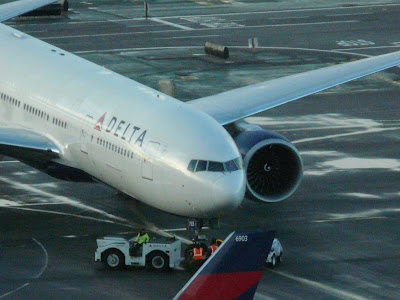 This close-up was taken a few minutes prior to the opening shot, and gives a better view of what's happened. Hint 1: The tug was towing the airplane along that curving yellow lead-in line in the lower left corner of the photo. Hint 2: Anytime that many guys are all gathered around looking at something, it can't be good. Hint 3: The airplane is normally supposed to be behind the tug. Hint 4: Look at the angle of the airplane's nosewheel.

* ATC101: This is a standard practice among controllers; it's what we do. You evaluate the situation and make a plan for how to resolve it. While making Plan A, you're also making Plan B so that you don't have to think about what to do next if Plan A doesn't work out. While making Plans A & B, you should also have a good idea of what Plan C may need to be, and at least an inkling of what Plan D might be. More simply stated: Always have an "out" (aka "exit strategy" or "escape hatch")
Posted by CaptainVector at 7:57 AM 4 comments:

Home for the holidays 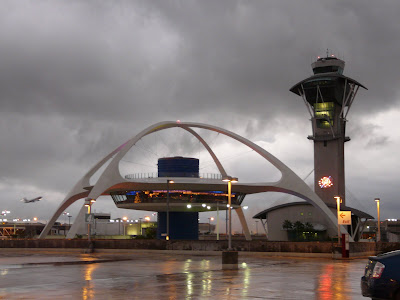 They say that timing is everything, and I guess that's so. It certainly was for me, having been away from LA for the last week. It was drizzling and sprinkling from gray skies as I left, and the news has been full of stories about record rain in California ever since. The rain finally let up yesterday afternoon, just in time for my flight to arrive. We landed on runway 25 left, and as we came down the final, the view out my neighbor's window was of a city standing in water. Every street and highway (and Hawthorne's runway) glistened with sunlight reflecting off the puddles, lakes, and rivers that covered them. Once I was in the car, the radio traffic reports covered a long list of streets and highways that had lane closures - or were closed completely - due to flooding. After I drove home through a continuous sprinkle, the rain resumed.

While the storms have now moved on, it will take LA some time to get back to what passes for normal out here. During my absence from LAX, it sounds like things were hectic: Holiday traffic, lots of rainy weather, and east traffic. I've discussed east traffic at LAX before, so suffice to say that it makes everybody a little bit crazy and tends to slow things down a bit. My current trainee was due for certification checkrides on ground control, so I'm glad we got to do a few hours of east traffic last month. 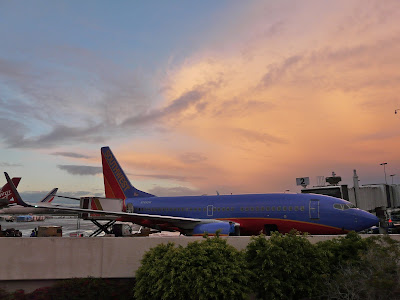 A special shout-out to the crew of Southwest 267. Will, Chris, Nancy, Craig, and Donna all did a great job with a full-to-the-gills planeload of holiday travelers, including at least three screaming babies. The guys up front had a special Fasten Seatbelt sign: Every time we hit some bumps, they'd turn it on, whereupon the bumps would stop. Magic! Here's hoping that your holiday travels go smoothly, where ever you're headed . . . be it the comfort of the barn or greener pastures. 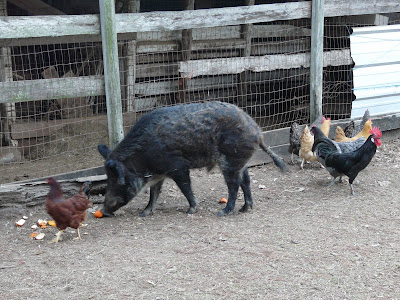 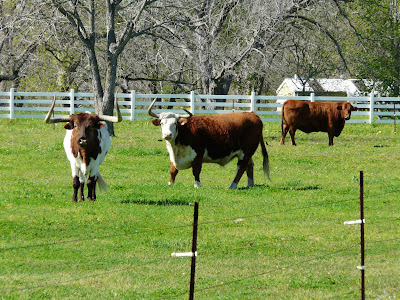 Posted by CaptainVector at 1:30 PM 3 comments:

A while back, I showed you a picture of a Sun Country airplane that they had obviously gotten from somebody else: 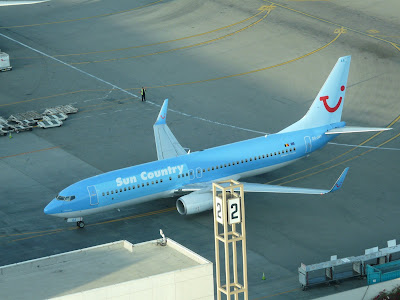 Well, they've done it again; this is not a great photo, but it's enough to see that this B738 used to fly for another carrier. I've held off bringing you this in hopes that I'd have a chance to get a better photo, preferably day time, of this aircraft. But since we came off of Daylight Savings Time, Sun Country's schedule seems to preclude that for the time being: 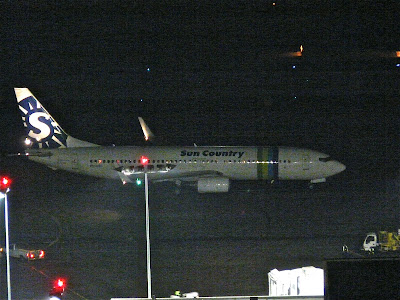 So, any guesses where this airplane came from? If so, post yours in the comments. 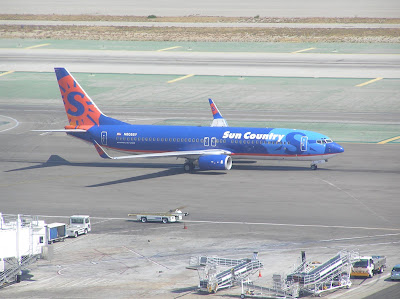 As a refresher, here's what we expect Sun Country airplanes to look like!

Posted by CaptainVector at 8:45 AM 10 comments: 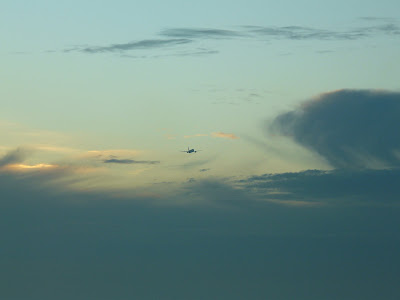 The first week of December has brought some different weather, and thus some opportunities for interesting photos. 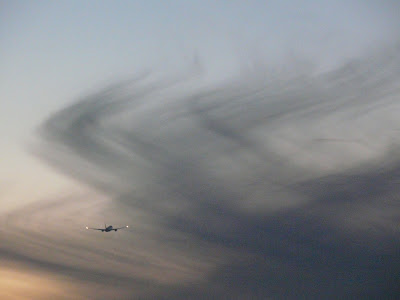 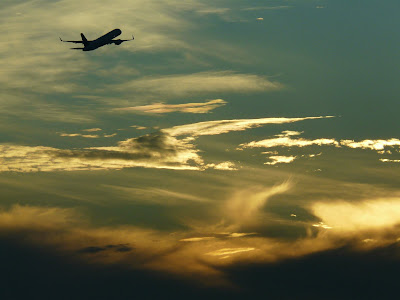 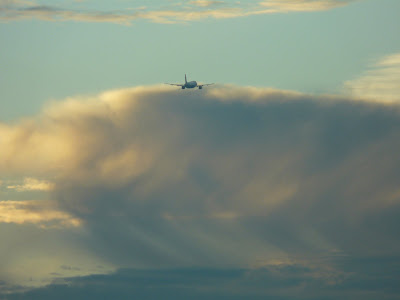 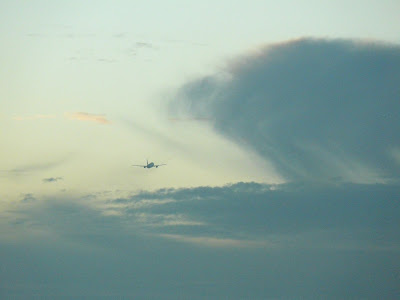 I should have checked to see if anyone on this plane was named Jonah.

I know I've shown you a bunch of fog and marine layer shots, so how about a couple more: 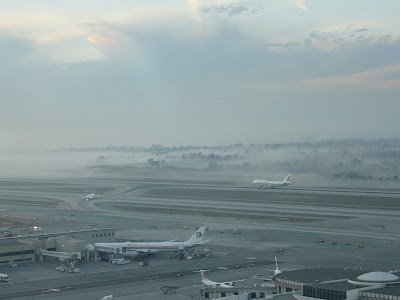 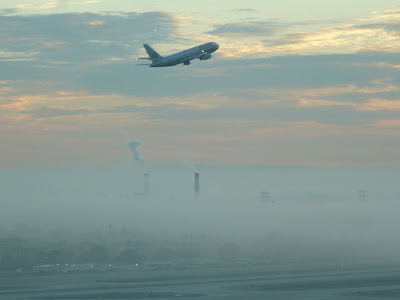 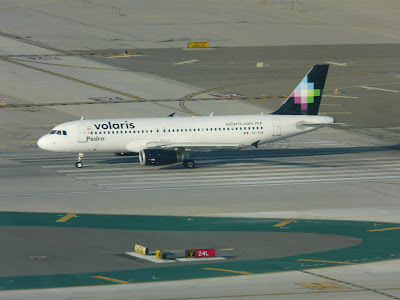 Volaris has started bringing in A320s in addition to their A319s. What's funny is that apparently their dispatchers don't know, because all the flight plans say "A319" 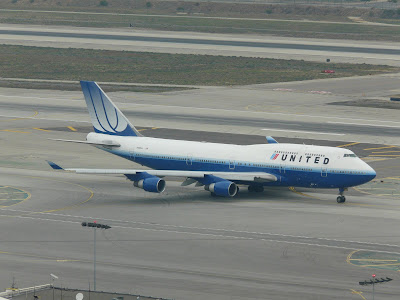 Santa 17, a special flight for Make-A-Wish, taxies out for departure. 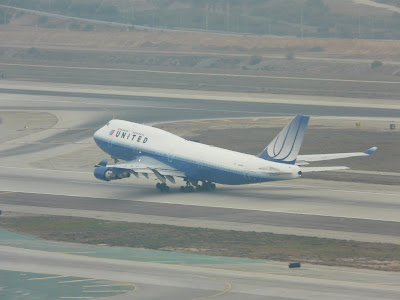 And away they go! 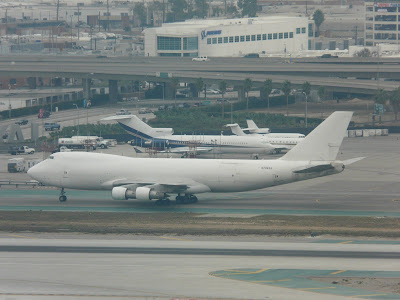 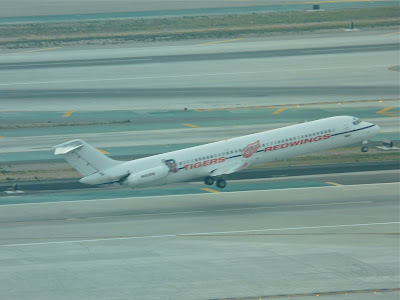 A couple more old birds that are becoming less common: another B727 (in this case a -200) and a 50-series DC9; both are sports team airplanes. 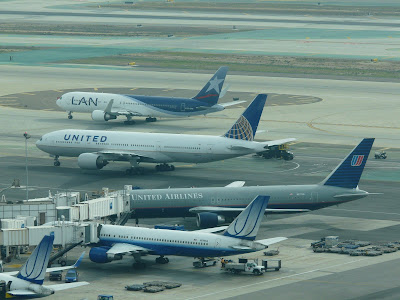 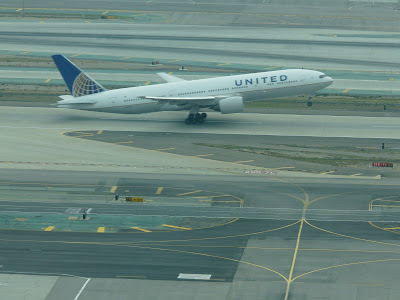 While we've been seeing Continental aircraft with the United name for a little while now, they're stll being operated as Continental flights. This B772 is the first one I've seen operated as a United flight. 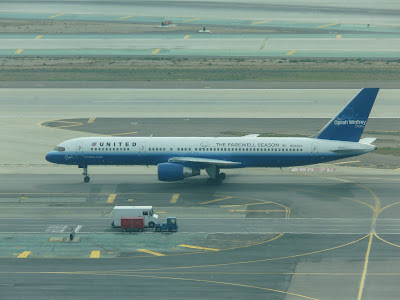 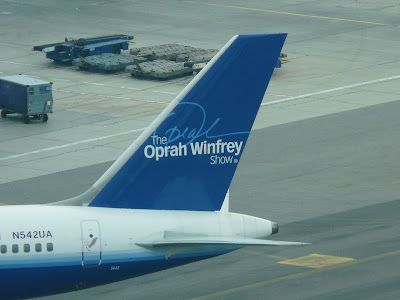 And here's another different-looking United 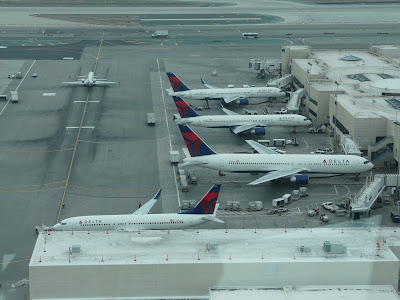 Hey guys - How about a caption contest? If you've got an idea for a caption for this photo, post it in the comments section.
Posted by CaptainVector at 8:26 PM 7 comments: