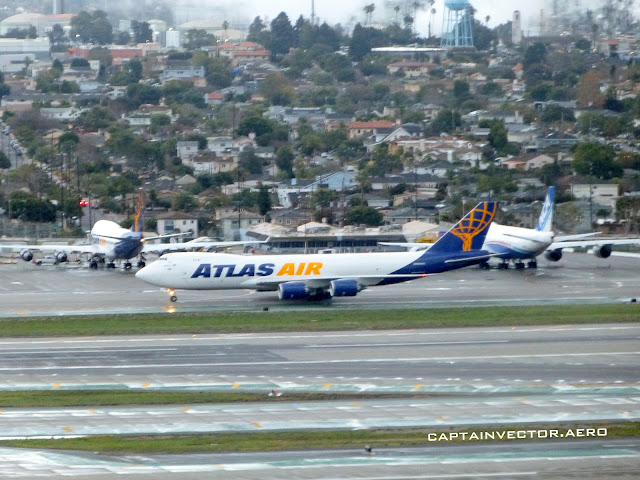 Last night, the final B747 rolled out of the final assembly building in Everett, Washington. During the 53-year production run, Boeing built 1,574 B747s. Pan Am was the launch customer, with their first B747 entering service in 1970. Delta was the last US passenger carrier to operate B747s, retiring them in 2017. At LAX we do still see B747 passenger operations with Lufthansa and Korean, both of whom bring in B747-8s. Korean uses the B747-8 in both passenger and cargo operations, and we have a good many other cargo operators bringing B747s through LAX. The final B747 built is a cargo variant, and will be going to Atlas Air. I expect that it will come out of the paint shop looking much like its sister ship in the photo above, and hopefully we will get to see it pass through LAX once it enters service next year.

Dual taxi in the D-9 alley 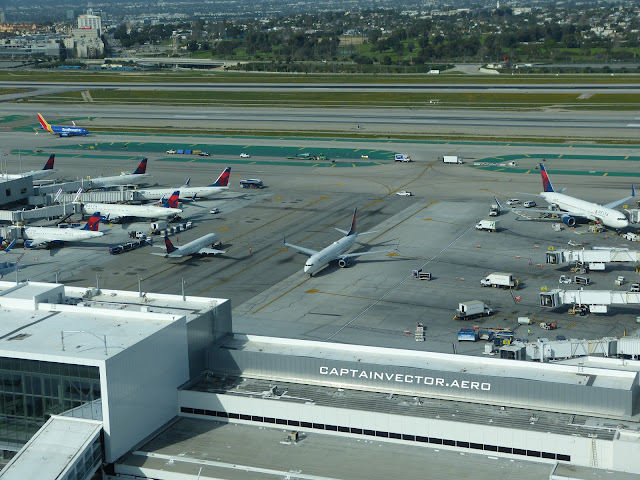 A recent comment asked about dual-taxi in the D-9 alley. This photo illustrates the D-9 alley with a dual-taxi operation taking place. The alley is marked with a taxi centerline, as well as east and west lines. This feature allows two flows of traffic in the alley, such as seen here, with one coming in and another heading out. It is also possible to have two lines of aircraft outbound or inbound. The restriction on this operation is determined by the aircraft types involved; A320-series and B737-series are the largest types that can safely use the east and west lines. Anything larger, such as a B757, has to use the center line: 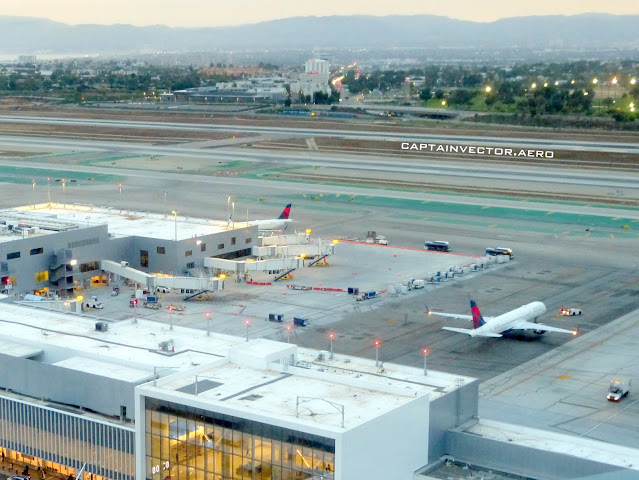 Here's another shot that better shows the three taxi lines: 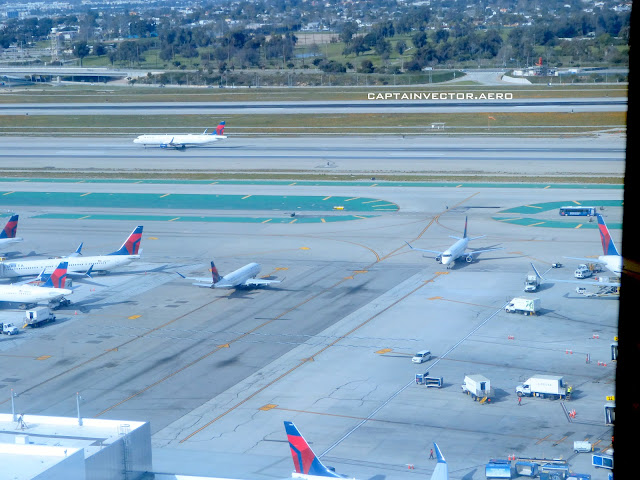 Posted by CaptainVector at 6:10 PM No comments:

Another look at ITA's "ghost" livery 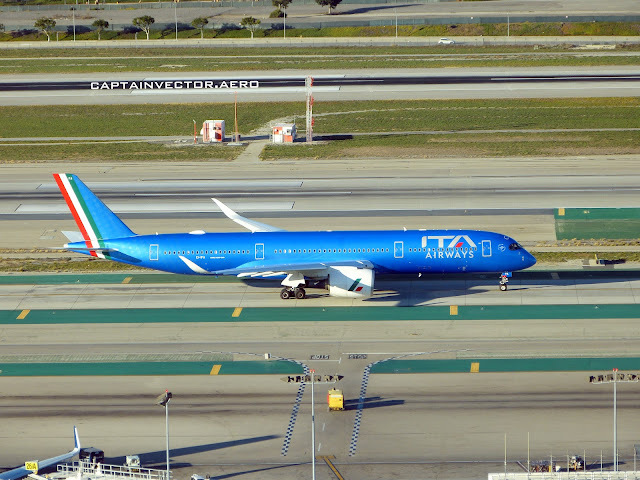 I have to admit that I like ITA's paint scheme. Nowadays, nearly all air carriers have gone to boring white airplanes with a logo on the tail. ITA is one of the notable exceptions, with their bright blue Airbuses that sport the Italian tricolor stripes on the tail. The inspiration for the blue comes from the Italian national football team, the Azzurri (the Blues), who wear blue in honor of the House of Savoy. Besides the tricolor stripes, the tail section also features a faint pattern that is reminiscent of a Louis Vuitton handbag. I know that's not what it actually is, but I have yet to find any official reference to it beyond the photos in the company's press materials. This pattern is hard to see, even in daylight, and I've had very little success catching it with the camera. These shots show it, but I've borrowed an official photo that shows it much more clearly. 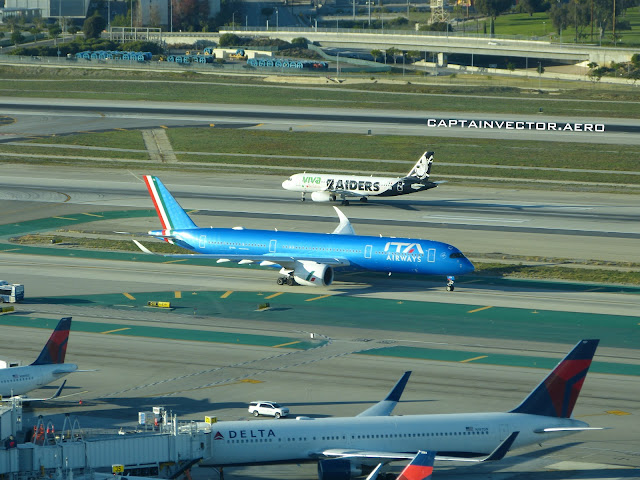 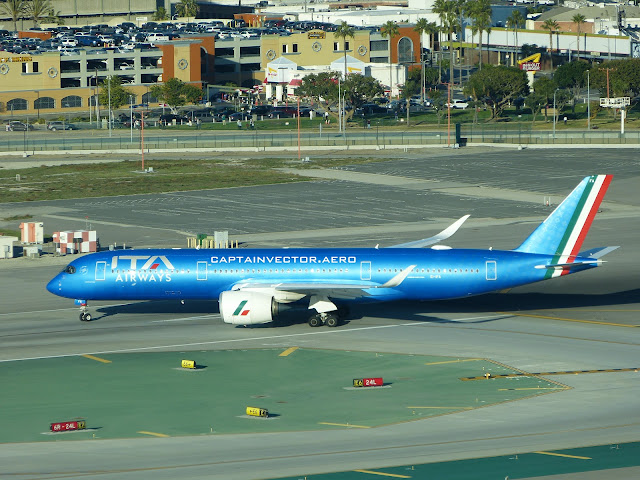 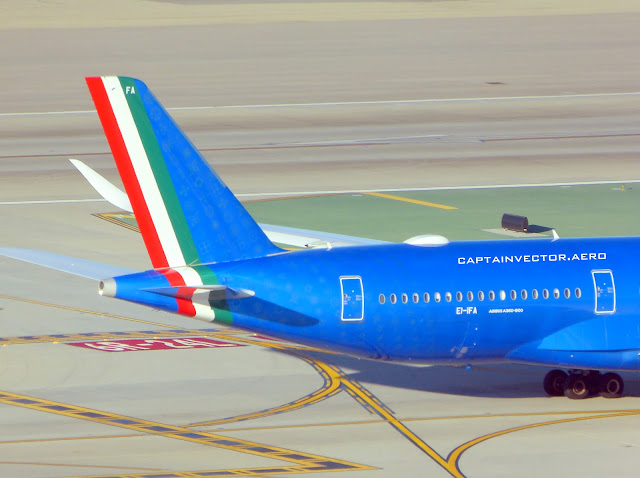 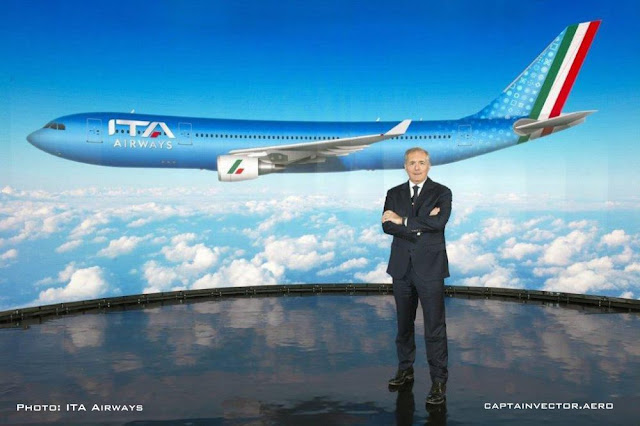 Posted by CaptainVector at 3:59 PM No comments: 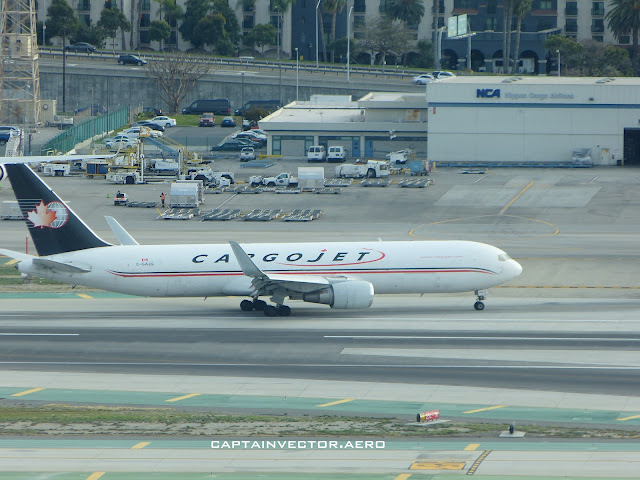 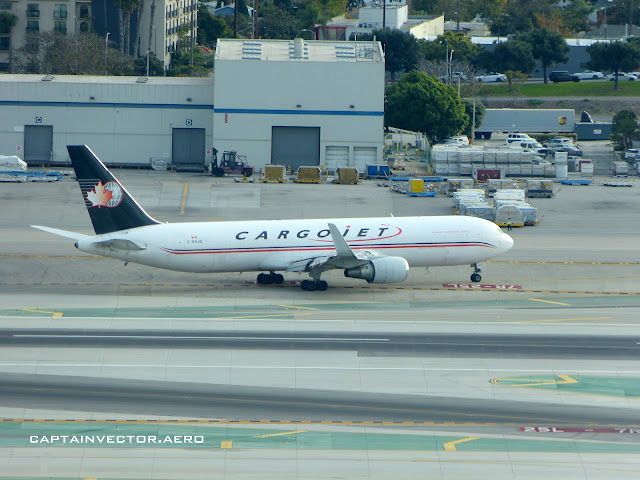 Posted by CaptainVector at 8:56 PM No comments: