Now that I have your attention, let's talk numbers. Last time, I mentioned that LAX's traffic, as measured by aircraft movements, is down to a bit less than half of what it would normally be at this time of year. While this information is freely available via public sources, let me share with you our informal in-house traffic count calendar. I'll start with what a normal July looks like at LAX, in this case last summer:

As you can see, we were averaging around 2000 operations per day. Saturdays are generally our slowest day of the week; our busiest tends to be either Thursday or Friday. Now, take a look at what's been happening this summer:

It hasn't been this way the whole year; we started out with a normal looking January:


I don't have complete data for February, but what I did see had nothing out of the ordinary. March started out the same way, but while that month normally sees traffic build for spring break, this year it did exactly the opposite as the COVID "stay at home" orders and travel restrictions took effect:


In my March 27 post, written after I left work around ten that evening, I speculated that we were about to have our first day of less than one thousand operations. As it so happened, the last Thursday in March was the last time that LAX ran more than one thousand ops in a day; we've been in triple digits ever since. The flight cancellations that began in March really got serious in April and May:

Our slowest day of the the year has been Monday, April 20, with a whopping 405 operations for the entire day. That's not much busier than my very first facility in Monroe, Louisiana! After that nadir, traffic levels increased somewhat as we worked our way through June:

Just for the sake of comparison, here's the count for June of a year ago:

In early June, we were told that the airlines were expecting to ramp up their schedules for July, and that we should be prepared to see around 1,400 operations per day. Preparations were made to bring more controllers in so that more positions could be opened. But, as you can see above, we peaked (so far) in mid-July at 956 ops for the day on Friday the 17th. As I write this in early August, we still have yet to attain the 1000 level again.
Last minute update: Just before posting, I called to verify our numbers. Our new peak of 974 was reached last Friday, the 7th. Not yet back up to a thousand, but we're getting there!

Posted by CaptainVector at 12:26 PM No comments: 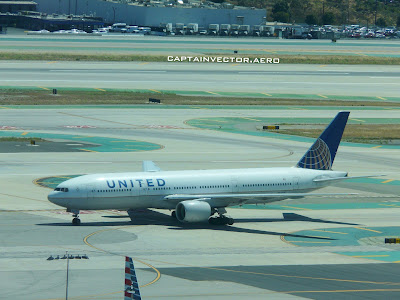 Welcome to the dog days of summer - at least, for those of us in the northern hemisphere, that is. I'm almost afraid to say anything for fear of jinxing it, but thus far, we've been blessed with a very mild summer here in Los Angeles. To be fair, we tend to get our hottest weather in September, so we have that to look forward to. By pretty much any measure, the summer of 2020 is an odd one. Much of the rest of the world has figured out how to deal with the COVID-19 virus, but the United States has gone off in our own direction. I won't get any deeper into it than that, except to say that air traffic (as measured by aircraft movements) at LAX is about half of what it normally would be. If you look at passenger statistics, we're down by way more than half. I don't know what the current statistic is, but at one point passenger volume was down by ninety-something percent from last year's level.

We have seen an upswing in cargo operations, including passenger aircraft that have been repurposed to carry freight. There has also been a rise in the number of general aviation aircraft passing through LAX. After the traffic count numbers plummeted, Los Angeles World Airports (aka LAWA), who is the authority that operates LAX, relaxed the restriction on small aircraft landing and then departing again at LAX. Normally, any aircraft that lands at LAX is expected to go park somewhere; student and practice operations are not permitted. This summer, we've been allowed to have small aircraft land and taxi back for departure, and some local pilots have taken the opportunity to add LAX to their logbooks.

There doesn't seem to be anything noteworthy about the opening photo -- unless you run the registration of this United B777. When you do, you'll discover that this aircraft is the first B777 to enter commercial service. United was the launch customer for the B777, and this one has been flying since 1995! Special thanks to MX for the heads-up on this when it passed through!
Posted by CaptainVector at 10:23 PM 1 comment: