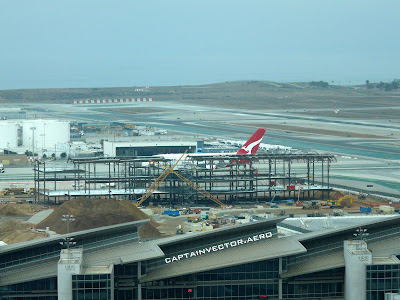 The weather has not been all that conducive to taking good photos this week, so this edition of Photo Friday is going to stick to updates on some of the construction on the airport. The big news, for which I don't seem to have a photo, is that Runway 25 Right has fully reopened. It has been shortened at the west end for construction of the runway end safety area for months now, but we got the full length back earlier this week.

The opening shot shows dueling cranes last weekend. The A380 behind on Taxiway R isn't completely hidden, but it looks like smaller aircraft will completely disappear behind the new terminal. Here's another view, taken yesterday. In this shot, the Korean A380 is on a temporary parking area called the North Pad, which will eventually make way for the Taxiway T extension. 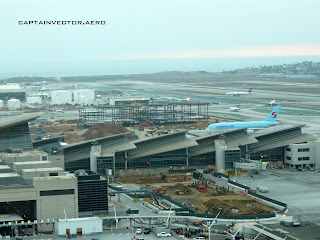 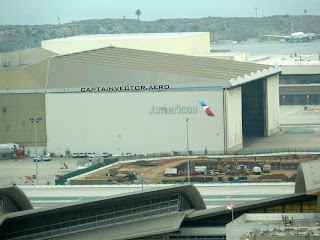 In previous postings, I've shown you the on-going work at Terminal 1. In a comment, I mentioned that similar work is happening at Terminal 8 as well. As seen in this shot, Gate 84 is currently under renovation: 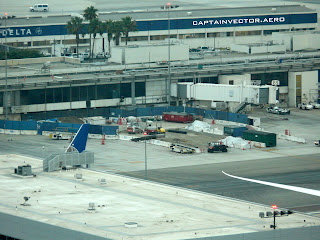 Posted by CaptainVector at 4:27 PM No comments: 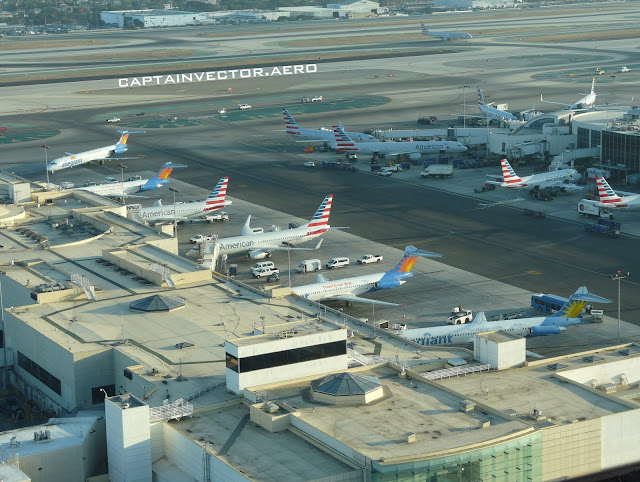 Back in May, I chronicled the disappearance of the MD-80 from the LAX scene. Last weekend, someone at Allegiant apparently took exception and decided to show me that I had it wrong! 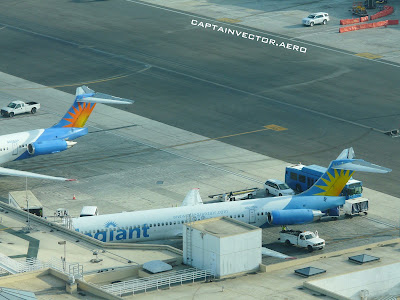 Here's an interesting thing: the sunbursts on these two appear to be the reverse of each other; one is orange at the center with yellow spikes, while the other is yellow centered with orange spikes.
Posted by CaptainVector at 9:37 AM No comments:

So what was wrong about that photo? 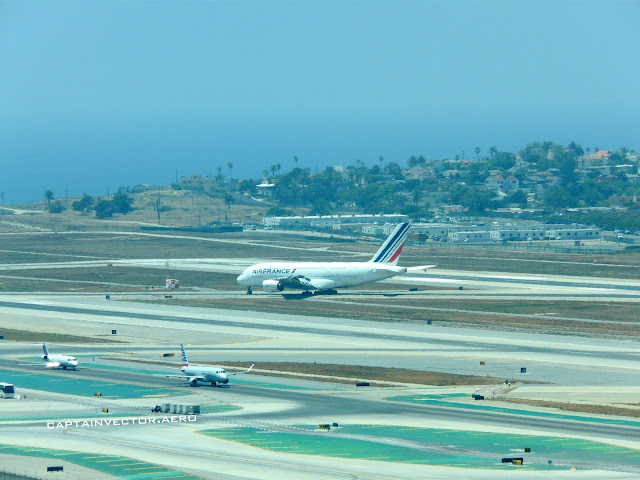 Nearly a month ago, I showed you this shot and asked what was wrong here. Apologies both for the poor quality of the photo and the wait for an explanation. Several of you guessed it though: the A380 has exited Runway 24 Right onto Taxiway AA. This by itself isn't a problem, as AA is a taxiway which the A380 is allowed to use. The catch, as one of you also noted, is that while the A380 is allowed to use that taxiway, it shuts down both runways (24L and 24R) when it does so. The A380 cannot hold short of Runway 24 Left on AA because even if the nose of the airplane is clear of the hold line, the left wingtip extends into the runway safety area. Thus, there is no advantage to the controller to allow the A380 to exit onto AA unless there is no pending traffic for Runway 24 Left. The usual technique is to send the A380 to the end of Runway 24 Right so that it will exit onto Taxiway BB. On BB, the A380 is able to hold short of Runway 24 Left, and therefore allow the controller to continue to use that runway for traffic. This is normally done to enable one or two more departures to take off before the next arrival to Runway 24 Right. The next 24R arrival forces the controller to send the A380 across 24L, because the A380 holding short of 24L on BB is still fouling 24R. This is just one of the many tricks and catches to having the A380 at LAX. For those of you playing the home game, have a look at some obsolete samples of the quick reference diagrams that we have. Please note that these are solely for your reading enjoyment, and are not to be used for navigation: 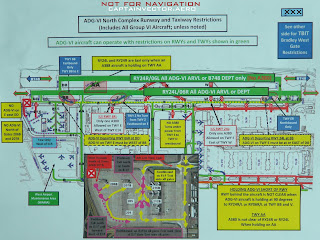 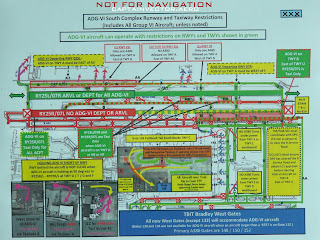 Posted by CaptainVector at 10:20 PM 2 comments: 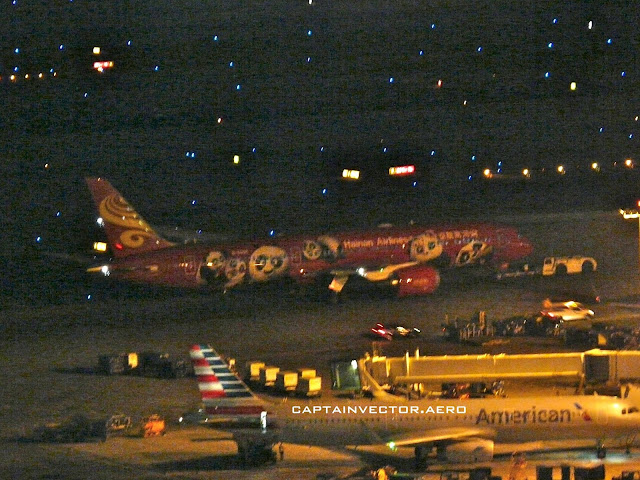 This week opens with a very late night shot from earlier this week. Hainan's Dreamliners are pretty colorful, but this one was worth even a lousy photo. 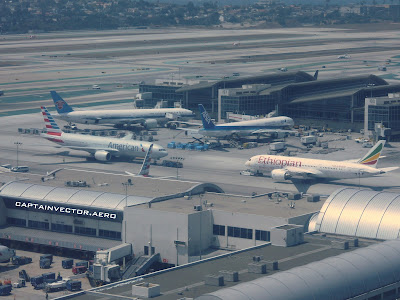 I glanced up and just had a chance to shoot this through the window shades; can't tell you how they fixed it! 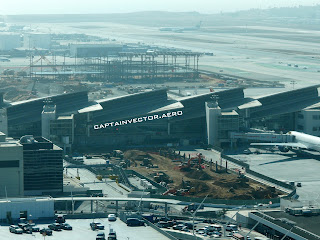 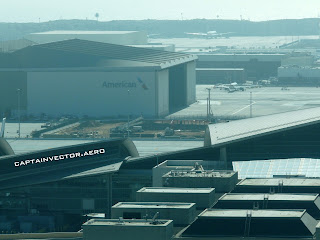 And just for fun, here are a couple of shots from the archives:

Posted by CaptainVector at 11:00 AM No comments: 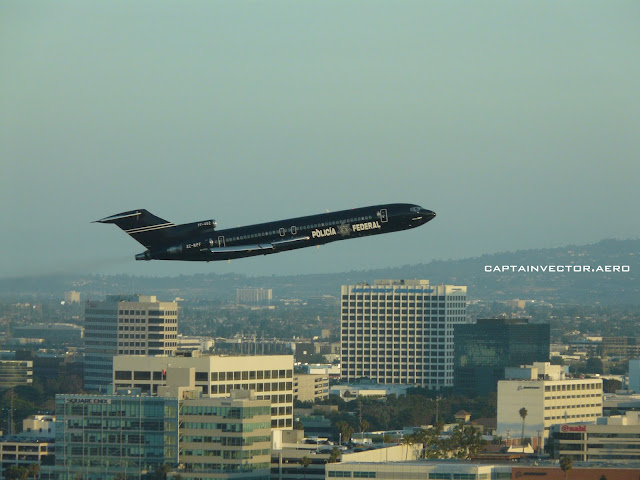 A bit of randomness this week - enjoy! 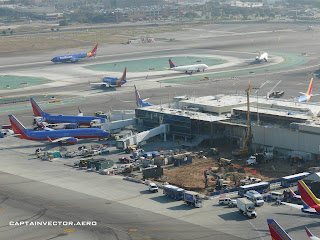 For variety, this week's construction update looks at Terminal One, where another jetway has been installed. I'm guessing that this will be Gate 16. The adjacent gate is 18A, and the two tails in the bottom corner are 12A and 10. The bare dirt area will eventually become 14, and we may also have a 12B. 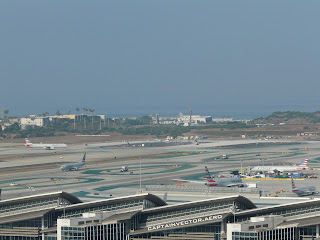 Here is a look at the departure end of Runway 25R, which is currently shortened for the construction of a runway end safety area. Until a couple of weeks ago, the intersecting and adjacent taxiways were also closed, which made for some interesting challenges for tower and ground controllers. The intersection where the American Airbus is waiting to cross was closed, so aircraft that ended up at the west end of Taxiway H had to turn left and cross Runway 25L - which is usually exactly opposite of where they need to go. This establishment of a Runway End Safety Area is similar to the work that has already been accomplished on Runway 24L/6R on the north side. The RESA establishes a paved overrun (stopway) at the ends of the runway so that an airplane that runs off the end doesn't immediately hit something. While LAX hasn't had an incident of this sort lately, there are two accidents that come to mind immediately which illustrate the need. Both happen to involve Southwest, although a little research reveals plenty of similar accidents with other carriers. See this Wikipedia entry for more: Southwest_Airlines_Flight_1248 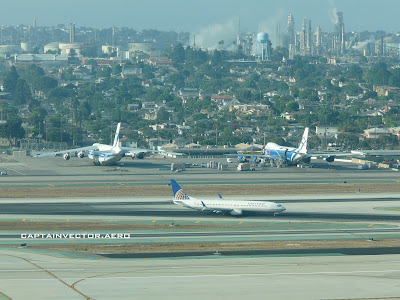 Double trouble:  An Antonov 124 and a Boeing 747-8F on the Imperial Terminal ramp. Both of these, along with the Airbus 380 and the Lockheed C5, are Design Group 6 aircraft. If you want some insight into ADG-6 operations at LAX, here is a pdf copy of the LAX ADG-6 Operation Plan on the LAWA website. Meanwhile, the innocent United in the foreground is a B737-900.
Posted by CaptainVector at 10:33 AM 4 comments: