I saw this strip yesterday, and happened to notice something interesting. Any guesses? 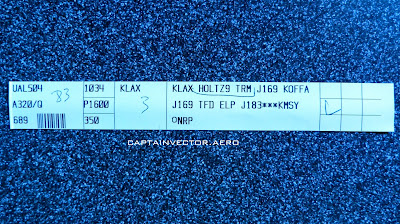 I was scrolling through my photo archive the other day, looking for the Southwest Triple Crown One shot I used earlier this week. Along the way, I started noticing pictures of aircraft and liveries that we don't see any longer at LAX, and that seemed worth sharing.

The Prez comes to town 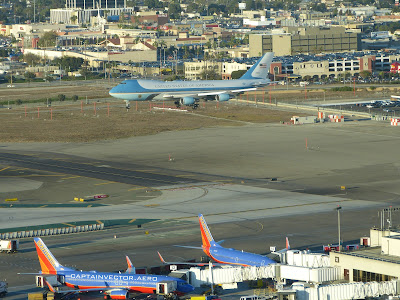 The president stopped by this afternoon for an appearance on the Tonight Show. It was a quick in-and-out again visit; I think he was on the ground for maybe two hours. 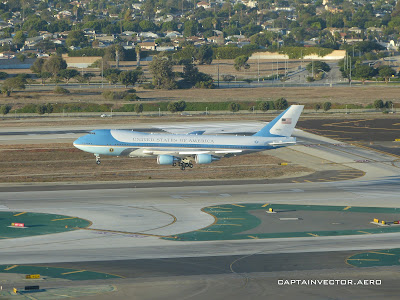 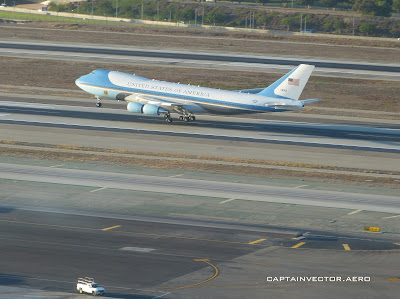 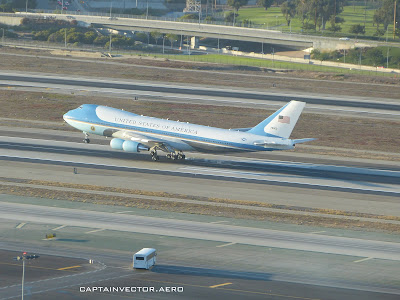 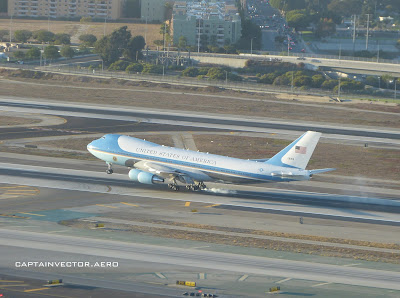 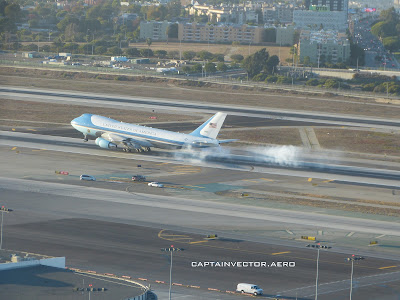 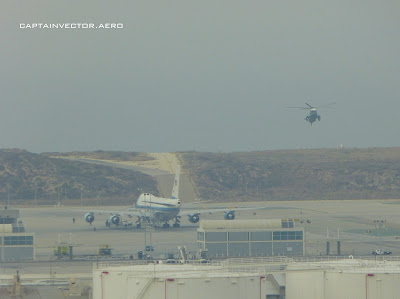 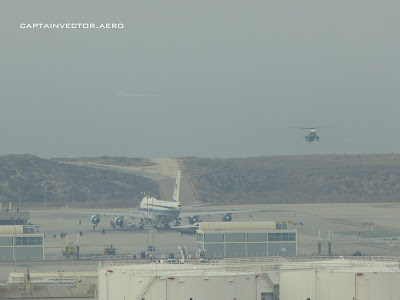 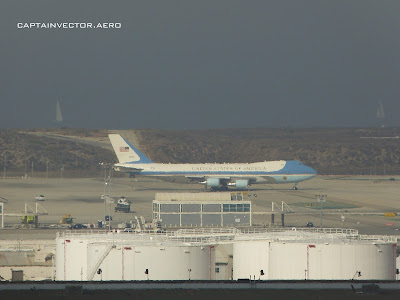 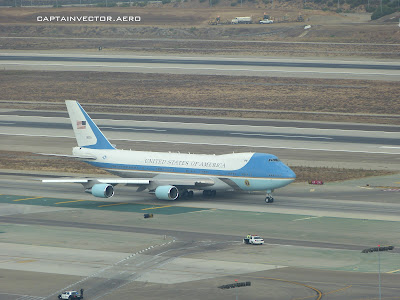 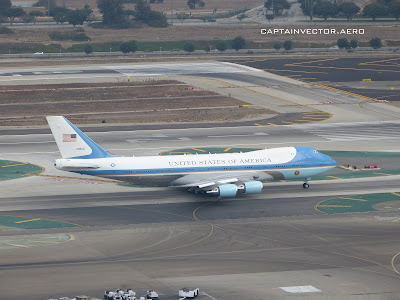 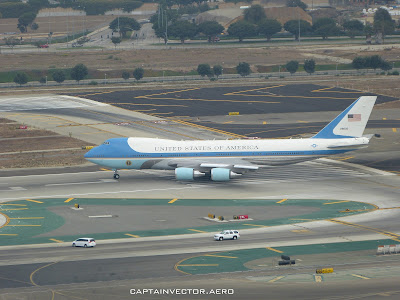 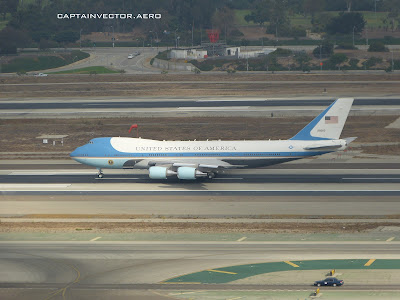 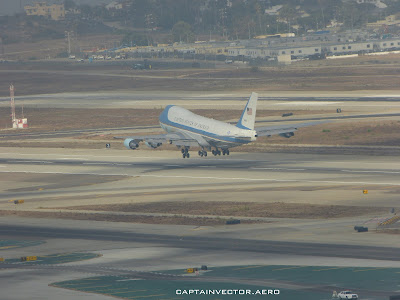 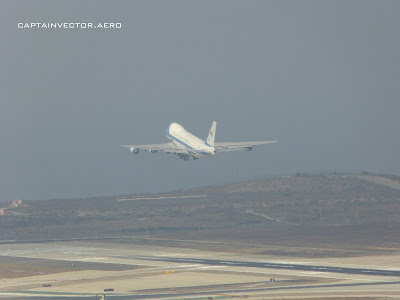 Posted by CaptainVector at 1:37 AM 2 comments:

What was wrong with those photos

Although I couldn't definitely remember why I had selected those two photos as candidates for the What's wrong with this photo series, I figured that you guys would find something noteworthy about each. Which you did. Which, in turn, jogged my memory enough to compose this follow-up. I'll give you the first photo again here to save you having to go back to look at it: 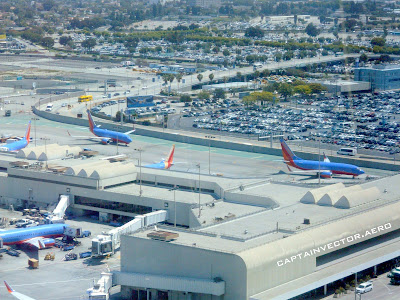 What's happening here is that the Southwest on the left is entering the alley, while the one on the right is pushing off of gate one. That's obvious enough. What made it noteworthy though, is that the inbound aircraft is headed not for gate seven, the open gate off its right, but instead for gate three, which is now blocked by the pushing aircraft. As I recall, this was an error by the ground crew at gate one, who were supposed to wait for the airplane coming into gate three before starting their pushback. In the end, they pulled their plane back onto gate one so that the arrival could make it into gate three.

A few comments noted the tri-color tail on the aircraft parked at gate five. That's actually this airplane:

The second photo shows a DHL DC-8 just lifting off runway 25 right. We don't get DC-8s on a regular basis any more, but that airplane wasn't the anomaly in this shot - it was the Delta B757 on taxiway A in the background. There were some speculations that this was caused by the recent runway and taxiway closures, but in fact this Delta flight was a charter and was headed over to the Atlantic Aviation ramp. Here's another shot, showing another Delta aircraft on the Atlantic ramp: 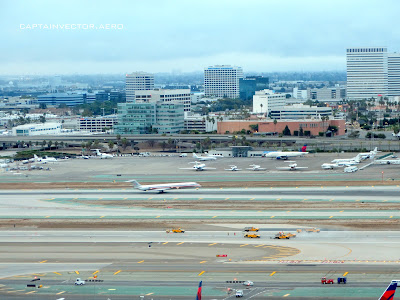 Posted by CaptainVector at 12:22 AM No comments:

I just realized that it's been ten days since I've posted; apparently I don't have much worth sharing right now. However, I do have a collection of post drafts that I've started but not published, and so I'm pulling a couple of photos from there and putting them together here, as they originally were intended to be items in the What's wrong with this picture? series. The irony is that I'm not sure I remember now what it was that made these two shots candidates for the series in the first place, so good luck!

It's time once again for everyone's favorite feature: What's wrong with this picture? 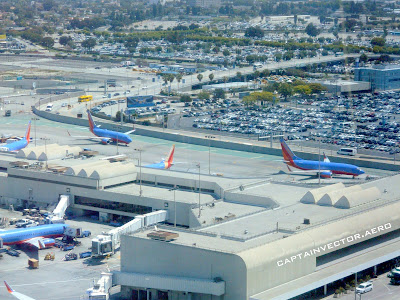 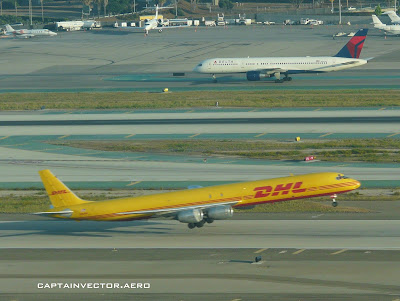 This mini-series was so popular before, that I now try to keep my eyes open for new opportunities. Some, like this one, may not be as obvious as the earlier ones. So, what's wrong with this picture?
Posted by CaptainVector at 8:10 PM 12 comments:

One final set of shuttle shots 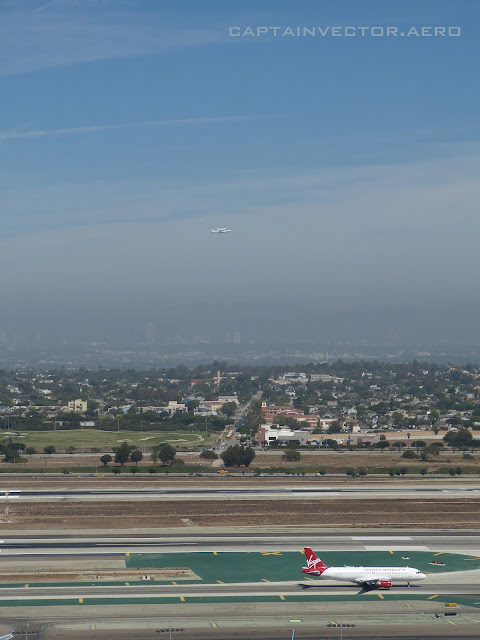 Okay, okay -- I know this is becoming a dead horse, but when you've taken nearly 600 photos, there are bound to be more than a few worth sharing. This will be the last set, I promise; thanks for your forbearance. 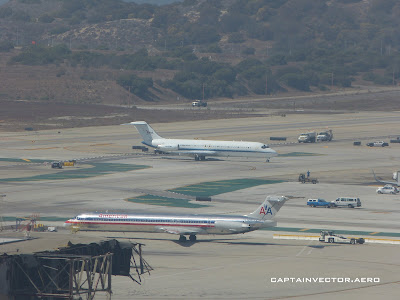 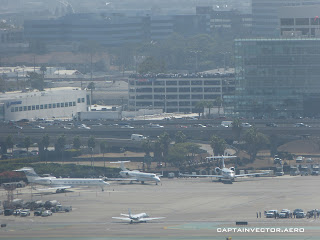 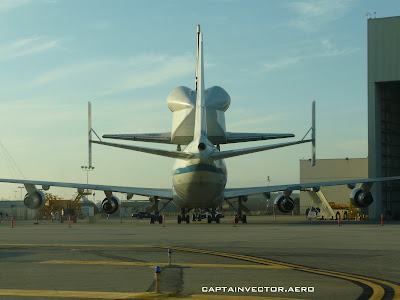 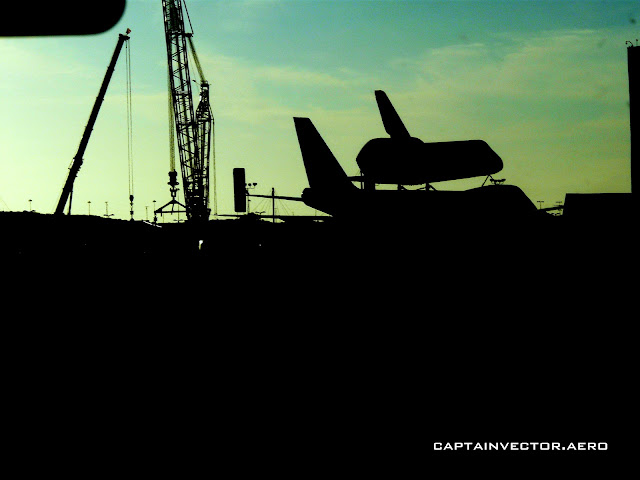 Links to the previous shuttle photo entries:  The Endeavour has landed
More shuttle shots
Posted by CaptainVector at 9:55 PM 4 comments: 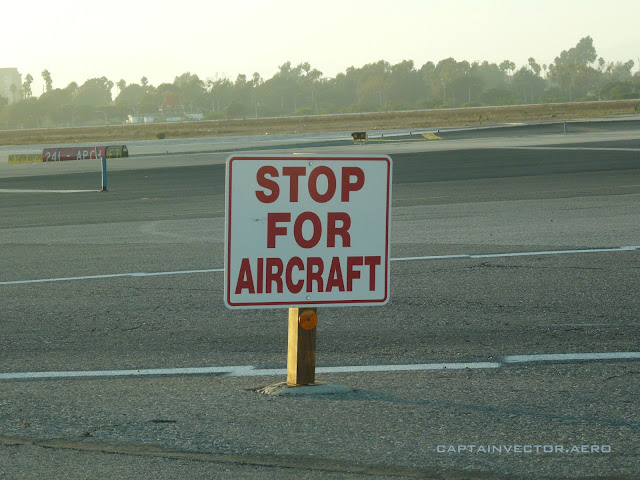 I got the opportunity to take a ride with one of the airport ops guys recently, so today I'll take you down to ground level. We'll start in the middle of the airport, just west of the TBIT, on Taxiway Sierra, shown in red on the airport diagram: 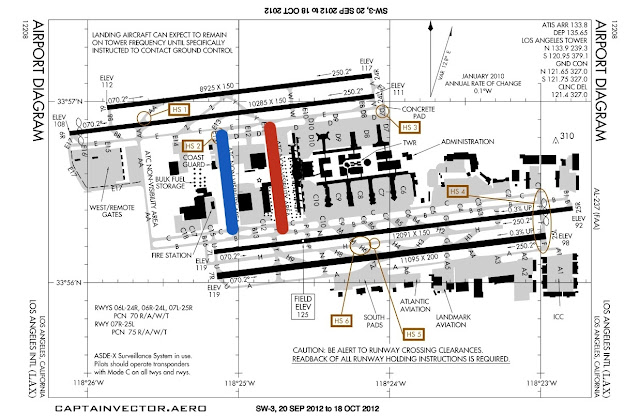 As I've mentioned before, Taxiway Sierra is closed. And here's why:


Some more views of Sierra: 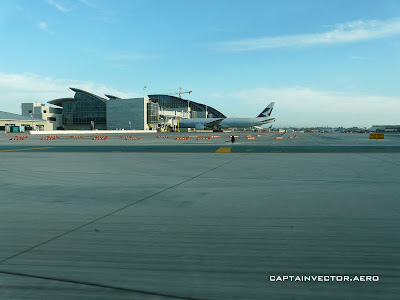 Seen in a couple of the earlier photos are these ultra low profile barriers: 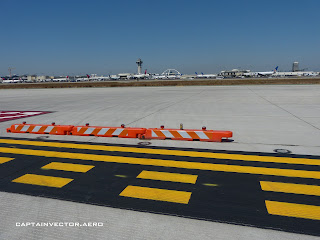 Mentioned in comments posted to a September entry, these are one of the ways the airport uses to block off closed taxiways. In an (apparently now deleted) post on another blog, a B757 captain told the story of how these are very difficult to see until you're nearly on top of them. That's understandable, considering that they're only 10" high.

Posted by CaptainVector at 12:46 PM 2 comments: