Not another "What's wrong with this picture?" 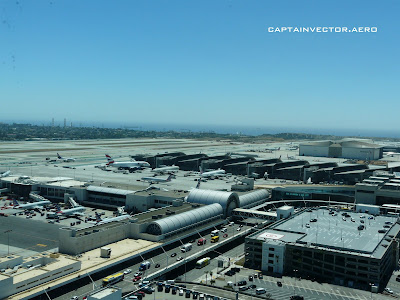 I was going to use this for another "What's wrong with this picture?" post, but apparently it was a slow news day and so the incident received national media coverage. This is how it appeared from the tower. 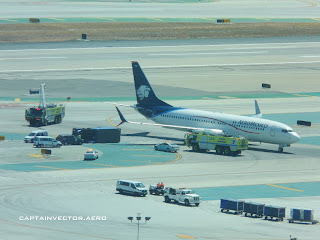 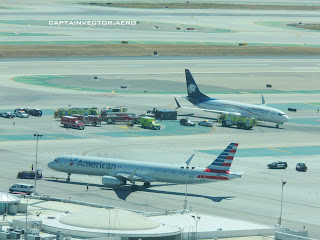 
Posted by CaptainVector at 5:52 PM 2 comments: 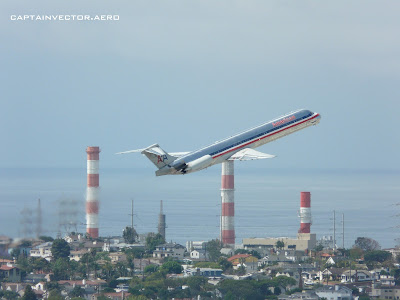 Dear reader: You did not know it, but you've been waiting nearly a year to read this entry. I started work on it last summer (2016) when it occurred to me that we weren't seeing as many MD-80s at LAX as we had been in years past. American had announced that they would be gradually withdrawing the MD-80 from their fleet, but it was a news item that the airline was going to retire twenty of them in one day that really drove the point home. That was the genesis, but thanks to my ability to be easily distracted ("Oh look - a heffalump!") the gestation took quite a while longer. So here it is, updated for the date I hit the "Publish" button. Thanks for waiting.  CV


For several decades now, the MD-80 has been a workhorse in the fleets of airlines around the world. Over 1,100 of them were built in five variants, most in McDonnell Douglas's Long Beach factory. The MD-80 was developed from the DC-9, which first flew in 1965. Nearly 1,000 DC-9s were built before production shifted to the MD-80. The DC-9 has virtually disappeared from the fleets; Delta was the last major airline to operate DC-9s, which it had inherited from Northwest. Delta's last DC-9 flight was in January, 2014. The last DC-9 that I recall seeing at LAX was at least a year ago in the form of a USA Jet DC-9 cargo flight.

Over the last year or two, the MD-80 has been disappearing from the fleets of major carriers. At LAX, the biggest operator of MD-80s in recent years has been American. As I write this, American still flies MD-80s. but they are being retired rapidly; twenty were retired in just one day last year. At this point, they're down to fewer than a hundred left, and American expects to park its last MD-80 sometime next year. We hardly ever see American MD-80s at LAX anymore; the last one I personally saw is shown in the opening photo, which was taken in last summer. 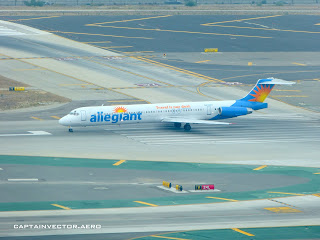 Unlike the Boeing 727, which had an extended life in the cargo world, the MD-80 is not likely to be as prolific flying freight. The primary reason is that the standard narrow-body cargo containers do not fit in the MD-80's fuselage, which (like the DC-8 and DC-9 before it) featured five-across seating compared to the Boeing's six-across. Thanks to the DC-9 series, there are special cargo containers designed for the smaller fuselage, and these will also fit in the MD-80. Truthfully, there don't seem to be many DC-9s flying freight anymore either. Granted, at LAX we're possibly not as likely to see them as most freight demand here requires larger aircraft.

In fact, most B727s are also history in the cargo fleet, as they've been replaced by the B757s and B737-400s that airlines are phasing out in favor of newer models of the A320/A321 and B737-800/-900. The B727, B737 and B757 have essentially the same cabin cross-section, and so the standard containers work equally well in all of them. Not so the MD-80; cargo conversions of the Mad Dog are not nearly as common as they have been for the Boeings. That said, there is a company that offers a cargo conversion for the MD-80 series. I did read that they've had disappointing sales because the acquisition price of used B737-400s has come down quicker than expected. According to one article I read, they were also considering creating a cargo conversion for the MD-90, which is the ultimate version of the DC-9/MD-80 family, but dropped it because there are fewer than 100 MD-90s in the world, and most of them are in Delta's fleet -- and Delta has not indicated any intention to get rid of them any time soon.

Speaking of Delta, at this point they are the dominant operator of MD-80 and related aircraft in the world. While we don't see them at LAX anymore, Delta has the largest remaining fleet of MD80s and MD90s. But thanks to Delta, the MD-80 heritage is alive and well at LAX, in the form of their Boeing 717s. The 717 started life as the MD-95, intended to replace the smaller DC-9s, and became the 717 after Boeing took over McDonnell Douglas in 1997. Delta is also the world's largest B717 operator, as it acquired all of the AirTran B717s after Southwest took over that airline in 2012. At LAX, we see Delta B717s daily on flights up and down the west coast. 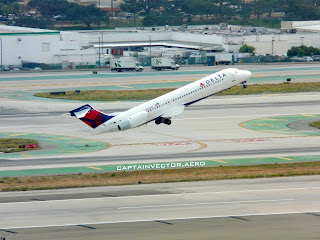 Posted by CaptainVector at 8:39 PM 2 comments: