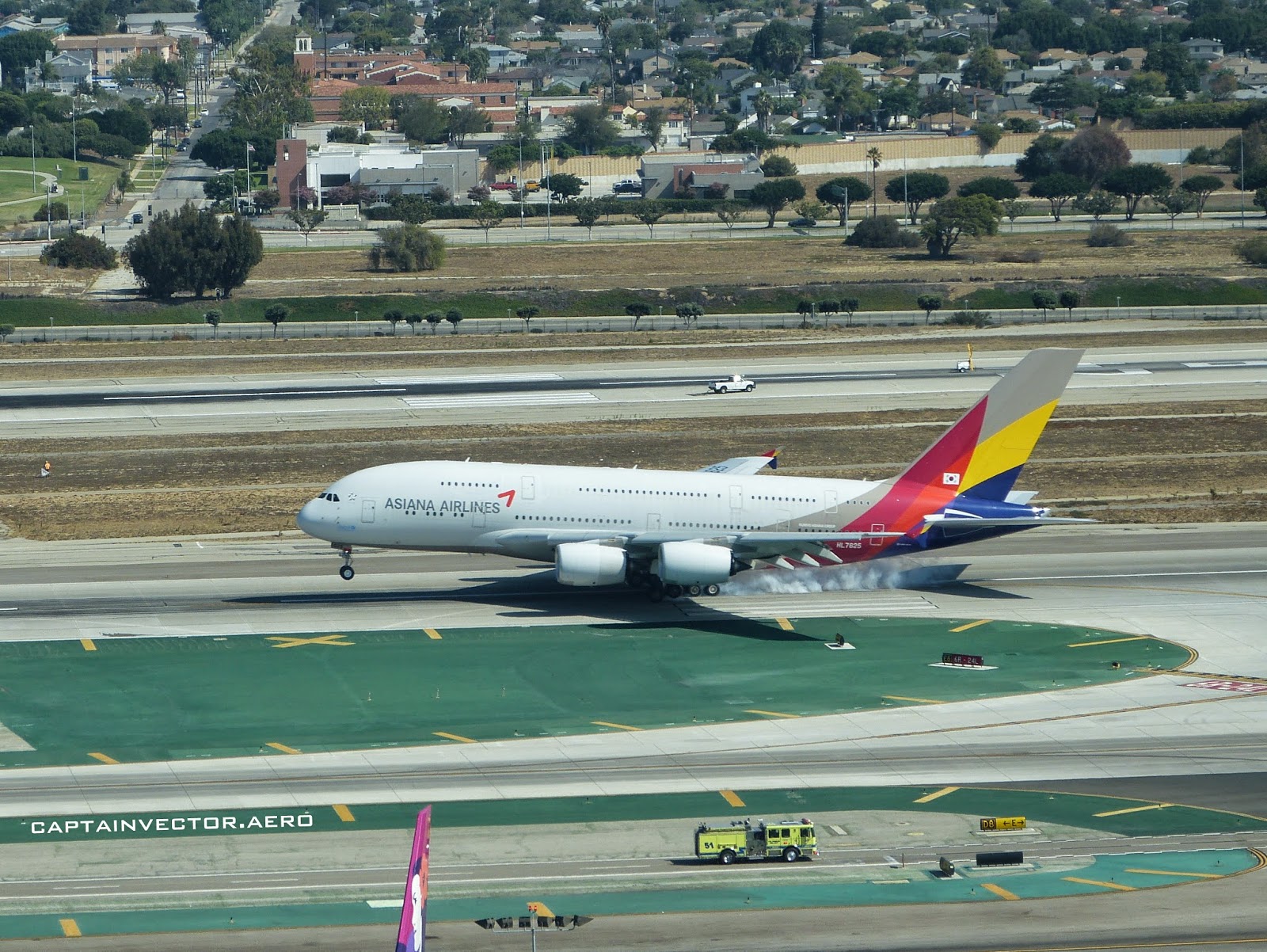 I lucked into a nice shot of Asiana landing on Runway 24 Left this weekend. Since I knew it would be featured here, I took a look through the cameras to see what else I had in the same vein. The opening shots are mine; the remaining four I believe are credited to CG (again). 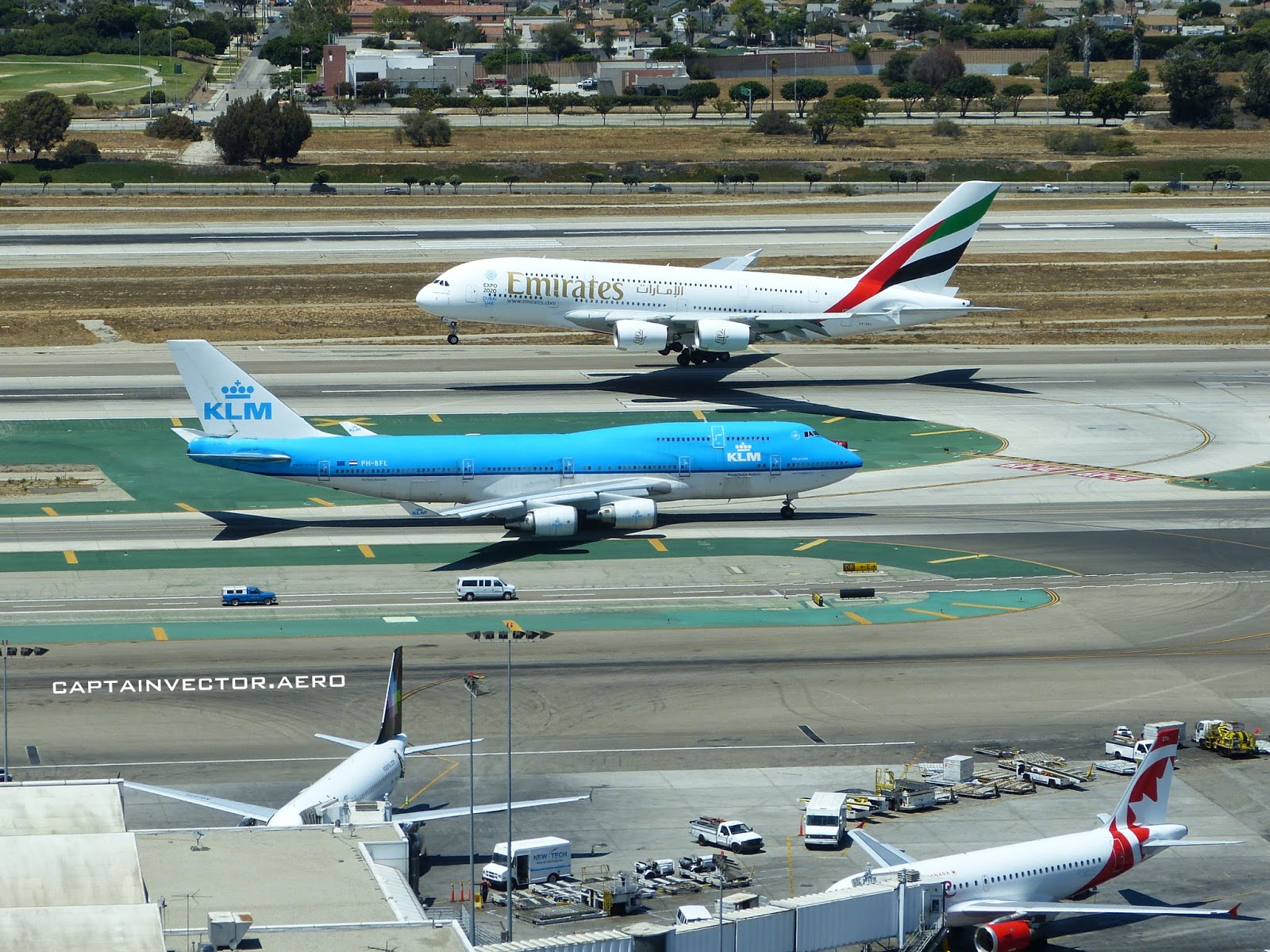 Emirates arriving on Runway 24 Left, with a KLM B747-400 on Taxiway Echo. This summer, we've been getting two KLM flights per day, both in B744s. Some of you may recall that the last two summers, the additional seasonal flight was often operated with MD11s, but not this year. 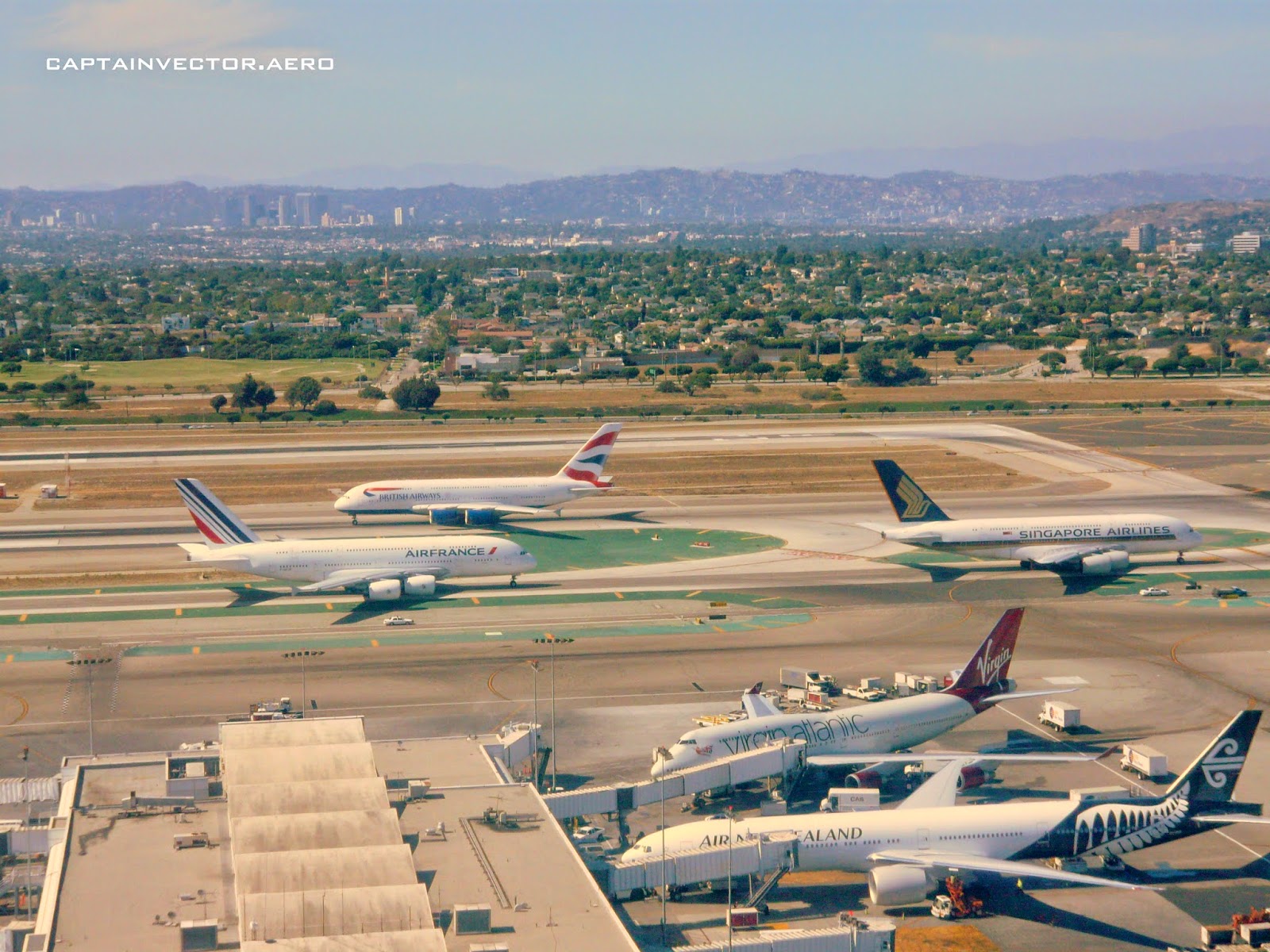 Three of a kind! To produce this shot, the ground and tower controllers had to work together, since we have some draconian restrictions on A380s on the runway and the adjacent taxiway at the same time. The British Airways jet would have had to wait in position on the runway until the Air France jet could approach the position seen here. Not seen in this shot are the dozen other aircraft that are normally departing about this same time; the A380s most likely were held back until everyone else was out of their way.

While I was gone on MINI Takes The States, Los Angeles got rain. In late July, which is virtually unheard of. Nonetheless, here is a sequence of shots showing Korean departing Runway 24 Left. Check out the spray! 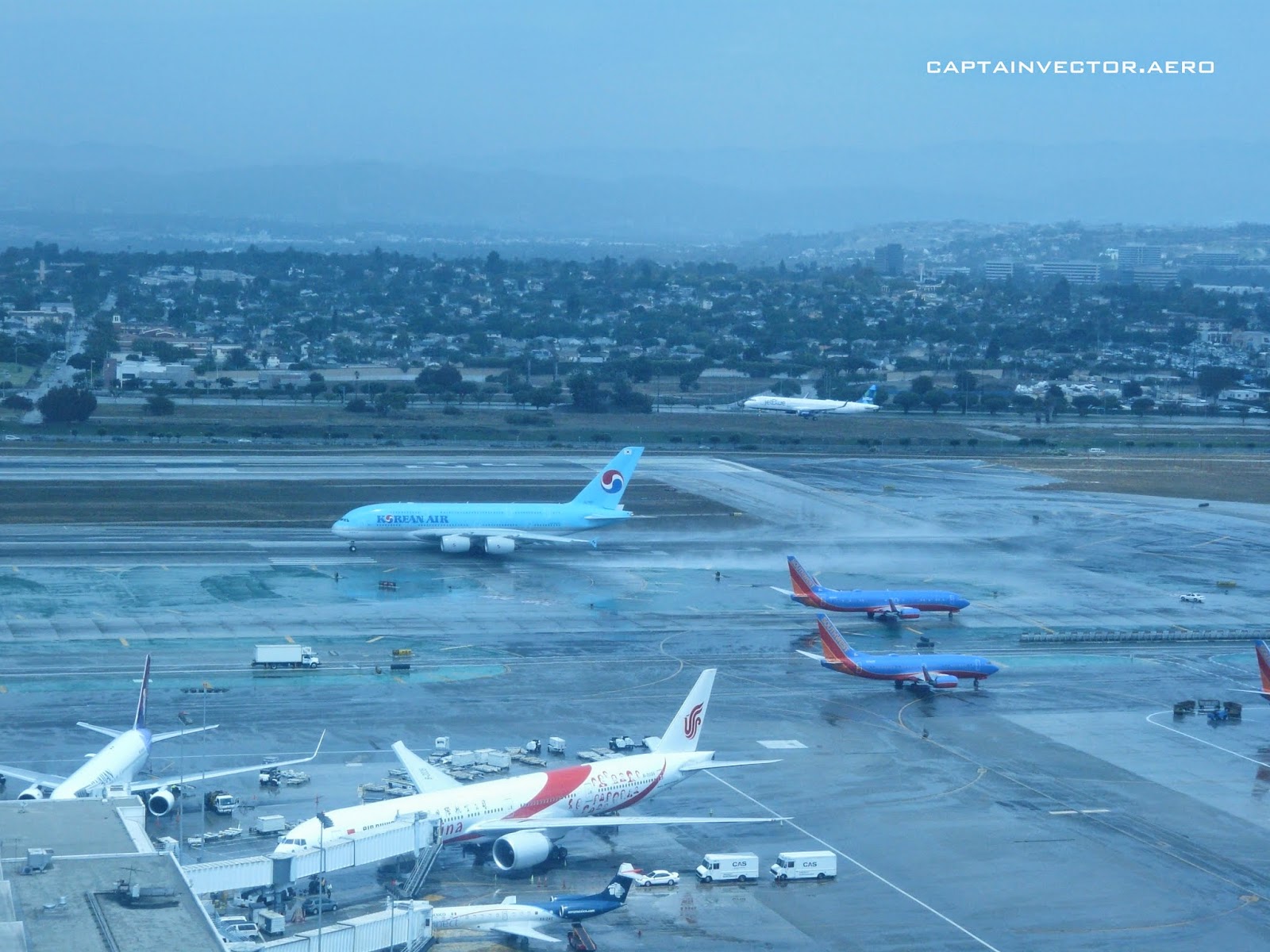 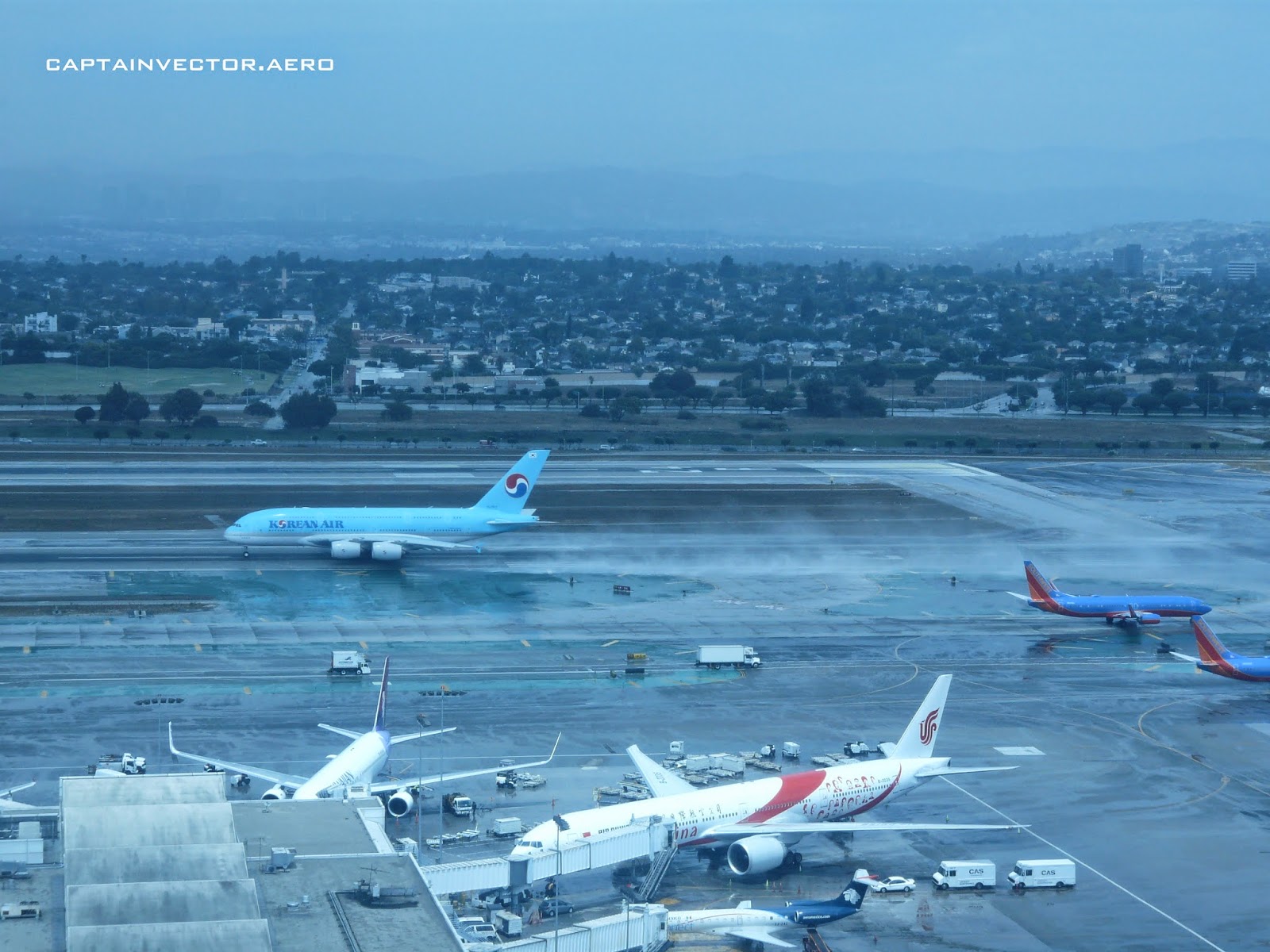 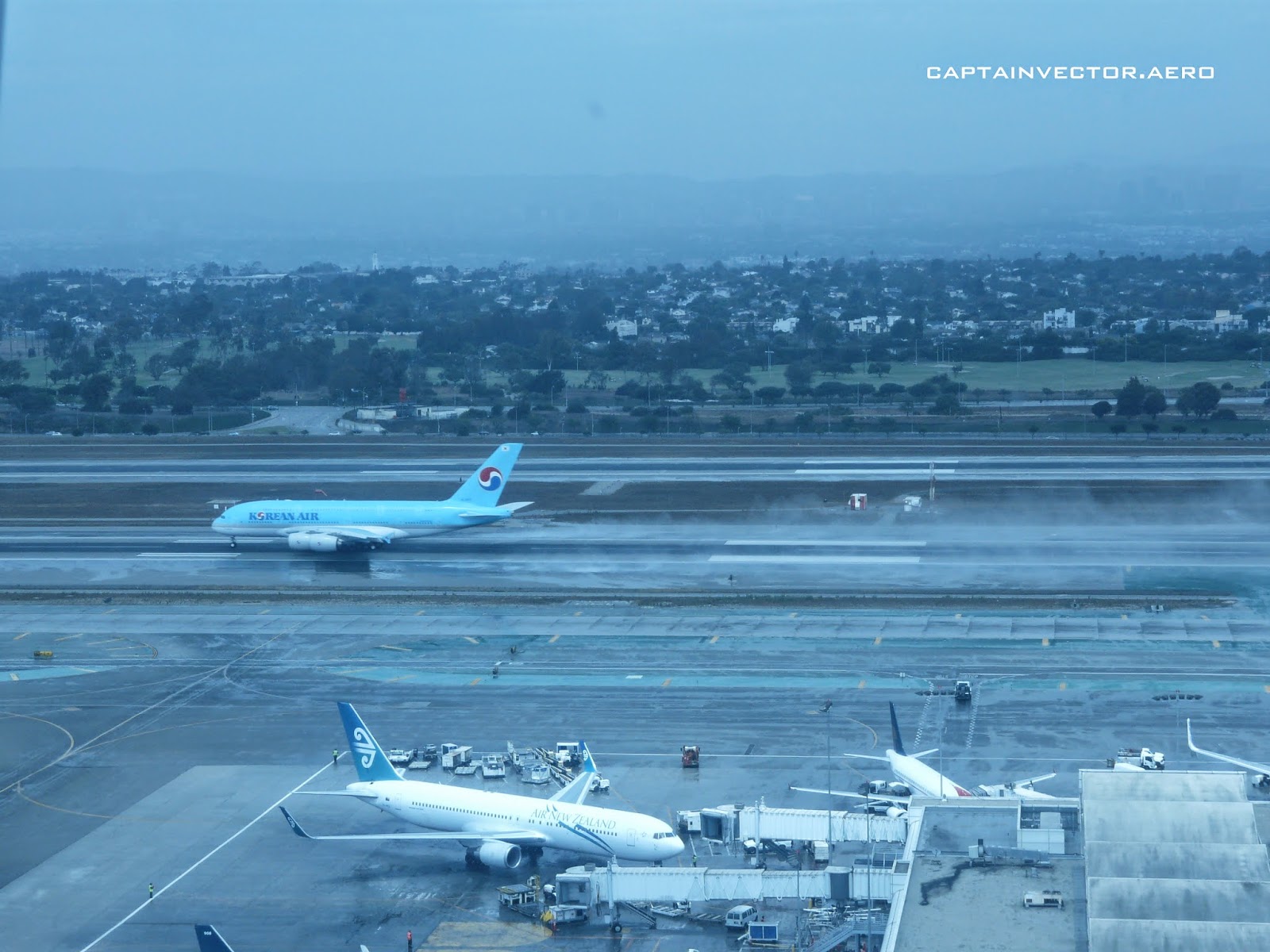 This post features most of LAX's A380 operators; the only ones not shown are Qantas and China Southern. As of this writing, LAX gets eleven or twelve A380s a day. I hear that there are more that would like to come, gate space permitting. Here's the current breakdown of operators, and how many A380s they bring to LAX daily:

For those of you who want to see them in person, your best time is between about ten in the morning through around four in the afternoon. That will let you see most of them except for China Southern, who usually arrives closer to six in the afternoon. As many have lamented, most A380 operations occur on the north side of the airport. Don't despair, though: Sometime next year, that will change, albeit possibly only temporarily, when a runway construction project will push them all to the south side. More details will be forthcoming if/when I get them.
Posted by CaptainVector at 11:38 PM 2 comments: 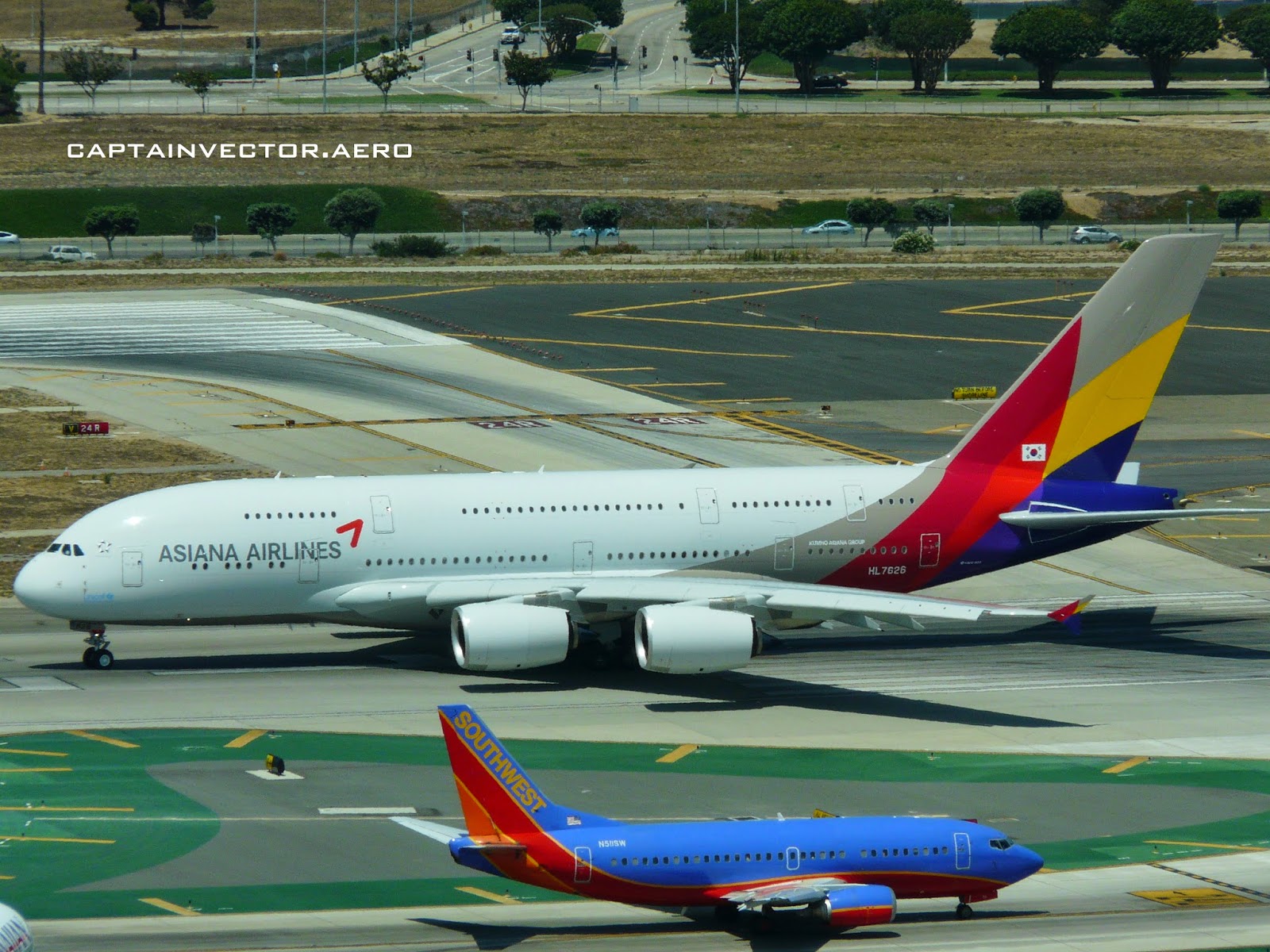 Thank you for your patience while I was traversing the country on MINI Takes The States with Ryan's MINI. While I was away, CG grabbed a couple of super shots for you.

Asiana started their A380 service between Los Angeles and Seoul, South Korea this week, giving all you A380 spotters one more reason to come to LAX. The flight was previously operated with a B777-200, and arrives late morning and departs in the early afternoon.

Speaking of spotting, here's another A380 that I've seen a couple of times, but have been unable to catch with the camera. CG to the rescue again: 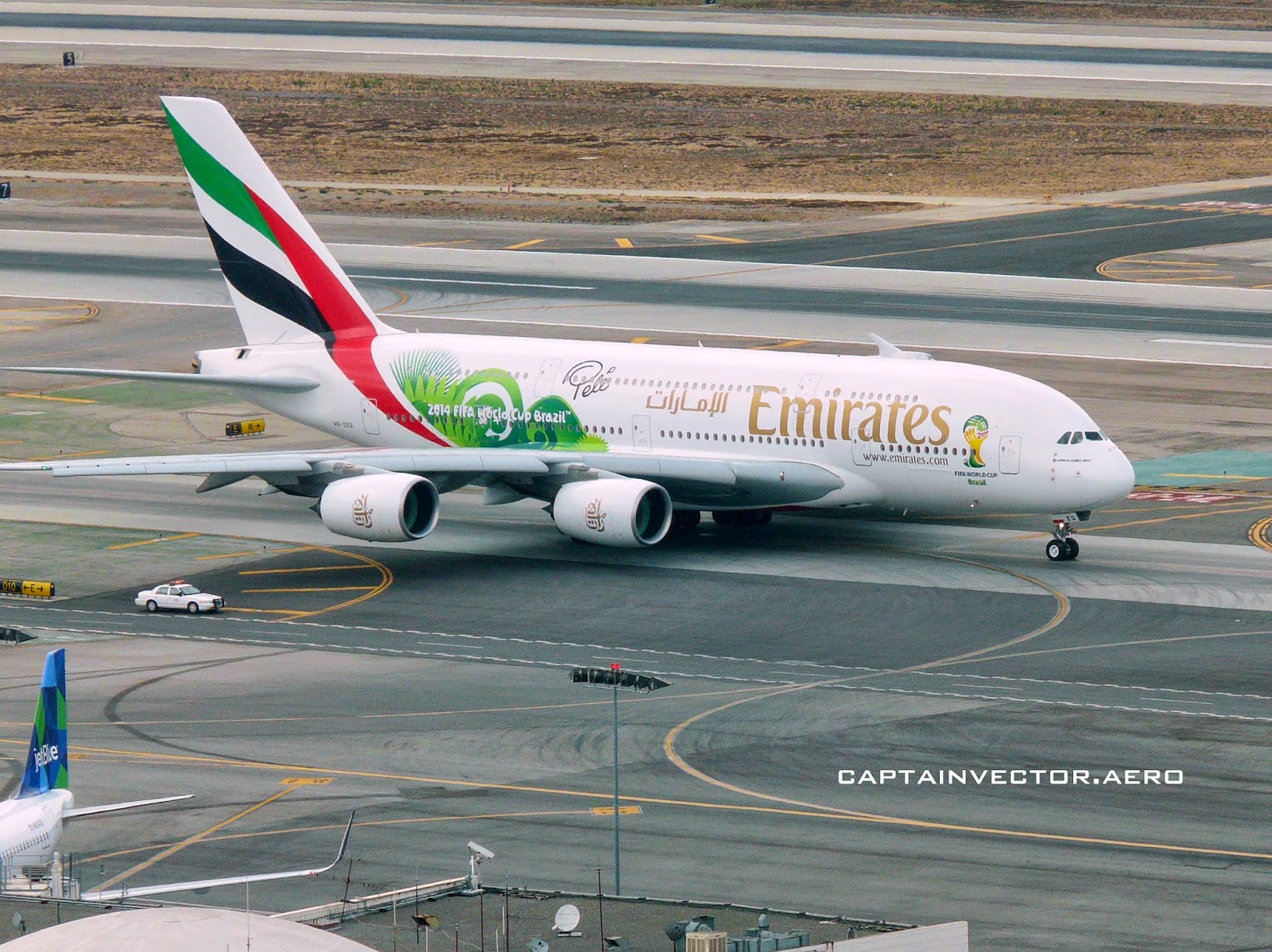 Posted by CaptainVector at 12:47 AM No comments:

Email ThisBlogThis!Share to TwitterShare to FacebookShare to Pinterest
Labels: A380, AAR, UAE

A quick note today, inspired by some recent comments about Airbuses and Boeings at LAX. While it seems like we're getting more A330s lately, there are five carriers at present bringing A330s into LAX on a regular basis:
The newest of these is China Eastern, who just started bringing A330s to LAX earlier this summer. Hawaiian is by far the most prolific A330 operator at LAX. The others each have one or two flights per day apiece. We also have several more occasional A330 operators at LAX:
The above are all passenger airlines; we do not currently have any cargo operators using A330s at LAX. Nearly all A330 operations at LAX are in the -200 model; we don't have any regular flights utilizing the longer -300. However, Air Canada, Aeroflot, and Delta have been known to bring them in from time to time.

Meanwhile, the list of B777-200 operators at LAX is twice as long:
If we include operators of the longer -300 model, we get an even longer list:
About -ER and -LR models: to ATC at LAX they are essentially the same as their parent model, because for simplicity's sake we treat all B777s as if they are the -ER/-LR version. Most of the B777s we get at LAX are in fact -ER or -LR versions of their respective models; we don't gain any operational advantage from the occasional short wing variants that may pass through. In addition to the passenger carriers already listed, we do have several cargo operators using B777s at LAX:

Posted by CaptainVector at 9:19 PM 2 comments: