When I fly, it seems like just about every airport I pass through has construction going on. Some major airports seem to always be under construction (just like the Houston freeways). And it's quite often true: As soon as one project wraps up, the next one starts. Here at LAX, I think we've had some sort of construction going for the last several years. Sometimes it's a major project, such as the relocation of runway 25L/7R that took place during 2006-2007, or the addition of a center taxiway between the 25's that followed. In earlier entries I've shown some of that project. Other times, it's just repair or replacement of failing concrete. We've had a lot of that lately, too. Consider that a loaded B744 weighs over 900,000 pounds, while the A380 can top out at well over a million pounds!

Our last major project took place last fall, after the end of the summer travel season. That traditionally is Labor Day weekend, and for 2008 the decline was dramatic. I've mentioned that before, so won't belabor the point again (15%!). However, the drop in traffic also gives the airport some breathing room when it comes to closures for construction. The Fall 2008 project was the replacement of concrete along taxiway Echo, including the runway 24L entry at Victor, and the relocation of E-8. I don't remember now exactly how long this took, but they started after Labor Day and the whole thing was done before Christmas.

The rework of Echo was sorely needed, as the expansion joints between the slabs were failing. We could watch aircraft as they came down the taxiway: Every expansion joint created a wing flapping motion. I can recall riding in a Southwest B733 one day, and it felt like the plane had square wheels.

Although the runway itself was not being worked on, the project restricted the access to Runway 24L. Because the construction was right up to the edge of the runway, we were not allowed to use the portion of the runway adjacent to the construction zone. While it was still available for departures via the E-10 intersection, it was not available for arrivals at all. We could taxi an aircraft down the unavailable section to get into position at E-10 for departure, but only one at a time. Since Ground Control had lost the use of Echo east of E-9, this was sometimes the easiest way to get a departure going. Of course, to get onto the runway at the east end required using the E-7 bypass around the end of the runway and then joining the runway from the north side; the Southwest jets in pictures 1 and 4 show this operation. We could also use that route to get to runway 24R for departures, which is actually what the far Southwest jet in picture #1 is doing. This didn't work so well at night because E-7 isn't as well lit as most of the other taxiways, having centerline lights only with no edge lights, making pilots somewhat reluctant to use it. The use of E-10 for intersection departures also meant that the available runway length was about 2000 feet less than normal, so most of the long-haul heavies had to taxi around to the south side for departure. We did see a few dramatic heavy departures from Aer Lingus and Virgin, and maybe one Qantas going to JFK that I can recall. 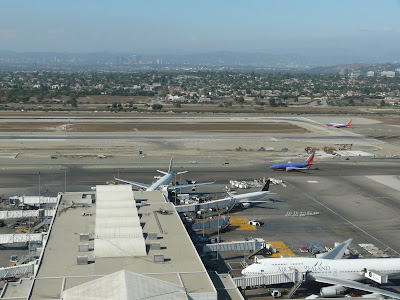 Here's the taxiway, just started. Taxiway Victor, which serves as the entrance to Runway 24L, is on the right edge of the picture, while Taxiway E-8, the first intersection, is just about in the center of the shot, behind the tail of the Air France A343 at Gate 27. The project started with the removal of the old concrete on Echo and Victor, which is just about done in this picture. 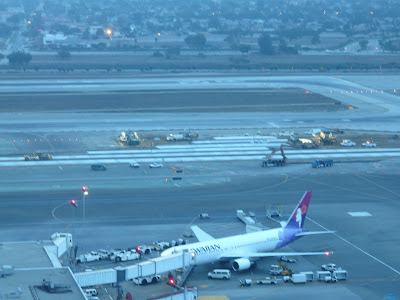 This shot, taken through the tower window shades, shows the mid-point of the project; not all of the concrete happened at once. 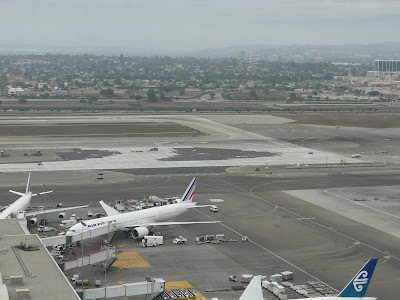 Here, you can see it's nearly complete. The new E-8 is much closer to the threshhold of the runway, compared to the original location. You can see both in this shot: The old E-8 is at the left edge of the shot with some equipement parked on it, once again right behind an Air France A343 at Gate 27; the new E-8 is the white concrete in the middle of the shot, above the tail of the Air France B773 at Gate 25. 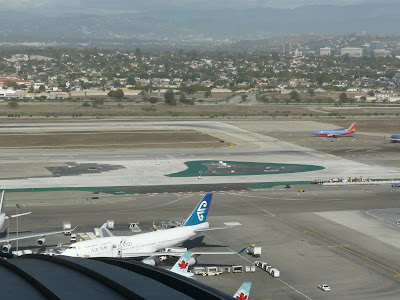 Another shot of the nearly-done project. Besides the centerline and edge markings, the shoulders are painted green to better define what concrete is taxiway versus what is paved or stabilized clear areas. 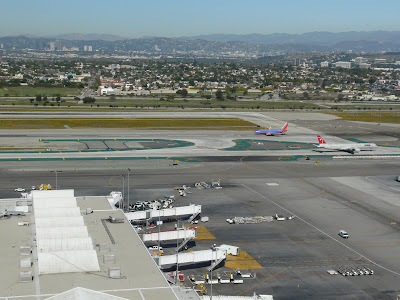 And here's the end result. You can see both the new and old E-8's; the old one was left in place because it costs a lot of money to remove old concrete, and then the ground would have to be stabilized again. You can see that the new green paint does run across the old intersection, to help clarify that it's not there anymore. Sometimes the painted-out centerlines show up just as well (or better, even - an annoying problem on the LA freeways) than the 'real' ones. The best part about the new E-8 is that it's now close enough to the end of the runway that we don't have to apply all the intersection departure wake turbulence rules if we want to depart an aircraft from E-8 after one has departed from the full length of the runway. Before, an aircraft using the intersection had to have a three-minute delay behind a heavy jet that had departed from the full length; the new position allows us to use the miles-in-trail rule instead, which is usually less restrictive. 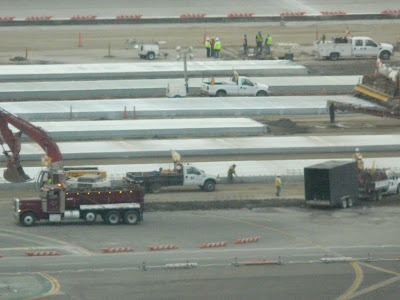 Check out how thick that concrete is! 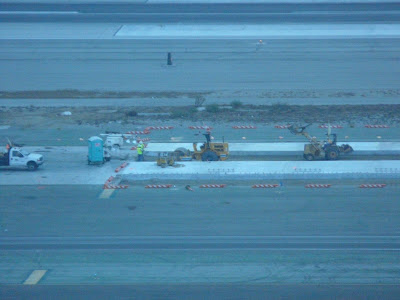 For comparison, here's the concrete under a local Interstate: 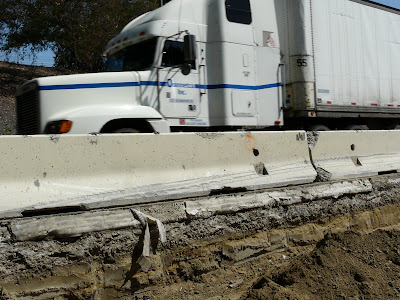 And under a city street: 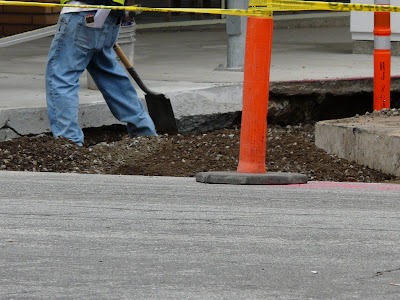 Posted by CaptainVector at 9:15 PM 3 comments:

While I was out and about, ostensibly running errands, but mostly just avoiding my chores, I happened into our local farmers market this afternoon, and found a couple of interesting citrus: 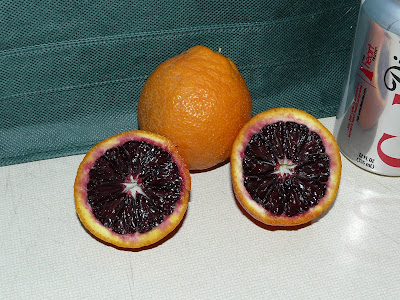 Blood Oranges. While I'm no doctor, I'm thinking that if your blood is that color, you're in trouble. Look neat, but not terribly tasty, juicy, nor sweet. I gave my mom a blood orange tree for her birthday recently - Sorry mom! Maybe Pshammy will like them . . . 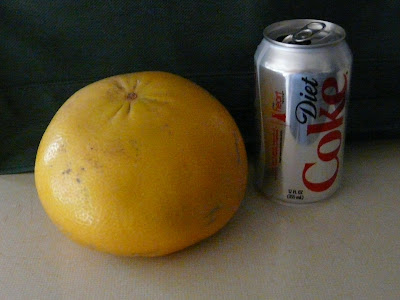 This is a Pomelo - kind of an over-grown grapefruit. This one is actually small; most of the ones I saw were a good bit larger, and a few were nearly twice this size. I'd never heard of these until a few months ago, when I found some dried pomelo at Trader Joe's. I like the taste, but the first whiff you get when you open the package is repugnant - it smells like skunk. I haven't tried it fresh yet, but it smells fine sitting on the kitchen counter.

Meanwhile, from the department of the ridiculously silly, comes this news item from Scotland:

Force is strong for Jedi police

I wish I'd thought of that!

I've a friend who wants to take advantage of the low airfares to go to Australia. Now I think I know why the fares are so low:

In other animal news, cloning sheep is so yesteryear:

And I'll leave you with this:

Spring is sprung, and I seem to have a case of spring fever: I'll admit that I haven't been feeling terribly inspired lately, so today I'll give you a few recent snapshots that seem noteworthy for some reason or other. 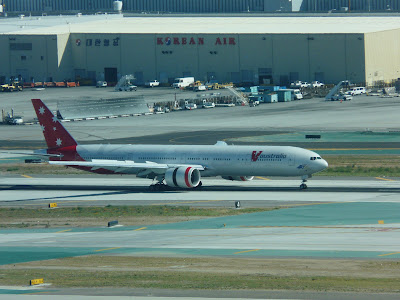 I mentioned a while back that we were getting a new airline at LAX: V Australia, the newest addition to the Virgin family. I have yet to get any really good shots of them, but here's a passable one of an arrival from Sidney last week. So far, the arriving flight has parked at the International Terminal, and then repostitioned to Terminal Three for the departure, as seen here: 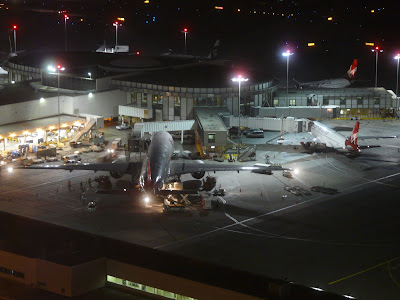 The amazing part is how they manage to shoehorn that B777-300 into Gate 38, which as you can see is at the bottom of the D-9 alley. So far, they're only offering service between LA and Sidney, but Melbourne and Brisbane will be added later in the year. Their arrival has sparked some fare competition with Qantas: Round-trip fares to Sidney are as low as $600! 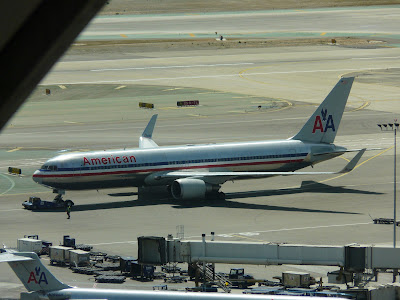 Here's something new: a B767 with winglets. Adding winglets to B757's and older B737's has been very popular, and now the treatment has been extended to the heavy jets as well, having just been approved last month. This is the first one I've seen at LAX, and may in fact be the first B767 so equipped, as the test aircraft was an American B767-300. American expects to save about 290,000 gallons of fuel per year, per aircraft so equipped, and they've got over 50 B767's. Reportedly Hawaiian is also going to be retrofitting some of their aircraft. On the B767, they're about eleven feet tall! 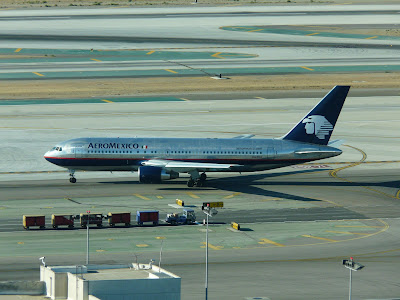 Here's another unusual B767, this time a -200 in AeroMexico colors.
Unusual in that we normally see AeroMexico in B737's, or occasionally MD87's. 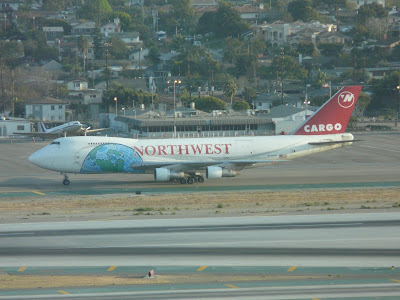 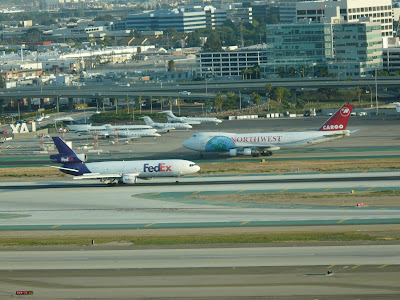 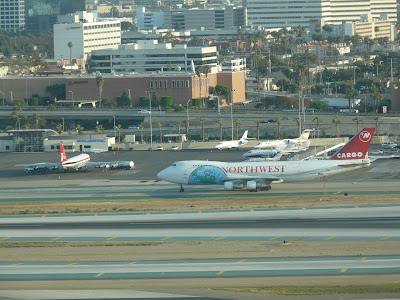 The Northwest freighter fleet has so far shown no signs of the Delta transition. While most of them are unremarkable, I think this one looks neat. That's a B707 just in front of the nose in the last shot; with a DC10 and a B727, along with various Gulfstream biz-jets in the previous one. 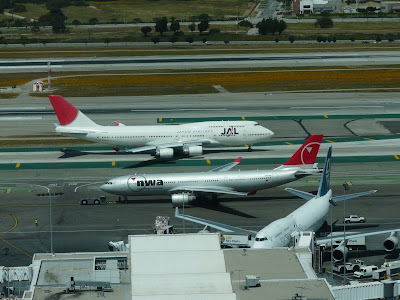 On the subject of Northwest, here's yet another shot of one of their A330's, this time one of the shorter -200 models. I know I've shown you these a lot recently, but this one is noteworthy because it's Northwest Flight One, preparing to leave for Tokyo (as is the Japan Air B744 behind it). This flight has, until last week, been solely the province of Boeings. Northwest used B747-200's until just a couple of years ago, when they went to -400's. Not just Northwest though: All the flights we have to Tokyo, regardless of carrier, were in various Boeings until this happened. 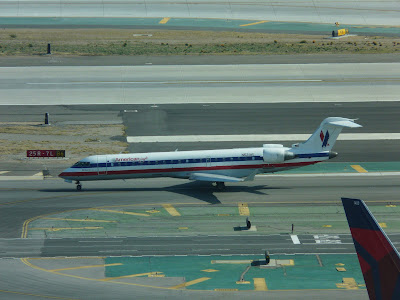 Yeah, yeah: Another RJ; big deal. Actually, it sort of is, because this is a CRJ7 flying for American Eagle. Who uses E135's out of their LAX hub. We only get this plane once a day, on a round trip to and from Northwest Arkansas Regional Aiport, which is esentially Fayetteville, Arkansas. This is the only flight from LA to the entire state of Arkansas. You can't go from here to the state capital (Little Rock), but you can go from here to the home of Wal-Mart.

And finally, what's wrong with these pictures? 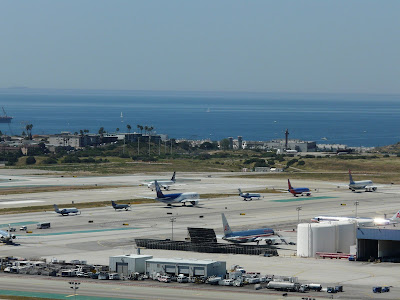 If you said that the airplanes are all at the wrong end of the airport, go to the head of the class! For a couple of hours last Sunday, the winds picked up to the point that we had to go East. Normally that doesn't happen this time of year, nor is the weather suitable for photography!
Posted by CaptainVector at 6:26 PM 3 comments: