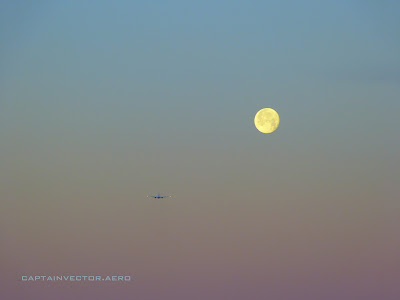 Okay, I know it's getting old, so this will be the last of these for a while. They were taken a day after the full moon - you can just see it starting to wane. The opening shot was taken just before sunrise; the lower shot some time after. 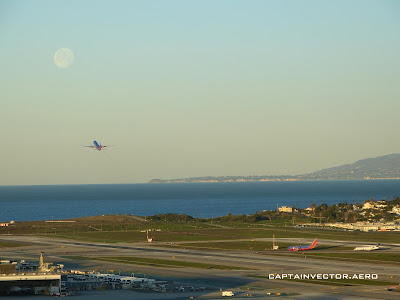 No moon in this one, but it appeals to me: 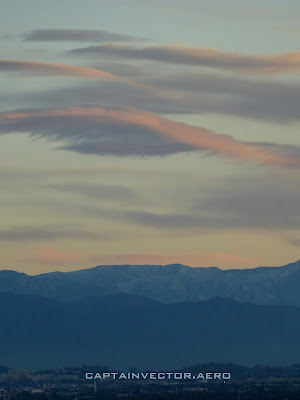 Posted by CaptainVector at 7:37 PM 3 comments:

Sunrise shots of the day 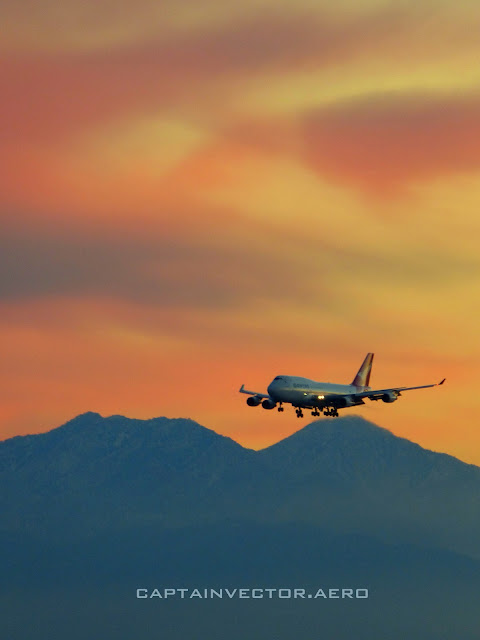 There seems to be a theme this month: Most of the photos feature B747s, and this one follows the trend. I don't seem to get nearly as many good sunrise shots, but this is one. Here's another, taken a short time earlier; you can see the following aircraft on the base leg: 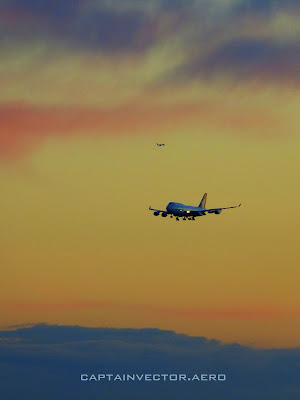 Posted by CaptainVector at 7:47 PM 3 comments:

Cool shot of the day 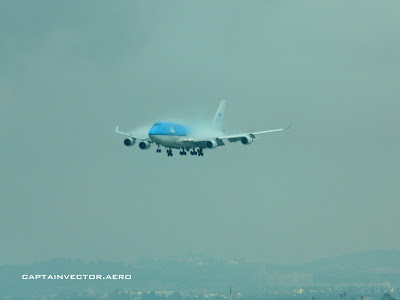 One of the nice things about the wet weather we had last week was that it provided the opportunity for a few shots like this.
Posted by CaptainVector at 6:20 PM 2 comments:

What was that plane? 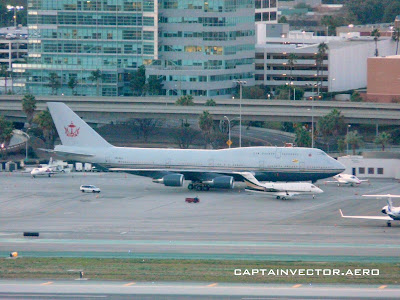 Most of the comments for my last post expressed more interest in the background of one of the photos than in the topic being discussed. Namely, this visiting B747, seen here in an early-morning shot while parked on the Atlantic Aviation ramp. At the time, I didn't know whose it was, but I remember at one point we discussed it in the cab - to the point that we looked up the nationality of the registration, which was Brunei Darussalam. Being no better at world geography than most of our countrymen, we decided that this was probably from one of the UAE states. (A bit of explanation is in order here: In the tower cab, cell phones are not allowed, and the various computers do not allow access to the internet, so on-the-spot Googling*, an ability most people take for granted nowadays, was not an option)

Now, taking a look at this shot, the registration (V8-ALI) is clear enough to feed into the Google, which reveals that this aircraft flies for the Sultan of Brunei. Brunei, by the way, is NOT one of the United Arab Emirates states. It is actually on the island of Borneo (in southeast Asia), which it shares with Malaysia and Indonesia.

* - In an curious coincidence, "verbing" words was the topic of the Calvin & Hobbes strip in my e-mail this morning. I would share it with you here if I wasn't afraid of lawyers and copyright laws. Instead, I offer you this link to it: Calvin & Hobbes

Also, this talk of Google reminded me of my first encounter with the term googol, from which the Google name was derived:

Posted by CaptainVector at 9:22 PM 6 comments:

And now, for something completely different . . . 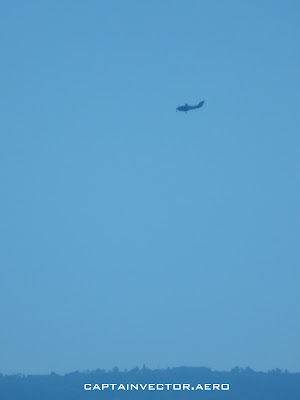 Last weekend, I got to do something I haven't gotten to do in years: Work an airplane in the pattern.

Pattern work is a staple of most general aviation airports. It consists of taking off and flying a box pattern around to the other end of the runway and then landing. The landing roll may transition into a takeoff, commonly known in this country as a "touch-and-go". Those of you who speak the Queen's English may recognize "circuits and bumps". Also possible is a "stop and go", wherein the aircraft is brought to a halt on the runway, after which a takeoff is commenced from that position without taxiing back to the end of the runway. Another option is a low approach, in which the pilot overflies the runway without making a landing. Or of course, there's always the full-stop landing, which is what your airliner normally does. Sometimes, the controller will clear the pilot "for the option", which allows the pilot to do any of those things.

We don't do pattern work at LAX. There isn't the room; we have another airport on either side of us. Santa Monica airport lies about four miles northwest of LAX, while Hawthorne airport is just a couple of miles to the east. Both of those airports have patterns, and on nice weekends they can be full of airplanes going round and round. LAX, on the other hand, doesn't even allow pattern work. Practice approaches are strongly discouraged; any airplane that lands on one of our runways is expected to taxi off and park somewhere. We don't even allow taxi-backs (where an airplane lands, exits the runway, and taxis right back to the end for takeoff).

It's not hard to understand why: Little airplanes don't mix well with heavy jets. A B737 captain recently told me that his minimum approach speed was around 150 mph. That's as slow as his airplane can safely fly. Meanwhile, many small aircraft can't go that fast; on final approach they may slow down to half of the B737's speed.

"Runway 2 5 Left, Cleared for the Option"

So it was something special to get to work an aircraft in the pattern, something I did a lot at my first facility in Monroe, Louisiana - and hardly ever since. This special event was occasioned by the installation of a new PAPI (Precision Approach Path Indicator) on runway 25 Left. Before a new navigational aid can be put into service, it first has to be checked to ensure that it's accurate. The FAA has a fleet of aircraft that do just that: They fly around the country checking radio navaids and lighting systems to make sure that they're safe to fly. Each instrument approach procedure is test-flown before certification, and then periodically reflown. All routes are checked for obstacle clearance. The radio callsign for the aircraft performing these missions is Flight Check.

The Flight Check aircraft that visited LAX recently is a Beechcraft King Air. It flew several times around the pattern for runway 25 Left, making a low approach each time. We accommodated this operation on a Saturday afternoon, which is generally the slowest time of the week at LAX, as it is at most air carrier airports.  The opening shot (above) shows the aircraft on downwind, south of the airport at about 1,000 feet after its first low approach. The others all show it as it passed down the runway. 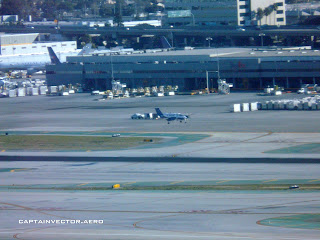 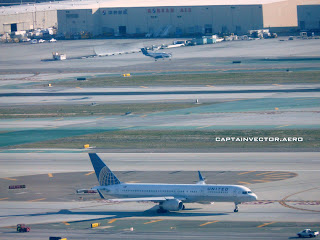 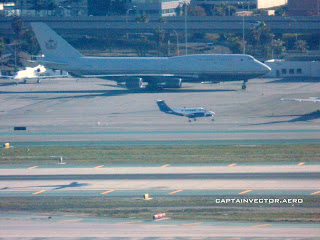 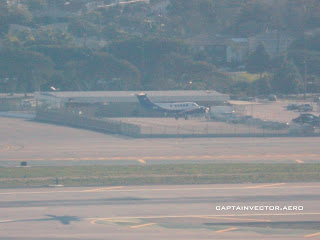 Posted by CaptainVector at 10:16 PM 4 comments:

What's wrong with those pictures?

Many of you left comments showing that you've been paying attention; well done!  For those who might have missed my previous discussion on the topic of similar-sounding callsigns, here's a quick synopsis:

Both of these pairs of strips have aircraft with similar callsigns and the same proposed departure time. I noticed these because I happened to work all four of these aircraft. As it so happened, each pair that I showed you arrived at the runway just in the order you saw them: EVA was right behind Delta, and (on a different day), Deltas 1554 and 1654 were one-behind-the-other on the taxiway. As you have a right to expect, your brilliant and dedicated LAX ATC handled the situation with grace, style, and aplomb.
Posted by CaptainVector at 8:04 PM 2 comments:

What's wrong with this picture - Yet again!

Posted by CaptainVector at 3:54 PM 11 comments:

What's wrong with this picture - Again

I've mentioned this sort of thing before here, so I won't belabor the intro and just cut straight to the photo: 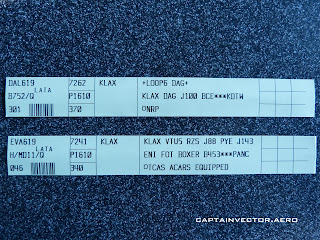 Posted by CaptainVector at 6:19 PM 8 comments:

It's a new year, and things have been a little slow in the aviation blog scene.  Captain Dave at Flight Level 390 has disappeared entirely*; Captain Cockrell at Decision Height and Captain Sam at Blogging at FL250 are both currently not flying for medical reasons; even Totally Jacked Up Aircraft Photos had a quiet spell around New Year's. Meanwhile, here in Southern California, we're experiencing a brutal cold snap that's had overnight temperatures down to nearly freezing.

Okay, that's enough: I can hear the laughter resounding around the world. That's my story and I'm sticking to it. Glad I could supply a moment of mirth; would that world peace were half so easy . . .

Now that we're past the holiday season, LAX traffic has quieted; at a rough guess we're running in the neighborhood of a couple hundred operations less daily. The next bump in traffic levels will happen in March for Spring Break. With the holiday peak behind us, the airport is resuming construction projects; we've already had some scattered taxiway closures, and more are scheduled - along with a runway closure. 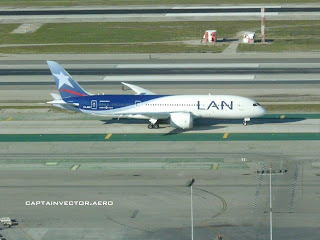 The Boeing B787 has been in the news again lately; I don't have anything to contribute on that subject other than LAX now has Dreamliners daily: Both United and LAN operate B787s through LAX. So far, United serves Houston, Texas, and Tokyo, Japan; LAN is to/from Santiago, Chile.

For a brief period, we're sometimes hosting seven A380s per day: Air France, China Southern, and Singapore, along with two each from Korean and Qantas; I believe the "extra" Korean A380 is only for the month of January. I personally had the dubious distinction last week of having four moving A380s on frequency at once. Probably not the first time that has occurred, even at LAX, but the first time I've been around when it happened. Speaking of A380s, the airport rearranged some of the parking spots at the west end, where we seem to put at least one A380 each day: 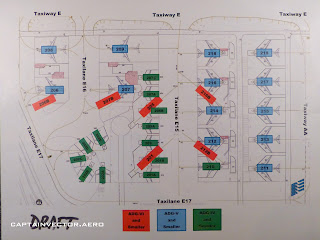 Posted by CaptainVector at 12:00 AM 4 comments: 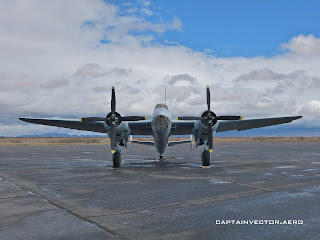 Last month, I showed you this head-on view of a mystery plane. A modest range of identifications came in, and revealed that we have at least one insider lurking amongst you. As several of you noted, this is a WWII-era Tupolev Tu-2. It is reminiscent of more familiar aircraft of that time, most notably to me the Dornier Do 17.  The Chinese also flew Tu-2s in the Korean conflict; the NATO name for it was "Bat". This particular aircraft came out of a cave in China; I was told that it's believed that it was last used in the late 1970s to bomb river ice. I found it on display at the War Eagles Air Museum, which is located on the Doña Ana County Airport outside Santa Teresa, New Mexico. Think El Paso, Texas, and you'll be close. 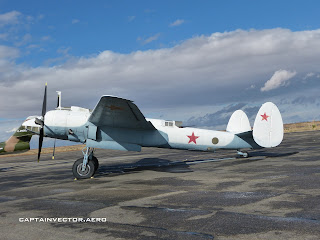 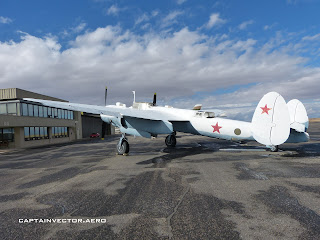 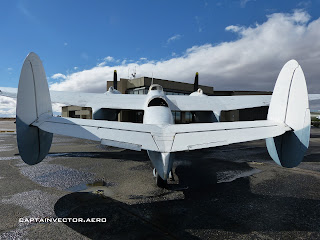 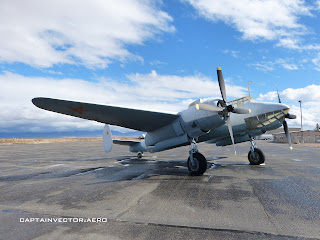