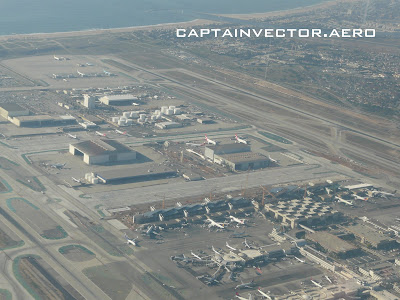 Not quite a year ago, LAX got a brand-new taxiway: Romeo, which runs North-South past several of the maintenance ramps west of the terminal complex. At about the same time we got Romeo, we lost Quebec and later Sierra, which also ran North-South, but along the west side of the International Terminal. Quebec is gone forever, lost to the remodeling of the TBIT, but the relocated Sierra opened up last month, somewhat west of its original location. Here are a couple of aerial photos of our new taxiways. The opening photo is shot from the Southeast; that's Terminal 4 in the foreground. The thing that looks like a checkerboard in the lower right is the main entry hall of the TBIT, where the check-in desks and Customs facilities are located. You can also see how close the west end of the airport is to the shoreline: that's the Pacific Ocean at the top of the shot. 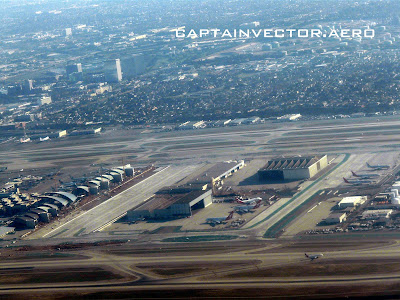 This shot was taken from the Northwest, and shows the taxiways themselves. Sierra is the wide one on the left, while Romeo is the narrower one on the right. Right in the middle is the Qantas maintenance ramp with two A380s and a B747. On the right side of the picture, adjacent to Romeo, can be seen a pair of Virgin Australia B777-300s and an American B777-200; those parking positions are known as the "Romeo gates." The white-roofed building adjacent to the Romeo gates is the Coast Guard station; one of their helicopters can be seen on the ramp. On the left side of the photo is the International Terminal, which is having gates added along the west side. Eventually, the aircraft parked on these gates will push onto taxiway Sierra, creating a bottleneck for the ground controllers.

I don't have a new airport diagram handy, but here's how the new taxiways appear on our ground radar:

North is at the top of this presentation, so we're looking at the entire northern part of the airport, and a bit of the southern side; Romeo and Sierra are right in the middle of the picture.
From their positioning behind the terminal and maintenance hangars, you might surmise that we can't see aircraft on much of these taxiways from the tower, and you would be correct. We can see a bit of each end of Romeo, as well as a section in the middle: 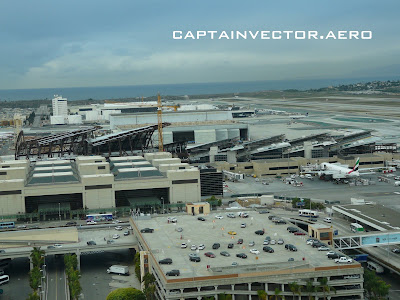 The north end of Romeo: A US Airways Airbus turns from Delta onto Romeo 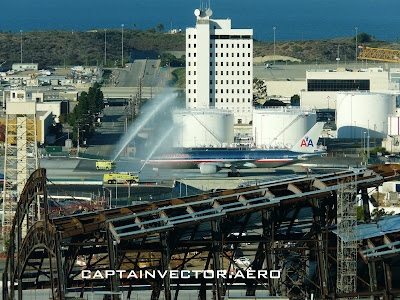 A retiring American B777 captain receives a salute from the LAX fire crews at the mid-point of taxiway Romeo (this is about the location of Checkpoint 2, which is the frequency changeover point on the South Route)

Sierra is going to be just as bad, or maybe even worse: 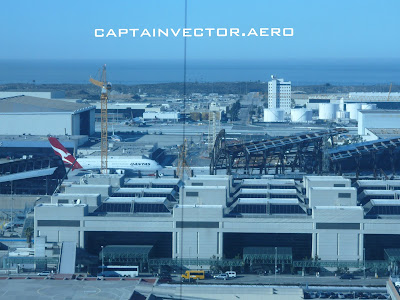 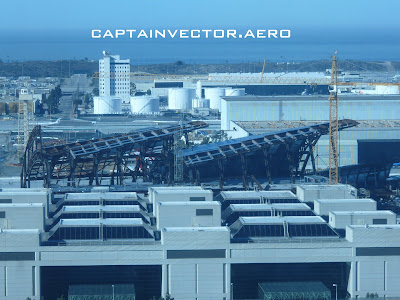 . . . and now you don't. And that's the biggest airliner around. 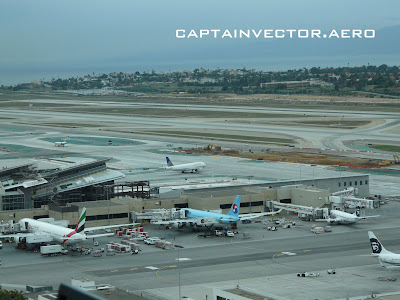 The north end of Sierra: a United Airbus turns from Sierra onto Delta

There are two aircraft on Sierra in the following shot: an American and a United. Can you spot them? 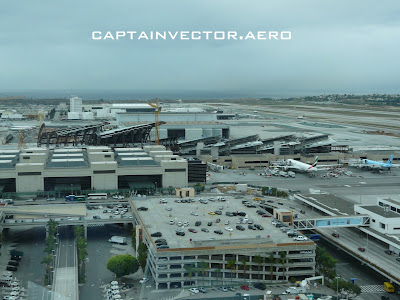 Posted by CaptainVector at 10:07 PM