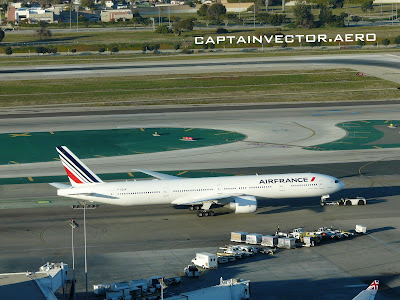 While the Standoff! entry produced a gratifying number of comments, I have to admit that both shots were photographic sleight-of-hand; neither was an actual "Golden Towbar" moment. Several of you correctly noted the tugs on the B757s in the first photo; both aircraft were inbound to gates while the Great Lakes Beech 1900 held at the bottom of the alley - for about ten minutes, as it turned out.

The second photo was a matter of timing; had I snapped another one ten seconds later, it would have been clearly visible what was happening. Alas, I didn't. I did, however, take a number of other shots about the same time. Some earlier, and some a few minutes later, and the Hawaiian Airbus happens to appear in a few of them. The sequence starts with the opening shot (above), which shows the Air France B777 pushing out of gate 25. Because of its size and the position of the gate, the aircraft is not pushed into the D-8 alley, but instead out of the alley onto taxiway Delta. The ground controller, knowing that he has Hawaiian inbound to gate 27, has the Air France jet push all the way past that gate so that Hawaiian can get in while Air France disconnects: 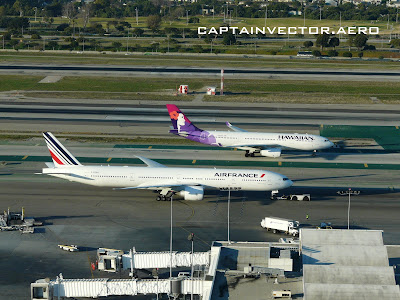 Hawaiian taxis by on Echo as Air France pushes on Delta, adjacent to gate 28, which is where the catering truck is parked; you can see the lead-in line for gate 28 underneath Air France's right engine 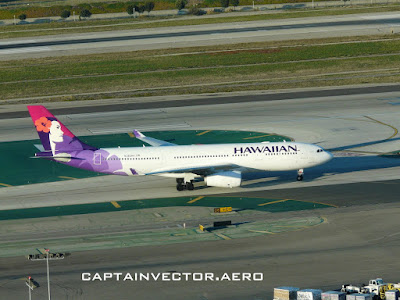 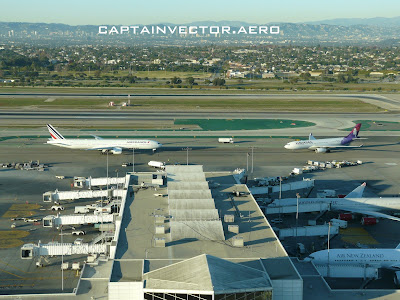 . . . and prepares to pull into gate 27. You can see the lead-in line for gate 27 just to the left of the pair of light poles in front of Hawaiian. Alternatively, look at the catering truck on the access road and then drop your eyes straight down towards the corner of the terminal, where you can also see the stowed jetway 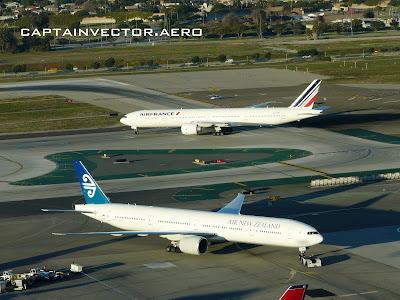 A few minutes later, while Air France takes the runway for departure, Air New Zealand does the same thing from gate 21 that Air France did from gate 25: pushes out of the D-8 alley onto taxiway Delta 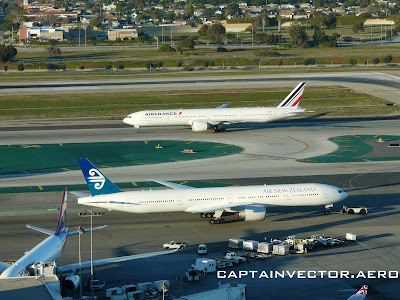 Mere moments afterwards, while Air France starts down the runway and New Zealand continues to push onto Delta, we start to see Hawaiian now parked at gate 27 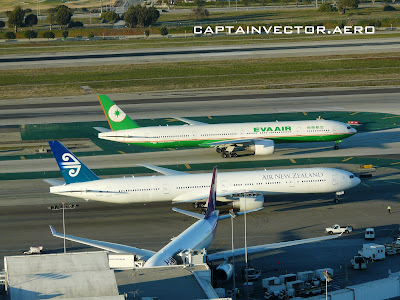 And here, some minutes later, we get a better view of Hawaiian at gate 27 while New Zealand waits for Eva to taxi past. Just for fun, here's a similar shot from another day: 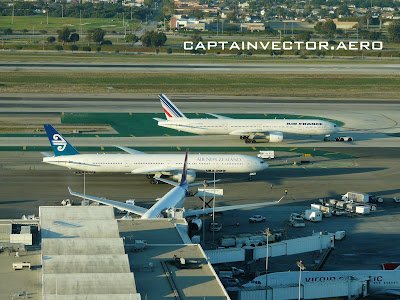 Hawaiian again is on gate 27, but this time New Zealand called first and has pushed onto taxiway Delta. Subsequently, Air France called for push and the ground controller made an unusual (and gutsy) decision to have Air France push onto taxiway Echo. Until one of these two is ready for taxi, they constitute a road block, since there's no way for the ground controller to get another aircraft past them. One other interesting thing: Compare the old Air France livery in this photo to the new one in the earlier shots. Apparently Air France is now one word!
Posted by CaptainVector at 8:43 AM