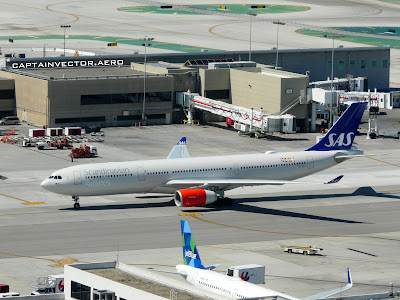 On the heels of Interjet, our latest arrival at LAX is really a return from the past. Scandinavian Airlines was last seen at LAX in 1994, after having flown here since 1954. That first flight in 1954 (in a DC-6) is noteworthy for being the first commercial flight to use the trans-polar route between Europe and North America. Scandinavian arrives several times a week from Stockholm, Sweden. So far, I've seen both A330-200 and A340-300 aircraft in the Scandinavian colors. The fuselage is not white, by the way; instead it's a very light beige or gray (Pantone Warm Gray 2, according to Wikipedia). 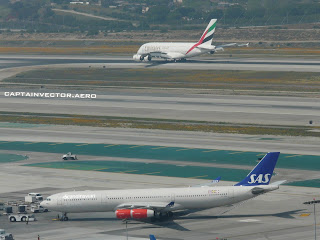 Posted by CaptainVector at 7:42 PM