Revealed: What's special about those pictures 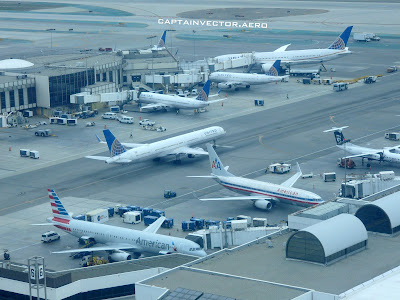 Several of you came close to guessing this one. One critical piece of information is that American Airlines has gates at Terminal Four, while US Airways parks at Terminal Six. For the time being, the new American is using gates at both terminals. Both of these shots illustrate a first in the US Airways - American merger: The first legacy American Airlines aircraft to park at a US Air gate at LAX, and the first US Airways aircraft to park at an American gate. True, in the opening shot the other airplane at a US Airways gate is wearing the new American colors, but if you look closely you'll see that it's a repainted US Airways aircraft. In the second shot, the aircraft still wearing the US Airways livery is a B757. What's interesting about that is that so far, the only B757s we've seen at LAX getting the new American paint are the former US Airways airplanes; the American B757s seem to be retaining the bare metal AA livery. I suspect that may be because many of those airplanes are being phased out, and as such don't merit the expense of a new paint job. Many of the American B757 routes out of LAX are now being flown either with B737-800s or A321s. 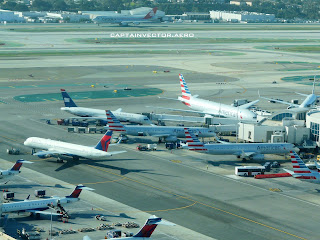 Posted by CaptainVector at 7:57 PM