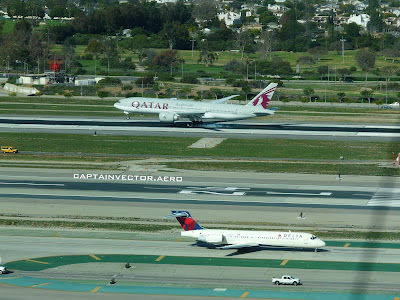 I can't really claim that this is a new arrival, since they've been flying here for a couple of months now, but Qatar Airways now serves LAX from its home base in Doha, Qatar. This is a fifteen hour flight in B777-200LRs that are configured for 259 passengers. We actually started receiving Qatar freight flights last year, ahead of the passenger service which just started up in January. The freighters fly a different route, though: they arrive from Mexico City, and then depart for Liege, Belgium, also in B777-200s that wear the same livery as the passenger haulers. This has, on one or two occasions, caused some confusion when a ground controller has attempted to take the passenger arrival to the air freight ramp. Before the arrival of passenger or freight service, we have seen this identical livery at LAX in the form of Qatar Amiri Flight, which serves the government and royal family, although not actually part of the airline.
Posted by CaptainVector at 8:13 PM