What happened? Part 3 - The action

Today I'll show you what I understand to have taken place during the runway incursion we had at LAX on Sunday, October 25th. Involved aircraft were Northwest 623, a B753 departing for Honolulu, and Midwest Express 1503, an E190 arriving from Milwaukee.

Let me reiterate that while I witnessed the incident, I was not working any of the involved positions, nor am I a part of the official investigation. Everything I report here is either my personal observation at the time or information I have obtained from public sources. 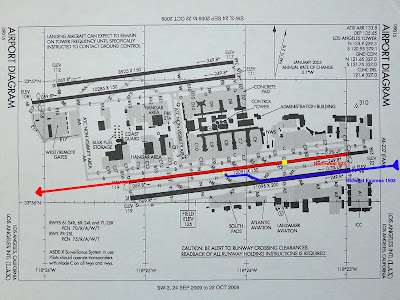 Midwest Express (Brickyard) 1503 landed on runway 25 left and exited at H-4. This put the aircraft on our new center taxiway, H (Hotel). The tower controller instructed the pilot to hold short of runway 25 right, and the pilot acknowledged the instruction.

Subsequently, Northwest 623 was cleared for takeoff on runway 25 right.

The Safety Logic system in the Airport Surface Detection Equipment (ASDE) issued a 'runway occupied' warning as Northwest passed taxiway G (Golf). On the graphic above, the two yellow spots mark the location of the two aircraft when the safety logic warning went off. The tower controller immediately told the Midwest Express pilot to hold his position, and again the pilot acknowledged.

Northwest continued the takeoff, becoming airborne in the vicinity of taxiway N (November).

According to media reports, the closest proximity of the two aircraft was 82 feet (about 25 meters).