Last time I told you about the marine layer and its affect on LAX operations; this time I'll tell you about our other common restriction to visibility: Haze. Los Angeles is well-known for its sometimes lousy air quality, generally referred to as "smog". That's not a term used in aviation weather reporting; instead we use "haze", which includes smoke as well as other dry particles like dust. The big difference here is dry. The marine layer is moisture-based, and so is reported as cloud, fog, or mist (The difference between fog and mist is intensity: the international standard for fog is visibility of 1 km, which in the US is reported as 5/8ths of a mile; greater than that is reported as mist).

Haze, unlike fog or mist, doesn't 'burn off' when the day warms up. Instead, the rising sun just creates more glare (and heat: hazy days tend to be hot days). Often, the visibility is just barely enough for the airport to be VFR (3 miles), but there's not a cloud to be seen. The arriving aircraft can often see the airport well enough to shoot visual approaches, but departures can't see the preceding aircraft reliably enough to use visual separation. Thus, like with the marine layer, we can sometimes get airplanes in easier than we can get them out (all of this assuming we're on west traffic, which is usually the case). As you have probably surmised by now, these conditions do not produce good pictures. This has been frustrating for the last couple of days, as we've had several aircraft that I don't have in the photo archives. 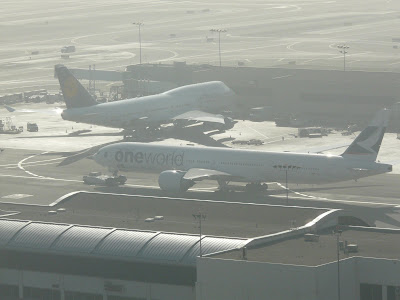 This is one: Cathay Pacific has been bringing in B777-300's for a while now, but the only ones I've seen up til now have been at night. This one not only was the first I've seen during the day, but also was the first Cathay Pacific aircraft I've seen with the OneWorld 10th anniversary livery. The same day we also had Malaysia and Japan Air in B777's (both new here), but I didn't get them at all. 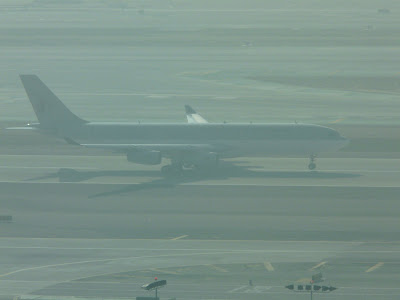 While I have shot Qatar here before, I'd hoped to get a better shot than the ones from a couple of years ago on the Atlantic Aviation ramp. No such luck. This is a bit of an oddball aircraft: an Airbus A340-200, seen here departing off runway 25 right. 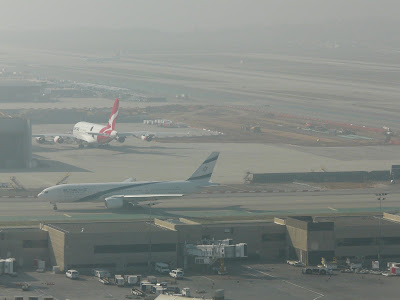 Another view through the haze: An El Al B777 on taxiway Sierra, taxiing for departure, with the Qantas A380 in the background. As you can see, we've got more construction in progress: the former TWA maintenance ramp is getting trimmed to make way for the taxiway Delta extension as well as the new north-south taxiway. 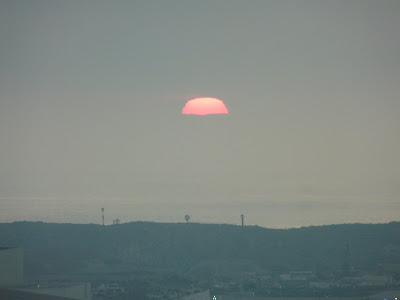 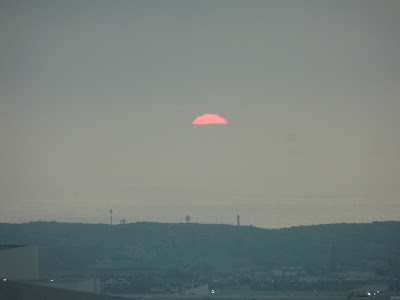 In these two shots, you can see that while we've got haze on the airport, there's other stuff offshore: the setting sun seen between layers of clouds above the horizon.
Posted by CaptainVector at 8:54 AM