Shot of the day: How 'bout them Sox? 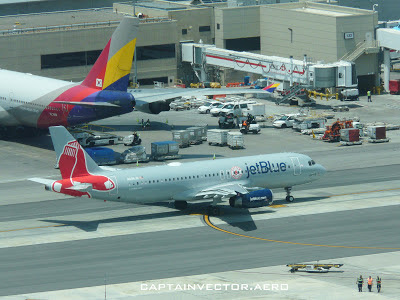 I've only seen this airplane once, and it was at night. But one of my cohorts caught it here in broad daylight for you. This particular aircraft used to be named "Blue Yorker" * but now, where the name once was, there's a ribbon commemorating the 100th anniversary of Fenway Park. For those of you who visit from outside the states, the Boston Red Sox is a major league baseball team; JetBlue recently bought the naming rights for their spring training facility in Fort Meyers, Florida.

* It's slightly ironic that the plane wearing the Sox livery used to be named "Blue Yorker". The Sox and the New York Yankees have been American League rivals for decades, dating back to when Boston sold Babe Ruth to the Yankees in 1919. I have a family legend that touches on this: My mother, who grew up in Boston, has told the tale of her parents betting on the outcome of the Yankees - Red Sox pennant series. The loser had to paint their bedroom. I don't remember now who was betting on Boston, but the story goes that from then on their bedroom had "Damn Yankees" on the ceiling.
Posted by CaptainVector at 7:31 AM