Several of you have posted comments with questions recently, so today I'll address some of those.

First was a question about the information shown in the data tags on the ground radar. This is a typical display for a controller working the north side of the airport, with north at the top of the radar display: 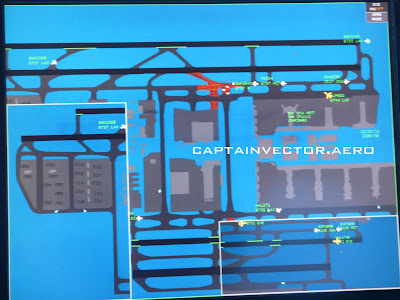 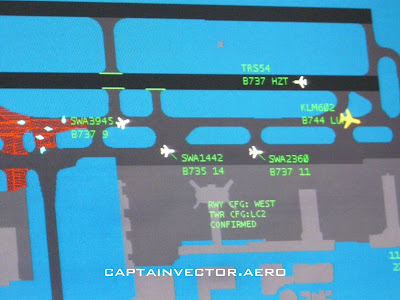 Here's a close up of the east end of the 24 complex. In this shot there are three arrivals (SWA3945, SWA1442, & SWA2360) and two departures (TRS54 & KLM602). The first line is the aircraft's callsign. SWA = Southwest; TRS = Citrus, the radio callsign for AirTran. The second line has the aircraft type and a field for destination or waypoint information. The arrivals each have had their assigned gate entered (9, 14, & 11, respectively), while the departures show a code for the assigned departure procedure (Holtz and Loop). The target for KLM is yellow because it's a wake turbulence aircraft, in this case a B744. If you take a close look at the first picture, taken a bit earlier, you'll see a couple of the Southwest arrivals before their gate numbers were entered; their tags have LAX in the destination field. You can also see some other departures on the Casta and Perch departures, along with one headed for Santa Barbara. 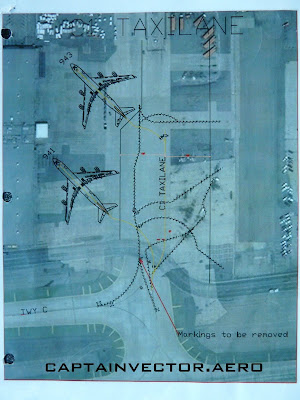 Another commenter asked about one of the cargo ramps. The C-1 cargo ramp (so called because the ramp entrance is taxiway C-1) has recently been reconfigured to accommodate two aircraft. This diagram provided by the airport shows the new parking positions as well as the old markings that will be removed. 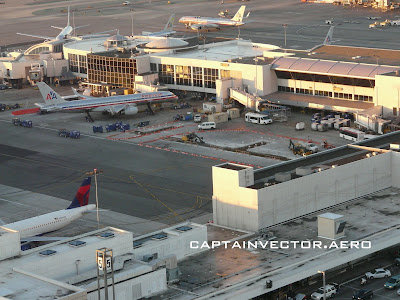