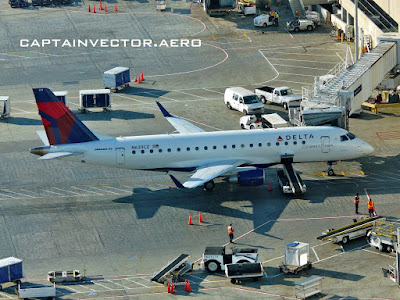 A recent reader comment included a question about Compass Airlines. Compass is based in Minneapolis, and is now one of the Delta Connection carriers, having previously flown as Northwest Airlink before the Delta-Northwest merger. We see Compass just once a day at LAX, on a mid-morning round trip from and back to Kansas City. On this route, they compete with Frontier/Republic ("Brickyard") and Southwest, all of whom operate larger aircraft more frequently. Compass has a fleet of about forty (40) Embraer 175s with a passenger capacity of 76. They are the only regular E175 operator at LAX, although Republic does occasionally show up in a slightly-smaller E170. Republic and Air Canada both bring in the larger E190, easily distinguished by its over-wing emergency exit and additional fifteen (15) feet (~5 meters) in length. As a Delta Connection operator, Compass parks at Terminal 5.
Posted by CaptainVector at 1:02 PM