Yesterday's pictures of the retro paint jobs got me thinking about a theme that could be continued, so here goes: 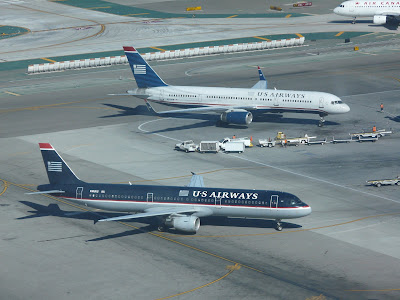 We'll start with US Airways, which is currently transitioning from the dark scheme seen on this Airbus 321 to the white scheme on the B757. This is part of the merger with America West. The dark-topped scheme, which although it appears black is really a very dark blue, was part of the rebranding from "US Air" to "US Airways" in the mid-1990's. These two aircraft models are easy to mistake for one another when seen alone; seeing them here together makes the distinctions easier to pick out. While the A321 is the largest of the narrow-body Airbuses, the B757 is larger still. Other detail differences: the shapes of the noses and tailcones; the winglets (all of the small Airbuses have the same vestigial winglets, while Boeings will either have none at all or great big ones as seen here); and the main landing gear (Airbuses have single-axle main gear, while the B757's have dual-axle units). Sadly, the Boeings are gradually being replaced by the Airbuses. 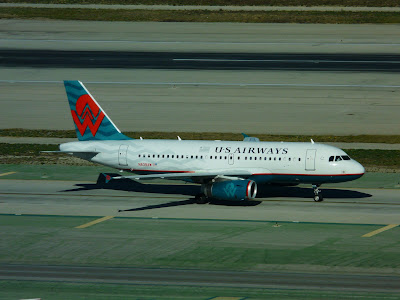 As I mentioned yesterday, this was America West's last scheme prior to the merger with US Air. This scheme appeared after America West's bankruptcy in the early 1990's. 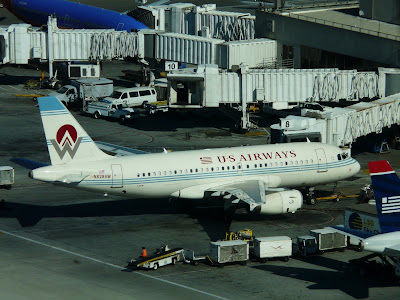 US Airways has some of its Airbus A319's painted in heritage schemes: This one is the original America West scheme. 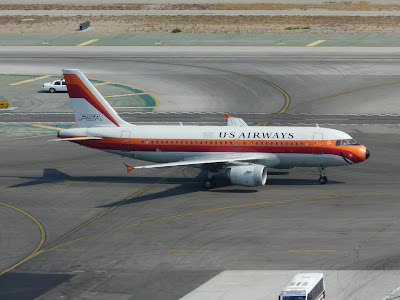 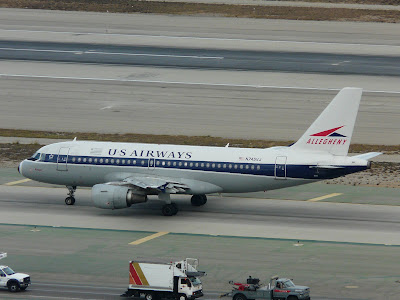 One more heritage scheme: The airline was originally named Allegheny before rebranding itself as US Air in the late 1970's. 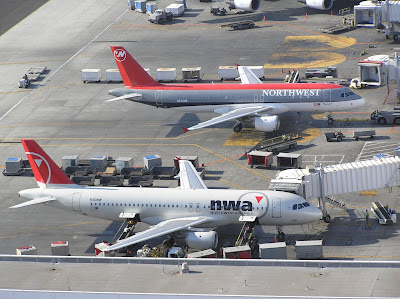 As I mentioned yesterday, Northwest is now part of Delta, and the aircraft will be repainted accordingly. Before Northwest's current silver scheme was the red-topped scheme; a few of these are still around. Here are new and old schemes seen on Airbus A320's. 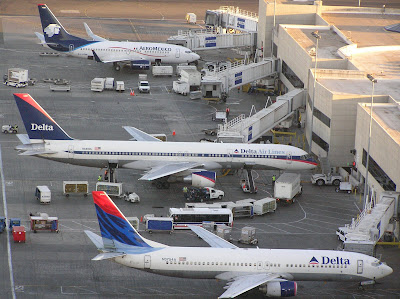 Delta has gone through several schemes since I started controlling airplanes in the early 1990's. Sadly, I don't have any shots of the original widget scheme they used all through the 1970's, 1980's and early 1990's. The B757 in this picture shows the scheme that replaced it in 1997 only to be quickly replaced itself in 2000 by the tricolor scheme seen on the B737. The last of these 'old new' schemes was repainted in the summer of 2008, while I continue to see the tricolor scheme (my favorite of all the Delta schemes I've known) daily. 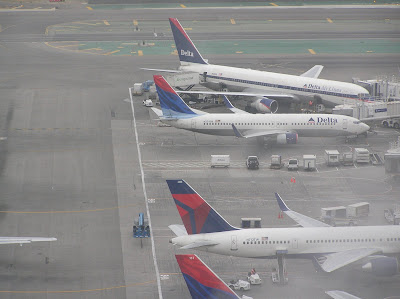 Here are all three Delta schemes together. Unfortunately the airport's physical plant is just west of the tower, and thus the steam that obscures this shot. 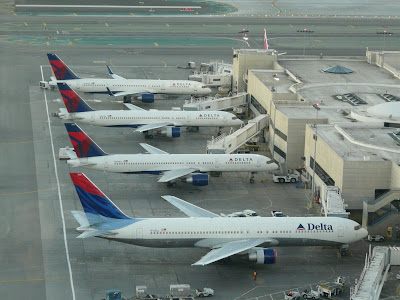 In 2007, following Delta's bankruptcy, the latest 'lazy widget' scheme appeared, seen here on a trio of B757's with the former tricolor scheme on a B767. One more before and after: After several decades of their original mustard brown/gold paint scheme, Southwest updated their livery to 'canyon blue' in 2001, with slightly adjusted lines. Even though this started nearly a decade ago, there are still aircraft with the 'classic' paint around.
Posted by CaptainVector at 1:06 PM