Happy Birthday to me! Well, that was supposed to be the idea anyway - a friend from the theater had planned an informal get together, and I ended up being a no-show. I hear the cake was great, though. While most people have cards and perhaps presents for their birthday, I instead had a tentanus shot and antibiotics, with a flu shot as lagniappe.

For the background of this story, I'll refer you to my last entry, wherein I mentioned operation fix-a-cat. Saturday, as I was leaving for work, I discovered that the trap under my motorhome contained a cat. It looked like one of the ones that we're targeting, but I opted to deal with it when I got home that evening. When I arrived home it was becoming noticeably chilly, and so I chose to bring the trapped cat inside and transfer it to a larger crate. I thought the cat could be kept more comfortable that way, since the next appointment at the clinic isn't until nearly the end of the month. The transfer went well up to the point when I went to remove the trap from the mouth of the crate so I could close the door. The cat made a break for the gap between the trap and the crate, and not wanting it loose inside, I grabbed it. It then grabbed me with teeth and claws. Once it was in the crate and the door safely latched, I assessed the situation. My left hand had taken the brunt of the onslaught and had seven or eight scratches and easily twice that many puncture wounds, while the right got off lucky with about ten bleeders. Several minutes of running water was followed by soap and then a couple minutes' more water. I ended up wearing gloves to bed to keep from getting blood all over everything.

Having to be at work first thing in the morning, I took no further action until Sunday afternoon. Brandishing my scarred mitts earned me an early departure from the tower despite the fact that I was the third person asking for leave. Upon reaching home, I transferred the cat to a smaller crate (being sure to wear gloves this time) and hauled it over to animal control. Since it had bitten someone, there was extra paperwork involved in getting rid of it, and the weekend part-timer at the counter was agog at the condition of my hands (by now the left had swollen to about softball size, and my right thumb was sufficiently swollen that it was very difficult to hold a pen and fill out the form). The standard procedure in cases like this is to quarantine the animal for ten days to ensure that it doesn't have rabies. When I asked about how and where it might be possible for me to get a rabies vaccination if that became necessary, the people behind the counter (now three in number) seemed horrified, and had no useful suggestions beyond that of getting a tetanus booster.

The fortunate and ironic thing about this whole thing is that my yearly FAA flight physical was scheduled for the next morning. Despite my still swollen and scab-covered hands I managed to pass. Upon hearing my tale of woe, the doctor prescribed a course of antibiotics as well as a tetanus shot. However, discovering that he hadn't any tetanus vaccine on hand, he did give me a flu shot (at my request) in addition to the antibiotics, which he provided gratis. He also said that he could have the rabies stuff on a days' notice if it became necessary.

I wouldn't have thought that a tetanus booster was as hard to come by as mine turned out to be: Besides the doctor's office, I had to try seven more places before finding one that had the stuff in stock. You'd think there'd been a run on the stuff! 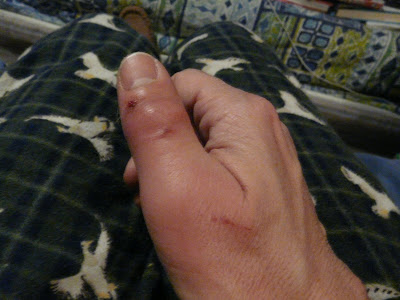 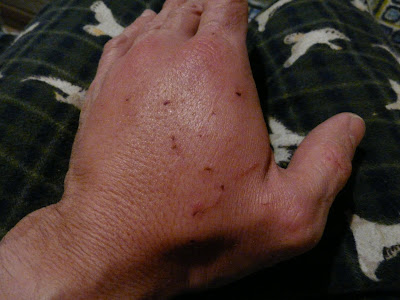 These shots were taken Sunday night, not quite 24 hours after the excitement.
The swelling was worse the next day!

I started this entry during a break at work on Monday, but at my next opportunity to get to the iBook I had sufficiently reduced mobility in both hands that trying to type was a ridiculous exercise in frustration. It's now Wednesday afternoon, and the swelling in my left hand has subsided such that some of the normally-visible tendons have reappeared. My right thumb, however, is still unbendable and, if it weren't rather red, would look like I stole it from the Pillsbury dough-boy or the Michelin Man.

Okay, that's enough about cats and my sado-masochistic tendencies. For all of you who stop by for airplane or LAX stuff, here's a couple of shots of the first Northwest aircraft to show up here in their new Delta paint schemes: 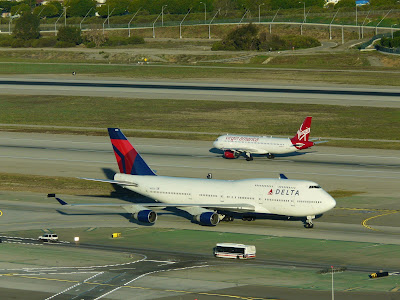 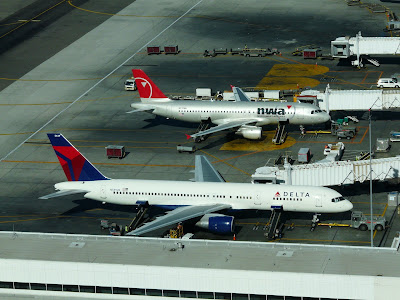 While we see plenty of Delta B757's each day, this was the first Northwest repaint that I've seen.
And while I'm at it, here are some other recent special shots: 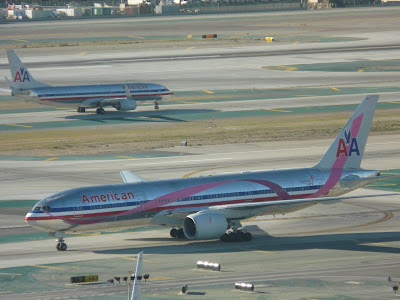 I first saw this American B777-200 with its Breast Cancer ribbon when I paid a visit to DFW's East tower last month. This is the first time I've seen it at LAX. That's a B737-800 holding on the center taxiway (now H, previously AC). Though it seems inconceivable, there's a runway between these two aircraft. One of our whole runway complexes would fit between one of DFW's runways and its adjacent taxiway. 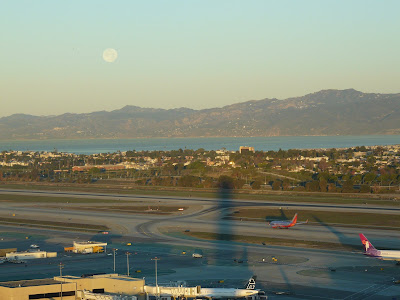 Here's a neat early-morning shot of the setting full moon, reportedly the biggest-appearing of 2009, along with the tower's shadow. 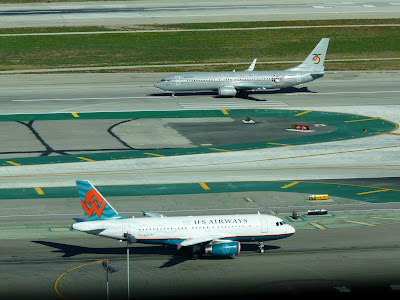 A couple of retro paint jobs: in the foreground, America West's last paint scheme before becoming US Air. In the background, Alaska's 75th Anniversary commemorative. 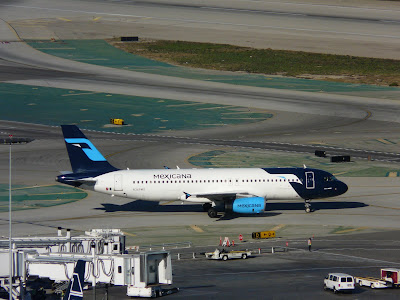 Several of my coworkers told me about this Mexicana Airbus long before I was able to catch it with the camera. Note that it has a US registration number. I've seen this on some other foreign carrier aircraft as well; presumably they're leased from a US-based company. 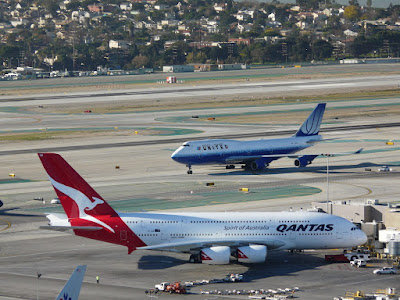 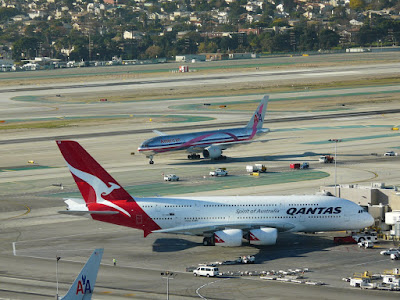 Email ThisBlogThis!Share to TwitterShare to FacebookShare to Pinterest
Labels: B747, B757