Happy 2009 (and good riddance to 2008). Hopefully this new year and new president will be better than the previous ones.

My holiday road trip went well - more smoothly than usual, in fact. Besides the Grand Canyon and Meteor Crater, I also paid visits to friends in Monroe, Louisiana, and Dallas, Texas. Over the two-week period, the Jetta logged about 5500 trouble-free miles. The new 5th gear ran smoothly and definitely made the car feel better at interstate speeds (probably at least 4500 of those miles were done at 75 mph or higher). Average fuel economy, over 15 tanks, was 48.56 mpg. This was done with the newly-fitted O.E.-sized Sprint 357/442 injector nozzles; I swapped out the PowerPlus 520 nozzles just before setting out on this trip. After running them for about 4000 miles, I just wasn't happy about the additional smoke they produced. The additional power that they offered was nullified by constantly checking the mirrors and trying to feather the accelerator pedal to avoid creating a smokescreen that honestly would challenge that put out by an old big rig. They also cost about 2-3 mpg over the original injector nozzles; the last tank with the big nozzles came out to 46.15 mpg, while the latest tank with the new nozzles was 49.56 mpg in similar usage (pre- and post-trip). The next big Jetta project (once I finish cleaning out all the road trip detritus) will be a lighting upgrade: After nine years and 210K miles, the headlights are in serious need of replacement. The new E-code units will add foglights, for which additional wiring will need to be run. I've already got the new switch installed (that was the easy part!) Minor mods to the rear (rear fog and 5 brake lights) are also planned.

Other big projects in the works: Restoring the Baron to flying status (hopefully while avgas is still relatively affordable at under $5/gallon), replacing the heater core in the Rover, and repainting the roof of the motorhome.

Meanwhile, operation fix-a-cat is well underway. Last summer's explosion in the kitten population in the neighborhood is threatening to repeat itself as the surviving cats are now of age to repeat the process. In collusion with one of my neighbors, I've starting catching some of the friendlier cats and taking them to a local clinic to get "tutored". The first two (Shyler and Blackie) went right before the end of the year, and the third (Muffin) came home yesterday. I've appointments for two more at the end of the month. However, unbeknowst to my neighbor, who can't help but feed every stray cat she sees, there will be some that don't come back: Yesterday a completely unknown and obviously feral cat appeared in the trap, and received an all-expense paid trip to animal control. While I'm willing to foot the bill for fixing the local 'friendlies' and giving them shots, I have no intention of trying to fix every cat in the neighborhood: there's just too many of them - and that's just the ones I already know about! 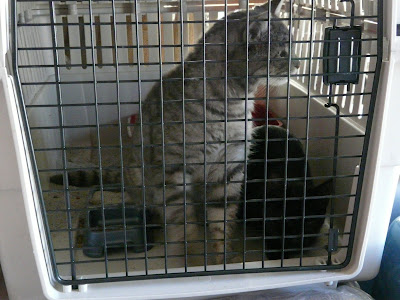 Shyler and Blackie in the post-op crate 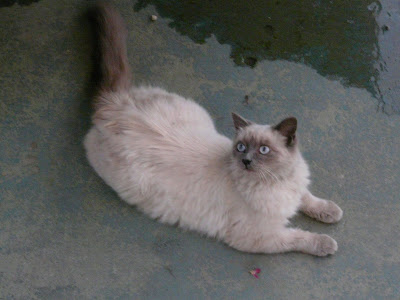 Meanwhile, at work, I'm transitioning to a new supervisor and new days off. Part of the change is a trainee swap. My previous trainee, who's currently in the ground control classroom phase, has been replaced by a new one, who has made good progress so far on clearance delivery. I'm expecting we'll get him a checkride sometime this coming week (while your calendar may say that today is Friday, it's Monday in my world). Also, we've seen the presence of two A380's on the field at one time: 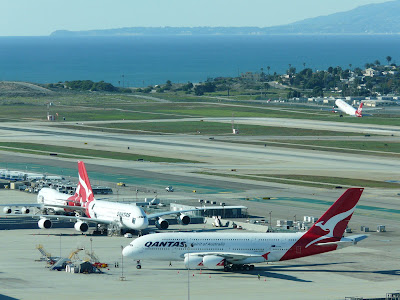 Two Qantas Airbus A380's on the north ramp, awaiting their evening departures. For comparison, there's a B747-400 tail-to-tail with the one facing the camera. Rumor has it that they're having a hard time filling the seats on these flights.
Posted by CaptainVector at 7:34 AM