Today is Flag Day in the United States, a day that commemorates the anniversary of the Second Continental Congress' adoption of what became the US flag on this date in 1777. So fly your stars and stripes!

The last couple of my work weeks have both ended with mid-shifts that featured more than the usual amount of unusual things taking place. We've have earthquakes that were felt in the tower, aborted takeoffs, debris on runways and taxiways, blown tires, hot brakes, lost pilots, befuddled trainees, and confused tug drivers. All in a day's (well, night's) work, but enough to make it memorable for a little while.

Meanwhile, in some recent entries I've mentioned the return of seasonal operators at LAX. Memorial Day weekend is the opening of the summer travel season, and besides carriers that show up for the summer, we also see an expansion of destinations offered and larger equipment used. 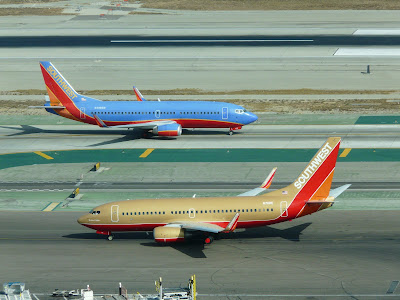 For example, I've recently noticed Southwest now going from LAX to St. Louis, a route previously served only by American. Southwest has also started service between LAX and Baltimore-Washington, which is also flown by AirTran and United. 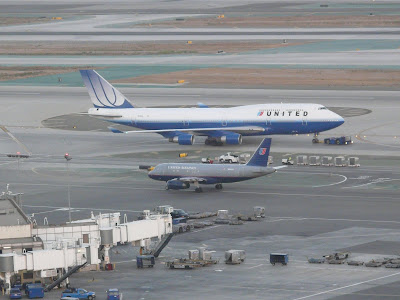 United has added flights to Bozeman, Montana, and Jackson Hole, Wyoming. Jackson Hole has been an occasional ski destination before, but Bozeman is new. I've also seen B757's introduced on the weekend flights to New Orleans, a route United normally covers with A320's, so I guess more folks are heading down to the Big Easy again. Who dat?! 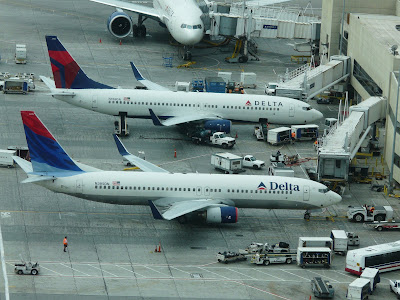 Delta has just started flights from LAX to Hartford, CT, a route not previously served by anyone within recent memory. They're using B737-800's for the four and a half hour flight. Delta has also chosen to jump into the crowded pool of carriers flying to San Francisco - we've already got five other passenger carriers covering that route. I think we've got more carriers going between LAX and SFO than any other destination: Besides the six major passenger carriers, we've got that many more cargo operators as well. In other Delta news, a while back I mentioned that the MD-90's had been replaced by Skywest CRJ's on the Salt Lake City route; I've since seen them a few times going to Minneapolis-St. Paul, a former Northwest destination from LAX. Meanwhile, former Northwest A320's are now serving the Delta hub in Cincinnati. The former Northwest A330-200's have also returned on the Tokyo run. 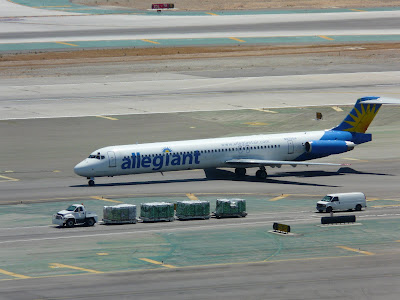 For unlikely destinations, Allegiant is the one to watch. They've just started flights to Idaho Falls, ID, and Pasco, Washington. At the moment, I don't think Allegiant has any routes at LAX in competition with anyone else; everywhere they go from here, they're the only way to get there. 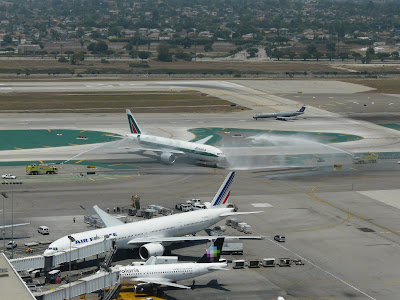 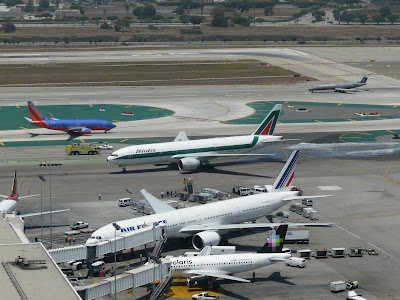 And Alitalia has returned to LAX after over a year's hiatus, offering our only direct service to Rome, Italy. This eleven-hour flight is served with a B777-200, and was greeted by a welcoming spray from the fire department on their first arrival last weekend. 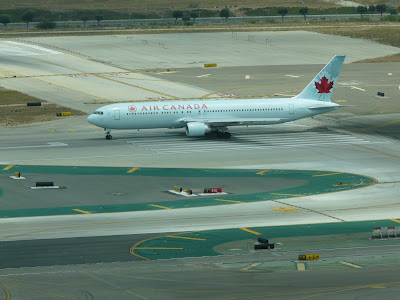 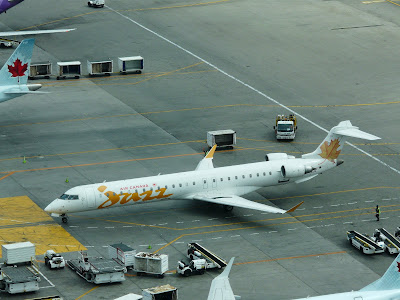 And that reminded me of something we haven't seen lately: Air Canada Jazz. I don't recall when I last saw a Jazz plane here, but it's been some months now. Jazz only went from here to Edmonton, a route that mainline Air Canada also serves with E190's. WestJet also flies to Edmonton, using B737's. Although I haven't been counting, WestJet does seem to be increasing its presence at LAX lately, with service to Calgary and Vancouver in addition to Edmonton. 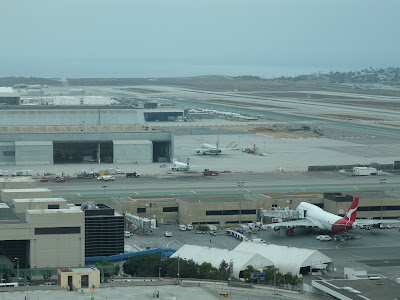 On my airport tour, I showed you a pair of Qantas B747's inside a hangar. This is the normal tower view of that hangar, seen over the top of the international terminal. In this view, we're seeing the opposite side, which has much lower doors and roof. Although I don't know if the super will actually fit inside, this building is large enough to completely hide an A380 from the tower.

A comment posted to my previous entry questioned the placement of the RWSL lights in the runway. LAX's RWSL system has two components: Runway Entrance Lights, which are installed on taxiways that enter or intersect the runway; and Takeoff Hold Lights, which are installed along the runway centerline. The THL's are what were shown in the photo last time. I borrowed this graphic from MIT's Lincoln Laboratory:

The onset of June gloom has apparently brought with it summer cold season, as I've had draining sinuses and a sore throat for well over a week now. Enough already!
Posted by CaptainVector at 3:59 AM