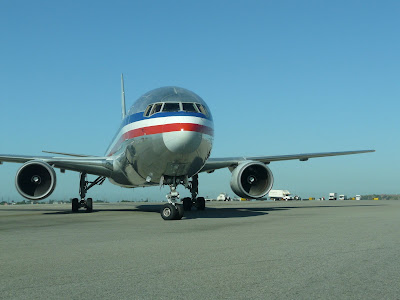 I was assigned a new controller trainee a couple of weeks ago. Part of the training process is a ground-level tour of the airport, conducted by one of the airport operations folks. We usually wait until the new controller has started training on ground control before we do this, as it will make more sense to them that way. The reason for taking them on the tour is that it gives them a chance to see the airport from the pilots' perspective, which is entirely different from that of the controllers in the tower. What makes perfect sense to a controller looking down on the airport can be utterly confusing to a pilot looking out the cockpit windows. Taking an airport tour helps controllers understand that, which in turn can help us do a better job formulating instructions for the pilots. This is especially because as a controller, I only work at one airport; most pilots fly from one airport to another, and often do that several times in the course of their day. I've had visiting pilots tell me that they have days that take them through half a dozen different airports.

Besides the training value, the tour also gives me a chance to take some pictures from a completely different angle: 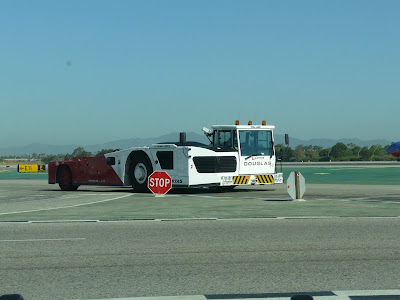 I've shown you super tugs before, but this is what one looks like from the front seat of your average car. It says Douglas on the front, but as far as I know that's no relation to the former US aircraft company; these are built by the British firm Douglas-Kalmar. This example is the largest model, capable of handling the Airbus 380. Fully loaded, the A380 can weigh 1.2 million pounds; the tug itself only weighs about 75,000 pounds. James Bond fans may recall seeing Bond drive one of these in the 2006 movie Casino Royale (I'm going to have to go watch that one again!) 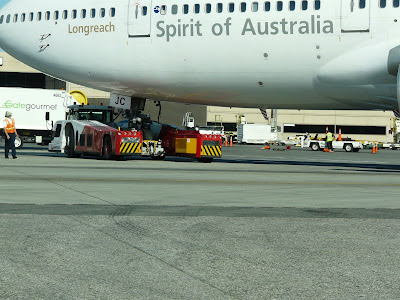 Here's a super tug (also known as a towbarless tractor) in action, pushing a Qantas B747 off a gate at the international terminal. 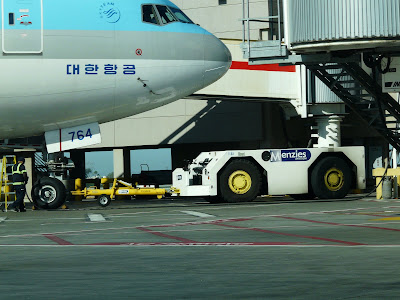 In comparison, here is a more typical pushback tractor, which uses a towbar to connect the tug to the aircraft's nosegear. Pushing an aircraft backwards with one of these is approximately like backing a trailer with your car. I use a little Clarkat to push the Baron into its hangar, and it's not easy to get everything lined up and keep it that way as the plane goes through the door. It's possible to get the rig jack-knifed just like an 18-wheeler, and a broken towbar is the least damaging result you can hope for. This happens at LAX at least once a week, and everything stops while the towbar gets repaired or replaced. Thus, controllers like the super tugs: No broken towbars! 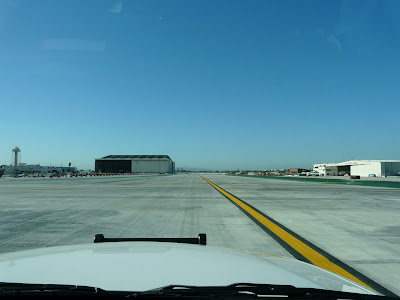 Here's a south-looking view of our brand-new Taxiway Romeo, which had been open for less than a week when I took this shot. You can tell that this is a taxiway by the color of the centerline: Yellow for taxiways, white for runways (at night, the edge lighting is also color-coded: blue for taxiways, white for runways). The big hangar is American Airlines maintenance, while the Coast Guard station is on the right. The brown building just past the Coast Guard is to be the new fire station. That hill in the background is Palos Verdes. 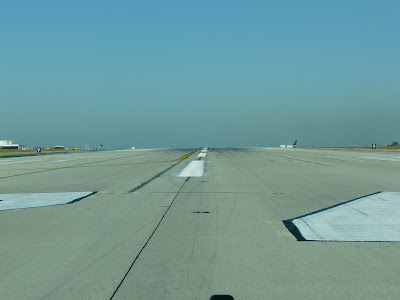 Here, we're on the east end of Runway 24 Left, looking towards the beach. Notice the white center stripe. Also observe the heavy jet in the distance; that's a Delta B747 that just arrived from Tokyo on the parallel runway (24 Right) and is now on Taxiway AA and about to cross our runway. As you can see, the runway isn't flat; this end is lower than the west end. The runway is also crowned, just like a road, with the center being higher than the edges. 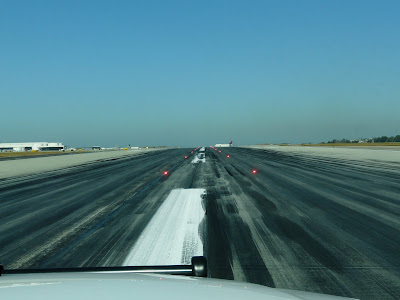 Same runway, a few seconds later. We're now a few hundred feet from where the previous shot was taken, at a speed of about 45 mph. The Delta B744 is crossing the runway about a mile and a half in front of us. Notice the red lights on each side of the runway centerline; these are Runway Status Lights (aka RWSL's), one of our newest pieces of safety equipment at LAX. They're tied into our ground radar and automatically come one when the system detects that the runway is not safe to land or take off. Similar lights are installed at some taxiway intersections; their purpose is to indicate when it is not safe to cross a runway. 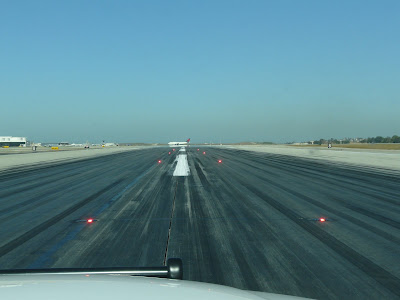 Another view as we drive down the runway. We are now nearly 2,000 feet down the runway. If you look on the left and right sides of the runway, you can see black signs with a white "8" on them, signifying that there are 8,000 feet remaining to the end of the runway. Look at how black the concrete is here; that's rubber from the tires of landing airplanes. On our primary arrival runways, it gets so bad that the airport has to repaint the center stripes on a weekly basis, and periodically they'll have to close a runway for rubber removal. I read somewhere that airliner tires sometimes have to be replaced after 100 landings, and no wonder! 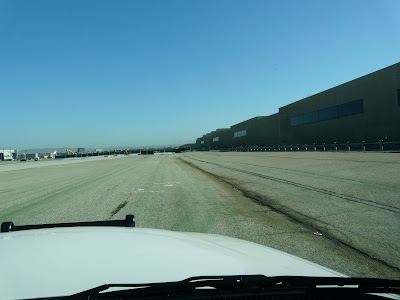 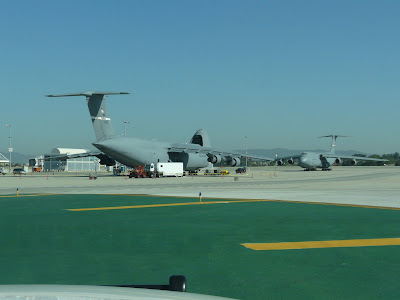 A pair of C-5A Galaxy's parked at the west end of the airport, in the remote gate area. 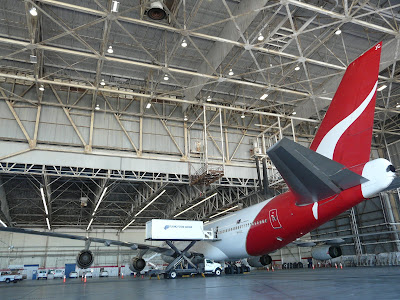 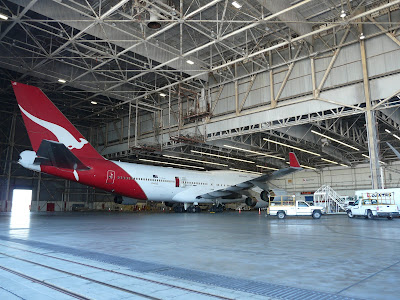 A couple more big planes . . . indoors! A pair of Qantas B747's getting serviced after their early-morning arrivals. They'll spend the day on the ground at LAX before leaving late in the evening. 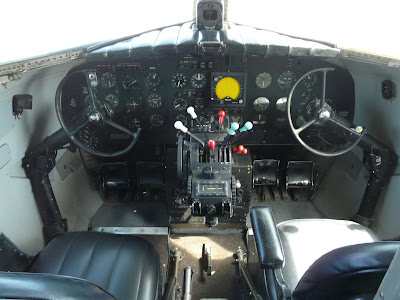 You've seen the DC-3 parked at the museum on the south side of the field in the background of many shots; here's a shot of the cockpit. 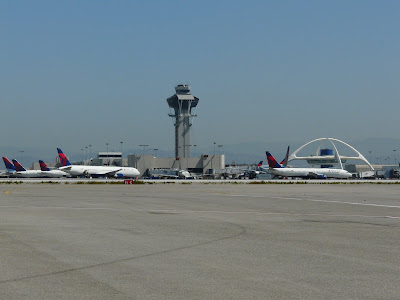 And here we see the tower and the Theme building, as seen from beneath the nose of the DC-3. The building that appears to be the base of the tower is actually Terminal 5.
Not so easy to see: the two runways and four taxiways between here and there!

If you'd like some more about the super tugs, try these articles:

For more about the Flight Path Museum at LAX:

Email ThisBlogThis!Share to TwitterShare to FacebookShare to Pinterest
Labels: RWSL