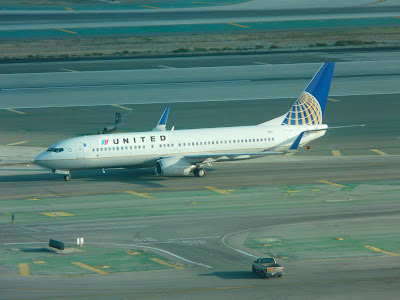 In early May, Continental Airlines and United Airlines announced plans for a merger that would once again make United the nation's largest airline, a position I believe it held until dethroned by the Delta-Northwest merger. While regulatory approval is expected, it has yet to come to pass. As you might expect, there's a certain amount of opposition from cities/states who fear losing jobs, unions representing flight attendants and pilots, and consumer groups and government regulators who see reduced competition and higher prices.

At LAX, Continental and United already share Terminal 6, so no big change will be required there (unlike Delta and Northwest, who were on opposite sides of the airport). While LAX is a United hub, for Continental it's a destination served by flights from its hubs in Newark, Cleveland, and Houston. United also flies from here to Newark, but the only other destination duplication the two carriers have at LAX will be Honolulu and Maui, Hawaii. United flies B757's and B767's between LA and Hawaii, while Continental was the first carrier to use B737's from here to the islands. With such minor overlap, it seems likely that LAX will see only a slight net decrease in flights as a result of the merger. I've heard that Continental's headquarters in Houston will be moved to United's offices in Chicago, but flights out of Continental's Houston hub are expected to increase. 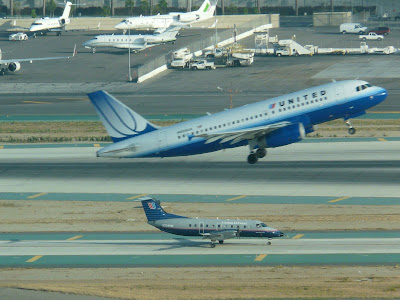 A United A319 departing runway 25 right as a Skywest E120 waits between the runways. 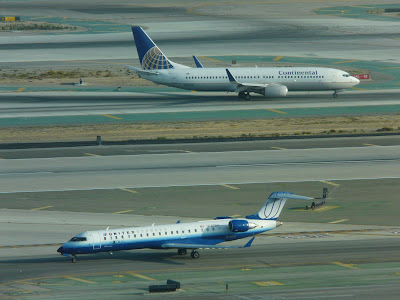 Continental's turn to wait, while a Skywest CRJ7 taxis in. 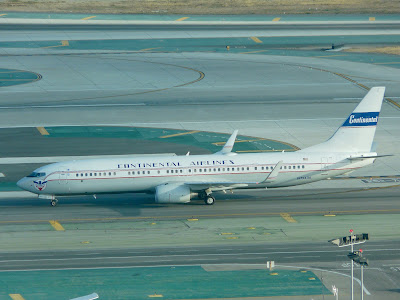 Continental's anniversary livery on a B737-900. The Continental in the previous shot is a B737-800. If United has any special paint schemes, I haven't seen them (not counting the Star Alliance livery, of which Continental and United both have examples)
Posted by CaptainVector at 12:48 AM