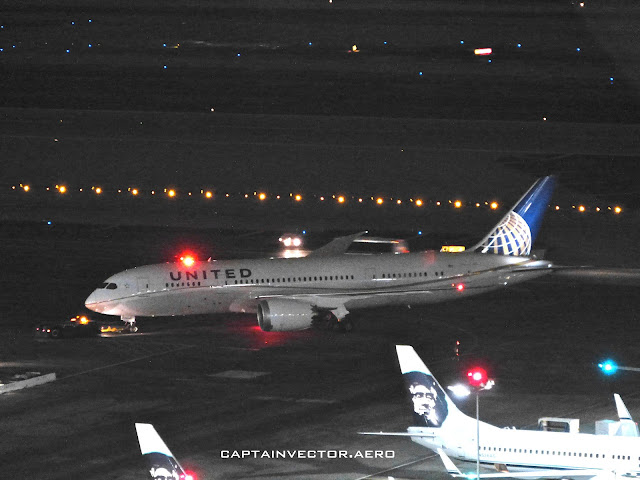 LAX has entered the age of the Dreamliner:  United has introduced the Boeing 787 on a few flights from Houston. So far, they're in the introduction stage, and we're getting one flight late some evenings; thus the dark and grainy photo. The most noticeable traits seem to be the shape of the nose, the upswept wings, and the engine cowlings. I've only personally worked it once so far, so I don't really have any observations about the aircraft's performance. Proportionally, it looks like a B767-200, only larger, and yet smaller than an A330-200. United's initial B787s are configured for 219 passengers; a larger version will come on line later. By comparison, the B767s at United seat between 174 and 244 passengers, depending on variant. United doesn't operate the A330, but at LAX we do see Delta A330-200s, which accommodate 239 passengers. Delta has also ordered Dreamliners, and I believe is currently the only other US airline to have done so, but their aircraft deliveries are still a few years away.
Posted by CaptainVector at 10:10 PM