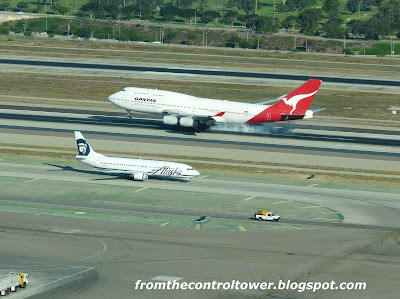 Saturday, 9:31 am LAX time: Qantas 11 touches down on Runway 24 Left
As you have no doubt heard, Qantas has followed in the footsteps of the NBA and "locked out" its employees in response to disagreements with their unions. There are at least six stranded Qantas aircraft on the ground at LAX; so many that the airport was scrambling to find places to put them all. At least one ended up on one of the air freight ramps. The tally includes one A380, two A330s, and three B747s - and possibly more, as these are just the ones I could personally see from the tower.

Late Sunday night update: Qantas has resumed operations, and I got a tally of aircraft on the ground at LAX: A total of nine, including the previously-mentioned A380 and pair of A330s, along with six B747s.
Posted by CaptainVector at 9:31 PM