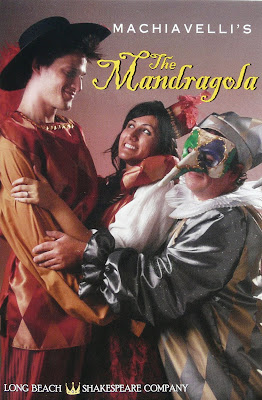 This past weekend, we opened a new production at the Long Beach Shakespeare Company. Our final show of the season is Niccolo Machiavelli's The Mandragola. Machiavelli was born in 1469 (nearly a century before Shakespeare) in Florence, Italy, and is considered one of the founders of modern political science. He served as Secretary to the Second Chancery of the Republic of Florence from 1498 to 1512. The Mandragola dates to 1518, after Machiavelli was exiled by the de' Medici. While it's a funny show, it is somewhat politically incorrect, and not often performed. We believe this production may be the Long Beach premiere of the work. Check out our first review:

Long Beach Press-Telegram review
Posted by CaptainVector at 9:01 AM