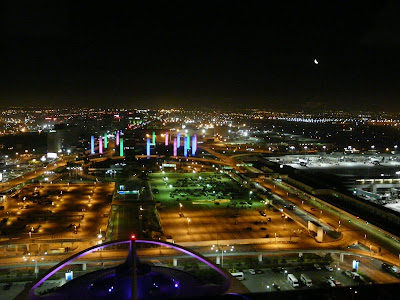 The alarm wakes me from a fitful slumber. Uggh - the sheets are sweaty, and so am I - and I'm the only one in the bed. That's no fun. Despite drawn shades across the new insulated double-pane windows with their special radiation-reflecting glass, the bedroom's position on the west side of the house has allowed the afternoon sun to raise the temperature in the room to over 80 degrees F, even though it's dropped into the lower 60s outside (that's 27 and 16, respectively, for those of you who speak Celsius).

I'm in luck - no line at the In-N-Out Burger. One double-double animal-style, no sauce, extra toasted, and a large drink to go please. No fries, thanks.

I hit the top of the stairs and look around the tower cab. Lotsa folks here tonight, so after checking in with the supervisor and reviewing the R & I (Read and Initial) Binder, I'm assigned to Helicopters. Thus begins another Midshift, my second this week; what other professions refer to as "the graveyard". We try to avoid that term in ATC.

Not as many bodies in the tower cab now as I give the other midshifter a position relief briefing on Local 2. While he and I will be here all night, there a still a few of the swing shifters here for another hour or so. Having gotten in the last wave of late-evening arrivals, we're preparing to go "over ocean" for the night. Citrus is the last west lander; United will be your first on 6 Right. Time for me to take a break downstairs. Checking my e-mail, I find a friend has sent me a CNN article about another controller getting fired for sleeping on the job:


Another friend, a fellow controller in Dallas, has sent another article which I like better:


The hits just keep on comin'. Fast forward a couple of hours:

The waning crescent moon is slowly working its way up from the eastern horizon while the lighted pylons alternate through their Easter colors. The rush of trans-Pacific and Central American passenger flights has departed. The last of the late folks have long since gone home, and the midshift crew soldiers on into the night. Two of our four runways are closed for construction, as are several usually-crucial taxiways. The only thing on frequency is a LAPD helicopter patrolling the area east of LAX, and the next arrival is some thirty minutes away. I open another Diet Coke. This is where passing on the fries earlier pays off: all that starch would be a serious handicap right about now.

Between 2 AM and 4 AM is the hardest stretch at LAX. My compatriot and I try to find things to talk about: The Lakers lost (although I will admit to rooting for New Orleans). Who's bidding out. How various trainees are progressing. Or not. Who's the most likely candidate for the currently vacant supervisor position. Despite having taken a 5-hour energy drink just a couple of hours ago, he yawns. We're not allowed to have unofficial materials in the tower cab, be they magazines, a radio, crossword/sudoku puzzle, or cell phone, as most of the time they would constitute a distraction. Right now, they would be an avenue to keeping some sort of mental function going. So far, no one's called me out on having the camera, so I take a picture of the rising moon.

Time to make a new ATIS. The list of taxiway closures is longer than the weather sequence. Still over four hours until sunrise. One late heavy taxies out for departure, having earlier returned to the gate for some sort of mechanical issue. Their original gate was taken by a waiting aircraft when they taxied out the first time, and so now they're coming out of one of the remote gates at the far end of the airport. It'll easily be a ten-minute taxi or more for them to reach the runway. They're nearly four hours late, and they've still got a twelve-hour flight ahead of them.

The Philippine B747 reaches the end of Runway 25 Left at the same time that Fedex turns a ten-mile final for 6 Right. Fedex would really like to have the south side so that they don't have to taxi all the way across the airport, which costs them several hundred pounds of fuel. To give it to them this time would require the already-late departure to wait some more. Sorry guys, maybe next time: Runway 6 Right, Cleared to Land. On about two or three-mile final, he asks "Verified cleared to land." It's been a long night for him, too. 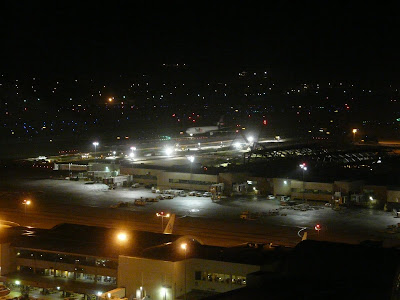 City Ops requests the lights be turned on for one of the closed runways. After a check from one end to the other, he advises that it's now open. Time to make another ATIS. Still another fifteen minutes before our next arrival, another Fedex. He gets to land on 7 Right, after also asking for confirmation of his landing clearance. The supervisor contributes a little to the gossip between yawns. He's run out of paperwork to shuffle. I look at the national weather radar map: There's an ugly line that extends from Lake Charles, Louisiana, across the state of Mississippi to Memphis, Tennessee, and on up into Kentucky. Another weather system runs along the Canadian border from the great lakes to the east coast. I have plenty of time to reflect on the benefits of being in Southern California. The supervisor asks us to check the battery-operated back up radios.

The arrival of the new hourly weather observation spawns yet another ATIS. The first of the day shift arrives, and gives my compatriot a break from ground control. Somebody new to talk to! Like my fellow midshifter, he's a former controller in the Marines; they're both part of our new generation of controllers. We compare notes about our cars, and conclude that automatic transmissions are boring.

The cleaning crew arrives in the tower cab and turns on the overhead fluorescent lights. The glare pretty much means that we can't see out the windows, but there's nothing to see: Our next arrival, another Fedex, isn't due for another twenty minutes. I call the Arrivals controller and tell him that he can run to 7 Right until further notice. We move around the cab to get out of the way of the two-man cleaning crew as they empty trash cans, wipe down all the counters, dust everything, and vacuum. They're working a lot harder than we are: I help push the chairs around.

The cleaning crew has finished, leaving us once again in darkened solitude. But now there are things to do: A gaggle of freighters is arriving at the same time as the first wave of the "pineapple express." The pineapple express is about a dozen passenger flights from Hawaii that all arrive at LAX between 4:30 and 5:30 in the morning: United, Continental, Delta, and American are all straight-in for 7 Right, and have been more or less since they took off four hours ago. Their arrival signals the end of this shift's doldrums. We listen as the arrival controller melds the Fedexes, Mas Airs, and UPSs from the east with the passenger jets from the west. In the midst of all the B757s, B767s, DC10s, MD11s, and heavy Airbuses, is a charter jet with a callsign that none of us recognize. He slows to a crawl on the runway after landing, and tries to make a close call out of what had been generous spacing on final. The parallel runway is still closed, so a last-minute sidestep is not an option to prevent a go-around. He finally clears the runway as the next arrival is over the approach lights, much to the supervisor's consternation. The last thing he wants to be doing at five in the morning is more paperwork. Several pilots ask for wind checks on final, and a couple of them mention that the wind is strong out of the north until just a few hundred feet above the ground.

Our first departure in nearly an hour taxies out. I call down to Arrivals and ask him to put the last two on the north side. As the last 7R arrival rolls out, I load the departure on 25L. At the shoreline, he makes a turn to the south away from the traffic on final for 6R. The sky is beginning to lighten in the east; I can make out the silhouettes of the mountain peaks as Venus, the morning star, rises. The supervisor livens things up by pointing out that we're "in the minutes" - meaning that we have less than an hour to go. We're in the home stretch. 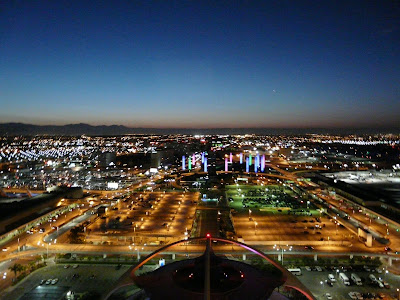 The flight plan printer comes alive and starts printing out strips for the first wave of departures. These are all pretty much headed east to various hubs: O'Hare, Atlanta, Newark, DFW, Memphis, Houston, JFK, Miami. We normally get the strips half an hour before the flight's proposed departure time, so these will all be in the air by six. Ground control has several tugs repositioning aircraft from the maintenance ramps to their assigned gates. My last arrival says he'll exit at H-1, but turns onto G instead. No harm done. Fair's fair: We changed his runway to accommodate a business jet departure and then changed it back again to let him land on the south side once the biz-jet was gone.

My relief plugs in and I start the position relief briefing. Between the last of the pineapple express and overnight freighters, we have a lull before the first of the sunrise departures. We have a checklist for the briefing, and so I get to go into some detail to tell him that nothing is going on. Yet another former Marine, but he's closer to retiring than I am. We chat for a couple of minutes during the required overlap period, and then I unplug and make sure I'm not leaving my favorite pen behind. I greet the incoming morning supervisor at the head of the stairs, and then head down to put away my headset (and favorite pen) and get ready for the final hurdle: The drive home.

Posted by CaptainVector at 12:21 PM