The view from the tower

Most of the photos I use in my entries are taken by yours truly, using a Panasonic Lumix DMC-FZ18 digital camera. I've had the Lumix for a couple of years now; my previous digital camera was an Olympus whose exact model I've forgotten. In both cases, the cameras fell into the "superzoom" category, although the Olympus, being a couple of years older, had a zoom which was a good deal less than that on the Lumix. Nearly all the shots I take and show you here are zoom shots, and I even crop some of those. In keeping with the title of this blog, I thought I'd show you some shots that more closely depict what we actually see from the tower cab.

For this segment, I'm going to show you a sequence of shots, all depicting the arrival of an Air France B777 on Runway 24 Right. They were taken earlier this week, and the time is about 6 PM local DST (Daylight Savings Time). The reported visibility is ten miles. It was a somewhat hazy afternoon, although not sufficiently so to be included in the official weather observation; a pretty good day for Los Angeles in the late spring. Summer time visibility will be worse as the smog builds beneath the inversion layer that is typical for the time of year. None of these are great pictures, as they were all shot from inside the tower cab, through the dirty windows and window shades. No zoom was used, and the lens setting does not change throughout the sequence. 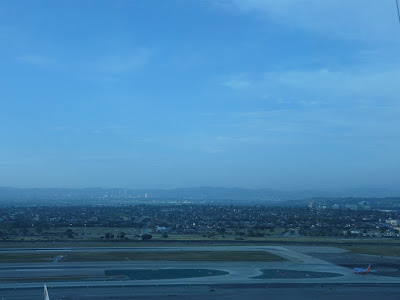 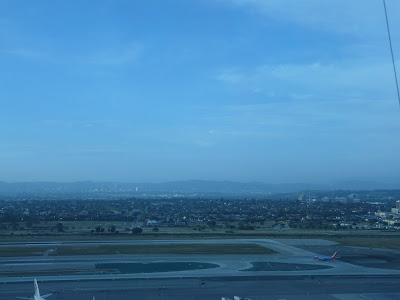 Still on downwind, now descending through about six thousand feet. If you blow up the picture, look about an inch to the right of the previous location. 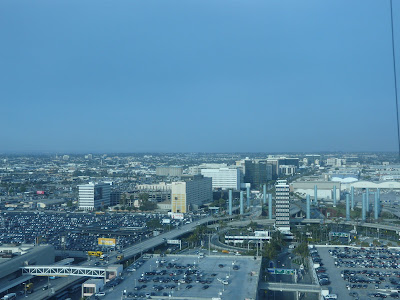 In this shot looking to the east, the airplane has just crossed over the Harbor Freeway and is on a five mile final, straight-in to Runway 24 Right, at about two thousand feet. Look above the black building. 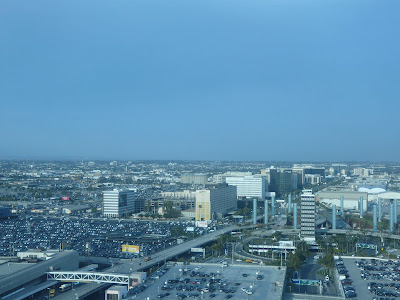 Four mile final. Look above the white building, about halfway up. 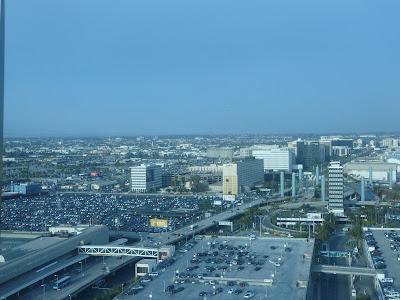 Three mile final. Now can you see it? Go up from the yellow wall of the Radisson hotel, just above the horizon. 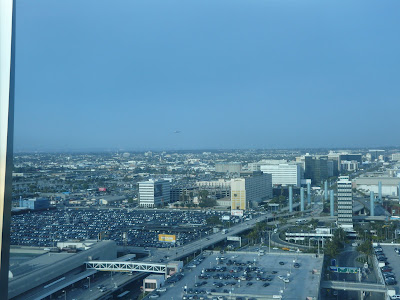 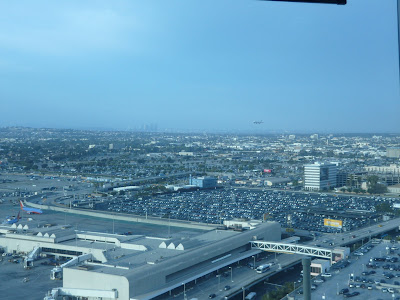 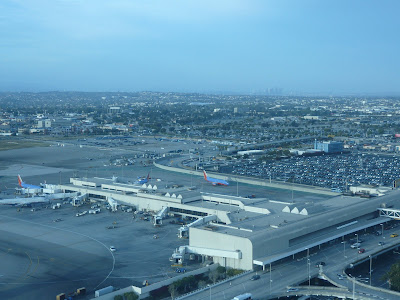 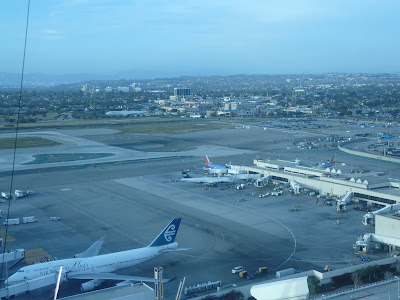 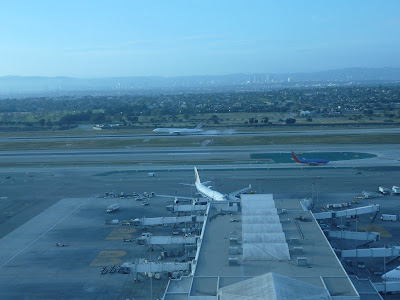 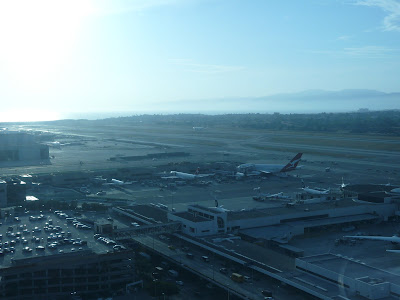 Rolling out on the runway, about to exit at Taxiway AA. You can see the camera lens reflected in the bottom right corner of the shot. The visibility to the west gets difficult thanks to all the glare as the sun approaches the western horizon. This is a problem for the pilots as well. 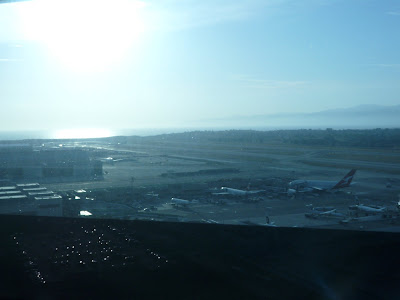 Just finishing the runway crossing, about to turn onto Taxiway Echo. I think I took this shot the day before the Iceland volcano; we haven't seen many Air France jets since. The dark stripe across the lower part of the shot is an extra layer of window tint that cuts glare around the bottom of the tower window shades. Nice for controllers, not so nice for pictures.

This next sequence shows a Virgin America A320 on final, also for Runway 24 Right: 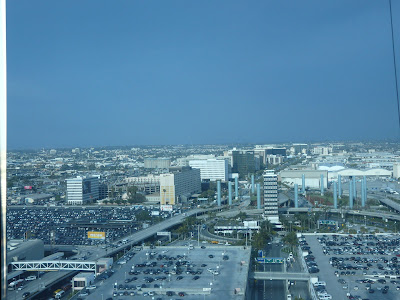 We start with the airplane on a four mile final. 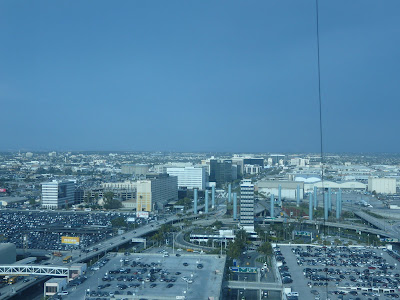 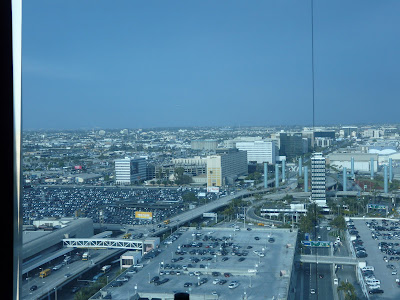 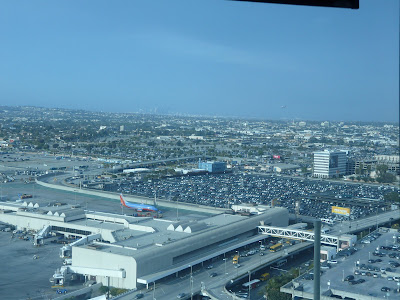 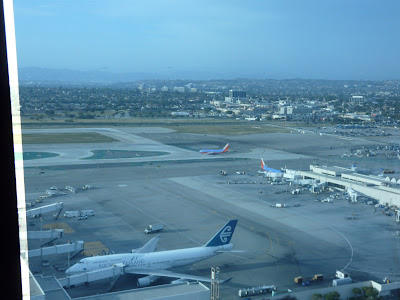 At the threshhold, with Southwest about to depart the parallel runway.

I've got one more sequence for you, this time on the south side of the airport. This is an American B767, arriving on Runway 25 Left: 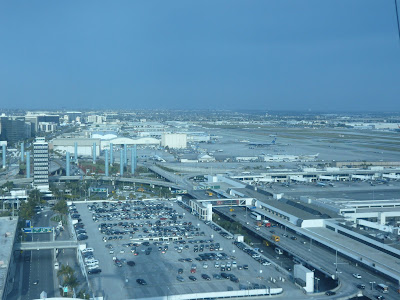 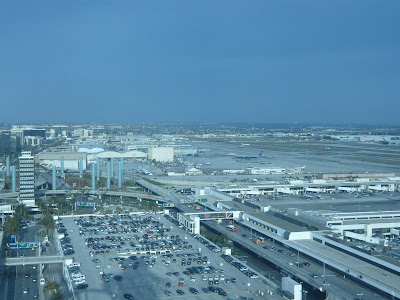 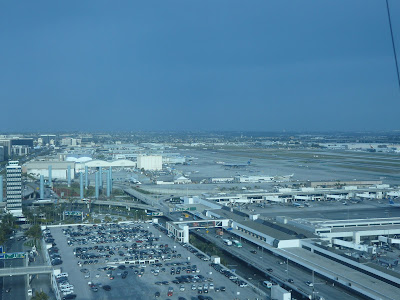 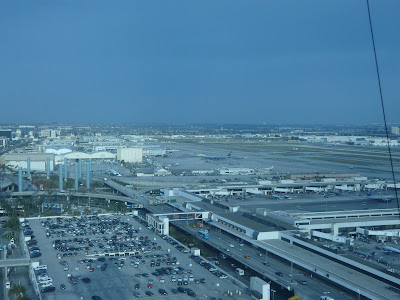 Over the runway, about to touch down. The end of the runway is more than a mile from the tower.

In closing, a gratuitous pair of B757's: 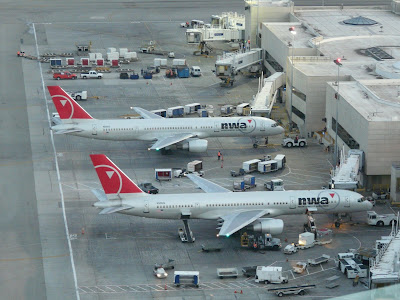 No, this isn't out of my archive - I took this shot on April 15th: Tax day here in the states. The upper aircraft has just arrived, and is getting tugged into the gate. The lower aircraft left an hour or so later, bound for the paint shop in Victorville.
Posted by CaptainVector at 8:24 PM