The Three Mowers; or An Open Letter to Black & Decker: Part 2

In part one, I talked about my Black & Decker rechargeable lawnmower. Its faults, while annoying, are relatively minor, the main one being that it lacks sufficient battery capacity to mow my entire lawn reliably. To illustrate, here's a shot of my backyard taken from the back patio: 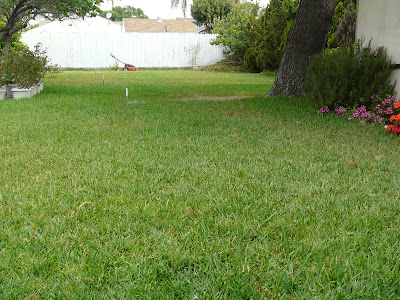 That's the mower sitting along the back fence. The first of the white-top stakes is 25 feet from the patio, and the others are 25 feet apart, with another 15 feet or so beyond the third stake to the fence.
With that in mind, I was attracted to B & D's new follow-on model when I saw it on sale at my local OSH store. It is 36-volt, as compared to 24-volts of the one I already have: 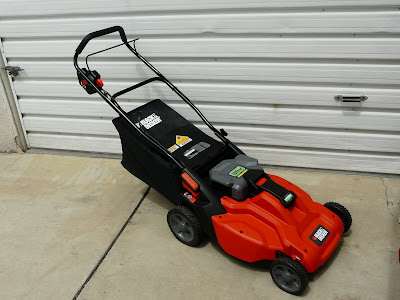 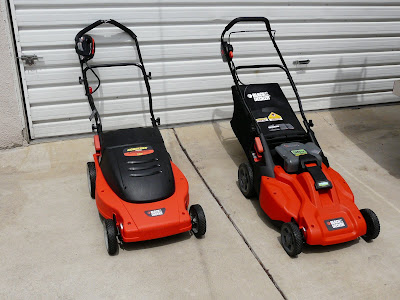 Here the two are together - sizes are comparable

The feature that really caught my eye, though, was the removable battery. It fits into a recess on the top of the mower's housing, and is easily removed: 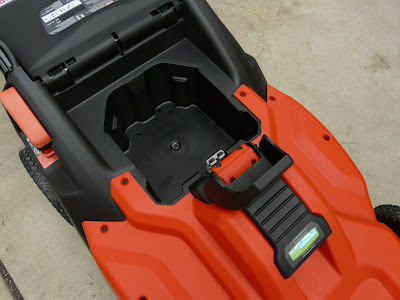 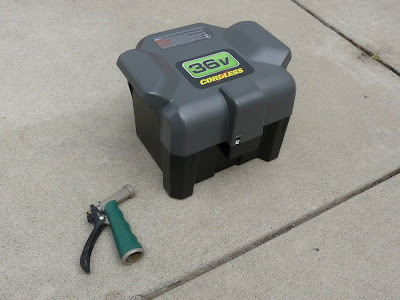 The battery out of the 36-volt mower, next to a garden hose spray nozzle for size comparison. It (the battery, that is!) weighs 25 lbs. Being removable, I could have a second battery to finish the yard when the first one started to get tired part-way though. The battery has its own charger jack; it doesn't have to be installed in the mower to be recharged. 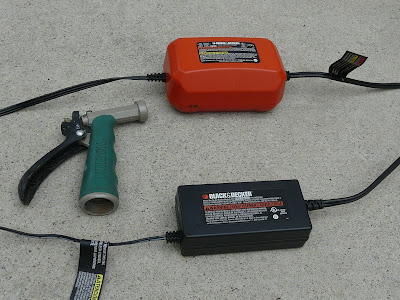 Here are the two chargers: Old orange one and the new black one. I particularly like the decision to put the transformer blocks in the middle of the cords, instead of making them wall-warts that block adjacent outlets. More products should have power supplies like these. 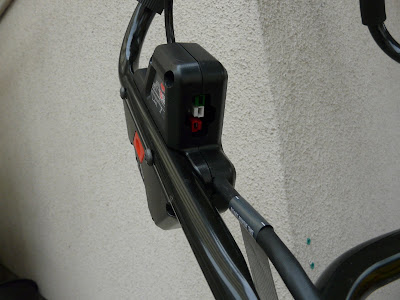 Here is the combined jack for the safety key and the charger. The jack has been re-engineered and the terminals have been color-coded, ostensibly for easier use. As before, this shot was taken from below, which is not a normal viewing angle. From any normal adult stance, the color-coded jack is not visible. Get a passing five-year-old to help you. 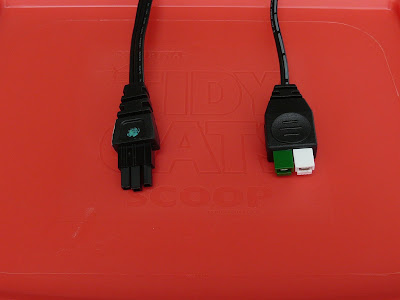 Here are the two charger plugs, the old fiddly one on the left and the new color-coded one on the right. Unfortunately, while it looks better, the new one is still fiddly. The terminals are supposed to only go together one way, but they don't do so easily; you pretty much have to bend down and look at the jack so that you can get the plug connections aligned correctly. Again, a nearby child will have a much better viewing angle. The new model plug also uses a much smaller wire, which I expect will become a failure point. 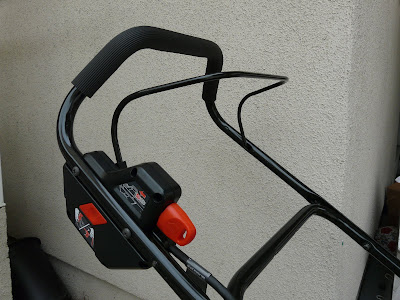 Recalling the finger dance required by the first mower, I was also attracted by what appeared to be a simpler handle/switch arrangement. But, take a closer look: 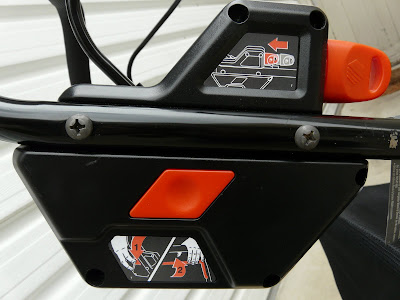 Unlike the old model, the new one takes both hands to operate: 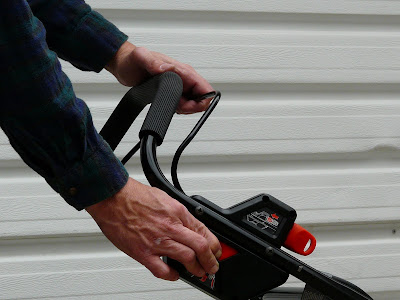 You have to hold the orange button with the right hand while pulling the handle with your left. I missed this little detail, and so when I went to use the mower for the first time, it wouldn't work. Only after I put it away, mowed the yard with the other mower, and then went inside to read the manual, did I realize that what looked like an easier-to-use handle really isn't. And yes, I know (now): There's a label on the lower side of the switch housing, clearly shown in the previous picture, that illustrates the operation of the switch. Keep in mind, though, that the photo was shot from the side of the unit - not from the operator's likely vantage point, from which the label is not visible. 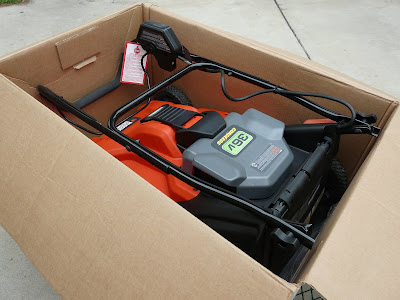 And so, I returned it. The nuisance of the two-handed operation and the not-really-any-better charger hook-up outweighed the theoretical benefit of the replaceable battery. Said battery, by the way, costs $130 from Amazon, and is not immediately available (Usually ships in 2 to 4 weeks, they say.)

This is not meant as a diatribe against Black & Decker; I happily own what probably adds up to be a couple of thousand dollars' worth of their tools. Let me say that I think I understand why Black & Decker made the machine this way; the removable safety key will prevent unauthorized operation. The combined safety key and charger jack reduces the likelihood of mowing over the energized charger cord. One or both of these features might be required - I'm not up on lawnmower manufacturing regulations. The two-handed operation on the handle, however, seems superfluous and was sufficiently annoying that I opted not to keep the mower.

My point to Black & Decker is that I don't think the implementation of the features on this particular product was sufficiently thought-out. If the charger connections have to be made a certain way, and that way only, then a better design would utilize a plug and jack that will accomplish this with less hassle than what I've seen so far. Think of a polarized wall outlet. Or a stereo/video patch cord. Any of those have multiple conductors incorporated into one unit, and all of them will only attach in the intended manner - and they operate easily and simply. The handle/switch design of the first mower is less cumbersome than the one on the second, and can be operated with one hand. The newer model requires the use of both hands - no amputees need apply. Perhaps this mower should be a test for people learning to use a new prosthetic arm/hand. For that matter, I'll concede that the first mower's design might be a challenge for them too.

So come on, Black & Decker; I know you can do better than this. In the meantime, for a back-up mower, I reverted: 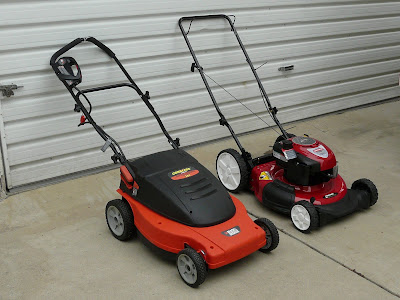 My mower fleet: The original 24-volt rechargeable, along with the gasoline-powered alternate. 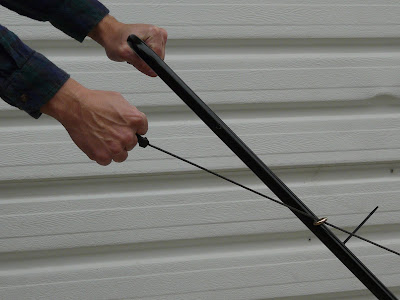 And yes, I acknowledge that the gas mower also requires a two-handed procedure for starting, but that's usual on gas mowers. I expected better from Black & Decker . . .

Posted by CaptainVector at 3:43 PM