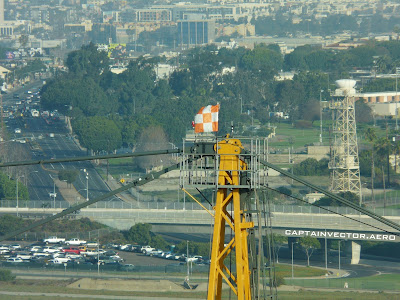 One advantage of having a 200-foot crane right outside our window on the north side of the control tower is that it has a flag mounted at the top. This flag is much easier to see from the tower than the windsock between the runways. But, as you can see in these photos, the flag is blowing the "wrong" way. 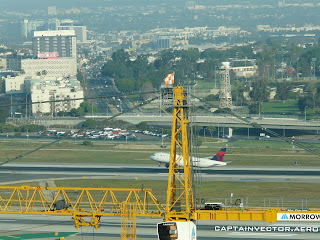 For reference, this is what it's "supposed" to look like: 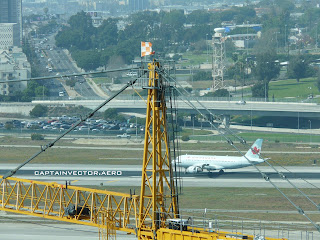 LAX operations can generally tolerate as much as ten knots of tailwind, but earlier this week we had unforecast strong northeast winds gusting well over twenty. Pretty soon, this happened:


Whenever possible, we try to plan ahead for the times when we have to turn the airport around. This involves LAX tower, Southern California TRACON, and Los Angeles Center, along with weather forecasters. The weather folks try to give us a time frame when the winds are likely to become unfavorable, and the various air traffic facilities try to find a spot in the expected traffic flow around that time when we can reverse the flow of aircraft in and out of LAX. This is no small undertaking, as all of the other airports in the region are affected by what the traffic flow is doing at LAX.

But it doesn't always work out that way. Monday evening was one of those times. The weather service insisted that there were not supposed to be strong northeast winds, but the tower was definitely reporting winds far beyond the usual limits for west operation. First we had wind shear reports. Then several aircraft refused to land, several more refused to even accept approach clearances, and still others refused to take off, all due to the winds. So with no real opportunity to pick a good time, we had to do a "battlefield turn" - we're turning the airport, right now. Hurried coordination with approach control to determine who the last west arrivals will be, while the ground controllers scramble to move airplanes from one end of the airport to the other. Extra flight data and clearance delivery positions are opened up to handle all the flight plan revisions. Meanwhile, LA Center is putting aircraft into holding and assigning alternate arrival routes while they wait for approach control to start accepting inbounds. The impact spreads outward across the country, as aircraft still states away start being slowed or held to give the approach control and tower time to get the airspace cleared and the aircraft flows reoriented. To compound the problem, LAX isn't able to handle as many aircraft per hour in an east traffic flow as we can when we're west traffic. This is primarily because we don't have adequate runway exits for east operations. The resulting slowdown can quickly become a national flow control program.

And then, not two hours later, we had to do it all over again when the winds shifted back to the west. At least one lucky trainee got to work both turn arounds. Never a dull moment!

Speaking of trainees, we have three less than we did a month ago. Congrats to CH, SS, and TG, who have all successfully completed their training. Way to go!
Posted by CaptainVector at 9:19 PM