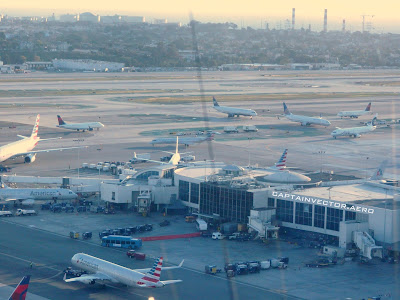 This follow-on to Friday's shot gives a better view of what was happening to create the shot I showed you before the weekend. Essentially, each airplane is waiting on the one in front of it, and the key player to the whole mess is the American heavy seen at the far left. It's pulling onto gate 48B, or at least is supposed to be. The fact that somebody had time to go grab my camera and take these shots tells us that the tug has most likely stopped partway onto the gate -- probably because some piece of ground service equipment is in the way, the jetway is not in the correct position, or the ground crew isn't in place to receive the aircraft. Everything else is a domino effect: the American Eagle CRJ is waiting for the B777 tail to clear the intersection; the Alaska is waiting for the Eagle; the US Air coming off the runway is waiting on United who is waiting for Alaska; the Delta E-jet on the left is waiting for US Air while the Delta E-jet on the right is waiting for everybody.
Posted by CaptainVector at 12:13 PM